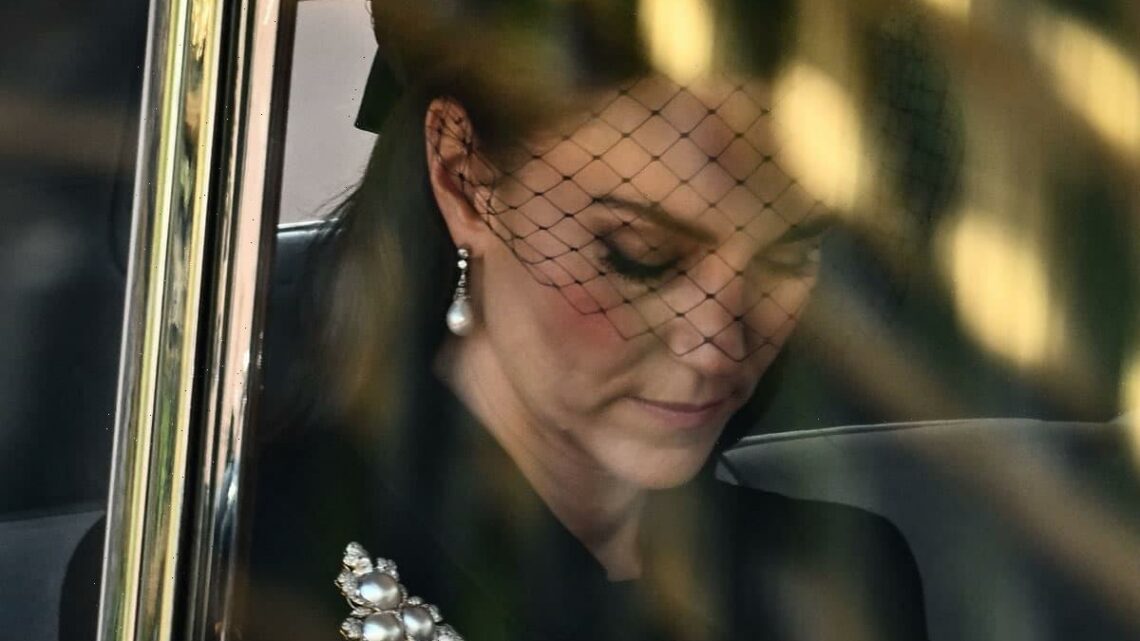 The newly appointed Prince and Princess of Wales joined King Charles III and Camilla, Queen Consort in the procession of the Queen‘s coffin to Westminster Hall on Wednesday.

SEE: Why Princess Kate and Duchess Meghan will wear veils at the Queen’s funeral

A sombre Princess Kate was a vision of ethereal grace as she sported an ebony coat dress and a traditional mourning veil crafted from black netting for the occasion. Holding her composure, the mother-of-three looked effortlessly elegant in the all-black ensemble, adhering to royal mourning protocol. Prince William looked equally smart in military attire.

WATCH: What to expect from Queen Elizabeth II’s funeral

The royal styled her brunette tresses down loose in gently coiled curls and accessorised with a stunning pearl brooch in the shape of a shamrock and some pearl drop earrings for the poignant event, which was also attended by the Queen’s children Princess Anne, Prince Andrew and Prince Edward, and her grandchildren Prince Harry, Zara Tindall, Princess Beatrice, Princess Eugenie, Lady Louise Windsor and Peter Phillips.

Princess Kate’s large brooch is composed of three leaves, each of which are outlined in yellow gold. A sizeable mabe pearl is positioned at the centre of each leaf, which are finished with a scattering of small diamonds. 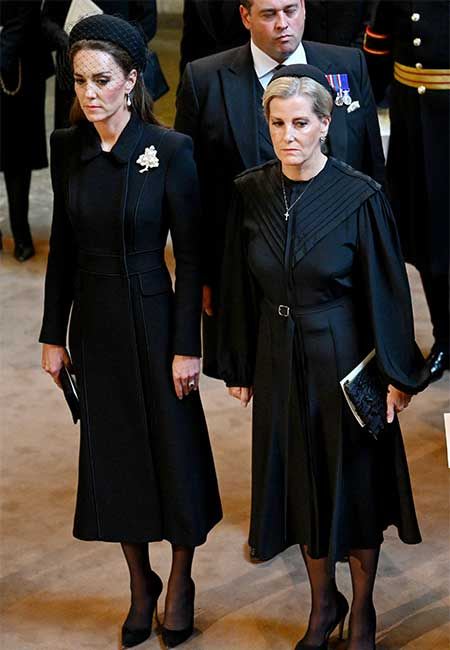 The royal sported a sleek coat dress and point-toe heels

The brooch was a sweet nod to her husband Prince William’s late grandmother. The rarely-seen accessory was previously worn by the Queen during her er visit to South Korea in 1999.

In 2017, Princess Kate donned the eye-catching brooch during a visit to Belgium for the 100th anniversary of Passchendaele, and it has remained in her jewellery box ever since. 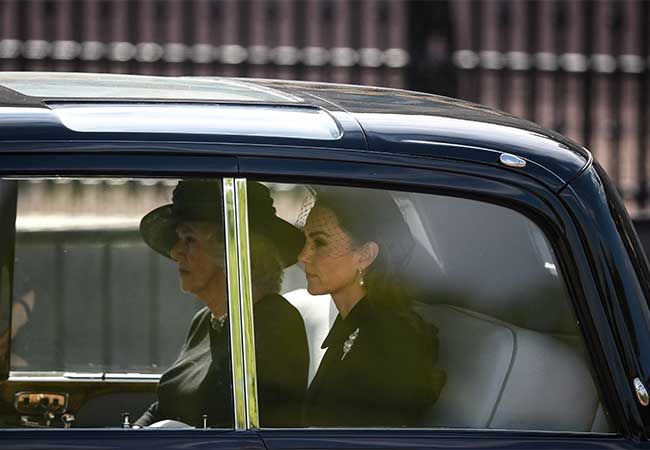 Princess Kate’s ‘Collingwood Pearl Earrings’ once belonged to the late Princess Diana, who received the jewels as a wedding gift.

James Constantinou from Channel 4’s Prestige Pawnbrokers told HELLO! that Princess Diana wore them over a dozen times either dressed up or down, and they have been worn as many times by Princess Kate to official functions. 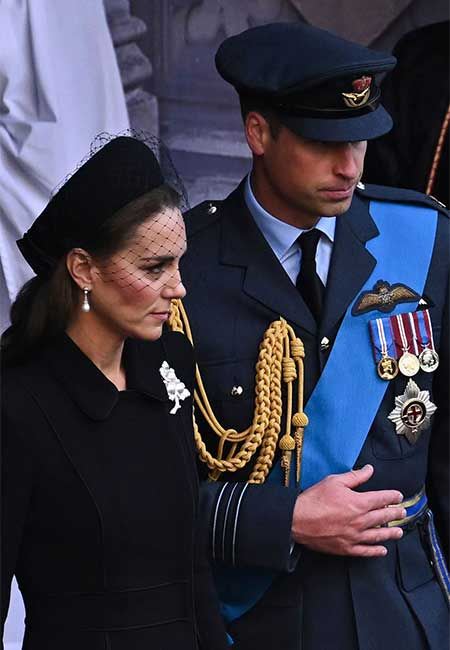 A double diamond drop precedes the open-worked diamond setting from which large pear-shaped pearls are suspended.

Wearing black during a period of mourning is customary for the royal family, a practice deeply rooted in royal tradition as used as a mark of respect for the dead.

We can expect the British royals to wear black from now until seven days following the Queen’s funeral, when “royal mourning” ends.

LOOK: 12 times the new Princess of Wales dressed like her mother-in-law Princess Diana

MORE: Why Kate, the new Princess of Wales, will not inherit Princess Diana’s wedding tiara

Though the style rule is only set in place during the period of mourning, it is up to the bereaved how long they decide to continue wearing black – a tradition thought to have been started by Queen Victoria.

After her husband Prince Albert died, the former monarch only wore black for the remaining 40 years of her life. 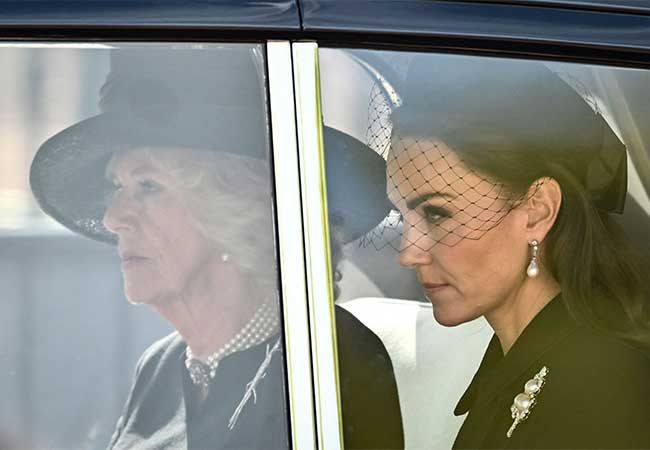 The mother-of-three accompanied Camilla, Queen Consort, during the journey

Her Majesty Queen Elizabeth II passed away “peacefully” at Balmoral at the age of 96, and her children Princess Anne and King Charles are thought to have been by her bedside at the time. The former has been by the monarch’s side ever since, following her coffin to the Palace of Holyroodhouse by car, and joining her on her flight to London.

RELATED: The Queen’s top fashion moment remembered – and it was huge

Make sure you never miss a ROYAL story! Sign up to our newsletter to get all of our celebrity and royal news delivered directly to your inbox.

Don't get caught out by the international break – use your September transfers! | The Sun
World News