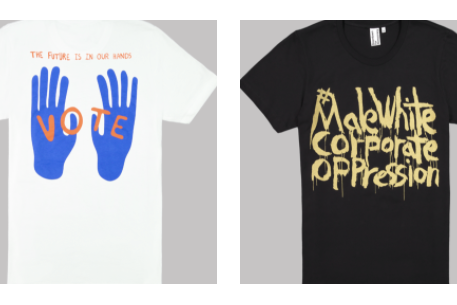 Downtown for Democracy is going the route of artist-designed T-shirts to shore up its progressive political efforts for the upcoming presidential election.

The nearly 20-year-old political action committee, open in its dedication to getting President Trump out of the White House and getting more Democrats and progressive politicians in the U.S. Congress and Senate, has brought on a number of well-known artists to design protest shirts. These include musician Kim Gordon, best known for her decades fronting Sonic Youth, along with designer and photographer Marc Hundley and twin sculptors The Haas brothers, among others.

For Nikolai and Simon Haas, both said the decision to participate in Downtown’s efforts was “easy.” And the design of their shirt — two large blue hands with “Vote” across them and “the future is in your hands” above — was easy as well.

“I’m fearful of the fascistic path our current President is taking us down and as artists we have a responsibility to use our art to further what we believe in,” Simon Haas said.

But the two differ a bit on how effective a T-shirt is or can be when it comes to politics and getting people to vote, when roughly half of the country has chosen not to vote in every presidential election since the early Seventies.

Nikolai, who seems particularly impassioned about people’s individual responsibility to vote, said protest T-shirts won’t work on their own, “but if they are being worn by a courageous or admirable person with something to say, I think they will definitely spark or guide a conversation to a place that could absolutely change someone’s mind.”

Simon, on the other hand, said if he wasn’t planning on voting and then saw someone he “admired/had a crush on/was in a conversation with wearing this shirt, I hope it would spark something in my brain like, ‘oh, they’re voting. Maybe I’m lame for not.’”

At the very least, he hopes it “starts a conversation, or maybe it’ll just remind someone that they forgot to fill out their mail-in ballot. Putting the message out can’t do any harm and it’s got a lot of potential to do good.”

Other shirts from the additions to Downtown’s site are a bit more pointed in their political statements, not that either Haas brother is shy in saying they are hoping for Joe Biden and Kamala Harris to win in November. But Kim Gordan’s shirt says simply “White corporate male oppression” in gold paint lettering, while artist Barbara Kruger’s design shows a photo of the U.S. Supreme Court building with the words “White man’s best friend” over it. Rebecca Pauline Jampol’s is a simple white T-shirt with block lettering reading “Abortion is normal.” All are for sale on Downtown’s site.

A shirt aiming to simply urge people to vote is relatively tame.

But voter turnout is a major focus of Downtown this election cycle. Sales of the shirts are directed to media buys in swing states aimed at boosting voter turnout, and then direct donations to various groups. Last year Downtown said it donated $235,000 among nine groups. During this election, the committee said it will spend at least $250,000 on voter mobilization.

As for how they think the election will turn out, both Haas brothers, originally from Texas and now based in Los Angeles, are hopeful but not deluded into being certain that the election will go one way or the other.

“I see the world moving past COVID-19 and past this treacherously sad political moment into growth and beauty,” Nikolai said. “If we slip into another four years of this insanity I’m dedicated to America and to do my part to bring it back to health.”

Similarly, Simon said, he’s “made peace” with the possibility that the election may not go the way he would like. “Either way I plan to stick around and do what I can to fight for what I believe in.”