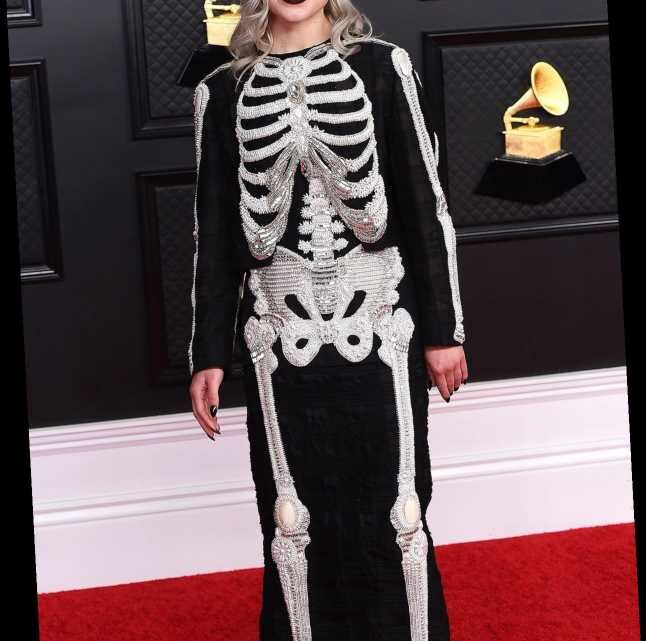 The singer, who's nominated tonight for best alternative album, best rock song and best rock performance, arrived at the 2021 Grammys in an embellished red carpet version of the spooky motif.

"I wear a skeleton costume all the time but one of the reasons I do is because I saw this Thom Browne dress forever ago and thought it was so cool. And I asked for it. I basically stole it," Bridgers, 26, quipped during a stop on E! Live from the Red Carpet.

The Thom Browne look she wore on the carpet features a cardigan jacket and skirt in black tulle trompe l'oeil tweed with crystal and pearl skeleton embroidery.

The star often wears more casual skeleton-adorned clothing, including hoodies, socks, T-shirts and catsuits, and even wore one in the music video for her song "Kyoto."

Check out PEOPLE's full Grammys coverage to get the latest news on music's biggest night.

The 63rd Annual Grammy Awards will air live from coast to coast and highlight the past year's best songs and albums from an array of artists across every genre, while also showcasing a slew of noteworthy performances.

From Beyoncé and Taylor Swift to Harry Styles and DaBaby, a bunch of stars are nominated for awards at the annual music event, which is being touted as "quarantine-friendly and partly virtual," amid the ongoing COVID-19 pandemic.

Beyoncé leads the list of nominees with a total of nine, followed by Swift, Roddy Ricch and Dua Lipa with six nominations each.

Taylor Swift, Lipa and Roddy Rich are set to take the stage (virtual and otherwise) for the 63rd annual awards show, alongside Eilish, Megan and DaBaby, who will also perform.

Joining them on the list of performers are Bad Bunny, Black Pumas, BTS, Cardi B, Brandi Carlile and Doja Cat.