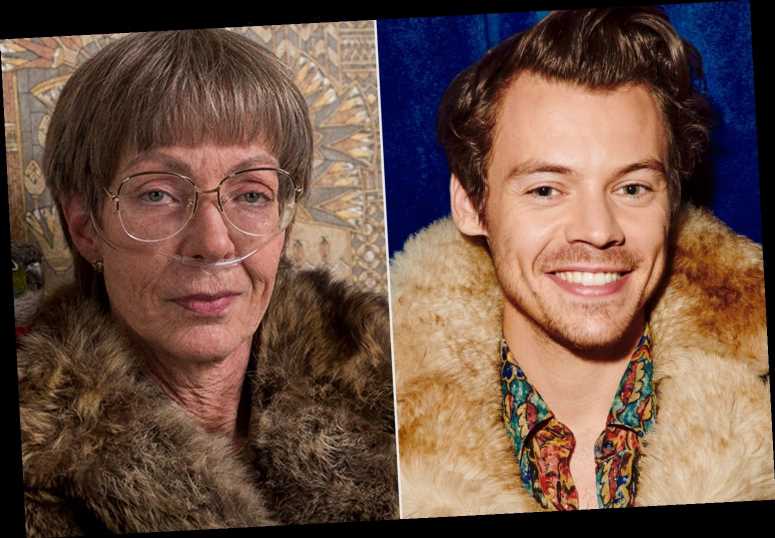 Olivia Wilde is here for the Harry Style memes.

This week, the actress and director, 37, weighed in on a new meme that depicted her current boyfriend, 27, and actress Allison Janney wearing fur coats.

In the humorous Instagram post by writer Evan Ross Katz, which was highlighted by Comments by Celebs, both stars flashed a smile for the camera while posing in similar outfits. One image showed the "Watermelon Sugar" singer in a faux-fur coat from a Gucci's new campaign, while the second was a shot of the 61-year-old actress from the 2017 film I, Tonya.

"Need a cinematic universe where it's Harry Styles and Allison Janney in bulky fur coats. We can figure out plot details at a later date," Katz captioned the shots.

As for her own response to the meme, Wilde summed up her feelings with one emoji: a crying with laughter face. Styles' photo is from a new campaign for Gucci's Beloved Lines, which was shot by Spring Breakers filmmaker Harmony Korine.

The campaign, which will debut on April 22, features an "eclectic pack of influential and renowned stars," including Awkwafina, Dakota Johnson, Diane Keaton, James Corden, Serena Williams and Sienna Miller, according to a press release.

"It will spot a light on the Gucci Beloved Lines, the accessories enamored by the House and their wearers, a reference to the House's past and the way it defines its now," the release states.

RELATED VIDEO: Olivia Wilde and Harry Styles Seen Holding Hands as Source Says 'They Have Dated for a Few Weeks'

Back in February — weeks after the pair were first seen holding hands at a friend's wedding — Wilde penned a sweet note in honor of Styles, who stars in her upcoming movie, Don't Worry Darling.

In the caption, Wilde noted that many male actors don't want to appear in female-led films and take the lesser role, which makes those movies hard to finance. But Styles jumped in without reservation to play backup to Florence Pugh's leading role.

"No joke, it is harrrrrd to find actors who recognize why it might be worth it to allow for a woman to hold the spotlight. Enter: @harrystyles, our 'Jack,' " Wilde wrote alongside a black-and-white shot of Styles. "Not only did he relish the opportunity to allow for the brilliant @florencepugh to hold center stage as our 'Alice', but he infused every scene with a nuanced sense of humanity. He didn't have to join our circus, but he jumped on board with humility and grace, and blew us away every day with his talent, warmth, and ability to drive backwards."

In February, a source told PEOPLE the two "seem very serious" and "spend all their time together" while they shot the upcoming film in Los Angeles. The film is Wilde's highly-anticipated sophomore directorial project which she also stars in.

"She is also very happy with Harry," added the source.