Home » Fashion » Mum’s strict 17-rule contract for her son, 12, having a phone includes ‘no messages before 7.30am’ and ‘ALWAYS answering your parents’

Mum’s strict 17-rule contract for her son, 12, having a phone includes ‘no messages before 7.30am’ and ‘ALWAYS answering your parents’

DECIDING when to let your child have a mobile phone can be a tough decision.

But one mother, who has allowed her 12-year-old son to have a mobile phone, has devised a genius way to ensure he uses the device in a safe and healthy manner.

Mel Watts, also known as The Modern Mumma, has created a 17-rule contract which her son Ayden must abide by if he wants to carry on using his new mobile.

The mum-of-four has even categorised the contract – explaining if her son breaks one of the more severe rules (listed in bold), the phone will immediately be banned.

Mel has shared the document on her blog with the hope it might help other parents in similar situations.

She wrote: "This piece of paper pretty much gave us the ability to put down some ground rules and also allow us to monitor what he’s doing. 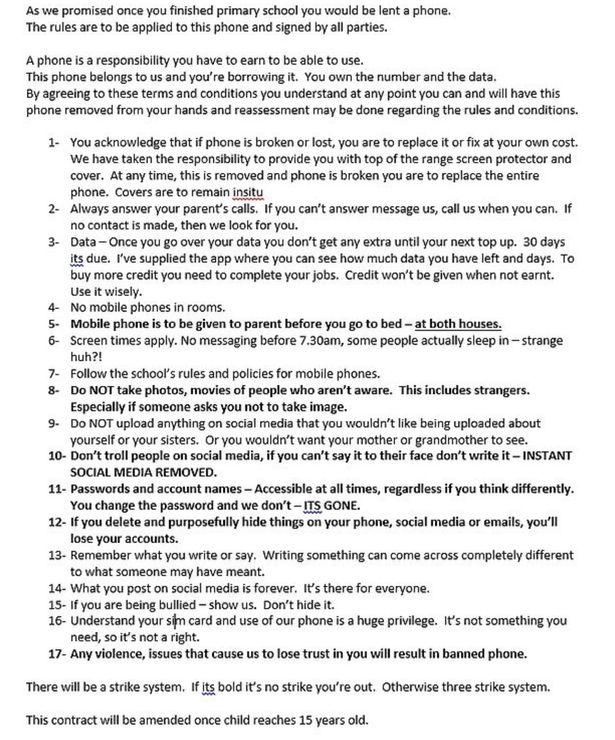 "To be honest no I don’t think we should be giving our younger teenagers mobile phones with social media however I didn't want to be that parent who wouldn’t allow it.

"I grew up with parents who didn't allow me to have a phone and I did feel isolated and left out, it wasn’t a nice feeling."

The contract states: "As we promised, once you finished primary school you would be lent a phone.

"The rules are to be applied to this phone and signed by all parties.

"1. You acknowledge that if the phone is broken of lost, you are to replace it or fix it at your own cost. We have taken the responsibility to provide you with a top of the range screen protector and cover.

"2. Always answer your parents' calls. If you can't answer, message us, call us when you can. If no contact is made, then we will look for you.

"3. Data – once you go over your data you don't get any extra until your next top up… I've supplied the app where you can see how much data you have left.

"4. No mobile phones in rooms.

"5. Mobile phone is to be given to a parent before you go to bed – at both houses.

"6. Screen times apply. No messaging before 7.30am, some people actually sleep in – strange huh?!"

"7. Follow the school's rules and policies for mobile phones.

"8. Do NOT take photos, movies of people who aren't aware. This includes strangers. Especially if someone asks you not to take an image.

"9. Do NOT upload anything on social media that you wouldn't like being uploaded about yourself or your sisters. Or you wouldn't want your grandmother or mother to see.

"10. Don't troll people on social media, if you can't say it to their face don't write it – INSTANT SOCIAL MEDIA REMOVED.

"11. Passwords and account names – accessible at all times, regardless if you think differently. You change the password and we don't – IT'S GONE.

"12. If you delete and purposefully hide things on your phone, social media or emails, you'll lose your accounts.

"13. Remember what you write or say. Writing something can come across completely different to what someone may have meant.

"14. What you post on social media is forever. It's there for everyone.

"16. Understand your sim card and use of our phone is a huge privilege. It's not something you need, so it's not a right.

"17. Any violence, issues that cause us to lose trust in you will result in a banned phone.

"The contract will be amended once the child reaches 15 years old."

After sharing the contract on Facebook, parents were quick to praise Mel for the idea.

One wrote: "Love this!! Well done to you guys as parents."

While another commented: "This is amazing!! So nice seeing parents take responsibility!

"I’m a secondary school teacher and the amount of damage I see caused my phones is crazy… social media bullying and trolling, kids not sleeping or doing HW coz they’re texting/phoning at all hours of the night.

"Kids don’t know how to use them safely because no one has explained it fully to them and parents don’t take responsibility of something that is hugely dangerous like actually taking it off them before they go to bed!

"Can have a huge impact on their mental heath too and it’s so sad to see! Well done you & all supportive parents."

Earlier this week, we told you about the sassy tot who went viral after telling her mum how she put a classmate in a headlock because he asked her to marry him.

We also revealed one couple have been branded ‘morons’ for their ‘crazy’ name for baby daughter.