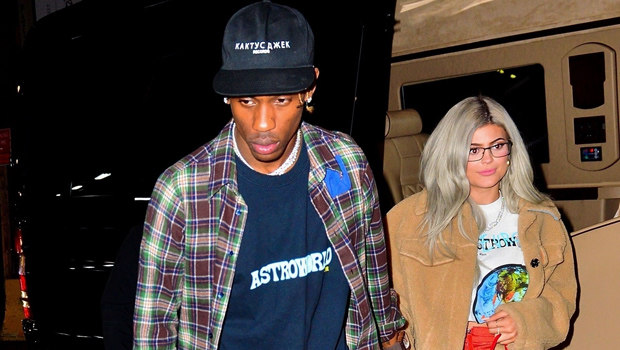 Kylie Jenner and Travis Scott enjoyed a night out after daughter Stormi’s birthday party! Check out the pic inside of Kylie’s red thigh-high slit dress!

They had quite a long day! Kylie Jenner, 21, and her longtime boyfriend, Grammy-nominated rapper Travis Scott, 26, attended the Clive Davis And The Recording Academy’s Annual Pre-Grammy Gala the same day they celebrated one-year-old daughter Stormi Webster‘s birthday! The parents attended the glamorous event at the Beverly Hilton, and looked absolutely stunning as the power couple that they are.

Kylie wore a strapless red dress that accentuated her tiny waist. The gown had a thigh-high slit which showed off the entirety of her right leg, looking even longer with skin-toned pointed high heels. Her legs look toned and went on for days! Kylie looked absolutely phenomenal.

Her hair was parted to the side, and she wore a matte red lipstick to match her dress. Kylie had on her long lashes and a standard brown eyeshadow look, and she rocked long muted baby pink nails. The reality star and makeup mogul posted two selfies on Instagram before the big event, simply captioning the ‘grams with a black heart. While Kylie skipped out on the red carpet, she did attend the party with Travis.

Earlier in the day, Kylie and Travis hosted a huge party for their only daughter. Kylie shared on Instagram a video of her and little Stormi entering the party, which included a huge inflatable blow-up of Stormi’s face. The party was inspired by Travis’ album Astroworld, but the party was, of course, Stormiworld.

The parents seemed to not be too worn out from the party earlier in the day to attend a fancy Grammys gala to celebrate the best in the music industry right now. Travis, who’s nominated for Best Rap Performance and Best Rap Song for “Sicko” and Best Rap Album for Astroworld was likely grateful to be surrounded by family leading up to the big award show! We can’t wait to watch the big event on Feb. 10 and see if he takes home any awards!