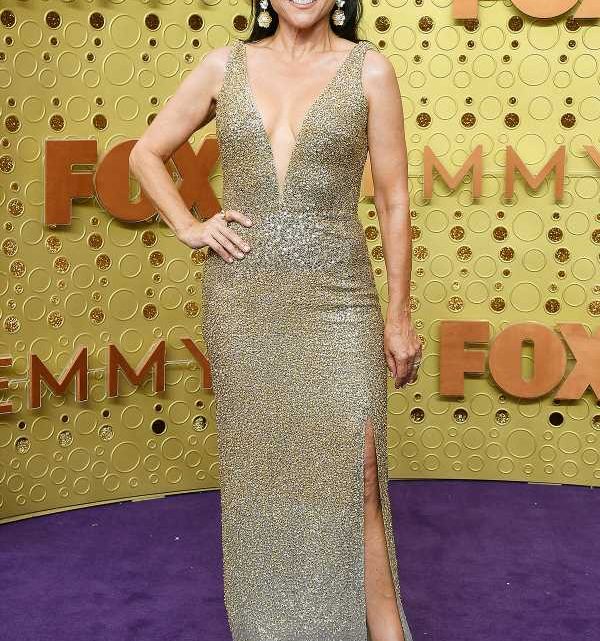 Julia Louis-Dreyfus sparkled from every angle at the 2019 Emmys.

The Veep star, who’s nominated for her seventh Emmy for her role as Selina Meyer in the HBO hit series, walked the carpet in an embellished high-shine gold gown featuring a plunging neckline and high slit. She teamed the look with matching strappy gold sandals, drop earrings and her hair styled down, worn behind her ears.

While she’s no stranger to the event (she’s been nominated 19 times and won 11!) this is a particularly big night for Louis-Dreyfus, 58. She could potentially beat her own record if she picks up the win for Outstanding Lead Actress in a Comedy Series. She set a record back in 2017 for most wins for a performance in the same role for the same series, when she won her sixth trophy, and tonight could be her seventh.

Veep was not nominated in last year’s Emmy Awards ceremony because the show postponed production on the final season after Louis-Dreyfus was diagnosed with breast cancer in September 2017 — just days after the Emmy Awards, where she had taken home a trophy.

She announced the news through social media. “1 in 8 women get breast cancer. Today, I’m the one,” the actress wrote. “The good news is that I have the most glorious group of supportive and caring friends, and fantastic insurance through my union. The bad news is that not all women are so lucky, so let’s fight all cancers and make universal health care a reality.”

She is now in remission, and credits her hit show for lifting her spirits during her health battle.

“I’ve had a lot of personal challenges, losses, dear ones in my family, my own battle with cancer,” Louis-Dreyfus told Entertainment Tonight at the HBO For Your Consideration event in August. The actress added that she doesn’t know how she would have dealt with everything “had I not had this really close intimate relationship with all of these people.”

“We linked arms and we tried to do the most joyful funny thing possible as a team,” she continued. “It was like being on a sports team … and that was the most buoying thing, to constantly be coming back to. It really helped me.”

In April, she opened up about her battle with PEOPLE and the role her series played in her recovery. “During my illness, we had a bunch of table reads and stuff, so we were sort of always together. But first day on set, God, we got into it right away,” she said. “It was pretty packed with a lot of language and stuff like that, and … I would say it was lovely. It was like getting back up on a horse. ‘Oh, yeah. I remember how to ride this thing.’ “

The 71st Primetime Emmy Awards are airing live from the Microsoft Theater in Los Angeles starting at 8 p.m. ET/PT on Fox.