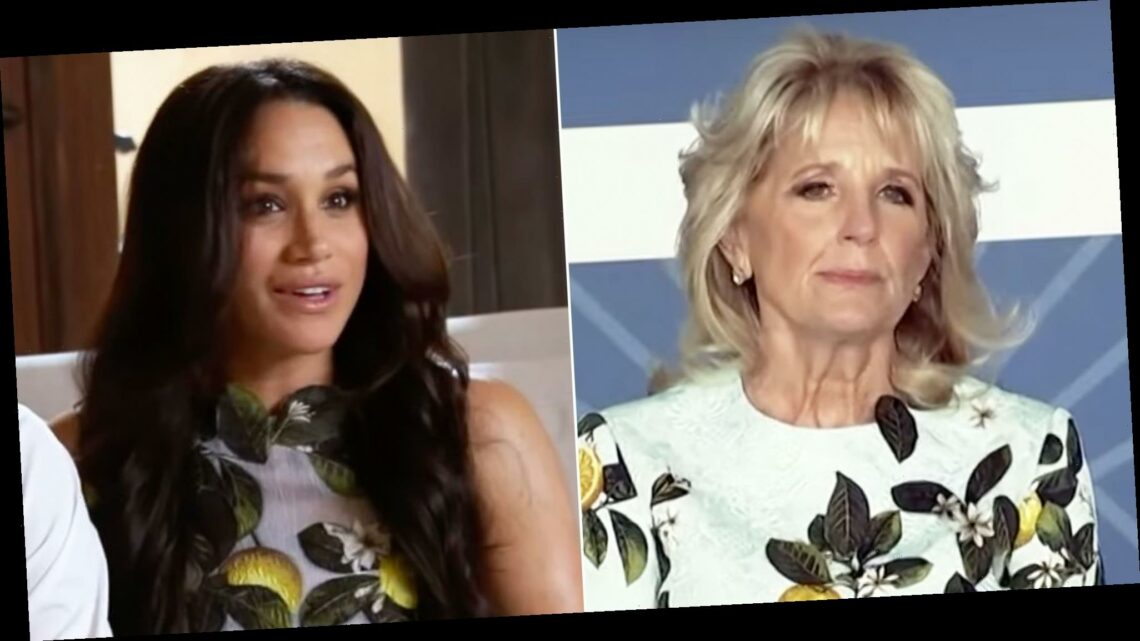 Double take! Dr. Jill Biden is spending March 8 celebrating International Women’s Day by sharing a few remarks at the State Department’s International Women of Courage Award ceremony. And while her speech was amazing (more on that later), it was the very familiar looking dress she chose for the appearance that caught our eye.

For the event, the 69-year old First Lady wore an Oscar de la Renta lemon print belted midi dress — which she paired with a matching face mask and yellow pumps — that is basically a doppelgänger for the one Meghan Markle, 39, wore for Spotify’s Stream On event, which aired on February 22.

Markle’s Oscar de la Renta number was a flowing shift variation in a linen material, whereas Biden’s was more structured and made of cotton and viscose. But both influential women embraced the same springy pattern and lemon appliqué.

Take a Look Back at Meghan Markle’s Maternity Style

This twinning coincidence certainly has Us wondering if great fashion minds just think alike or if there’s a hidden meaning behind the matching moment, especially given that Markle’s CBS tell-all interview aired the day prior to FLOTUS’s appearance.

Another chimes in with: “Nice to see our @FLOTUS give a nod to #MeghanMarkle by wearing a dress like what she wore in the Spotify trailer.”

While it’s unconfirmed if the First Lady’s style for the day was an intentional choice to support Markle or completely serendipitous, one thing is for certain: Biden is in support of uplifting other women.

During her 7-minute speech, she helped honor 21 fearless women from around the world who have made strides in peace, gender equality, human rights and, of course, women’s empowerment.

“When we hear of the stories of the women we honor today, it’s easy to think of them as mythical heroes or angels among us. Perhaps, touched by the gods or chosen for greatness. What else could explain such herculean acts of fortitude and fearlessness,” Biden says in her speech.

She continues: “Courage isn’t really found. It doesn’t conjure away our doubts. It’s an intentional decision made … It’s knowing that your feet may falter and choosing to walk forward.”

And to honor these women who have shown such courage around the world, Biden promises that the United States will stand with them. “We will make the choice to lead, to be bold and to lift up women and girls everywhere who light our way,” she says.