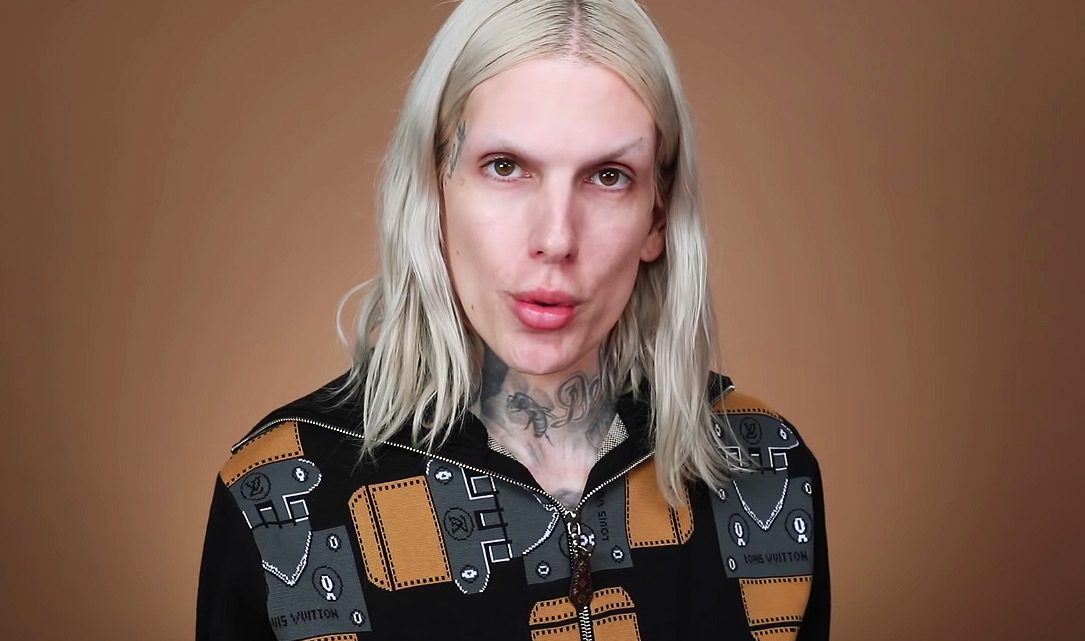 WARNING: GRAPHIC PHOTOS AND VIDEO FEATURED IN THE ARTICLE BELOW

Throughout his past 15+ years on YouTube, beauty guru Jeffree Star has always kept things real with his followers. Now, he’s opening up about the botched lip fillers he got and his journey to fixing the damage.

Star, 33, revealed that 10 years ago, a doctor injected him with “allegedly two syringes” of silicone in his top and bottom lip without his knowledge or consent. “I was botched. Ten years ago I discovered fillers. I really wanted fuller, bigger lips. I used to work at M.A.C Cosmetics a long time ago, and one of the girls there had huge lips. I was mesmerized, girl!” the beauty guru said at the start of his tell-all video, which already has more than 6.4 million views.

“She gave me the number to a doctor down the street [in Beverly Hills]. I went to this doctor and I asked for Juvéderm. [Juvéderm is a temporary hyaluronic acid-based injectable that can last from approximately 4 to 12 months.] It is supposed to go away over time and adds volume to things,” Star continued.

After the injections, Star didn’t notice much different in his face besides his more voluminous lips. But after a few years, he realized something was not right.

“Here’s where it gets really shitty. I discovered that this doctor had mixed silicone with Juvéderm. I never asked for that. I never knew he was doing this. I really don’t know why this person did this,” Star said. “I don’t regret much [in my life]. I regret ever meeting that doctor. I regret going into his office and I regret ever letting him touch my face.”

Silicone, a non-temporary liquid injectable, is less expensive to use than hyaluronic acid-based ones like Juvéderm, and very controversial in the medical community. “It’s a permanent material which can cause inflammatory reactions and scarring both which can lead to infection,” N.Y.C. board-certified cosmetic surgeon and The I.V. DOC CEO Dr. Adam Nadelson tells PEOPLE. “It’s FDA approved for treating retinal detachment in the eye, but used off-label as a filler for permanent results, which is why the controversy exists.”

Side effects include lumps, ridges and bumps, which Nadelson says require surgery to remove and “can be extremely challenging” to do. “A patient [getting fillers] should ask their doctor what product is being injected and to  see the pre-filled syringe or vial being used,” he adds.

Star himself experienced noticeable bumps on the inside of his lips “for years and years now.” He explained, “You probably have noticed weird things when I smile. It has made me insecure. It has embarrassed me. It has made me feel weird when I do photo shoots. It is something that has haunted me for a long time.”

For years, Star turned to a different cosmetic dermatologist, Dr. William Kirby, to use more temporary fillers to “mask” the silicone lumps. But he realized as he got older, the lumps were “getting worse and showing more.” So he took his followers along as he went to Kirby to undergo surgery to get all the silicone removed.

When Star went into his doctor’s office for the surgery, Kirby examined his mouth and pointed out exactly where the silicone had been sitting for 10 years.

“I can clearly see a line of demarcation where you can actually see where the injector went injection, injection, injection,” Kirby said. “I have every reason to believe that is pure silicone right there because you’ve had it for at least a decade.”

Luckily, Kirby said the injector only filled Star’s lips with the silicone at a “superficial” level, which meant it would be slightly easier to remove than if it had been deep in the lip and intertwined with the vessels and nerves.

Although Star admitted he was nervous about the pain and swelling from the lip revision, he still knew he was ready to go through with the removal.

Kirby marked Star’s lips with a Sharpie marker and then cut into each section with a scalpel. Once the lip was cut open, the doctor carefully trimmed out each bit of silicone. He finished with a few stitches to close the incision. Star was awake for the entire procedure.

After the removal, Star sent the substance to a lab to confirm it was in fact silicone. He experienced some swelling for a week, but other than that, he said he “feels great.”

By day five following the procedure, Star was already feeling back to him normal self and wearing full-on glam. “The stitches have started to come out which is great,” he said. “I’m healing very quickly.”

Ultimately, he warned his followers about the risks of getting injectable fillers. I hope if you’re watching this you do your research before. Please do your research,” Star said. “It has hurt me in a way I didn’t know it could.”

Paul Schrader’s Next Film: A Western Remake As ‘If Malick and Lynch Took a Shit on the Script’