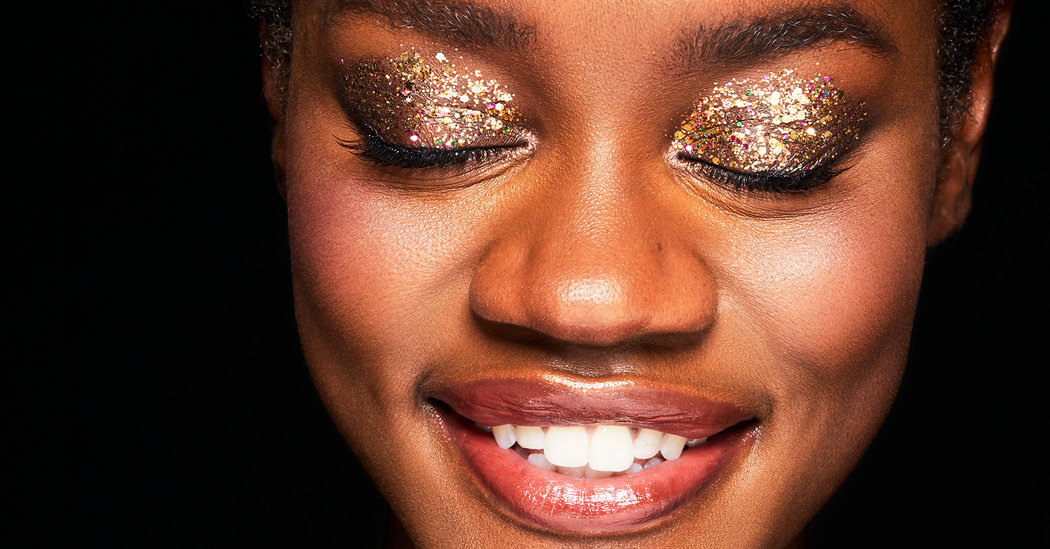 Merriment was in the air on the fall runways with eyes glittering with metallics at Marc Jacobs and Jill Stuart, gold leaf at Akris and crystals at Kate Spade. With all the sparkle, it was easy to imagine the models all partying together at a splashy holiday bash.

Fast forward several months, and we’ve figured out how to bring that runway shine to looks you can wear during your in-real-life party season. The makeup artist Nick Barose, whose clients include Rachel Weisz, Lupita Nyong’o and Gugu Mbatha-Raw, is known for his surprising and pretty use of color and texture. Bottom line: We trust him on this topic.

“It’s about balance,” Mr. Barose said. “Think about makeup elements in terms of balanced levels of drama.” If the eyes are popping, the rest of the face should be less emphatic. Brows, which you may normally darken, might be filled in lighter than usual.

Mr. Barose is very clear, though, that balancing sparkly eyes does not mean nude lips. In fact, just no nude lips.

“People are doing beige lips with everything, and it’s getting really boring,” he said.

Here, Mr. Barose designed three merry and bright looks, and we walk you through how to recreate each one. And because the goal is balance, the hairstylist and colorist Jehnna Mahoney, who did the hair, has a few tips on achieving it when your eye makeup is the main event. 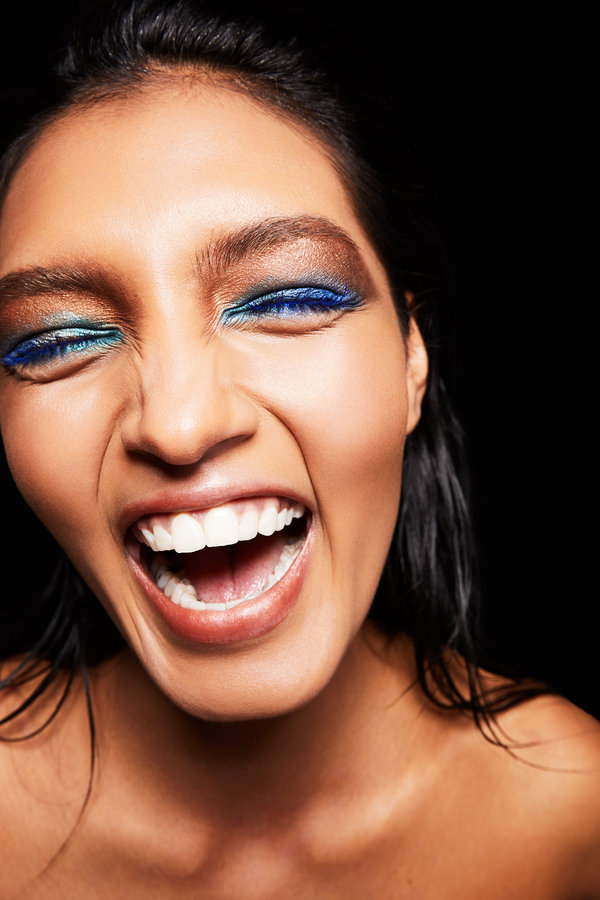 Glow Up in Metallics

Overall, the 1980s are spot-on inspiration for holiday, Mr. Barose said. And this copper plus metallic “peacock look” is all “Dynasty” everything. “Make it contemporary by making sure the edges aren’t too precise,” he said.

Apply a metallic nude eye shadow that’s close to your skin color from crease line to brow. This copper is Make Up for Ever Star Lit Powder Glow and Shimmer in Antic Gold ($21). Think of this base shade as a highlighter.

“If you use something that’s too light or too dark, it’ll be excessive because the color goes all the way up to the brow,” Mr. Barose said. The two jewel tones should complement each other. He used Make Up for Ever Artist Color Shadow Refill High Impact Eye Shadow in 304 Emerald Metallic and 215 Metallic Electric Blue ($17 each).

Dampen the makeup brush. “Using a shadow wet gives you more color payoff, makes the finish even shinier and creates less mess because the powder won’t fall onto the face,” he said. Brush the green from the inner corner to the middle of the lid on both top and bottom. Apply the blue on the outer half of the lids.

“You want it to blend seamlessly, but don’t overthink it,” Mr. Barose said. “Just smudge it with your brush.” Use a dry Q-Tip to swipe lightly at the outer edges of the shadow to drag it, making a diffused border. Line the eye with a bright blue, like Sephora Collection 12Hr Colorful Contour Eyeliner in 29 My Boyfriend’s Jeans ($10), and finish with thick coats of matching electric blue mascara, like Sephora Collection Volume ON in 02 Navy Blue On! ($10). Brush the brows up to make them bushy and fill in lightly with powder.

“Shine and shimmer can veer into looking precious,” he said. “If brows are bushy and mascara is chunky,” it’s a tougher look.

For hair, Ms. Mahoney massaged copious amounts of May 11 hair oil ($38) into the roots and through the lengths for a similarly edgy feel. “It’s sleek but still piece-y and undone,” she said.

You don’t want your rhinestones just floating on your face. Mr. Barose anchored them with monochromatic purples. “Rhinestones alone can be costume-y,” he said. “Layering different textures, like glitter and shimmer, adds dimension and is more sophisticated.”

Brush a purple shimmer like MAC Extra Dimension Eye Shadow in Smoky Mauve ($20) all over the lid and past the outer corners in a diffused, roughly triangular shape. Top that with a silvery liquid glitter, like MAC Dazzleshadow Liquid in Diamond Crumbles, $22, from the inner corners to the center of the lids.

The last step before adding the rhinestones is to line the bottom lid with more purple, like Urban Decay 24/7 Glide-On Eyeliner in Asphyxia ($21).

“Play with different sizes and colors,” Mr. Barose said. “If all else fails, you can use clear rhinestones on top of almost any color shadow.” He extended the lash line, essentially like a cat eye, using three blue Swarovski crystals and added clear crystals in the inner corners. Kat Von D Beauty Studded Kiss Crème Lipstick in L.U.V. ($19) rounded out the monochromatic purple.

“It’s holiday. You’re not supposed to be looking natural,” he said. “You’re free from a lot of everyday makeup theory.”

A sleek topknot looks cool with this type of geometric eye makeup because it continues the sightline upward, Ms. Mahoney said. “Anytime you have a tight topknot, it’s like a mini face-lift, and it accentuates the rhinestone placement.”

Find Your Light in Glitter

Mr. Barose gave us “flirty, disco diva drama” with this mix of gold, copper and magenta glitter. He said that glitter applied to the lid without a base is too sparse and appears relatively unpolished. Essentially, it looks less disco diva and more elementary schooler who has gotten into the Elmer’s and glitter shaker.

To make the glitter pop, put down a base that’s dark but in the same color family as the glitter. Mr. Barose used the darkest brown in the Lancôme Color Design 5 Pan Eyeshadow Palette ($50) in Kissed by Gold. With an eye shadow brush, he dusted the satiny brown up to the crease and beyond the outer corner of the eye.

Apply the shadow in thin layers. Clean up the shape with a Q-Tip so the edges are defined. Use this base layer as a guide when you tap on the glitter. Mr. Barose used Lemonhead Space Jam Ultra Luxe Glitter Balm in Paradise Cove ($28).

“Working with this gel is so much easier than loose glitter because it doesn’t fall on your skin, get in your eyes or get messy,” he said. Apply a few individual false lashes — he used Lashify C Gossamer Lash Cartridge in C12 ($20) — at the outer corners of the eye.

“You need that length to go full disco,” he said. “These lashes are false without looking fake. They’re not intimidating or heavy.”

He used a pink stain on the lips, Il Makiage Sheer Lip Colour in Rave ($22), and topped it with gloss. “With lips you can either play against the shine — that would be to go matte — or you can do a more subdued shine, like we did here with a sheer color and gloss.”

Happy Birthday Saint West: The 65 Most Adorable Photos Of The 3-Year-Old
World News