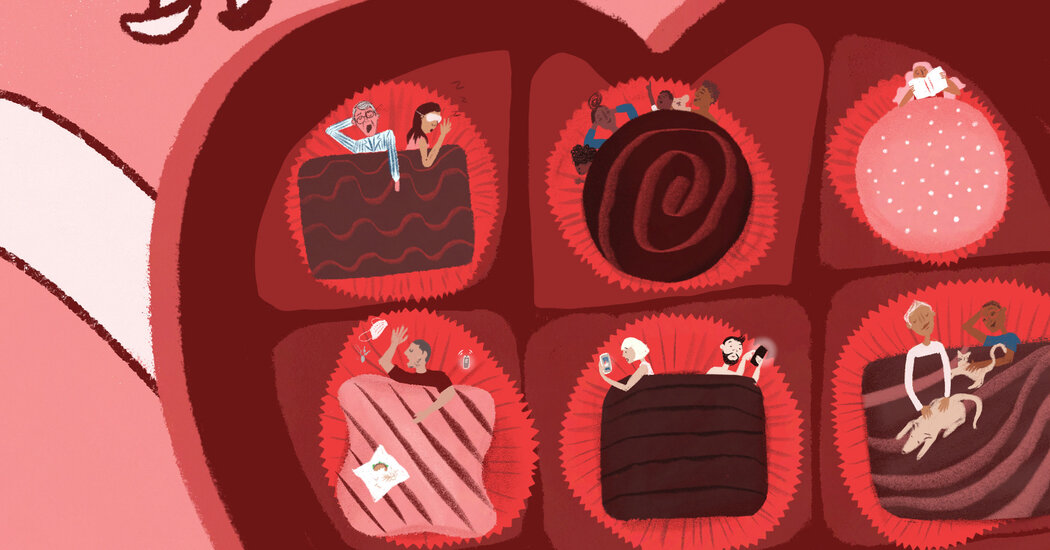 Even if he had a partner, Ryan Bailey wouldn’t be spending Valentine’s Day whipping up an elaborate five-course meal or scattering rose petals over a box of marzipan. Nor would he be whisking his beloved out for a dreamy candlelit dinner.

First of all, Mr. Bailey can’t cook. And he lives in Los Angeles, where the Covid-19 situation seems to change daily. As of this writing, outdoor restaurants are open. But who knows what it will look like on Feb. 14?

“I hate to politicize Valentine’s Day, but we’re still in a pandemic and Fauci said we’re not supposed to be touching people,” said Mr. Bailey, 39, an acting teacher and host of the “So Bad It’s Good” podcast.

The way he sees it, the last thing the world needs right now is a mass-market holiday that pressures people to spend money they don’t have on pink-and-red objects they don’t need.

So Mr. Bailey is vetoing Valentine’s Day this year. Actually, he’d like to eradicate the day altogether, and he believes now is a perfect time to kick off that campaign. What better way to create harmony and unity than by banding together to eliminate a day designed to make people feel bad?

“It’s only for Instagrammable moments,” Mr. Bailey said. “Girls are trying to impress their girlfriends to show what guys got them. And guys are trying to show that they’re good guys.”

If we’ve learned nothing else these past twelve months, it’s that expressing gratitude and affection shouldn’t be relegated to one misty day in February. Even Godiva — Godiva! — the chocolate company practically synonymous with Valentine’s Day, is folding up its heart-shaped boxes and shuttering its 128 store and cafe locations across North America, albeit not until the end of March.

But we don’t need a sanctioned holiday to eat chocolate: according to Nielsen data, in 2020 Americans spent nearly $15 billion on chocolate, a 5 percent increase over 2019. (Godiva’s online sales have been fine.) According to the National Confectioners Association, chocolate sales in 2020 were even higher at about $21 billion, up five percent from the previous year.

Still, the pandemic has shot an arrow through the love business.

Event planners, normally barraged with inquiries about engagement parties and weddings this time of year, are noticing the lack of enthusiasm.

“But to use a buzz word of the moment, we will say that the Hallmark Holiday is on ‘pause,’” she said.

It’s worth noting that Feb. 14 is an arbitrary date; there’s no clear reason it became the international day of love. According to Annebella Pollen, an art and design professor at the University of Brighton in England, and an expert on Valentine’s Day, the date originated as a saint’s day, although it’s unclear which saint it’s really celebrating.

“Dozens of Christians named Valentine were martyred and attained sainthood in the early church, but two third-century St. Valentines were especially revered in the early medieval times and both were apparently executed on Feb. 14,” said Dr. Pollen in an email.

The association between St. Valentine and love came in the late 14th century with the English poet Geoffrey Chaucer, who linked the springtime mating of birds to Valentine’s Day.

Sending cards to loved ones across the board has gained favor over the last few years with the arrival of the unfortunately named “Galentine’s Day” — which clearly exists to make single women feel that they’re just as entitled to plunk down cash as their coupled comrades. With that in mind, more cards have been sent to friends, family, and colleagues, said Nora Weiser, the executive director of the Greeting Card Association. (The nonbinary, presumably, have “Palentine’s Day.”)

This year, even those who typically go all out on Valentine’s Day are reconsidering it. Caitlin Kiernan, 50, and Kenny Kaplan, 46, who are engaged, normally spend Feb. 14 dressing up and having a fancy adult dinner. Not now.

“It’s freezing cold,” said Ms. Kiernan, a former beauty editor who lives in Freehold, N.J., with Mr. Kaplan, his mother and his two children from a former marriage. “I don’t know that I want to go outside with a blanket to eat. I’m happy just ordering pizza and I’ll tell them to put the pepperoni in the shape of a heart in the middle of it. We’ll open a really nice bottle of wine and sit by the fire and just look at each other and thank each other for being able to make it through this year.”

Dr. Carly Snyder, a New York-based psychiatrist specializing in women’s mental health, believes that the reality of spending almost every waking moment with your partner has made people want to do anything but that. “No one ever signed up to have truly intertwined lives in the way that we’ve had, and that’s stressful and hard,” she said.

Dr. Snyder has been married almost 15 years. She’s planning on giving her three young kids chocolate, and that’s pretty much it. “It’s kind of a silly holiday for anyone who’s in a long-term relationship,” she said.

Kate Casey, host of the podcast “Reality Life with Kate Casey,” has spent the pandemic quarantining with her husband of 14 years, Dan Rodrigues, and their five children. Cupid won’t be visiting their home in Newport Beach, Calif.

“I hate the idea that anyone has an expectation or obligation to buy a present to prove their love,” said Ms. Casey in an email typical of her sarcastic wit. “I have pushed those five kids out of my vagina. I should be celebrated 365 days a year, not just on Valentine’s Day.”

“Send your girlfriends, mom, anyone you love some flowers, or a thoughtful treat,” she said. No matter how intellectually dumb we think Valentine’s Day is, it never offends anyone to be thought of, especially during a loneliness pandemic.”