Home » Fashion » Is He the Next Martha Stewart? ‘Not So Fast,’ Says Martha.

Is He the Next Martha Stewart? ‘Not So Fast,’ Says Martha.

Joan Rivers was honking her head off. Pat Altschul was pecking at grubs. Carolyne Roehm sat in a brooding shed, downy feathers fluffed about her, hatching an egg. Any time a visitor strayed near this small flock of Sebastopol geese, Bill Blass, the resident gander, stuck his neck out and hissed.

“It’s mating season,” said Christopher Spitzmiller, the gentleman farmer responsible for this gaggle of geese named for socialites, a comedian and a notoriously tetchy fashion designer. “Bill gets a little pushy at this time of year.”

In the chill of an early spring afternoon, Mr. Spitzmiller, a talented ceramist, shelter magazine darling and Instagram presence, was conducting a reporter around the barnyard of Clove Brook Farm.

Mr. Spitzmiller is a trained artist who, following school at the Rhode Island School of Design and Central Saint Martins in London, detoured into pottery and then the creation of chic table lamps, dishes and cachepots that went on to achieve must-have status in the design trades, high-end living rooms (including those at the White House) and, not coincidentally, made him prosperous.

Over the last 15 years, he has taken a rundown five-acre plot carved from a former dairy operation in New York’s Dutchess County and made of it a lifestyle laboratory; here he conducts ongoing explorations into ceramics, cooking, decorating, gardening, beekeeping, animal husbandry and, now, the making of a book.

That just-published volume, “A Year at Clove Brook Farm,” falls squarely within the parameters of a familiar folksy publishing genre: the how-to. In common with most other such books, it has the tacit goal of sustaining an illusion that attaining a good life is largely a matter of creating perfected surfaces.

“It’s my personal search for perfection in the objects I make and the environments I create that keeps me going,” Mr. Spitzmiller, 49, writes in an introduction to a volume that, while it leans heavily into wholesome Puritan values like industry, thrift, patience and determination, sets the bar for attaining perfection higher than most mortals are likely to clear.

Organized by season, “A Year at Clove Brook Farm” takes a basic calendar format and packs it with recipes, lists, sources, photographs, folksy platitudes, D.I.Y. tips and quotations from Shakespeare and Thoreau. If you had been wondering how to celebrate peony time, Mr. Spitzmiller provides a formula for staging a “peony luncheon” with a table setting centered on a glass terrarium in which baby chicks you have hatched yourself are cozily nestled on shaved pine bedding.

When the rhubarb comes in, he is prepared with a recipe for putting up your own strawberry-and-rhubarb jam. Come bleak January, he proposes forcing hyacinth bulbs in colored antique vases scouted on eBay or else clay pots of narcissus that can be kept from flopping around like bored partygoers by pepping them up with cut-rate vodka. (Recipe: one part alcohol to six parts water.)

It is a book almost manic in its documentation of a dream world. And if the fantasy occasionally threatens to collapse on itself, like those unrestrained paperwhites, there is a corrective. Things were not always so bandbox-shiny at Clove Brook Farm or, indeed, in Mr. Spitzmiller’s life. There was a time, he admitted with disarming candor, when he was a mess.

“I was one of those people that drank a lot,” he explained amiably as he herded his small flock of socialite geese back to their pen.

“I drank with ferocity,” he said, noting that before joining a 12-step program in 2007, a typical evening might have begun with three or four cocktails, followed by a bottle or so of wine. “I enjoyed drinking and felt really creative when I did it,” he said. “Honestly, I had the best time.”

He stopped cold, he said, not because of any epiphany or because he had hit a dramatic rock bottom. “I never went bankrupt or crashed a car,” Mr. Spitzmiller said. “I just woke up one day and realized I wasn’t going to have the big life I wanted if I was hung over all the time.”

If there were a template for the big life Mr. Spitzmiller envisioned, it might be labeled Martha Stewart Living Omnimedia. And, as much as “A Year at Clove Brook Farm” reads like a retrospective view of how one clever self-improver saved a farm and forged a life, it can also at times resemble, to an almost uncanny degree, a pitch document for the creation of a multimedia brand. Mr. Spitzmiller and Ms. Stewart, as it happens, are good friends, both equally passionate about gardening, decorating, cooking, architecture and collecting fancy poultry. 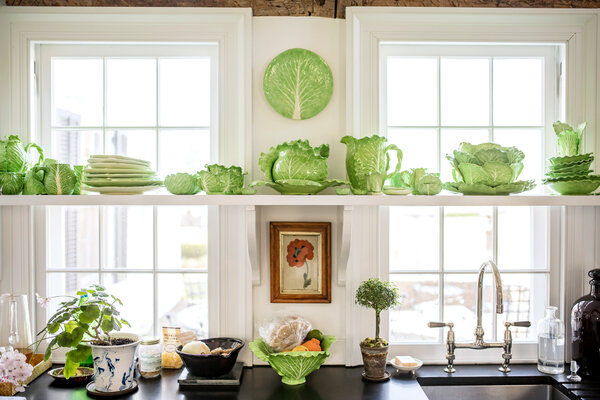 His Sebastopol geese were a present from Ms. Stewart, albeit they came in the form of eggs he incubated in his dining room. His gardens are plainly influenced by those Ms. Stewart has fashioned over the decades at her houses in Katonah, N.Y., the Hamptons, Connecticut and Maine. The swaths of scilla, snowdrops, camassia and summer snowflake underplanting an apple orchard originate in Ms. Stewart’s bold approach to gardening, as do the bosomy hydrangeas planted in hedges, peonies installed by the hundreds and the 30,000 daffodils carpeting the fields.

There are doves and turkeys and chickens and two different sorts of peacock (Buford Bronze and India Blue) at Clove Brook Farm. There is a singular collection of bronze or lead statues arrayed on bluestone plinths and that depict life-size stags. There is a sculptured fox once owned by Doris Duke, the tobacco heiress.

If the overall effect is Stewartian in its maximalism, the work ethic behind it is as ironclad as hers. One difference may be that, whereas Ms. Stewart has the means to employ armies in executing her vision, Mr. Spitzmiller and his fiancé, Anthony Bellomo, 42, a landscape architect, do most of the grunt work themselves.

In a foreword she contributed to “A Year at Clove Brook Farm,” Ms. Stewart notes the similarities between herself and Mr. Spitzmiller. “We both love restoration, renovation, and building from scratch,” she wrote. “And we both center our business efforts on the home, which we both love and cherish, for ourselves as well as our customers.”

Reached by telephone, Ms. Stewart added that Mr. Spitzmiller, “is a lot like I was at his age — very, very curious about a lot of things.” Still, she scoffed at the notion that he may one day succeed her as what she termed “the OG” of lifestyle branding. “He’ll never be the next me,” she said. “Are you kidding? He’d be crazy to want to be the next me, the amount of effort it takes.”

To an observer, the project of reviving a patch of depleted farmland and a collection of ramshackle structures and rendering them a domestic Eden did not appear to be a logical endpoint for a man who, over the years, and as finances allowed, has ceaselessly refashioned and then documented his surroundings as a homage to arbiters admired from afar until, in many cases, he befriended them.

“Listen, the thing that’s sweet about Christopher is that he’ll tell you all that,” said the decorator Bunny Williams, referring to Mr. Spitzmiller’s knack for absorbing and channeling the lessons and influences of tastemaker legends — people like the irascible “Prince of Chintz” Mario Buatta or the amiable decorating deity Albert Hadley or Ms. Williams, one of her field’s acknowledged doyennes.

“The interior of Christopher’s house is pure Albert Hadley,” Ms. Williams said. And it is, right down to a zebra-patterned hooked rug he peeled off the floor of the decorator’s East 85th Street apartment.

“The pictures were Mario’s pictures,” Ms. Williams added, referring to a wall of spaniel paintings bought at auction, then hung on ribbons and arranged studio-style much as Mr. Buatta displayed them on the lime-glazed walls of his Upper East Side townhouse apartment.

What would be the point of that? “Christopher loves to surround himself with people who can cross-pollinate and teach him things,” said Harry Heissmann, a decorator who worked as Mr. Hadley’s right-hand man for many years.

Undaunted by what he does not yet know, Mr. Spitzmiller portrays himself, in his book and in person, as the archetypal apprentice. “I’m basically a good student,” he said as he conducted a visitor into an octagonal dovecote built to make use of a set of five triple-hung windows bought on impulse at a roadside junk shop for $300.

Cupping a newly hatched Indian Fantail pigeon in his hands, Mr. Spitzmiller explained his ethos: “Most of all, what I want is to encourage people to do some of the things that I do and to not be afraid to fail.”