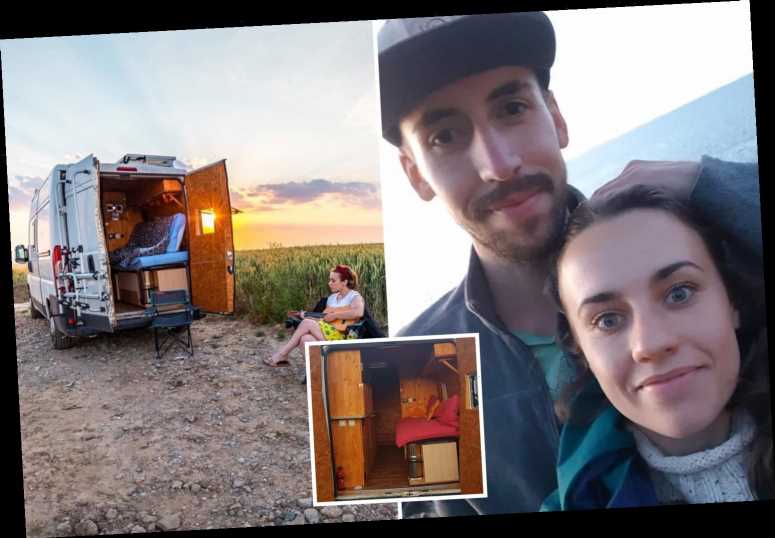 A WOMAN has revealed how she ditched her life in the UK to live off-grid with a man she met while on holiday.

Rachel Horne, 26, from England met her now husband Florian Roquais, 26, during a solo trip in Spain two years ago. 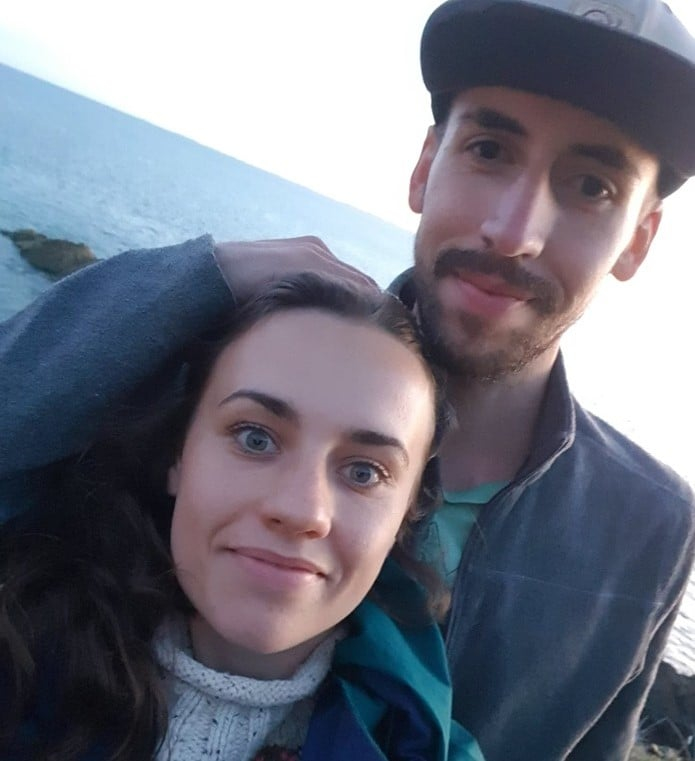 At the time, Florian was a seasonal worker and would often help out on farms in return for food and board. He had spent six years travelling, living in a tent and hitchhiking around Europe.

Meanwhile, Rachel was working in dementia and end of life care – a job she says left her feeling "trapped and helpless."

The pair immediately hit it off and just three days after meeting her new beau, Rachel returned back to England, quit her job and embraced a nomadic lifestyle.

The couple spent the next three months living in a tent in Scotland, where wild camping is legal as long as you leave no damage and spend one or two nights in each place. 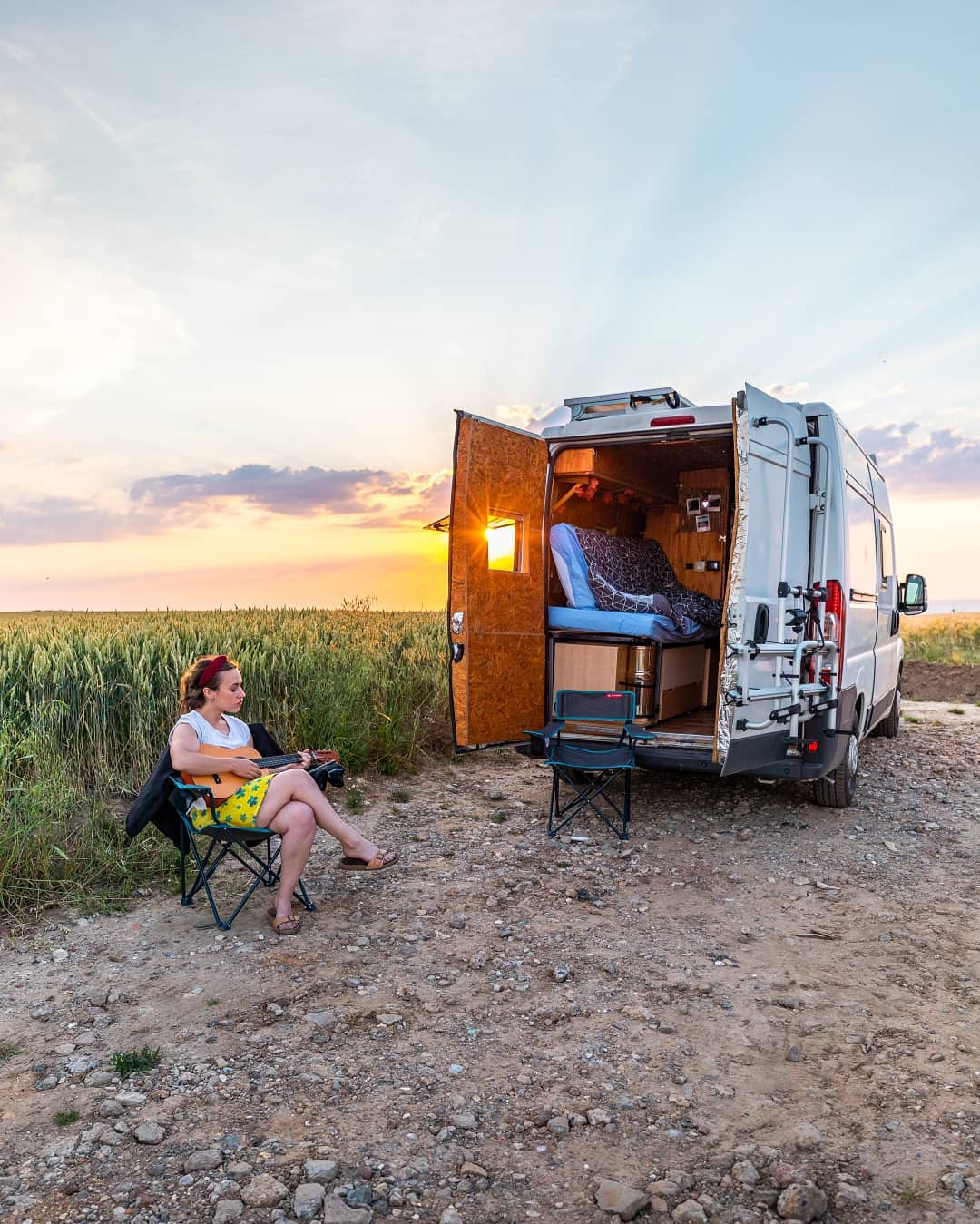 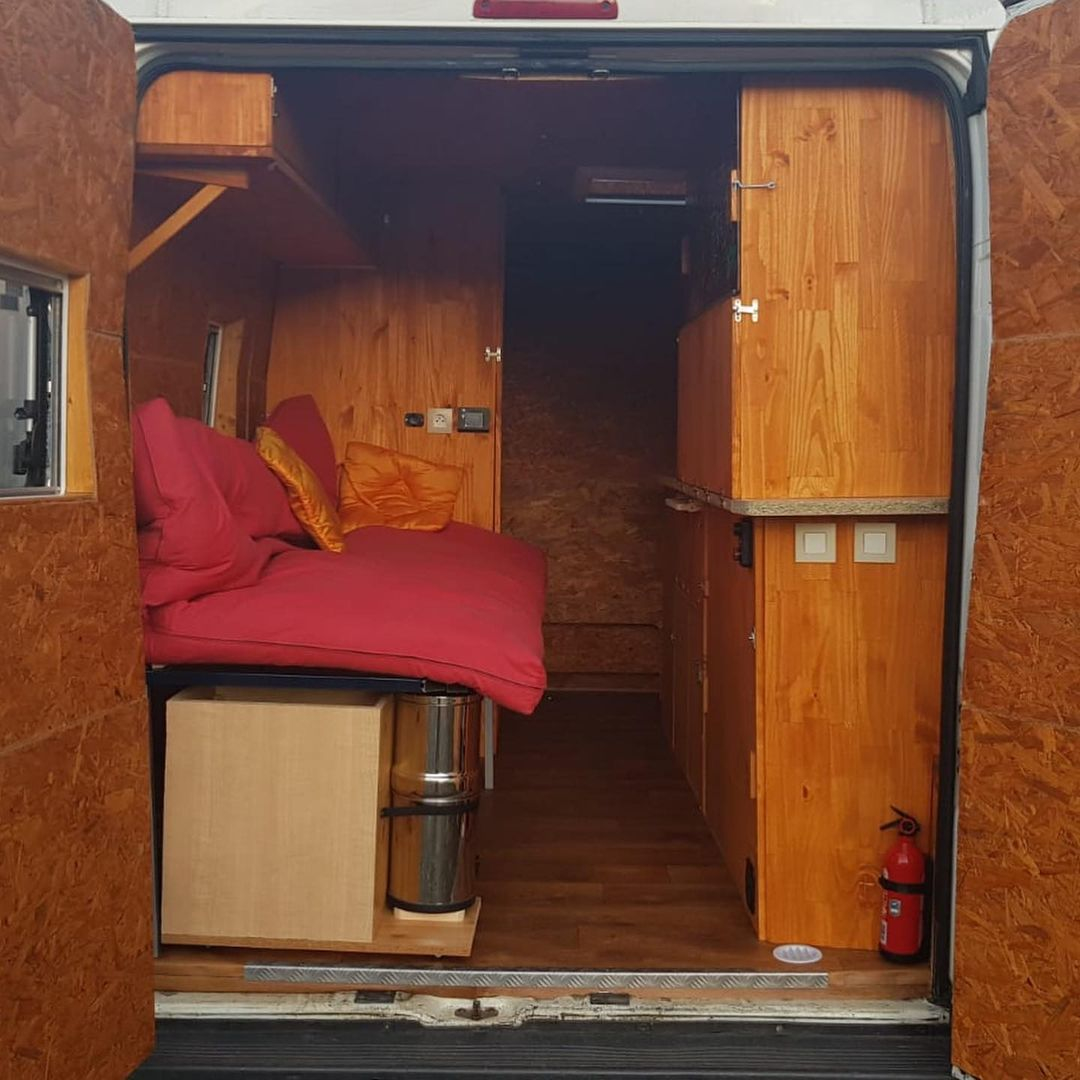 The couple loved their new lifestyle so much that they decided to live off-grid long-term – but needed to make their surroundings a bit more comfortable.

And so, they bought and converted a Peugeot Boxer for €9,000 (£7,852) and transformed it into a cosy transit van, complete with solar panels and a solar shower.

The pair now live an isolated life in the French mountains and spend their days hiking, doing yoga, swimming and reading – which Rachel documents on Instagram (@vertlevoyage).

"When I met Florian I had recently finished university and was working in dementia and end of life care while I worked out my next step," Rachel said. 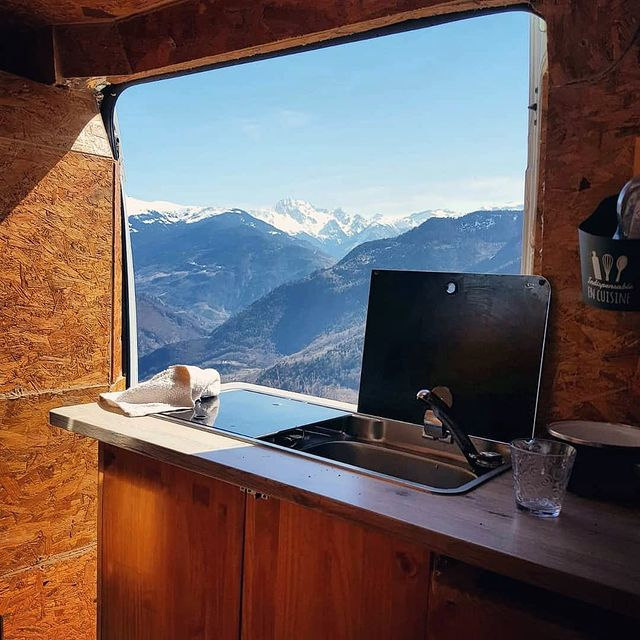 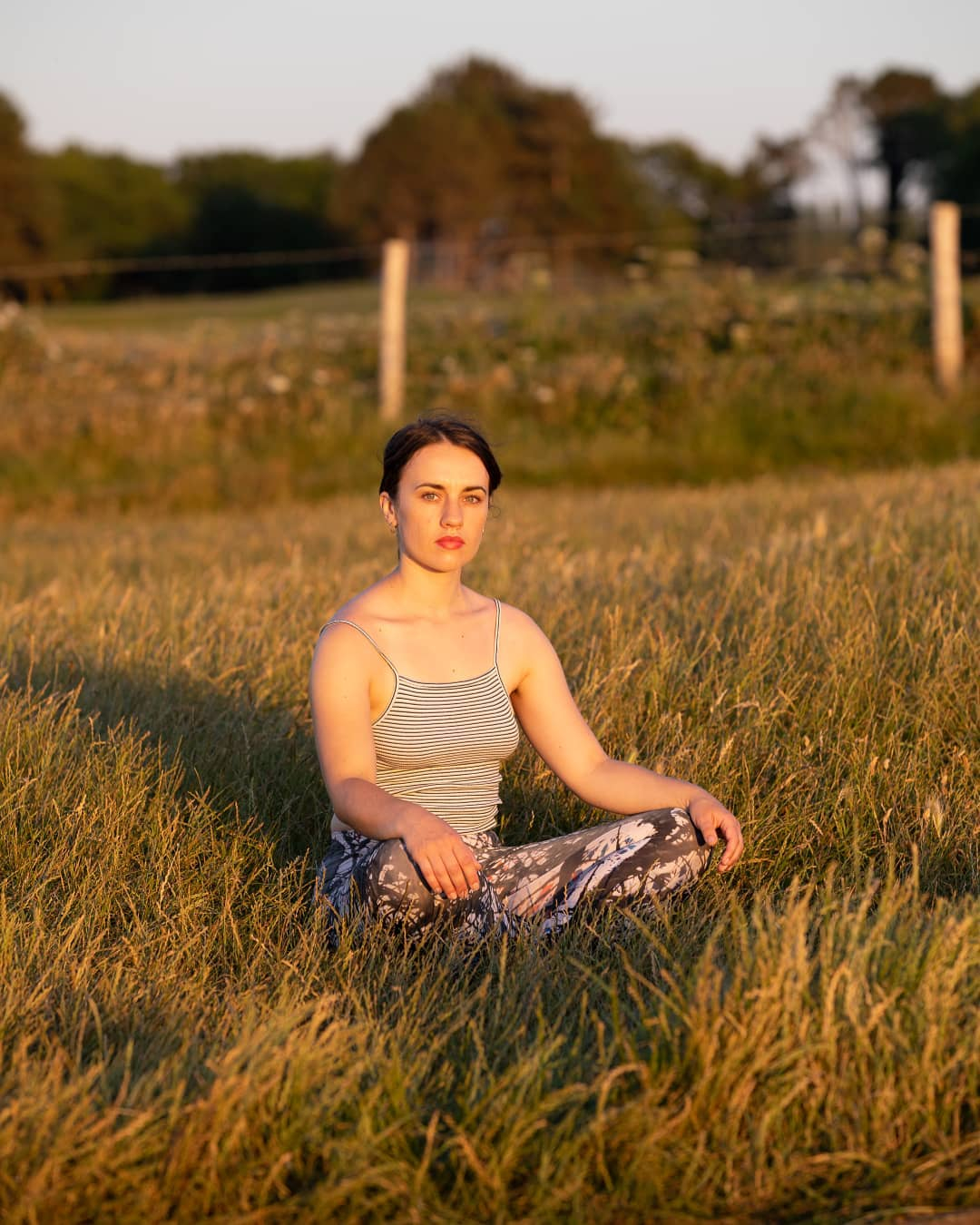 "I loved building relationships with so many interesting people with stories to tell but I was so devastated each time someone passed away.

"Seeing people in their final moments made me realise how short life is and I had been really struggling with the emotional drain of working in care.

"When I went to Spain and met Florian, he had been working a season over there and had spent the last six years travelling.

“He was so free and happy, showering in rivers every day and waking up to chase new adventures – I was fascinated by his approach to life.” 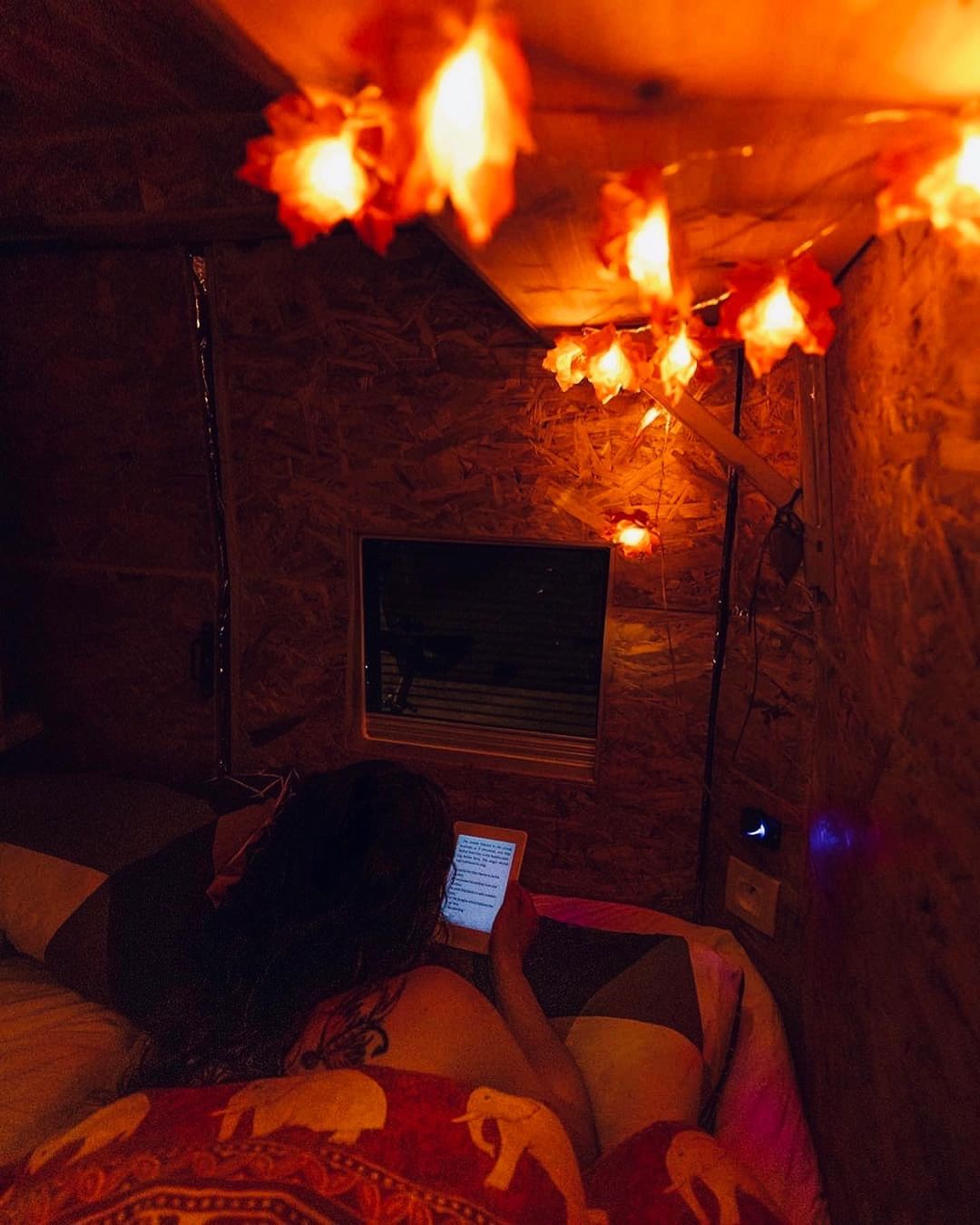 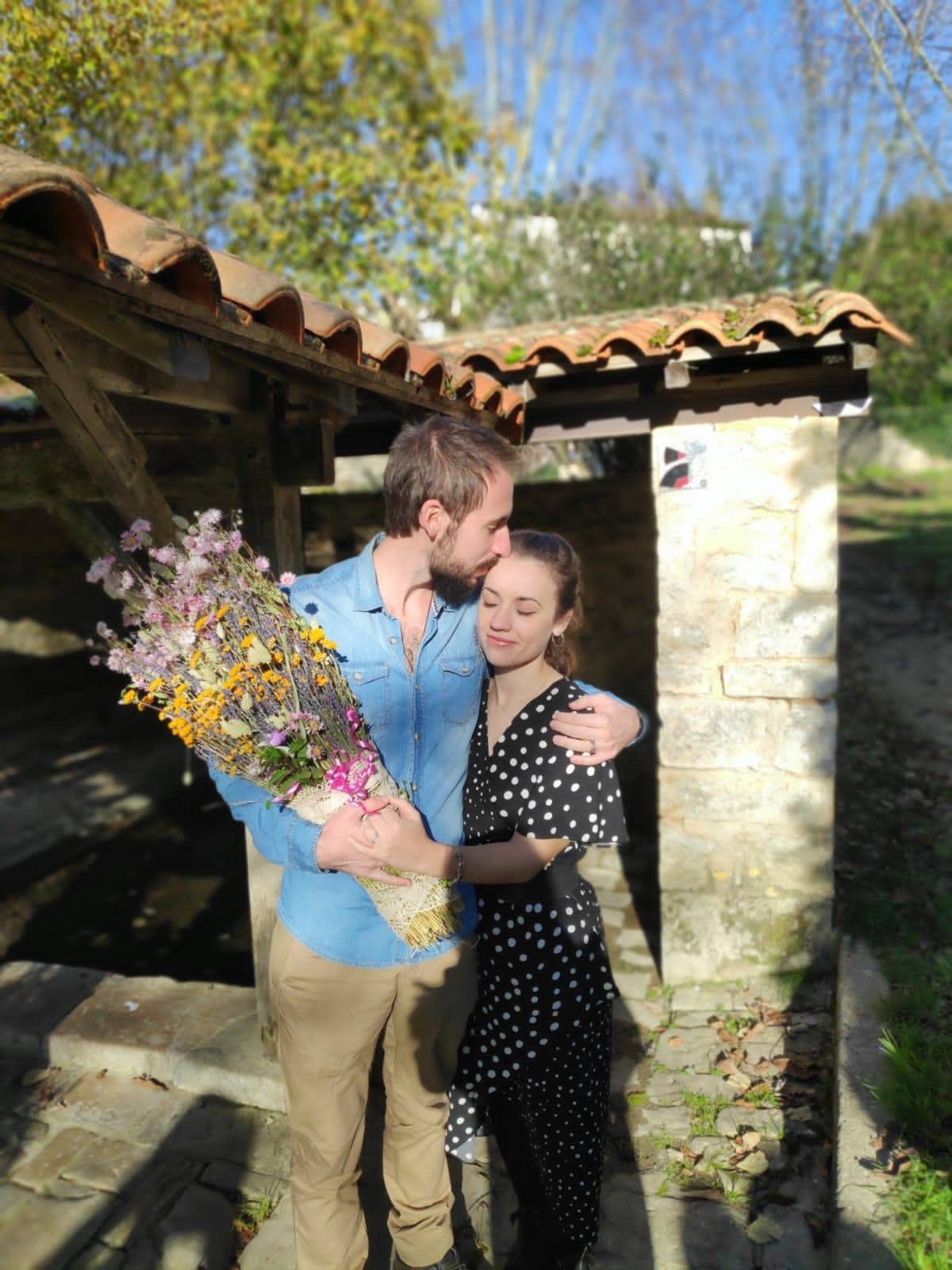 Quitting her job and moving away with a man she had known for just a few days was a big step – one that left Rachel feeling anxious.

She said: "I was worried I was making a mistake.

"I thought about how humiliated I'd feel if I left everything for him just to come home two weeks later with my tail between my legs but I knew that I had to change something drastically.

"I was desperately unhappy, and I couldn't see how things could get much worse.

"There's always going to be a million reasons not to go for things, so I tried to trust my intuition.

“I felt in my gut that Florian was a good man and I knew that I'd regret it if I didn't at least give this a go.” 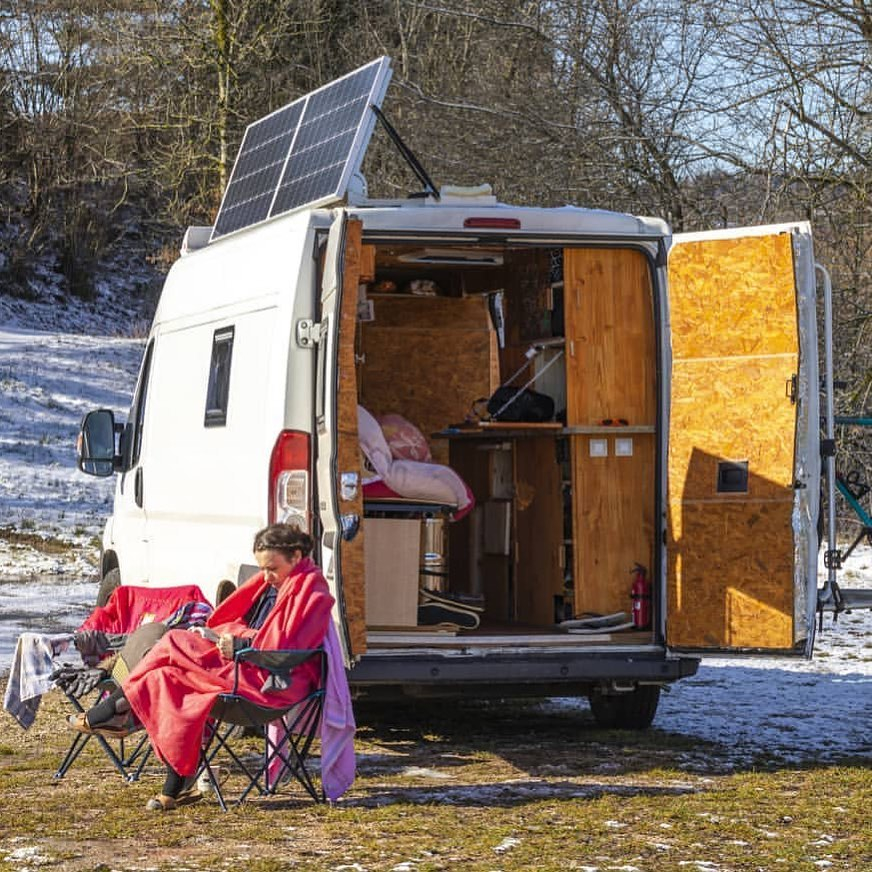 Thankfully, her parents were both supportive of her decision and even met Florian before the couple embarked on their tent adventure in Scotland.

Rachel said: "They knew that I was unhappy and they hoped that a different life would suit me.

"They wanted to meet Florian first, so he got a bus over to England to spend a couple of weeks in my family home.

"He soon got the seal of approval and we set off to Scotland.

"My friends were worried, particularly my male friends. They told me I could be heading off with a murdering psychopath and kept reminding me to call them and get them to pick me up if it turns out Florian was a dangerous man.

"I think it was hard for them to get their head around his way of life, so it made them feel that he must be up to something.

"In Scotland, we camped with eagles flying above us, we saw sea otters playing, watched dolphins from the sand dunes.

“We also got rained on for basically the whole three months and ate so much bread and jam that I can’t eat it anymore without feeling sick, but it changed my behaviour so much.” 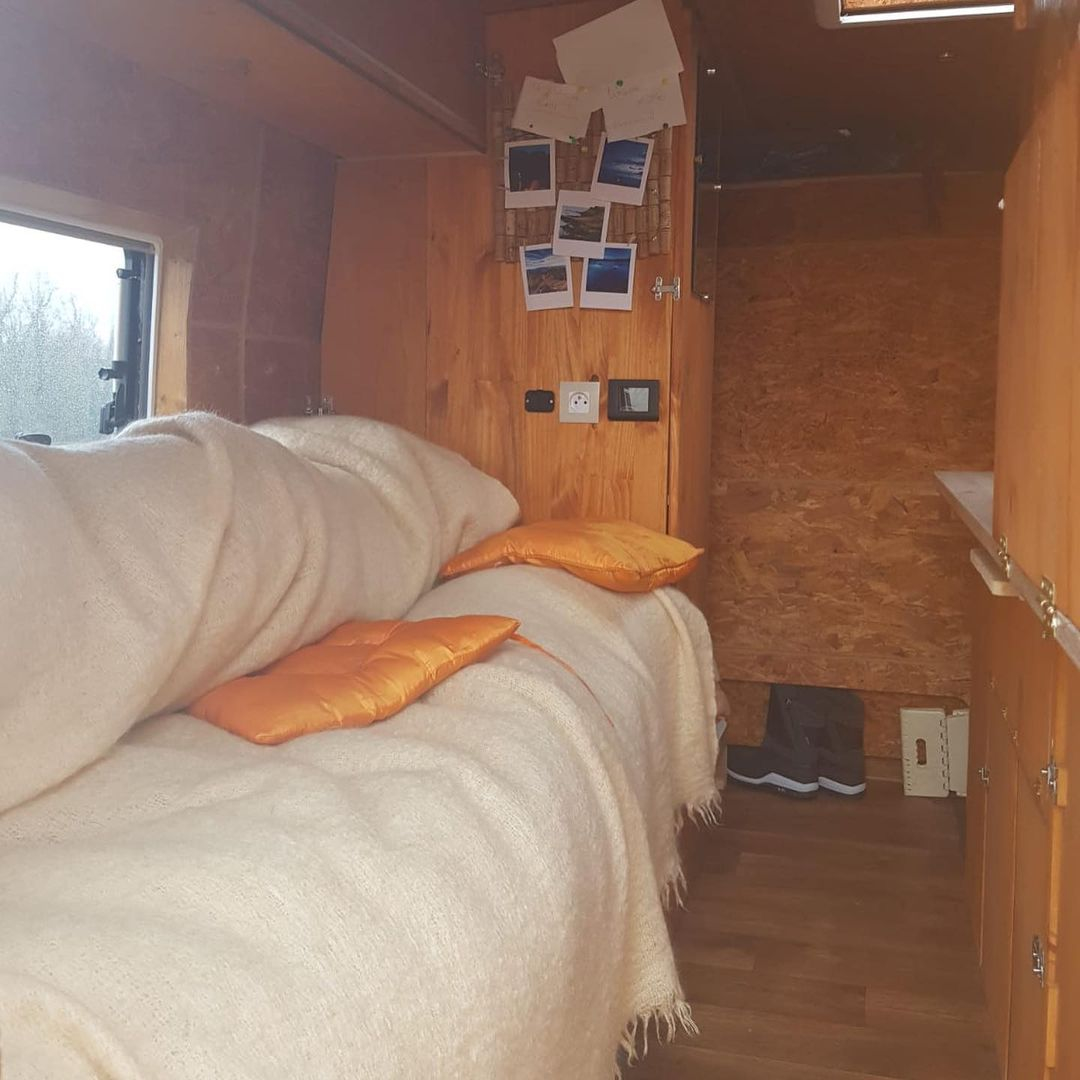 However, things worked out perfectly for the pair and while their relationship has blossomed, Rachel also now has a new approach to life.

She said: "Now, I live as close to zero waste as possible and I use plant-based shampoo and laundry detergent that doesn’t pollute the water.

“I have stopped taking flights, stopped buying clothes etc. Once we take the time to reconnect with nature, it just becomes so much easier to live a simpler life.”

Despite enjoying living in a tent, Rachel was relieved when the couple decided to buy their home on wheels last year. 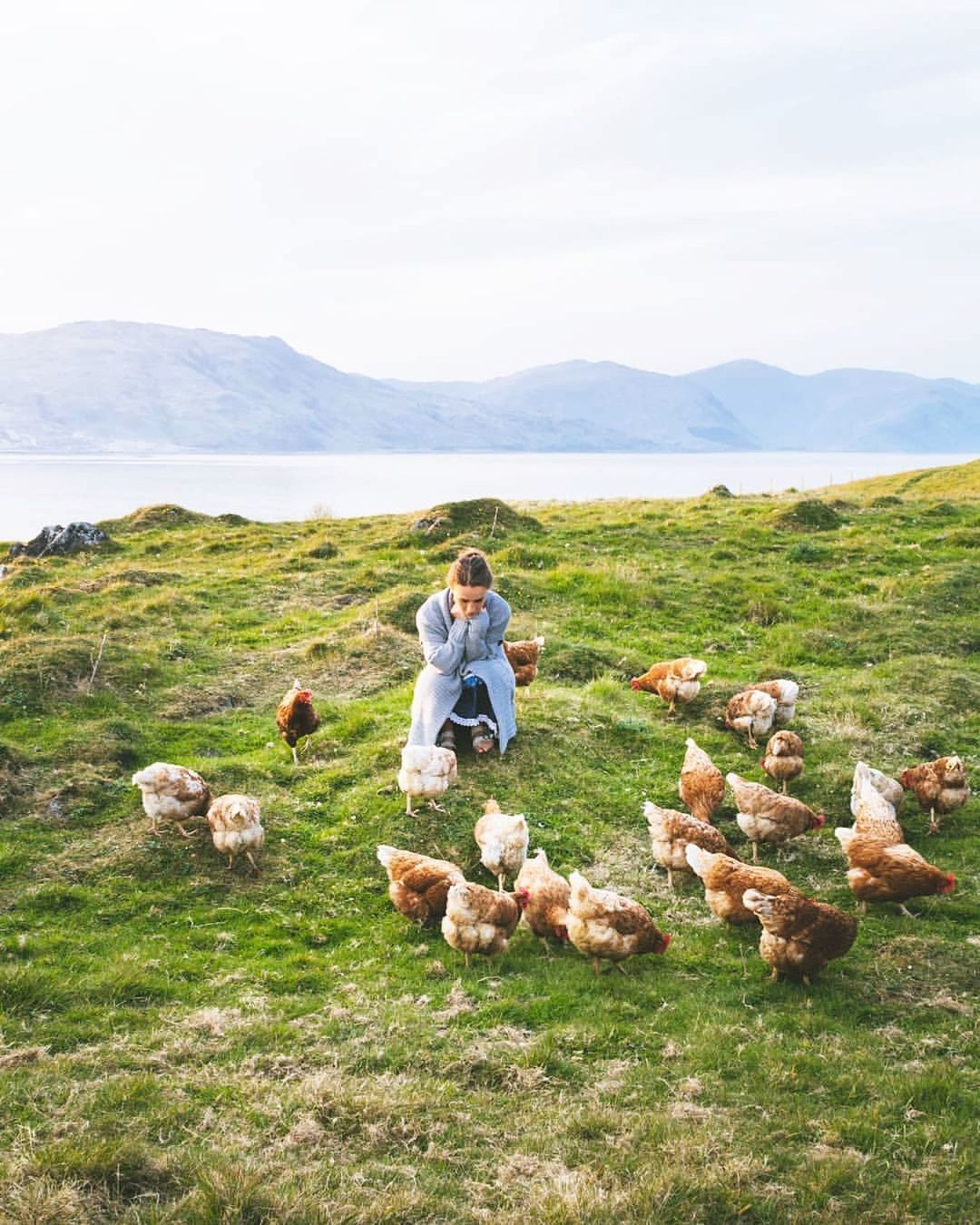 They paid for it with Florian's life savings and set to work transforming it into their very own home on wheels.

She said: "My husband has a lot of experience with DIY and trained as an electrician back at school, so he had a lot of the skills already.

"He started by insulating everything and then he built the kitchen, which has gas hobs and a sink.

"Then he installed the air heater, built lots of storage and created a pull-out double bed that goes back into a sofa by sawing up an old bed frame from a charity shop.

"The electrics run on solar and we have a small toilet and solar shower.

“We only carry 40 litres at a time but it can last us both a week – we use far less power and water on the road than in a house, and we recycled a lot of the building materials.” 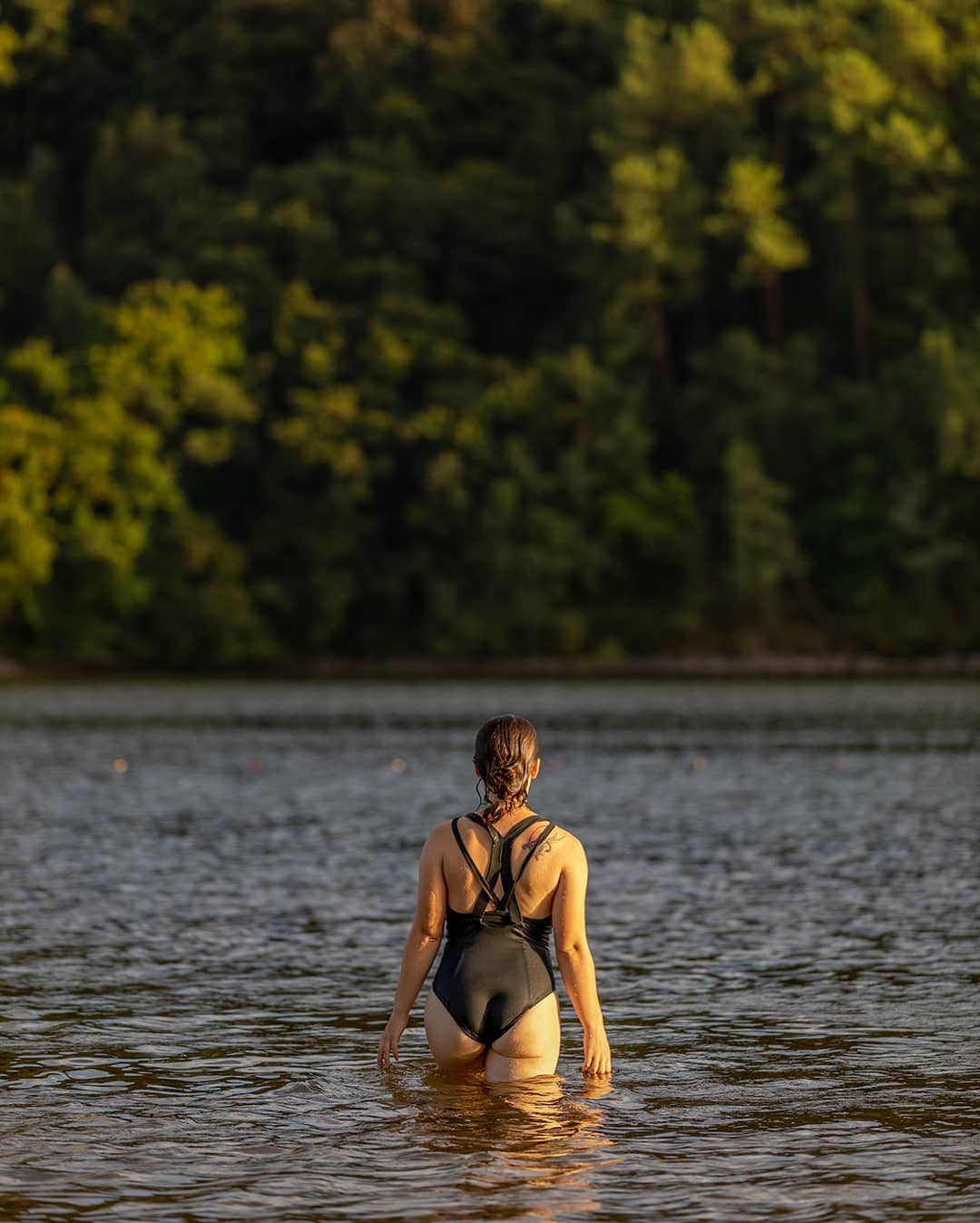 Florian also fitted a large desk space so that the couple could both easily work while on the road and a water filter so they can drink river water when it’s not possible to get to a clean water source.

It took the young man just six months to complete the project and it cost just €4,000 (£3,487), thanks to Florian doing most of the work himself.

After a year together, the couple decided to tie the knot in November 2020 in his home country of France.

Rachel said: "We decided to get married for a few reasons; partly because of Brexit.

"I realised we wouldn’t have the right to live together anymore and that was unthinkable.

"He is the love of my life and I couldn’t bear to be limited to three months together then nine apart.

"COVID was the final decider because as borders shut down and the world becomes less predictable and stable, we realised things could change at any moment." 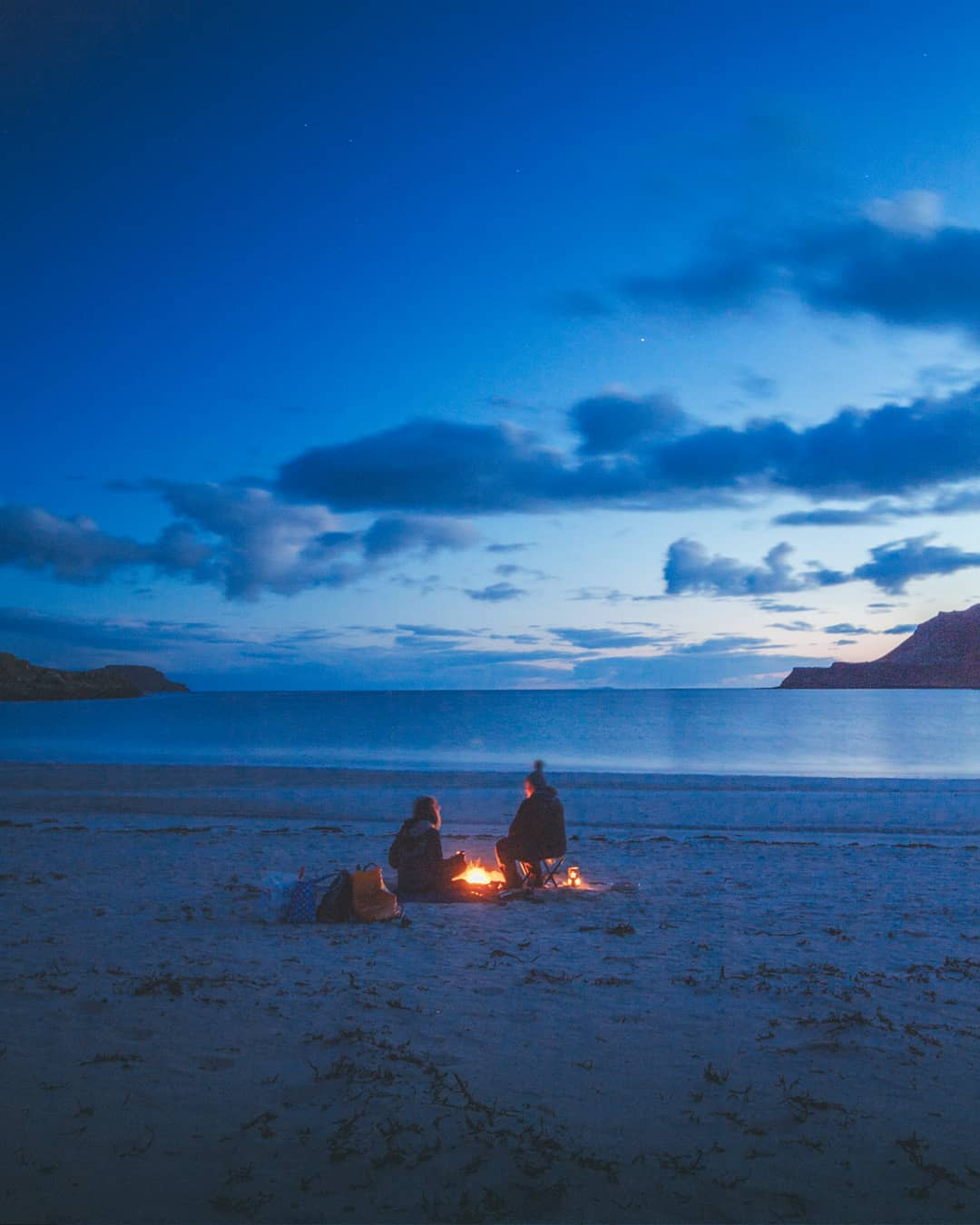 The couple stayed at Florian's mum's house while they sorted out paperwork before a small ceremony at the local Mayor's office.

She said: "I spent the day before the wedding crying my eyes out because my parents couldn’t come.

"I wanted my sister to do my hair and my best friends to help me get ready, but I had to get ready by myself.

"I was missing my family so much after a year apart because of Covid, and it hurt so much not to have them there but on the day, the sun was shining and I just felt grateful to be marrying such a wonderful man.

"It was just us and the witnesses, in the Mayor’s office, then we ate pizza and went for a long walk.

"Not many people can say their wedding cost £30 and I didn’t have to stress about table plans or the politics of who to invite.

“After the wedding, we took the van to Auvergne [in France].” 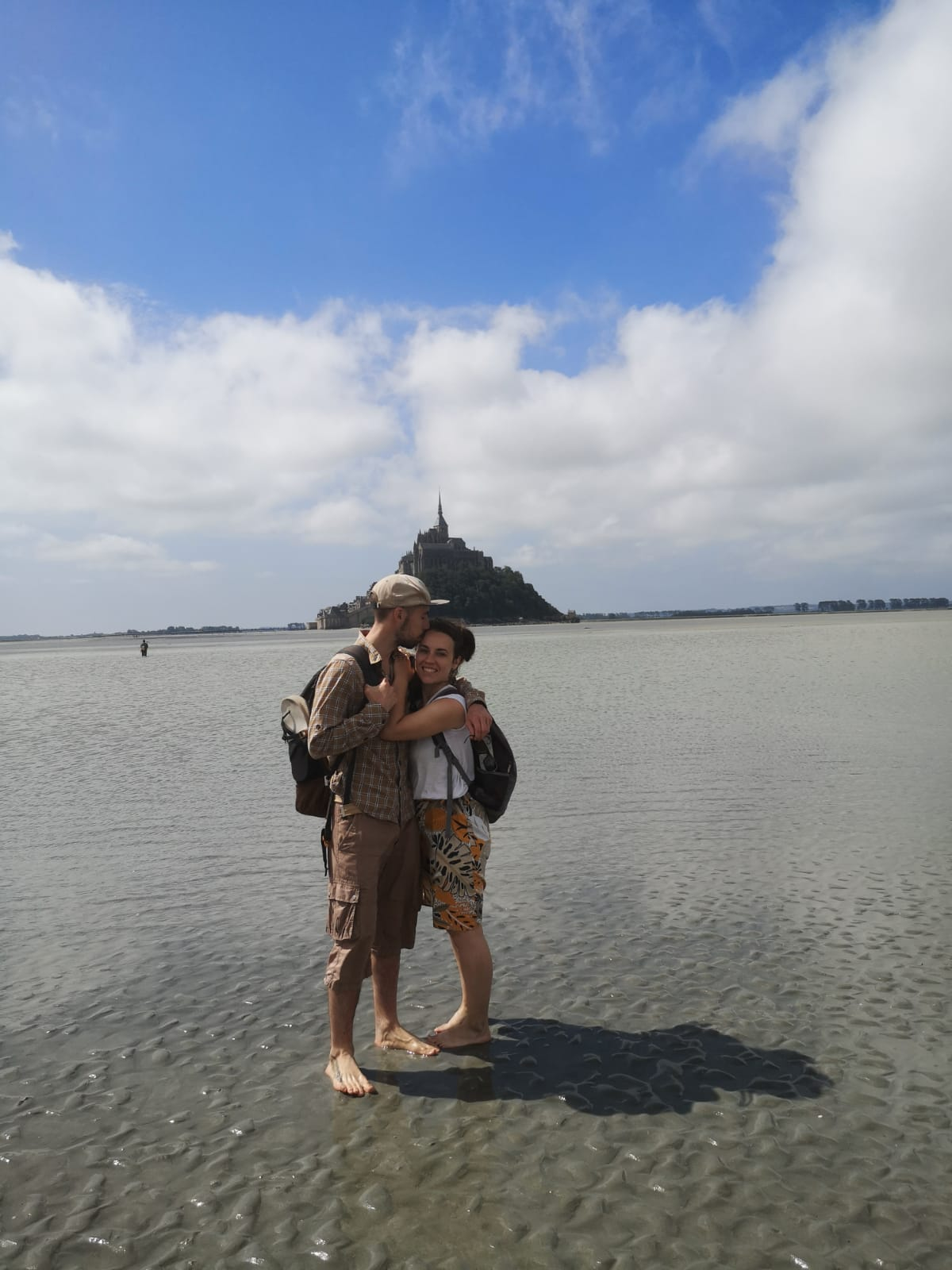 Rachel said: "As we got to the Alps, Covid hit and we were forced to stay quarantined in an empty ski resort.

"Since then, we have spent the year in France, so it’s been a year of micro travel.

“Now we are interested in finding a safe place to settle down and if we had known Covid was coming, we wouldn’t have spent so much transforming the van.”

While life on the road is far more relaxing than Rachel's former life in the UK, it still has its challenges. 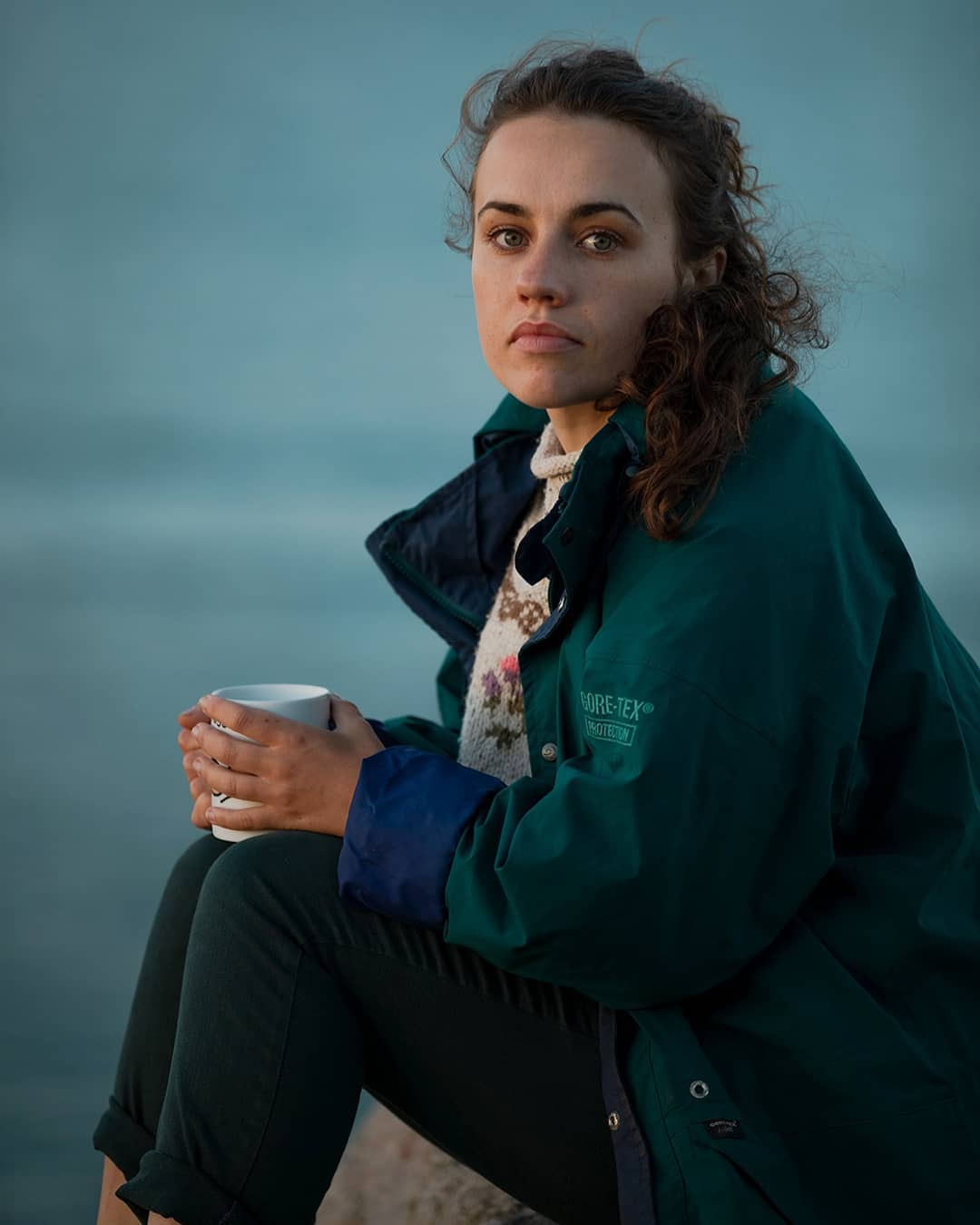 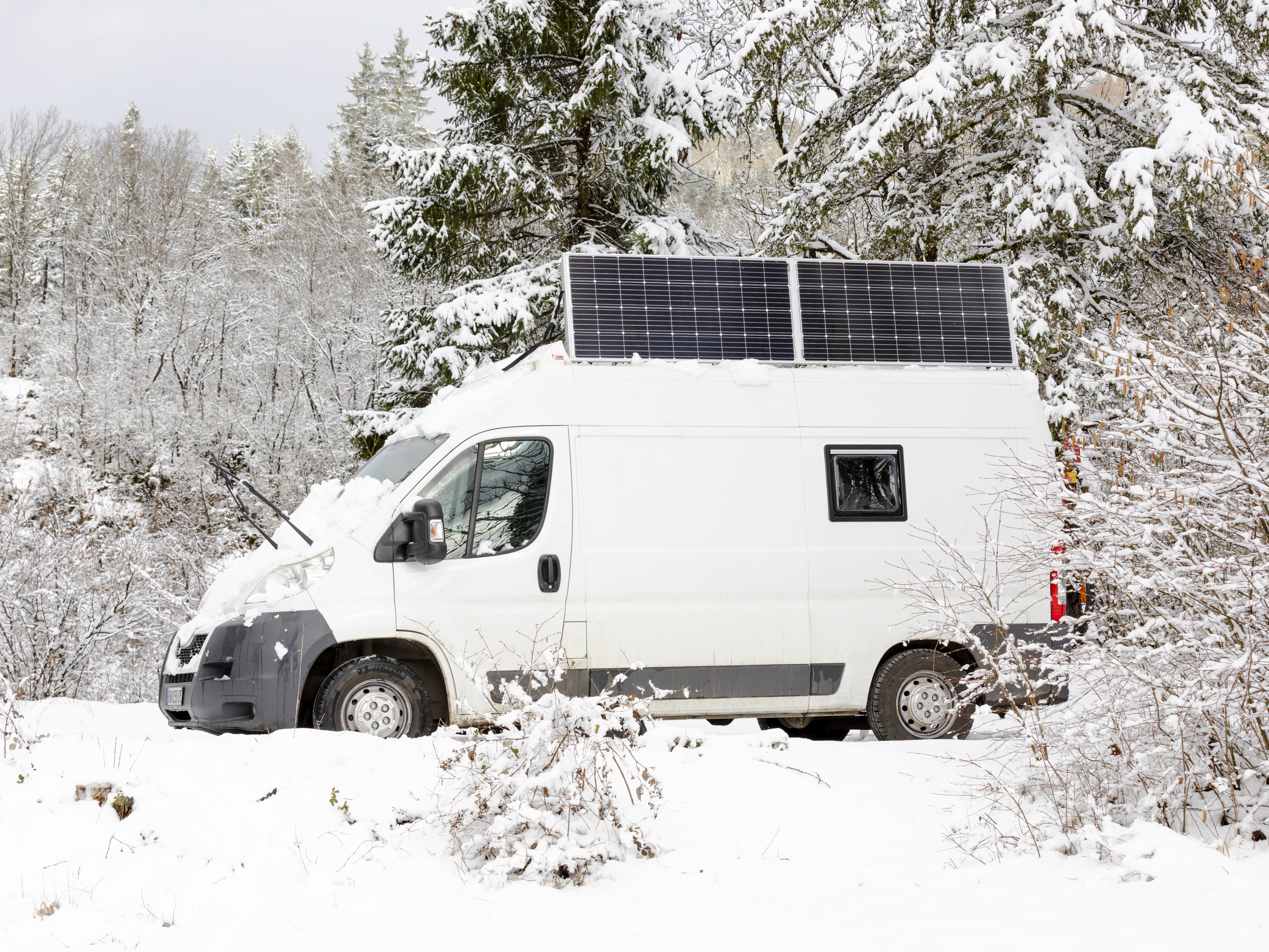 She said: "It's not an easy or comfortable lifestyle.

"Things break all the time, it’s cramped, you will meet some hostility from people that think you are ‘freeloaders’ or ‘wrong-uns’.

"It can also feel lonely, especially during Covid as we can't socialise with people.

"We keep ourselves to ourselves and I have barely spent time with anyone apart from Florian for a year.

“Sometimes I feel isolated and alone but I know it’s the same for everyone whether they live in a house or a van right now.” 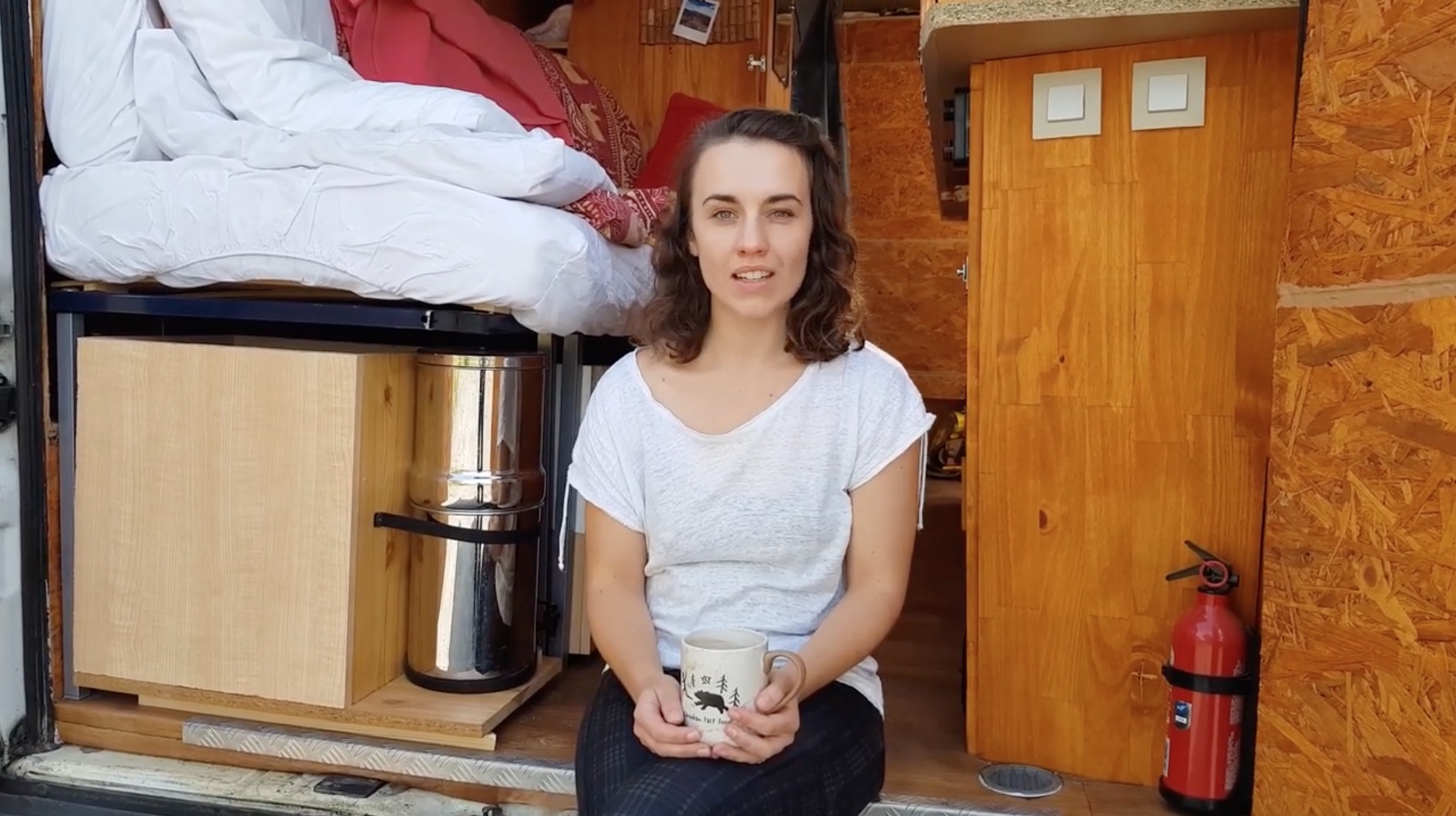 Despite this, Rachel doesn't regret quitting her job for life on the road and says a slower pace of life has helped tremendously with her anxiety.

She said: "The best thing is that I can live a life in line with my values.

"When you live in a van, you are so much closer to nature; seeing sunsets and sunrises and waking up with the birds, it's beautiful.

"I almost can’t remember what air pollution smells like and seeing wild animals every day and the fresh mountain air gives me hope that it’s not too late to turn around our relationship with the planet.

"When we visit friends in their homes, we are delighted by the fact that you can switch on the kettle or have a long hot shower without worrying about every drop of water. 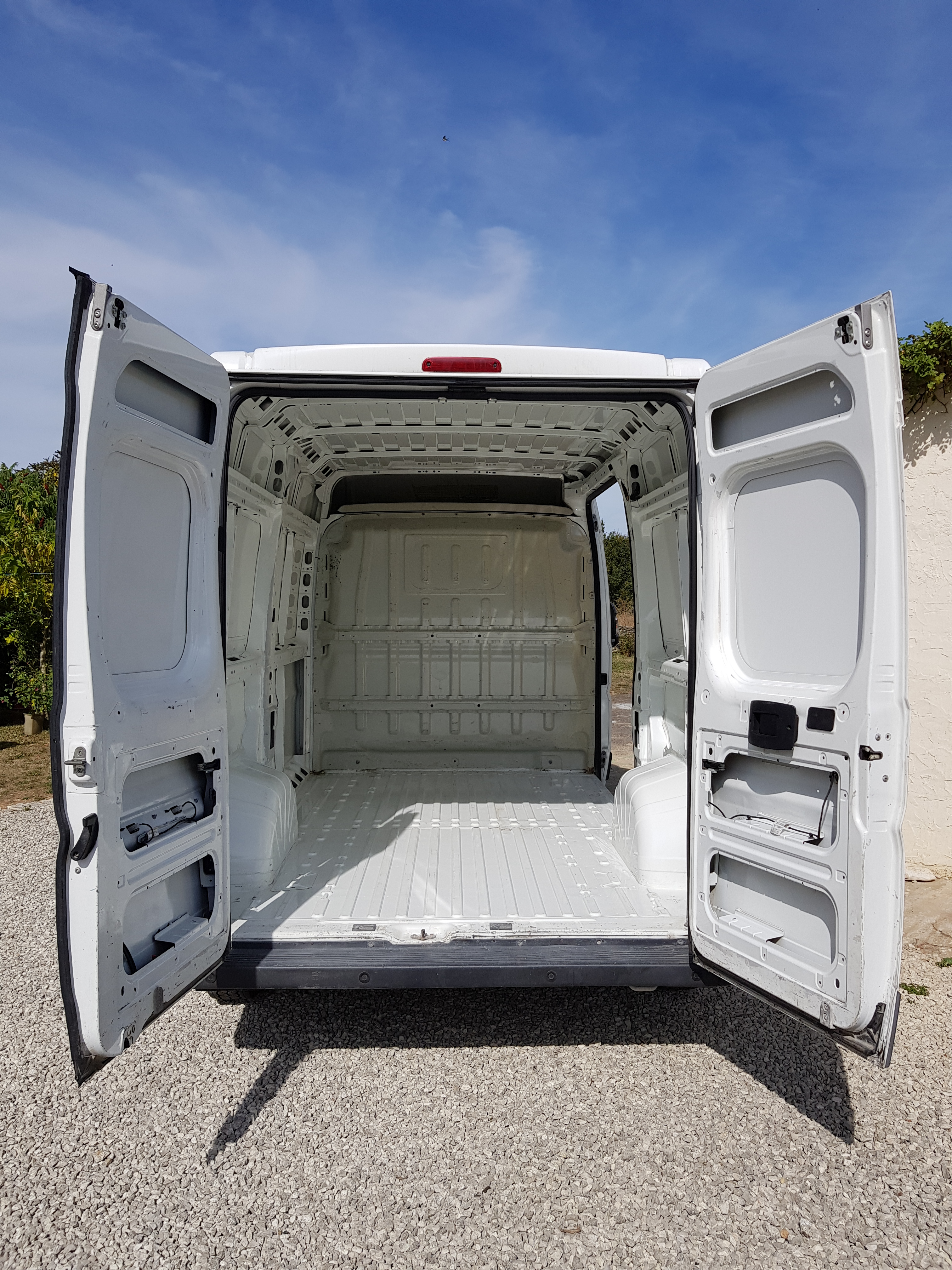 "We've become so spoiled for comfort and luxury in the 21st century that we forget how precious the Earth's resources really are and living in a van has helped me to really appreciate all the things I used to take for granted.

"I feel much calmer and better about my body now I'm not constantly exposed to advertising telling me to drink weight loss tea, buy clothes or wear more makeup.

"It just feels like such a relief to be me and not feel like my worth is measured by money, looks, or things.

"They say the best things in life are free, and it's so true. I might not have the most expensive trainers anymore, but I have time to hike in the mountains with the man I love.

"For me, that is far more important.

"No matter how unhappy you might feel in life, you would be amazed how quickly things can change and turn around.

“Don't give up on finding the kind of happiness that you deserve, it might be just around the corner.”

The couple have no plans to settle down in a "normal" house in the future – though they would settle somewhere permanently if it was environmentally-efficient.

Previously, a woman is now mortgage and rent-free after buying a £2,500 double decker London bus and turning it into a stylish home.

And this woman made a chic DIY hanging closet wall with gold racks from Amazon.