Home » Fashion » I quit high-flying £90k lawyer job to live on a boat – now I wee in a bucket, never shampoo & rarely shower, I love it 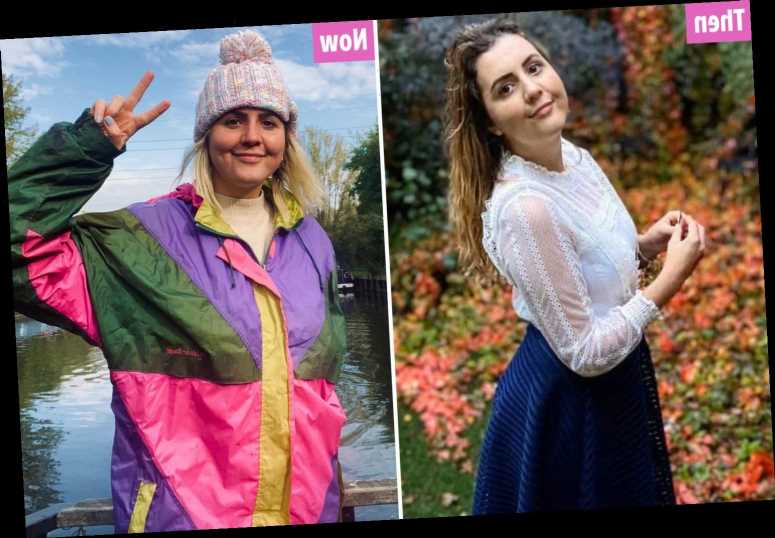 I quit high-flying £90k lawyer job to live on a boat – now I wee in a bucket, never shampoo & rarely shower, I love it

WAKING up at 6am, Dorothy Herson jumped in the boiling shower, pulled on her smart suit and grabbed a Pret coffee before navigating the tube.

She was solicitor at a high-flying law firm in London after graduating from Warwick University with a first class degree in English. 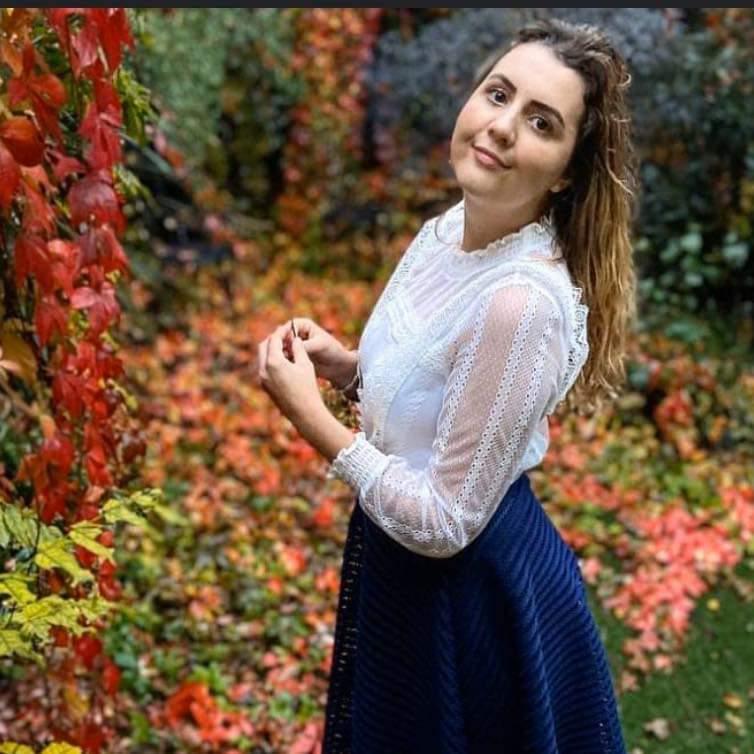 “After that I did a year-long postgraduate degree in law at the University of Law in Moorgate, central London, to become a solicitor,” she explains.

“It was long hours and lots of studying but I had always wanted to become a lawyer. It was all I’d ever dreamed of. Ever since I was a little girl I’d been told, ‘you need to study hard and get good grades.’”

So Dorothy, originally from Earley, near Reading, did and it paid off.

She was among one in a thousand invited to join the graduate training scheme of a top 10 law firm with offices across the world. By 25 she had a salary of £90,000 – more than three times the UK average annual salary of £27,000. 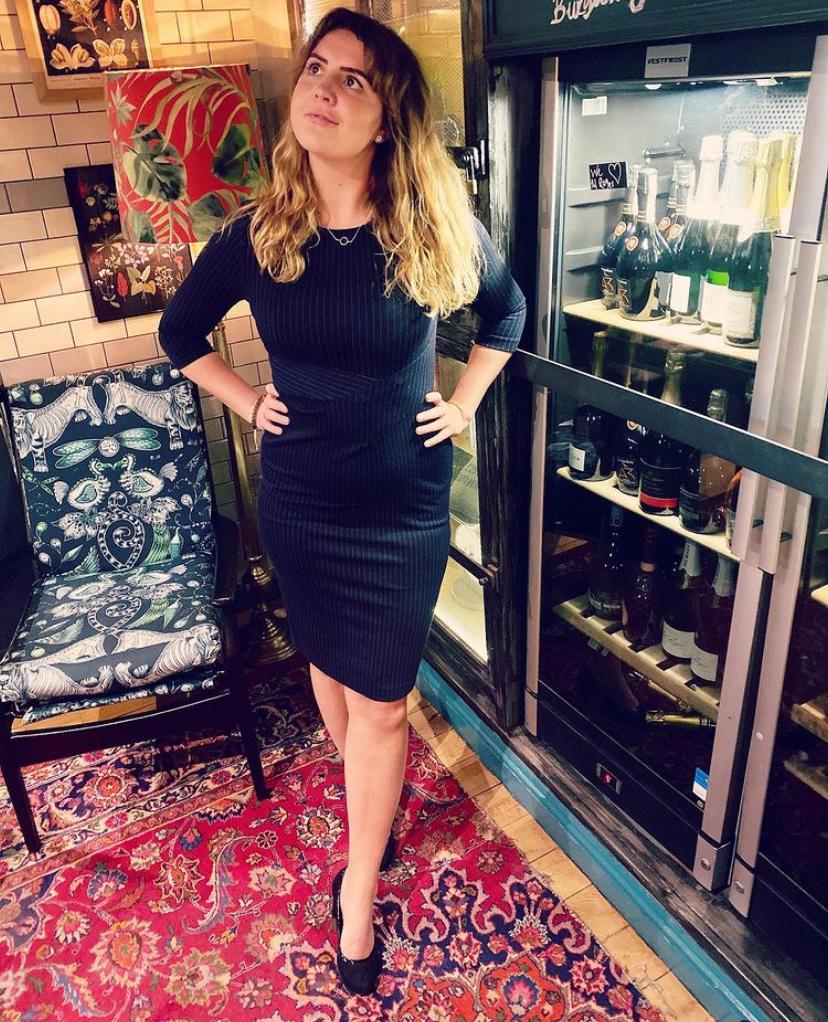 “But it was really hard going,” Dorothy, now living in London, admits. “I would be at my desk by 7am or 8am and would work until 9pm or 10pm.

“Often I would skip lunch.

“I was in my early 20s and my mates would be chatting about all the blokes they were meeting in clubs and going for cocktails whereas I was just staring at the computer non-stop.

“Still, I told myself this was what I had worked for.”

But it affected her health. “I lost loads of weight,” she says. “The long hours meant I wasn’t eating properly and it had a negative impact on my mental health – I was really stressed. Plus, I found the work so boring.” 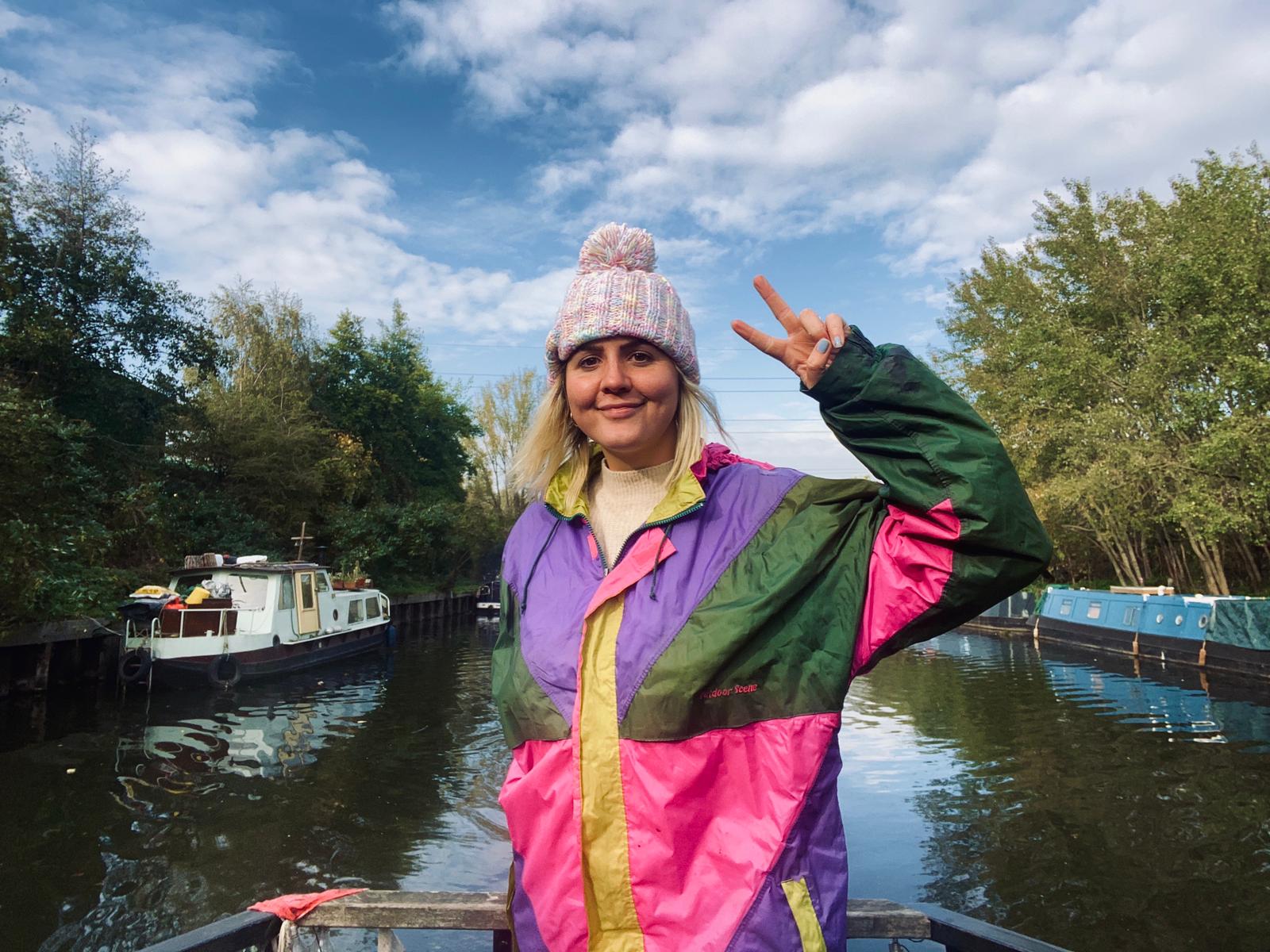 Did I really want to be a lawyer with a flat and a mortgage?

Still, intent on achieving her goals Dorothy continued to push ahead, carefully putting away an astonishing £2k each month.

Over two years Dorothy saved up £20k for a flat deposit. Then armed with another £10k inheritance she set about looking for her dream pad – determined to find a two-bed within 40 minutes of her office.

“I’d got as far as getting a mortgage in principle when a bloke I worked with told me, ‘you’ll be chained to that loan for at least the next 20 years,’” recalls Dorothy. “That was two years ago, when I was 25, and his words just struck terror in me. “Did I really want to be a lawyer with a flat and a mortgage?”

So, the very next week, she quit her job – and bought an old canal boat for £40k, borrowing an additional £10k from family. 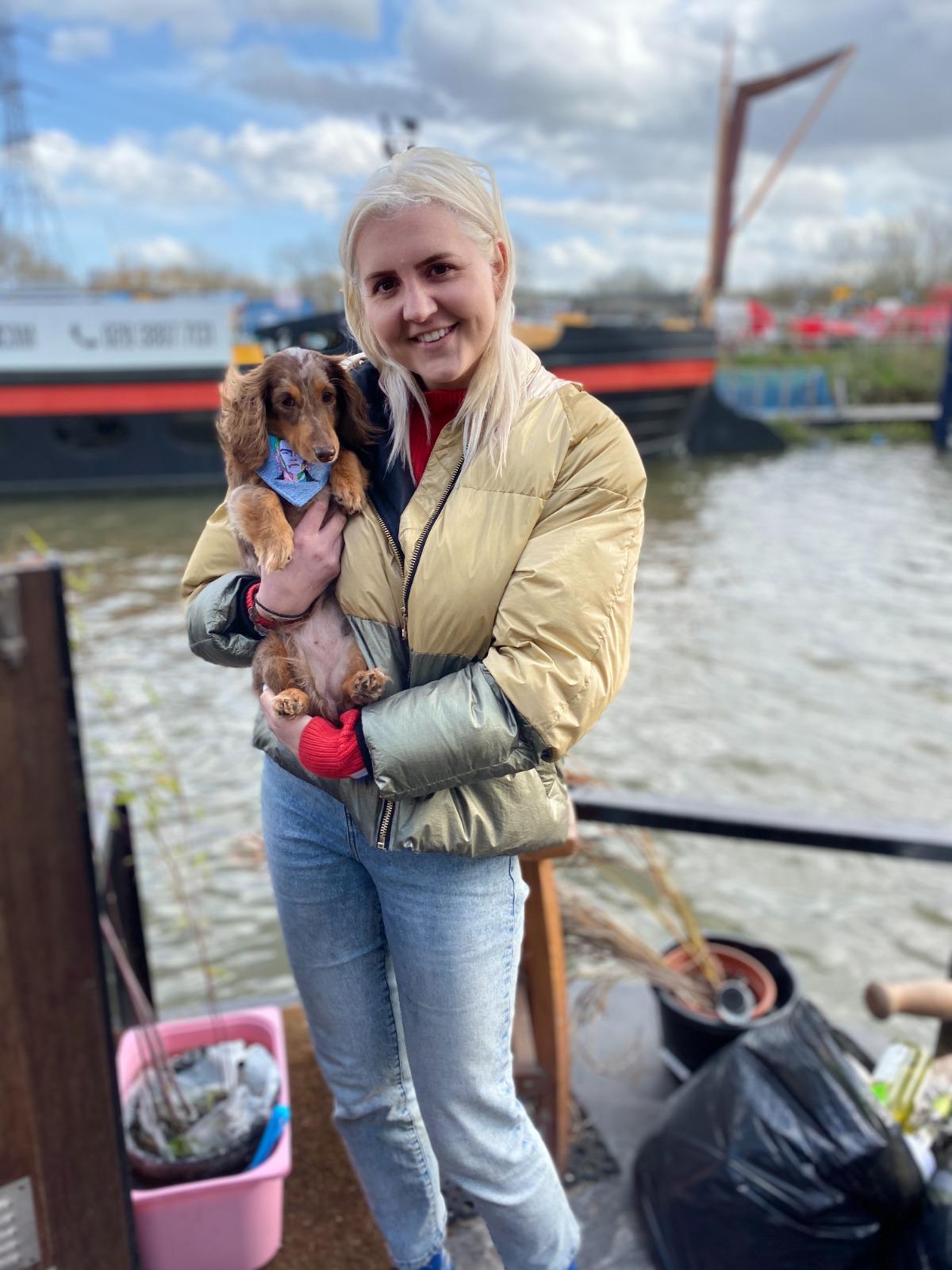 “My bosses didn't want me to leave but I had made up my mind,” she says. “I had to work three months notice but then I was out. It was reckless but just felt an enormous sense of excitement.

“Of course, people thought I was completely off my head. My parents were fuming and my pals thought I was bonkers, throwing away a great career and years of studying to live on a rusty old boat.

“But I didn’t care. I felt a huge weight lift off my shoulders. I’ve always been a bit impulsive and rather than be scared I was excited. I cleared out my rented flat, binned the workplace dresses and high heels and lopped off my long hair and dyed it blonde.”

Dorothy’s boat, Scalleywag, was moored in Sulhampstead, Berks, and the skipper she asked to help her take it to London didn’t turn up.

“So I just did my best and meandered up the river myself,” she admitted. “It took a while, there were some bumps, and I had to ask for a lot of help on how to cross locks.

“But I got there in the end. 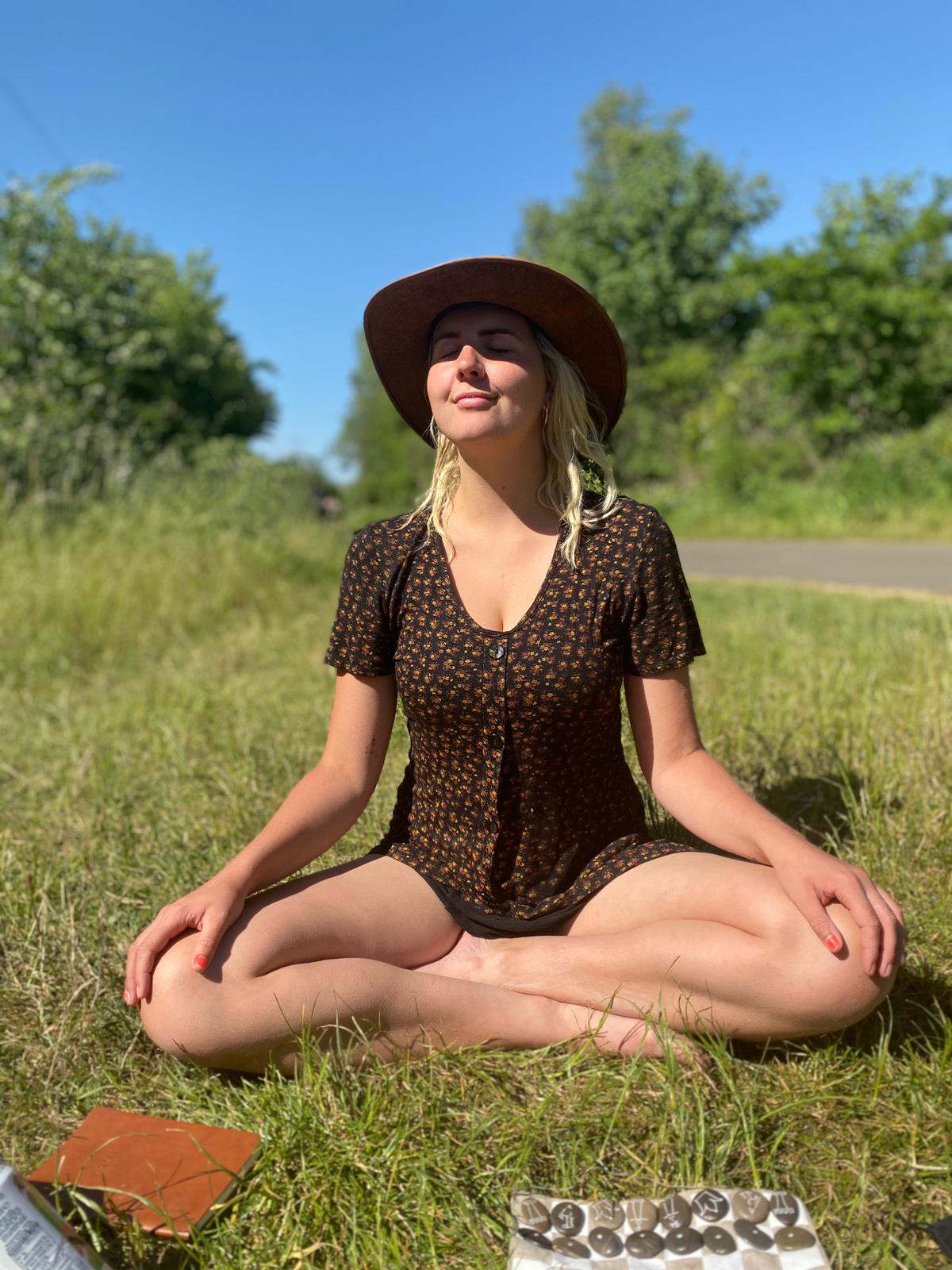 My parents were fuming and my pals thought I was bonkers, throwing away a great career and years of studying to live on a rusty old boat

“Arriving in London I joined some boat groups and they helped explain how to actually live on a canal – they're a friendly bunch.”

She paid for a licence which allows her to moor for two weeks in a canal, meaning she is always on the move. Currently in ultra-trendy Hackney Marsh, she’s been in some “real dumps”.

“Some places are pretty dangerous,” she confesses. “In Bromley-by-Bow, East London,  I was mugged which was really scary. 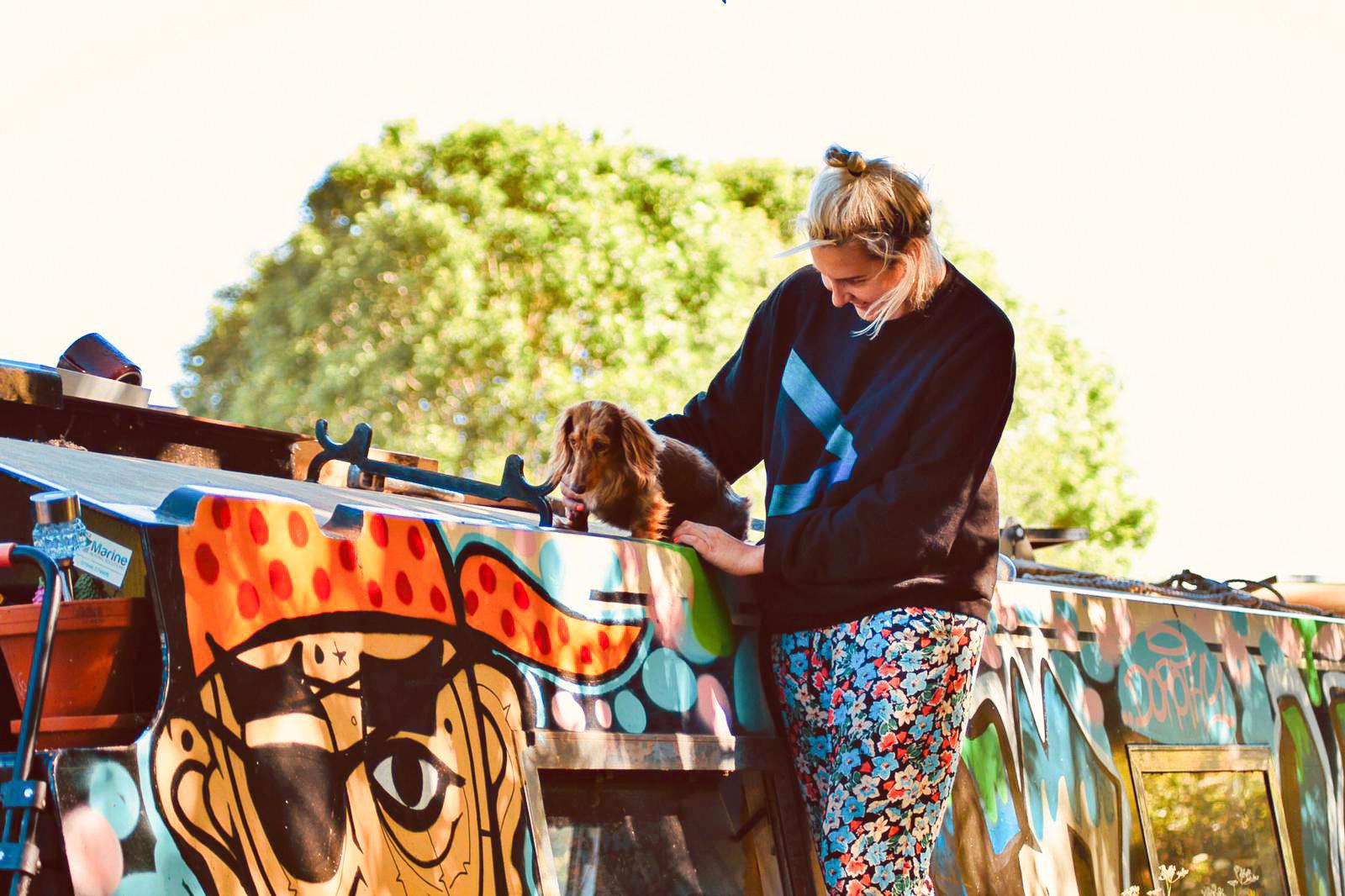 “This massive bloke came up to me, undid my rucksack but I only had books so he left.

“When my mum and dad hear things like that they are really worried, but I tell them I am OK.”

Now she is between jobs, although hopes to ultimately become a writer. 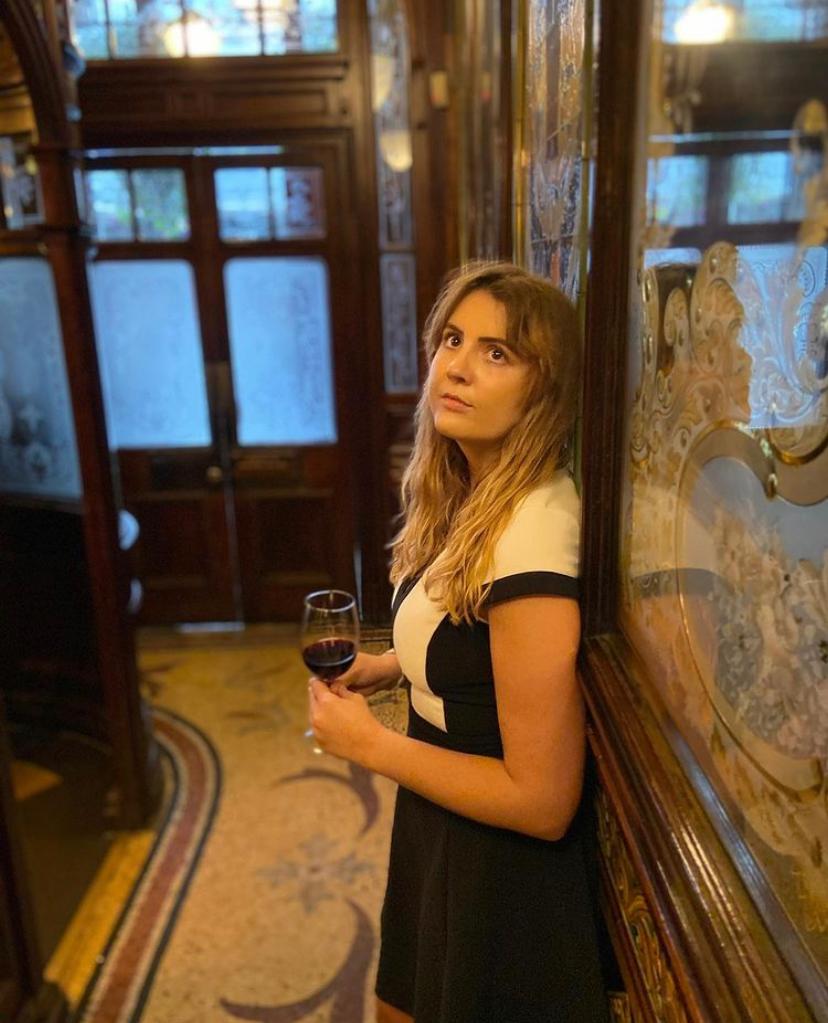 There are other changes too – largely related to her hygiene.

“I used to wash my hair daily, using expensive shampoo and conditioner,” she said. “But I have quit and now never wash it.

“It sort of washes itself now although it took six months to get there. There was a bad, greasy patch at the beginning. Because it’s dyed it is sort of dried out.

“I don’t wash often either, only once a week properly. 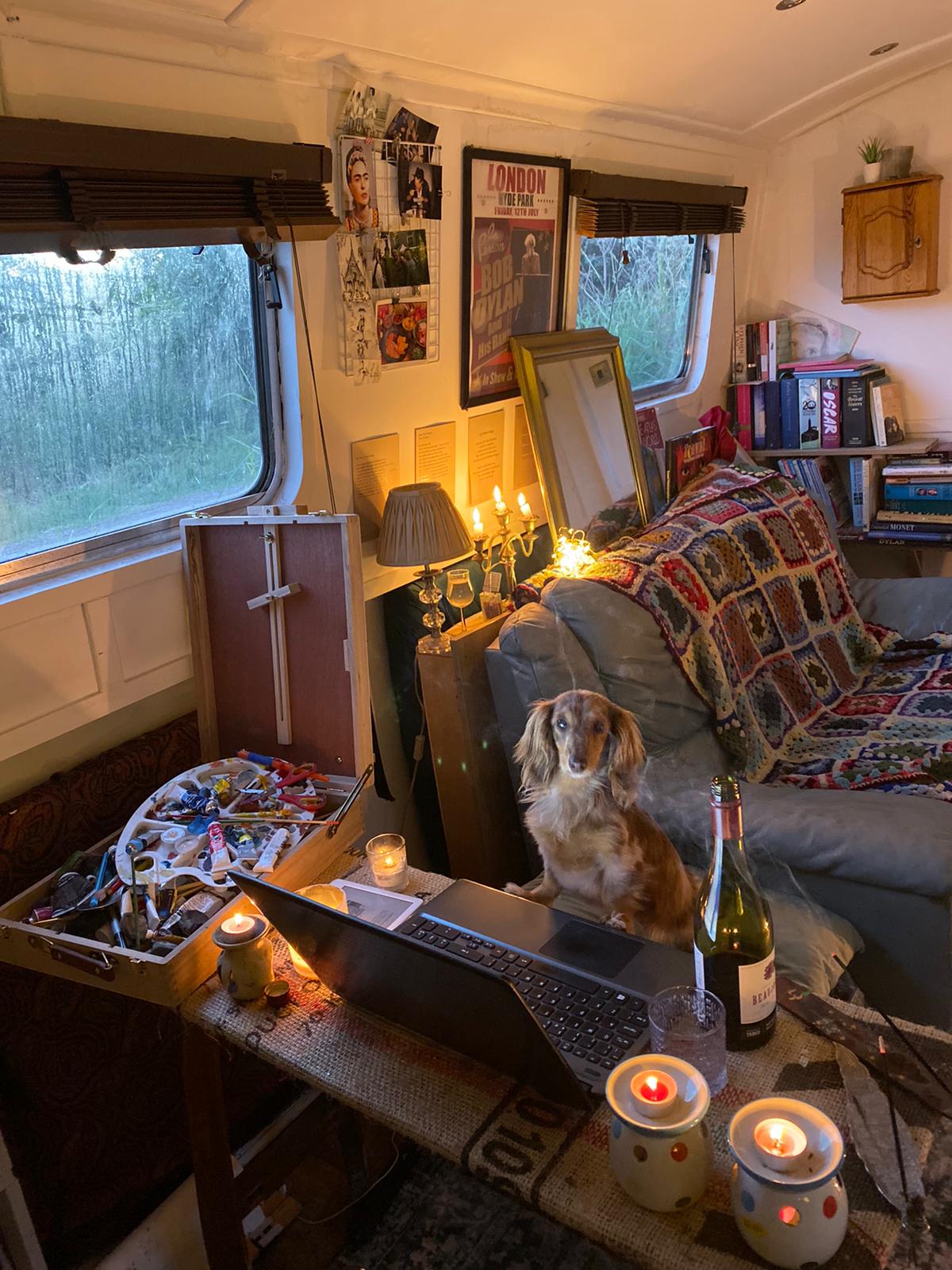 I don’t think I smell. Nobody has ever said anything.

“I use eco wet wipes to clean, and I swim and bathe in natural lakes with other boaters in the spring, summer and autumn. The lakes aren't exactly hot or clean.. but it's really fun."

“There is a shower on the boat but there isn’t enough water available so you can’t use it often.

“I don’t think I smell. Nobody has ever said anything. I use deodorant as well.

“My boyfriend, Toby, 26, who I met a year ago on the dating app Hinge doesn’t mind – he doesn’t think I smell. In fact he doesn’t wash his hair either. He lives on the boat with me but he’s leaving now – he wants to shower more.” 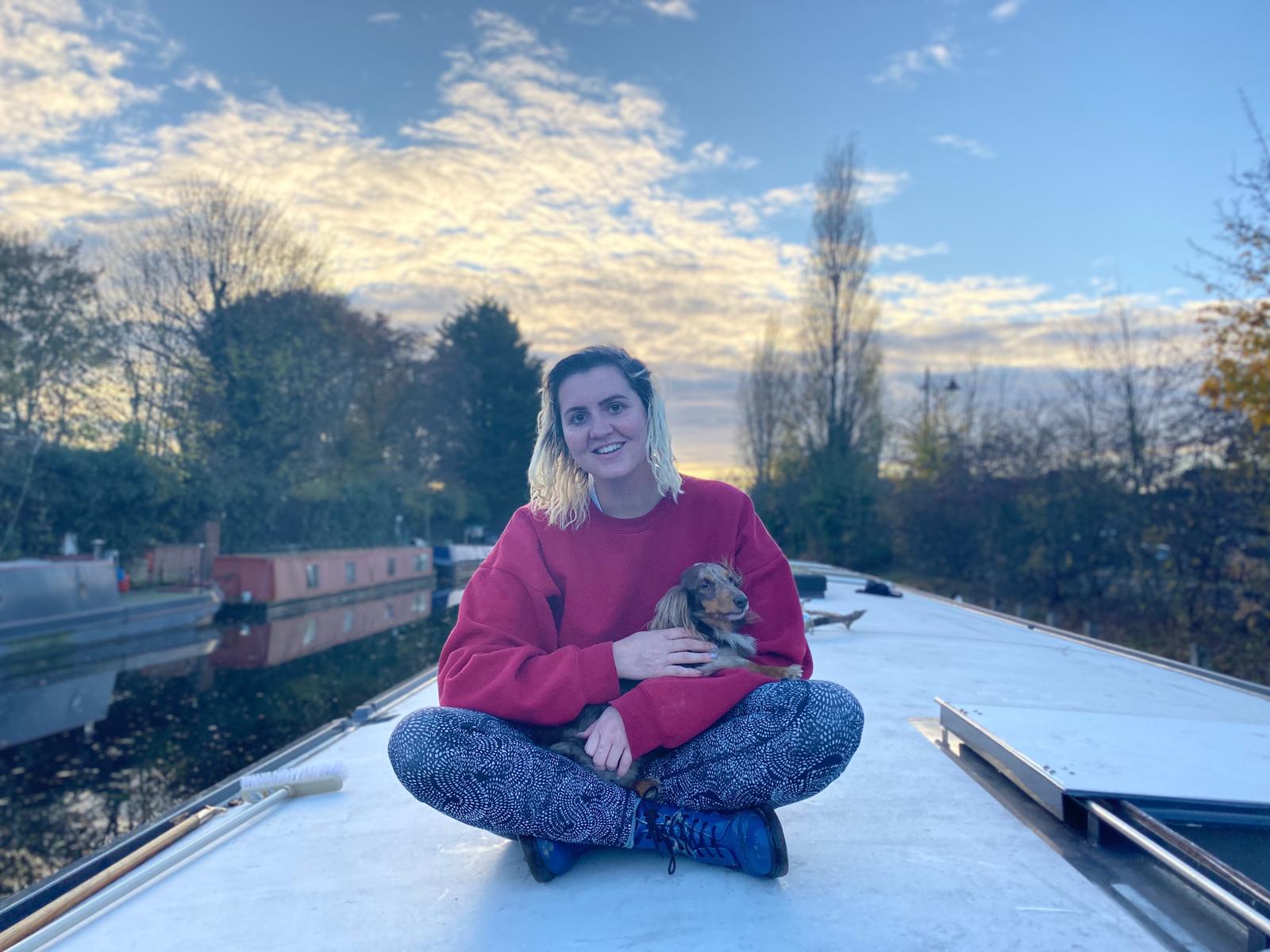 In addition to this she can’t go to the toilet on board the boat because the one she did have, a compost loo, broke – so instead uses a bucket.

“I also pop into public loos and toilets in bars and cafes when they are open. Some people might think it’s a bit miserable, especially because I used to have nice, clean office ones but I don’t care. It’s a different pace of life.

“I only wash up once every three days as it uses a lot of water – I have a water tank but it takes a long time to heat up – so crockery and dishes do pile up. I can understand that it does look a bit grim, but it doesn’t really bother me. 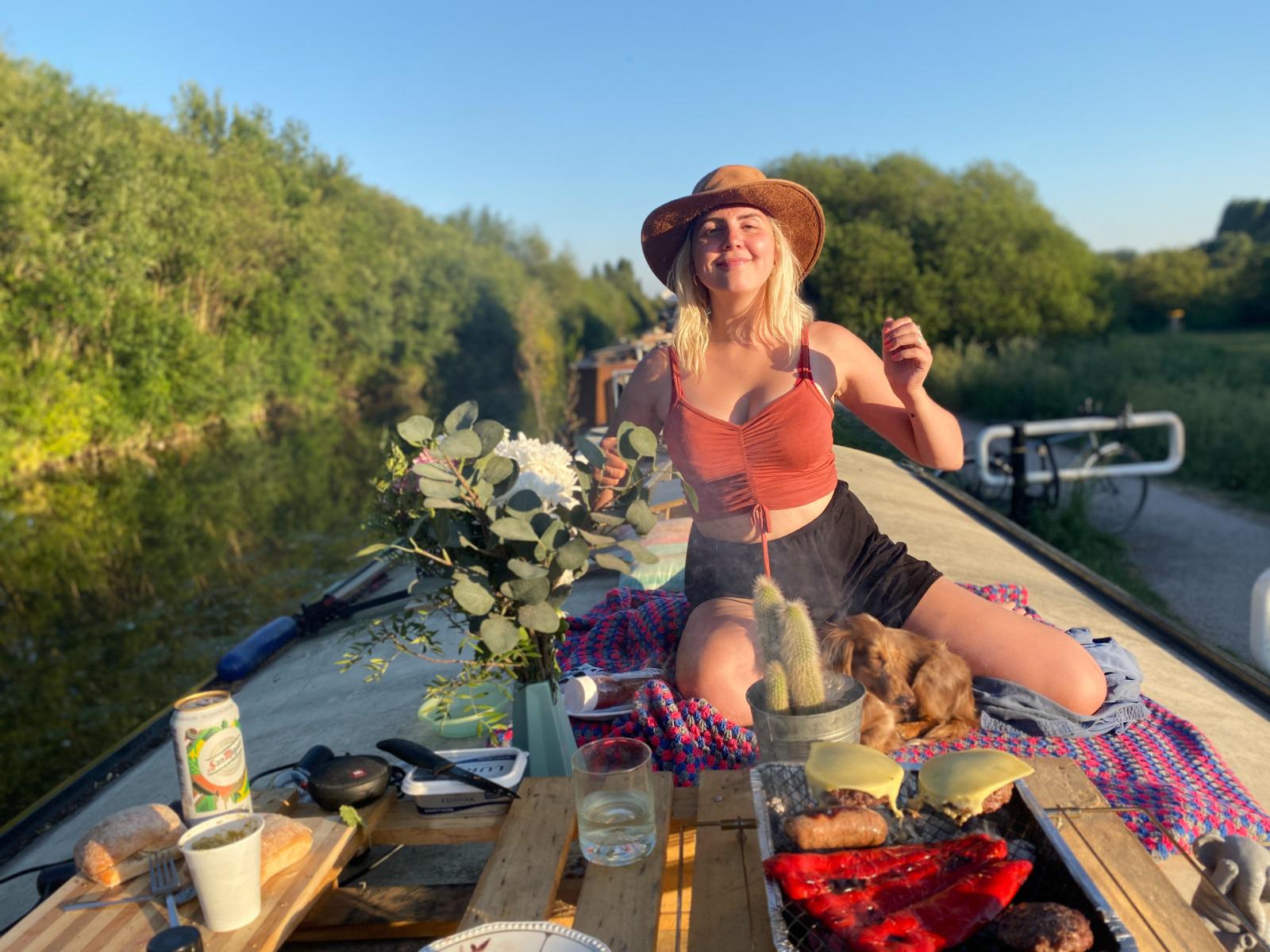 “In addition there isn’t a fridge or freezer so I am a bit stuck with what I can eat. I can only eat fresh and canned food but I make do. I don’t eat much meat, but I feel healthier.”

Dorothy admits she is “way dirtier” than she used to be but didn’t care.

She has a “little bit” of storage space but not much. “So I never buy anything,” she says. “It’s made me way less materialistic.

“All my mates are fine with it and love it, but have admitted it’s not the life they want.

“And I have saved money living on the boat. I pay no rent or bills… but of course I have no job.

“My life has changed hugely. 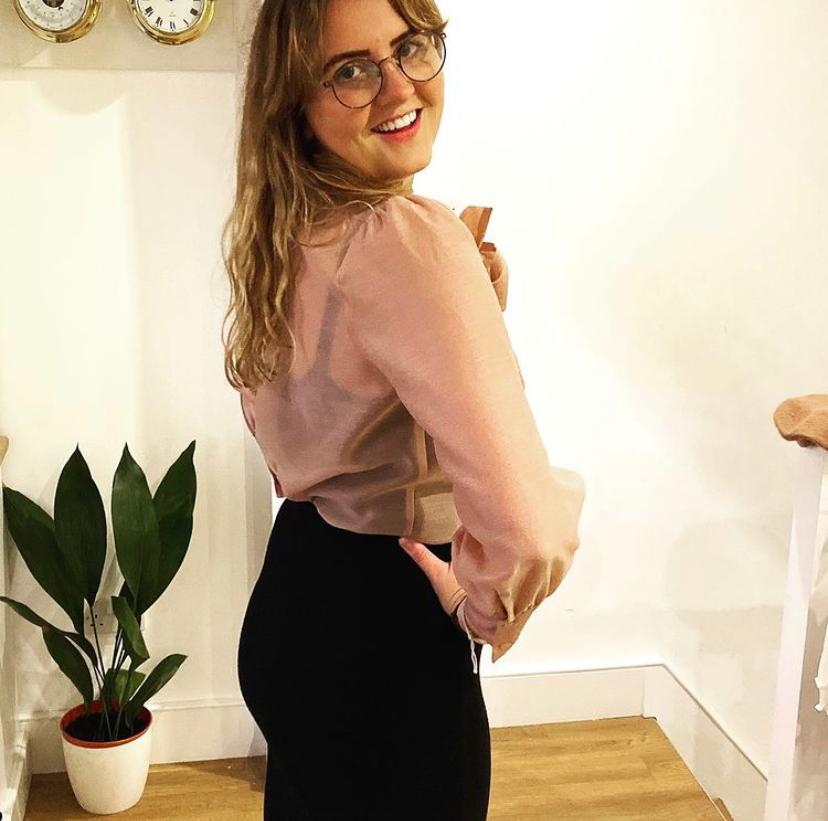 “But I don’t regret it for a minute.

“I used to be able to go on really nice holidays to places like Mexico and India.

“I could afford designer clothes and the best things. But I had no time.

“No, I might be broke, living on a boat and going to the loo in a bucket but I’m happy.

“My life is scaled down – but things are much better.”

And these are the six DIY and home renovation YouTube channels YOU should follow to transform your pad and boost its value.

While this bloke revealed how he bought five houses in the UK by age 28.

And these are the 10-minute lockdown DIY jobs that’ll add £20k to your home.

BBC Breakfast: Naga Munchetty says she was ‘put in my place’ after mocking Charlie Stayt

'Below Deck': Amy Johnson Admits Chef Ben Was Crazy To Work With but Says Chef Leon Was a Little Terrifying (Exclusive)
World News