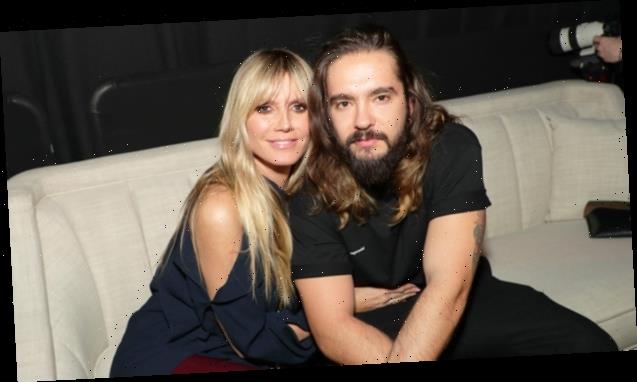 Heidi Klum and Tom Kaulitz looked so loved-up at Spotify’s Best New Artist party – and she rocked a pair of fierce latex pants like nobody’s business!

Supermodel Heidi Klum, 46, stepped out with her new hubby Tom Kaulitz, 30, at a pre-Grammys party in Los Angeles on Jan. 23  where the couple exhibited a ton of romance with one another. Although they’ve been married for 11 months, it appears the couple are still in the honeymoon phase, as they couldn’t keep their hands off each other at the Spotify Best New Artist party. The catwalk queen wore skintight maroon latex pants paired with a navy blue chiffon blouse with cut-out sleeves, showing off her toned arms. Tom wore an all-black ensemble, with his many tattoos on display and his long locks rivaling the length of Heidi’s luscious tresses. The couple posed on a couch, looking cozy, as Heidi wrapped her arms around her beau.

The pair attended the bash to support Tom’s Tokio Hotel band, who recently released a new single “Chateau”. The 30-year-old punk rocker has been touring and releasing new music; however he still makes time to attend red carpets with his ladylove. They recently snuck in some PDA at the Los Angeles premiere of Maleficent 2 in Oct. 2019. Aside from occasional public appearances, Heidi and Tom have kept their romance low-profile since tying the knot in front of family and friends in Aug. 2019, seldom appearing on each other’s Instagram feeds. Despite their 16-year age gap, Heidi says this marriage is “perfect” for her, telling HollywoodLife.com EXCLUSIVELY, “I’m just a much happier person. I feel like for the first time I have a partner who I can discuss everything with and someone who shares, you know, duties that we all have in our lives. You know, before I was always on my own with everything. And I don’t know….for the first time I get to experience what it is actually like to have a partner in all 360 with everything.”

They first made their relationship public at the Cannes Film Festival in May 2018 which led to the German musician popping the question just seven months later. The Cologne-native first wed her rockstar beau in Feb. 2019 in a secret California ceremony, pulling off the impossible task of keeping their nuptials under wraps from fans. The pair tied the knot for a second time in a fairytale Italian wedding ceremony aboard a luxury yacht in Capri on Aug. 3 2019. Their closest family and friends were in attendance where Heidi stunned in a strapless, flowing gown for the romantic ceremony.

The celebration marked Heidi’s third walk down the aisle: she was previously married to stylist Ric Pipino, 51, from 1997 to 2002, before she wed singer Seal, 56, in 2005. Heidi filed for divorce from Seal in 2012 and the marriage was finalized in 2014. Tom was also previously married: the nuptials mark his second marriage after tying the knot with Hamburg cosmetic entrepreneur and Miss Philippines Germany 2004 Ria Sommerfeld, 38, who he split from in 2016. The supermodel is also mom to four kids — daughters Lou, 10, and Leni, 15, and sons Johan, 13, and Henry, 14. We can’t wait to see more pics of the couple as they approach their one-year wedding anniversary!