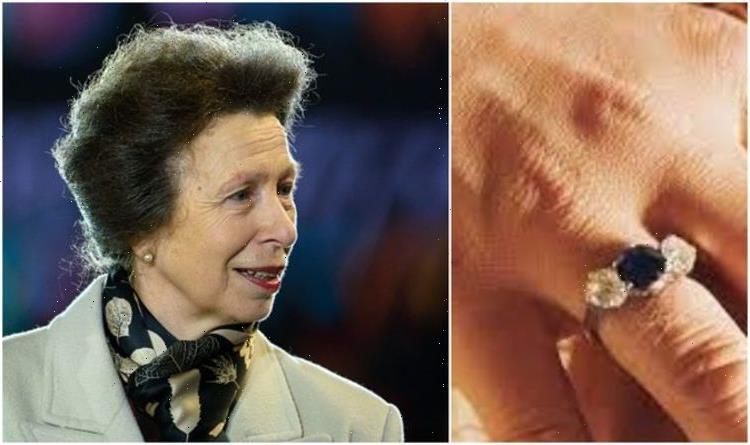 Princess Anne was the first of the Queen’s children to get married as her older brother Prince Charles, the heir to the throne, did not get married until eight years later in 1981. The Princess Royal went on to welcome children Peter on November 15, 1977 and Zara on May 15, 1981. Princess Anne married again on December 12, 1992, after meeting her current husband, Timothy Laurence.

Jewellery experts at Steven Stone have analysed the incredible engagement rings Anne received, both of which broke royal tradition at the time.

Leading engagement ring specialist, Max Stone, spoke to Express.co.uk about everything royal fans need to know about these incredible gemstones.

“Blue sapphires are often linked to people who are respectful, loyal, hardworking, and honest, which only makes these rings even more special, and this perhaps could have meant something to Princess Anne.

“Both her rings are beautiful, however, neither of the centre stones are overstated.

“Princess Diana also famously had a blue sapphire ring, which is now in the hands of Kate Middleton, while the Queen is frequently seen sporting the gemstone on her famous brooches.

“It’s clear the Royal Family are huge fans of sapphires, a stone which is traditionally believed to attract abundance and blessings.

“Historically it has been used to protect against negative energies, as well as calm the mind, strengthen intuition, and invite spiritual clarity, so it’s no wonder the royal ladies love them.”

Princess Anne’s most recent engagement ring, given by Timothy Laurence, features an oval cabochon cut blue sapphire, which is around two to three carats.

The cabochon gem is set in yellow gold, framed by a cluster of three small diamonds.

Although it looks very similar to her previous ring, it is very unique.

This three side-stone cluster design has not been seen on any other royal engagement ring and broke tradition at the time.

Steven Stone experts estimate it to have a value of around £25,000.

Timothy, a commander in the Royal Navy, met Anne while he was serving on the Royal Yacht Britannia.

The pair were married in late 1992, however, rather than a lavish royal ceremony, the event had to take place in Scotland since the Church of England did not allow remarriages after divorce.

The Princess Royal wore a simple, elegant white suit and added a small spray of flowers to her hair instead of a veil.

The royal couple kept their relationship private and low-key and were rarely photographed or seen together.

In terms of Princess Anne’s first engagement ring, Royal jeweller, Garrard, created it “to her specifications”.

The centre stone on this ring is also a blue cabochon sapphire, however, this one is flanked with just one diamond on either side, rather than a cluster.

It is traditionally set on a yellow gold band, using Welsh gold, like most royal rings, and it is slightly lower in value than her updated ring, with a value of around £10,000.

A spokesperson for Steven Stone told Express.co.uk: “Choosing a minimalist design can really accentuate a centre stone, and Princess Anne’s engagement rings did exactly that.

“The eye-catching design teamed with a more modest-sized stone makes them neither showy nor overpowering.”