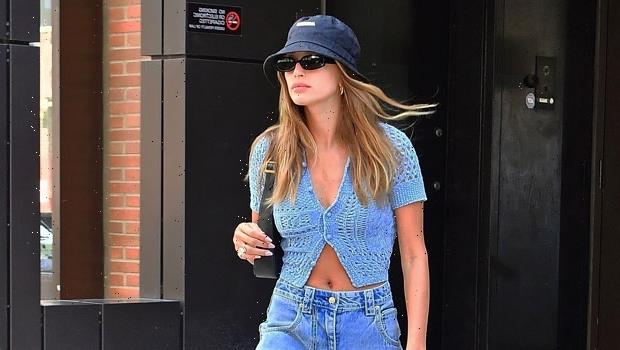 Hailey Baldwin topped her throwback look with a super trendy Jacquemus bucket hat as she headed to a laid back lunch date on Sept. 11.

Hailey Baldwin, 24, just turned the streets of NYC into her very own runway. The model channeled the late ’90s with a cropped, short sleeve cardigan by Eytys, along with a pair of the Stockholm-based label’s loose fitting boyfriend jeans as she left her hotel for lunch on Saturday, Sept. 11. Hailey added a bucket hat from Jacquemus — best known for their micro Chicquito handbags — to her ensemble, along with a black shoulder bag.

Hailey is in town for New York Fashion Week alongside husband Justin Bieber, 27, who was spotted out on the same day rocking head-to-toe Drew House (his own streetwear label that he launched back in 2019). Ahead of touching down in New York, Justin and Hailey stopped in Philadelphia where they were photographed on a romantic date night. Hailey opted to wear a flirty pair of daisy duke jean shorts for the outing along with an oversized blazer and zebra print Bottega Veneta clutch, while Justin sported a yellow plaid blazer shirt and pants. 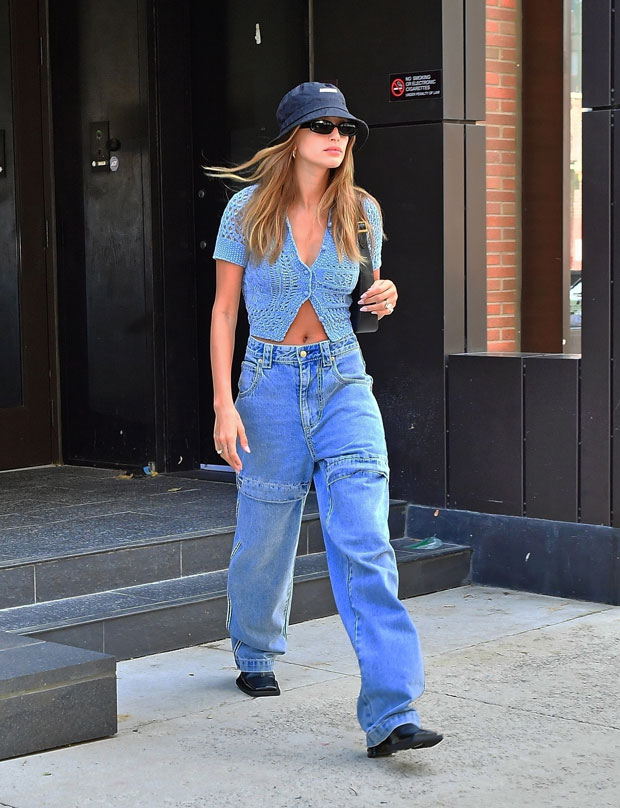 The 24-year-old model has been slaying her campaigns lately, recently starring in a new Jimmy Choo shoot dubbed “Time To Dare.” She rocked a series of different outfits for the epic campaign, including a high cut black one piece swimsuit with a bubblegum pink pump. In another, she looked runway ready in a ’90s inspired slip dress and bright red to-the-knee high heeled boots.

Justin and Hailey are in NYC for NYFW, and, presumably, to make an appearance at the upcoming Met Gala on Monday. The pair have yet to attend the event together since marrying in Sept. 2018 (followed by a lavish ceremony in Sept. 2019). Hailey last appeared at the event solo in 2019 in a memorable (and custom) Alexander Wang gown which included an eye catching thong design. In 2018, Hailey attended the glam event with date Shawn Mendes, 23. Shawn and Hailey’s romance was short lived, however, as she reunited with Justin shortly after — making it legal within just a few months!