Home » Fashion » Girl shames cheating boyfriend looking for a hotel room hook up on Tinder – so could this be YOUR boyfriend? 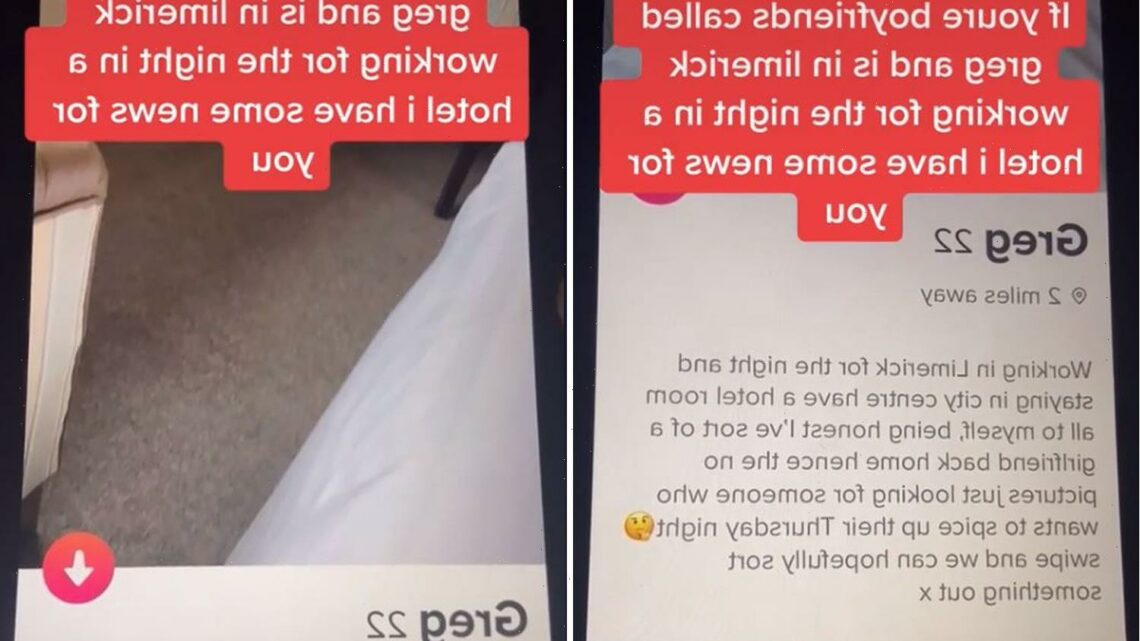 Girl shames cheating boyfriend looking for a hotel room hook up on Tinder – so could this be YOUR boyfriend?

THINKING about cheating on your partner? Then you probably shouldn't do it so publicly, as nine times out of ten you're going to get caught.

Case in point – one bloke who was working away from home for the night and decided to turn to Tinder to find himself a hotel hookup, only to be outed on social media. 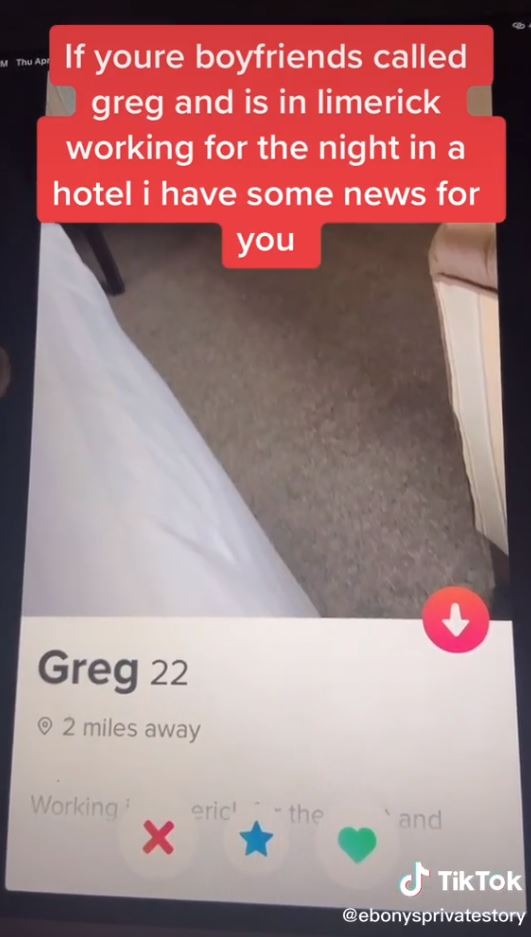 TikTok user @ebonysprivatestory came across the man, named Greg, who openly revealed he was in a relationship, but was looking for some "company" while spending the night in Limerick, Ireland, on business.

Deciding to call him out, she shared his Tinder profile online in a video posted to TikTok, that has been watched over 200k times.

She said: "If you're boyfriend's called Greg and currently working in Limerick for the night in a hotel, I have some news for you."

Scrolling on her phone, she revealed Greg's Tinder profile that included pictures of his hotel room and said: "Working in Limerick for the night ad staying in city centre have a hotel room all to myself. 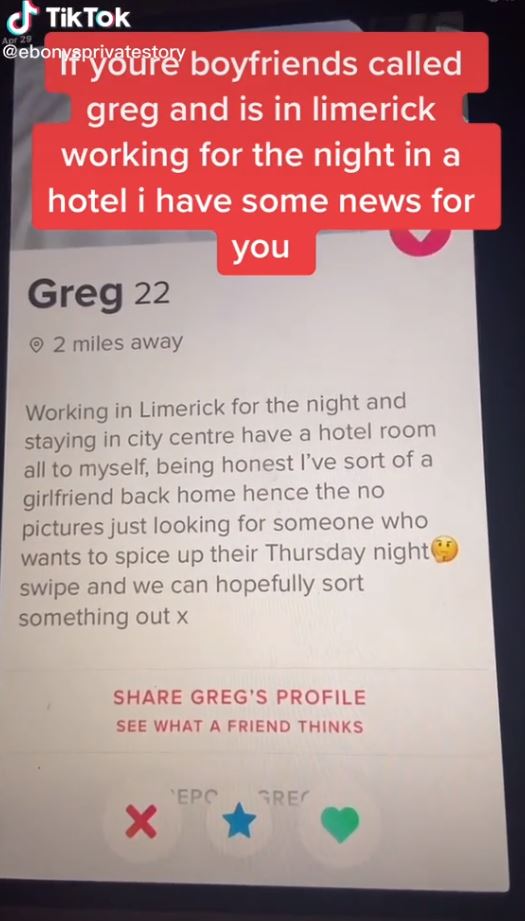 "Being honest I've sort of a girlfriend back home hence the no pictures, just looking for someone who wants to spice up their Thursday night."

Greg, who listed his age as 22, signed off: "Swipe and we can hopefully sort something out x."

Hundreds commented on the video, with many praising the girl for calling out the guy publicly online.

"Absolutely love this huge respect well done girl we all need to be like this n it would save so much hurt n broken hearts!!! (sic)," wrote one person.

Another said: "Girls standing up for each other."

It seemed to hit home, as one woman revealed: "Omg this is my worst fear as my man sleeps in a hotel every week while he works away."

Others suggested that the man had covered his back and probably chose to use a fake name, with one person posting: "I'm guessing Greg's name isn't actually Greg. He has no reason to use his real name."

Another agreed: "Think he is probably not using his real name. If he has any sense anyway!"

Real name or not, the girl who shared the video still thought it was enough to catch the culprit, as she replied: "Obviously it's a joke, but someone's gonna know if their boyf is working in Limerick and staying for the night, can't be that many staying in hotels (sic)."

"Greg's a chancer," wrote one viewer, while another person joked: "Sounds like such a catch."

"Oh Greg what have you done," said one more. "Probably don't sort of have a girlfriend anymore…"

Meanwhile, one girlfriend claims she caught her boyfriend cheating by spotting his FINGER in another woman's snap.

Plus, one woman busts her cheating boyfriend after cringe live photo fail shows another woman on his bed.

And another scorned girlfriend decided to get her own back on her cheating boyfriend by covering his ENTIRE wall in messages he'd sent other girls.

21 Leo celebrities: Which famous faces have the Leo star sign?