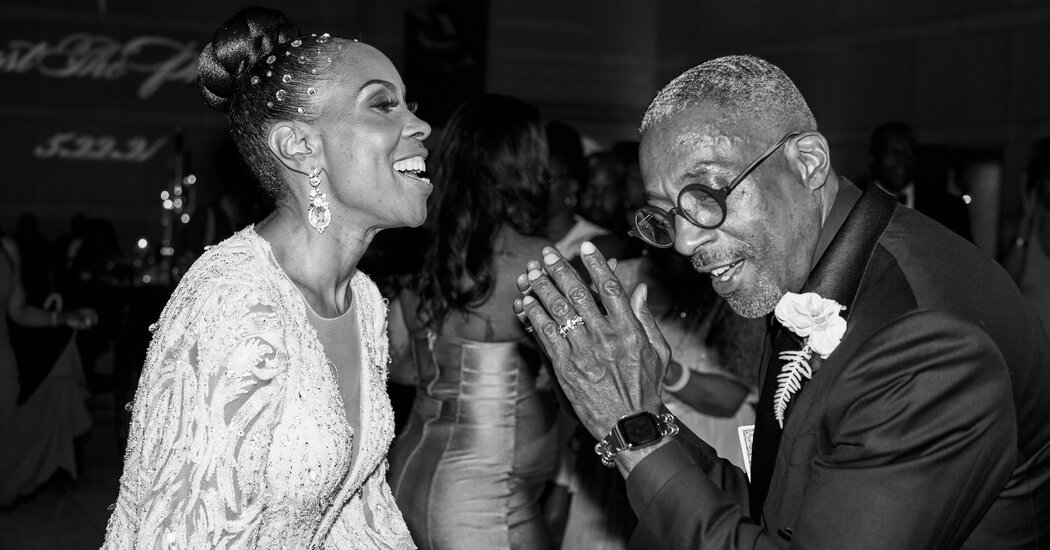 Finding a Love Connection on Zoom

On May 22, after the planning was finished, the attire selected, the menu carefully curated and the guests assembled, Cheri D. Spigner had a moment to stand on a balcony and get a covert, bird’s-eye view of her wedding ceremony. Guests were neatly arranged, seated on chairs that formed a pair of circles around an altar. Two of the chairs lay empty: A tribute to Ms. Spigner’s mother and father, who are both deceased. Ms. Spigner’s mother had died earlier that month. So when Ms. Spigner saw the empty chairs, she said, she “almost started crying.” For comfort, she locked her eyes on her soon-to-be husband, Tracey D. Syphax, who stood at the altar.

“I remember thinking, ‘if I look at Tracey, I’ll be able to get through it,’” Ms. Spigner said. “I just knew I would get a sense of serenity from him, a sense of peace. I knew that the overwhelming anxiousness that I felt would calm down.”

Ms. Spigner and Mr. Syphax had met about a year earlier, in April 2020. Ms. Spigner, 51, a sales director for Zimmer Biomet, a medical device company based in Warsaw, Ind., was then a fairly recent arrival in Philadelphia. She had moved there in 2016 from the San Francisco Bay Area, where she has spent most of her life. She grew up in Richmond, Calif., then earned a bachelor’s degree in business administration from Holy Names University in Oakland, Calif., and a master’s degree in leadership and organizational development from Saint Mary’s College in Moraga, Calif.

In early 2020, Ms. Spigner was enjoying the change of pace brought on by her eastward move. She explored Philadelphia. She went on some dates there, too. She was “single but in a mind-set of knowing that I wanted to be married,” she said. And she still identified as a West Coast woman. So when the arrival of the coronavirus pandemic forced her to turn to online dating — a first for her — she chose a user name that reflected her Northern California roots: BayLove.

To Mr. Syphax, 58, the name BayLove was probably more likely to evoke Atlantic waters. A lifelong New Jerseyan, Mr. Syphax is the chief executive of the Phax Group, a construction and real estate company in Trenton, N.J. He is the author of “From the Block to the Boardroom,” a memoir about his path from being incarcerated for a period as a young man to becoming a successful businessman. In 2014, Mr. Syphax was named a “Champion of Change” by the Obama administration, in recognition for work he has done to create employment opportunities for formerly incarcerated Americans.

Unlike Ms. Spigner, Mr. Syphax had used online dating services before the beginning of the pandemic. The user name “BayLove” caught his eye — especially after he saw that Ms. Spigner “had the smile to go along with it,” he said.

The couple dated online for nearly two months before they ever met in person.

[Sign up for Love Letter and always get the latest in Modern Love, weddings, and relationships in the news by email.]

“Zoom calls, Zoom movies, Zoom candlelit dinners — we did everything Zoom,” Mr. Syphax said. They replicated the experience of going out to a comedy club together, queuing up a Cedric the Entertainer special in tandem in their separate homes. They laughed with each other over video chat, wailing over Wi-Fi.

Both Ms. Spigner and Mr. Syphax agreed that there were advantages to this remote form of getting to know each other.

“We had an opportunity to really see each other in our natural states,” Mr. Syphax said.

“No facials, no eyebrow arches,” Ms. Spigner added. (Mr. Syphax noted that he accidentally cut a patch in his hair while giving himself a trim in their early weeks of dating — the ultimate test of Ms. Spigner’s interest.)

But the blooming of their romance felt new and different for reasons unrelated to the pandemic. Mr. Syphax had been in a previous marriage for 33 years. (That marriage ended in divorce.) Ms. Spigner had decades of experience in relationships, including a previous marriage that ended in 1995. The two felt themselves bringing lessons from those experiences into their new relationship, in ways that bolstered their ability and willingness to communicate with each other about what they needed. “If I don’t know who I am and what I want,” Ms. Spigner said, “I can’t really communicate that to someone else.”

In late May 2020, after weeks of virtual dating, Ms. Spigner invited Mr. Syphax to her home for an in-person dinner. He accepted.

He was surprised by what he found when he showed up.

Looking to replicate a restaurant dinner date, Ms. Spigner had arranged for a chef friend to cook a multicourse dinner, complete with menus and restaurant-style place settings. She hired a violinist to perform a live soundtrack from a corner of her dining room. (A few highlights from the set list: Nat King Cole’s “Unforgettable,” Michael Jackson’s “Butterflies” and Bobby Caldwell’s “What You Won’t Do For Love.”) She didn’t tell Mr. Syphax about any of this beforehand.

“It completely blew my mind, the effort and the thought that she put in that,” he said.

They started spending more time together in person after that night. Daytime outings were a favorite during that spring and summer. Mr. Syphax owns a 1979 Mercedes-Benz convertible, which he and Ms. Spigner used to cruise along the Jersey Shore. They had picnics on the water in Asbury Park. (When it comes to food, Ms. Spigner said, “Tracey is an East Coaster; I’m a West Coaster. So I’ll eat olive tapenade and tuna tartar, and Tracey likes pork rolls.”) Ms. Spigner took Mr. Syphax hiking, which was a new activity for him.

“It was a very natural, ‘granola,’ way of getting to know each other,” Ms. Spigner said. “It was not the dinners, the cocktails, the rooftop bars.”

When the protests and larger movements responding to the murder of George Floyd began that summer, Ms. Spigner and Mr. Syphax bonded over shared feelings of grief — and a motivation to meet the moment. Ms. Spigner pushed for discussions about diversity within her company, conferring with Mr. Syphax about how best to approach those conversations.

“I got the opportunity to see her act in the corporate world via Zoom,” Mr. Syphax said, “to see how she presents herself and how she drives home the point, ‘We have to do better as a corporation when it comes to issues that affect African Americans.’”

“Her having that conversation as one of the only Black women there,” he added, “was just a testament to who she was.”

By the second half of 2020, Ms. Spigner and Mr. Syphax’s lives were intertwined. They developed routines; exercising together, livestreaming church on Sunday mornings, checking in with each other each week to talk about their lives and their relationship.

“We hold hands when we go to sleep,” Ms. Spigner said. “He gets up in the morning but then he gives me a kiss and he just kind of lays back on my chest and that’s how we start the day.”

Mr. Syphax proposed on New Year’s Eve last year. While the uncertainty of the pandemic era made it so they had to be limber in their plans — they went through several iterations — he and Ms. Spigner ultimately decided to hold the wedding on May 22, a year after they first met in person. They chose the National Constitution Center, a Philadelphia museum focused on the history of the Constitution of the United States, as their spot. It was a meaningful choice for both of them: They were drawn to the idea of celebrating Black love in a building devoted to a foundational American document, in a city that houses both the Liberty Bell and sites that were once stops on the Underground Railroad.

“Being at the National Constitution Center, in the center of the start of this country, was really symbolic of American history and African-American history, and the integration of that,” Ms. Spigner said.

So May 22, after Ms. Spigner had taken a moment to look down on the ceremony from the second floor of the museum’s lobby, she descended the stairs and joined Mr. Syphax in the center of the circle of chairs. The couple were married by the Rev. Simeon Spencer, a Baptist pastor, in front of about 80 guests. It was a bicoastal event: Ms. Spigner’s relatives, including a half brother and an aunt, traveled from the West Coast, where they got acquainted with the East Coast-based members of Mr. Syphax’s family.

“And Tracey was so excited when he was walking in, he still had his phone in his hand,” he said. “Someone had to come get it. You could tell they were both excited to get it done and they were rushing — not the ceremony — but rushing to finally get married.”

Where The National Constitution Center in Philadelphia

The Vendors The couple chose almost exclusively Black-owned and woman-owned businesses to supply the materials for their wedding. These included Royal Cake Creations, the floral design business Event Loft and DJ Fatha Ramzee.

The Can’t-Wait Kiss “Tracey tried to kiss me prematurely,” Ms. Spigner said of the groom’s eagerness during their ceremony. “And the pastor was like, ‘Hold on, brother.’”

The Dance Crew Ms. Spigner hired a dance crew to perform at the ceremony as a surprise for Mr. Syphax. “Tracey loves Donna Summer, Tracey loves disco,” she explained. “I just wanted to think of something unique to surprise him with.” It worked. “I was in another world,” Mr. Syphax said. “It was great. I was jamming.”

Listen To This: Heavenly!