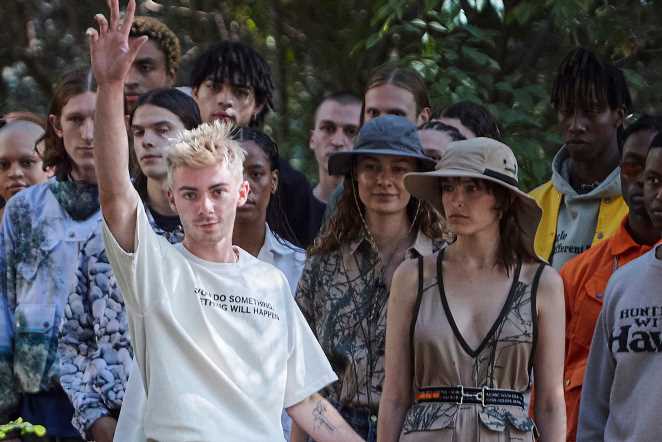 Under normal circumstances, a city-stopping snowstorm could lead to no-shows, last-minute cancellations and late arrivals. But none of the above were factors at the Fashion Group International’s Rising Star awards Thursday, which were held virtually for the first time.

Weather, like travel, were non-issues for numerous attendees, who watched Aknvas’ Christian Juul Nielsen and Epperson’s Rodney Epperson share the Womenswear award. After Anna Sui named the winners, Epperson chalked up his win to perseverance. Nielsen then followed up with his own thanks, adding that designers such as himself need support now more than ever. “FGI was founded by 17 women who banded together to support and promote the role of women in the industry,” he said, noting that he created his company to meet a similar goal of empowerment for women.

Reese Cooper locked up the Menswear honor for his signature collection. After accepting the award from Oscar de la Renta’s Laura Kim and Fernando Garcia, Cooper was succinct in thanking FGI and noting the amount of behind-the-scenes work that goes into such awards when Zoom rules all.

Before all of the winners were unveiled, the Grammy-nominated R&B duo Chloe x Halle shared some advice with the young creatives, including listen to yourself, the creative process is messy, don’t be afraid to dig in, stay the course even if you get discouraged and find a mentor.

Halle said, “Like all of you Rising Stars know, the real work is done unseen and often in silence. As artists, everyone gets to see all of those magical moments at a performance or hear the the final version of a song. But they don’t get to see the thousands of hours of real work that went into creating those seemingly flawless, sometimes not-so-flawless magical moments. And that’s true for anyone creative. We’re here to say we see you. We know what it takes to be a Rising Star, that’s why we are so proud to talk to you.”

During cameo appearances, designers such as Donna Karan and Brandon Maxwell offered encouragement to the crowd. Karan said, “There’s never been a more challenging and inspiring time to create the fashion history of the future as there is today. As I’ve always said, ‘It’s not about me. It’s about the we and coming together as a community to create, collaborate and communicate so that we can not only dress but address what’s needed to create the industry of tomorrow.’”

Maxwell, a 2016 Rising Star winner, acknowledged how being creative in these unstable times can be confusing and uncertain. “We are fortunate enough to work in an industry where on our best day our job, our only job, is to go into work and to help someone to feel their best. I encourage everyone to look at this time as a positive. Sometimes in the darkness and the sadness we are pushed toward the light.”

Rick Owens and Michele Lamy appeared to present the All Gender Product award to APOTTS’ Aaron Potts. The designer said, “The expectations of traditional gender expression are so confining for some people. I hope to offer something that allows people to exhale, to go deeper and to embrace every part of themselves — their creativity, their inspirations and their self expressions. The more that we can do that for ourselves, the more that we can do it for each other.”

As a sign of the strength and breadth of the accessories market, FGI has two different Rising Star awards for that area. The first for Accessories-Scarves/Fashion Jewelry was handed to Rory Worby Studio’s Rory Worby. The second Accessories award for handbags/footwear went to Aera’s Tina Bhojwani and Jean Michel Cazabet. The duo were two-time winners Thursday. Aera’s founders also picked up the Fekkai Sustainability award.

Dee and Tommy Hilfiger also gave listeners a fight talk in dealing with the global pandemic. “We’ve learned that times of collective hardships have a way of changing our priorities for the better. For instance, the fashion industry has come to realize that we need to drastically alter our framework to be more dusty and more inclusive.”

Tommy Hilfiger said, “We all know that you will help drive this positive and meaningful change.”

While hundreds of apparel companies are scrambling to invent and adopt more imaginative retail concepts, Fashwire was recognized for its innovation. The Seattle-based company took home the New Retail Concept award. Fashwire is a global platform showcasing apparel and accessories from more than 300 designers on its site and via its app. Collectively, the creatives represent more than 30 countries.

Tuning in from the comfort of their own homes, guests watched FGI deliver the inaugural Rising Star award for Home Product Innovation. New York City-based Hazy Mae won that for her Hazy Mae Cookie Jar Maker business. Mae sculpts and handpaints all of the cookie jars that she makes with monochromatic color palettes and fashion-infused whimsy. Reinventing classic cookie jars from the Twenties through the Fifties to create ones with a more modernistic edge, Mae’s ceramics are keepers. Accepting the award virtually seated in front of a backdrop of her creations, Mae was startled to be greeted with an off-camera horn salute.

Jason Wu was another guest designer, who reminded attendees to never stop learning, to remain curious, to give back and to foster the next generation of designers. “With the changing market, we need to be prepared to help those who are talented to be able to navigate the changing industry. I’m so happy that FGI continues its mission to celebrate talent and diversity.”

Before the awards were distributed, FGI’s president and chief executive officer Maryanne Grisz plugged the event’s sponsors Hearst, Hilldun, Fekkai, Diesel and Pullquest. She also noted that 350 students were listening in, thanks to a give-back initiative.