Get Nicholas Knightly talking about the use of color in handbags and his passion is palpable.

Moynat’s new creative director, who joined the brand last July after more than 15 years at Louis Vuitton, has just unveiled his first designs and there’s a mysterious and engrossing peacock blue, a fiery pink that teeters on orange and a vivid green that’s somewhere between mint and kelly — and no black leather in view.

“We really celebrate color and it’s a big, big part of the brand,” Knightly enthused. “You’re seeing a diverse range of colors and the individual clients connect with those individual, beautiful colors and can find that beautiful bag just for them. To me, that’s the highest end of luxury.”

In exclusive interviews, Knightly and chief executive officer Lisa Attia, who joined Moynat a year ago from Sephora, said they leaned into the rich archive of the 19th-century trunk-maker and discovered many “untold stories,” such as its savoir-faire with locks.

They are also projecting the brand further into the modern age with more hands-free carrying options, a new e-commerce site loaded with storytelling, and its first image campaign, which exalts handbags as larger-than-life objects plunked in a range of very Parisian rooms.

Moynat is five years older than Louis Vuitton and was best known for its lightweight, waterproof trunks for automobiles. Arnault set up shop for Moynat in 2011 on the Rue Saint-Honoré steps away from the privately owned Goyard, another 19th-century trunk-maker restored to glory.

With its modest retail footprint and low-key communications, Moynat stands out from the other luxury behemoths in Arnault’s family-controlled empire — which also includes Dior, Fendi, Givenchy and Celine.

Moynat is controlled by the family-owned Groupe Arnault, but Sidney Toledano, chairman and chief executive officer of LVMH Fashion Group, has taken on oversight of the brand, whose popular Mini Réjane handbags retail for about 4,000 euros.

“Artisanal craftsmanship is at the heart of Moynat,” said Toledano, who holds the title of chairman at the elite leather goods firm. “It is the moment to reassert Moynat’s brand notoriety and desirability through new creations and to continue craft preservation. For a brand with such strong heritage and legitimacy, the opportunity here is to widen the craft appreciation to a younger audience and for them to discover the wonder of Moynat.” 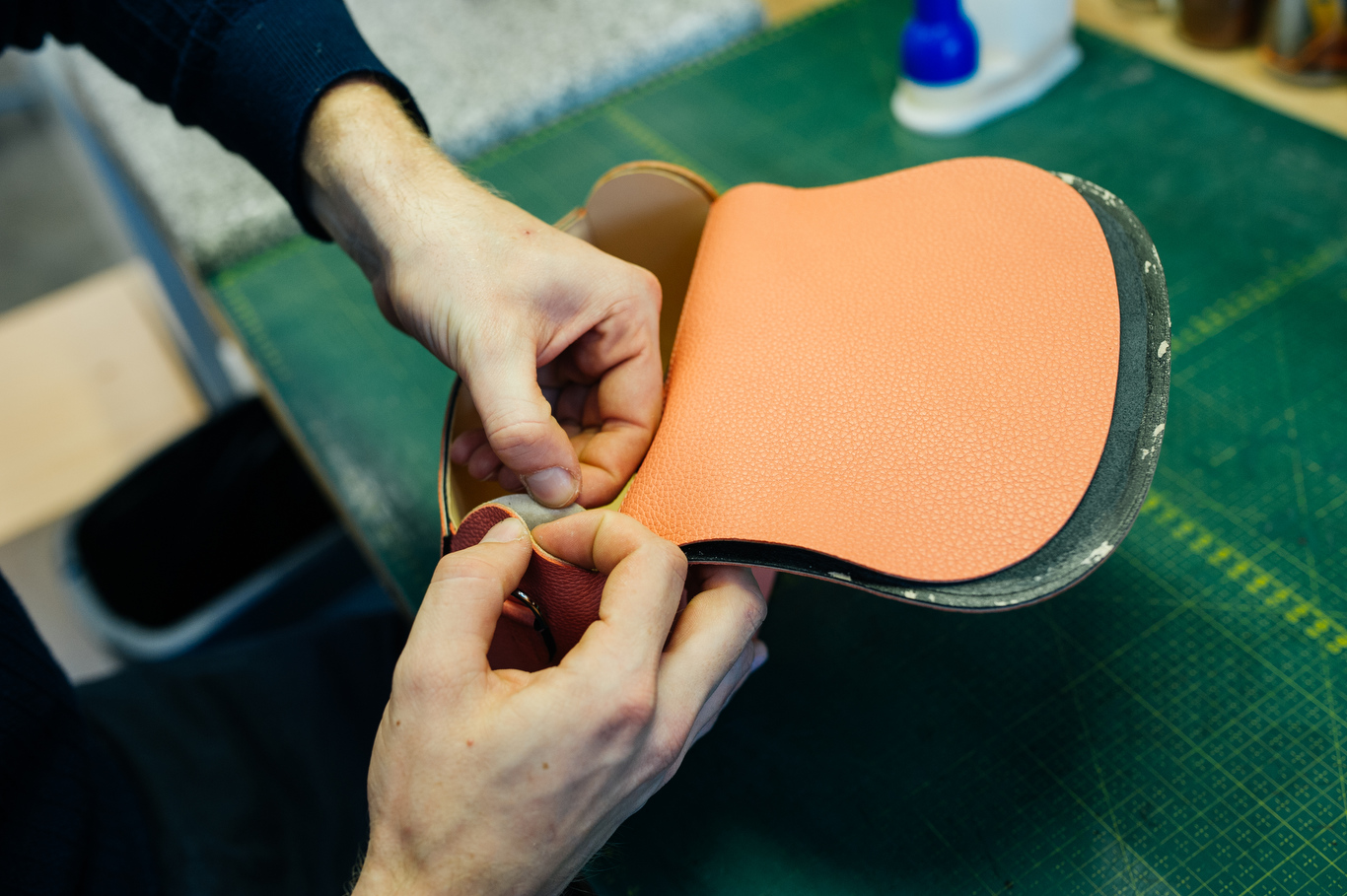 While more of a stealth player, Moynat has accrued a loyal following for its artisanal approach based on rare raw materials and haute savoir-faire. Market sources estimate the brand does about 50 million euros in revenues, and is poised for a new growth phase fueled by Knightly’s creativity and Attia’s digital and brand-building prowess.

Attia allowed that 2020 was a challenging year for the brand — France went into hard lockdown a week after she joined Moynat from Sephora — with the second half “above expectations.”

This year will see the brand open four boutiques — in Doha, Qatar, and in three Chinese cities, Nanjing, Wuhan and Shenzhen — adding to a network that already numbers 27 freestanding stores in the world. Attia plans to heighten the uniqueness of each new location with a bespoke product offer, limited editions and exclusive colors.

“To me, this is full of opportunities, and I really believe in in physical retail — when you come, you discover, you experience, you buy something that you will not find anywhere else in the world,” she said, also trumpeting its personalization services.

Moynat employs several full-time artists who meticulously handpaint initials, stripes or other customized motifs on leather or canvas bags. They employ an array of special colors, displayed in a row of jam-sized jars at the brand’s sun-drenched headquarters off the Rue du Mont-Thabor in central Paris. 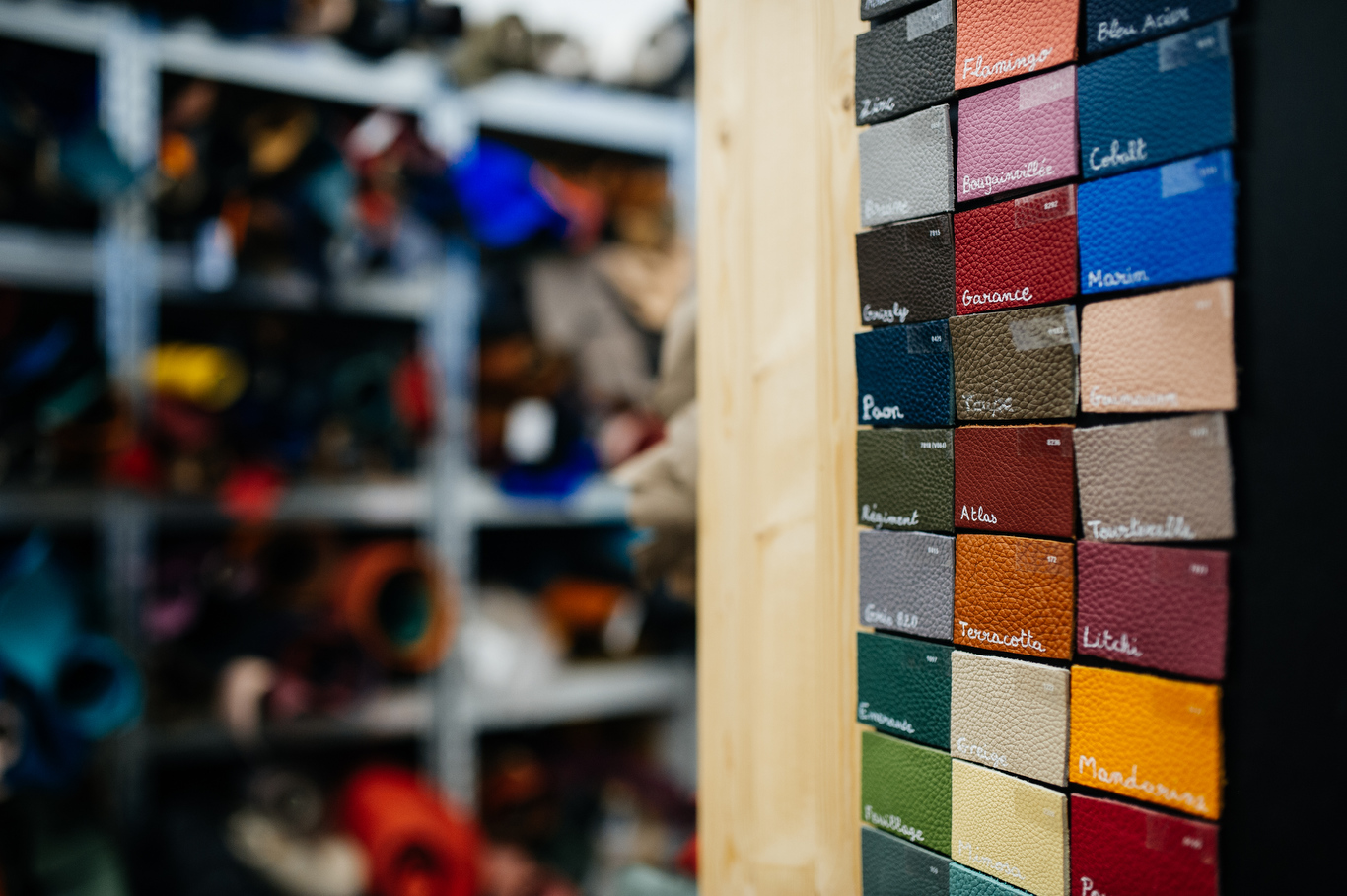 Knightly’s office is next door, and its most striking feature is a giant board of small leather samples in a staggering array of shades, many in the grained “taurillon” leather for which Moynat is known. He won’t introduce any black bags until later this year.

To date, most of Moynat’s customers hail from Asia, with French and Americans rounding out its top-three. However, during the pandemic, the brand was able to recruit more local customers everywhere in the world, Attia said, noting Parisians took to the “nano” version of its bestselling Réjane bag.

The new e-commerce site, slated to go live on March 19, is seen as a vehicle to reach new generations of customers, portraying the product as the hero and recounting the brand history.

“Digital is the tool to be connected with your community,” she said. “We want to use digital to unlock and to share all those untold stories of Moynat.”

Beyond that, Attia described a will to shed Moynat’s somewhat “institutional” image, reinforced by its ladylike top-handle bags, and emphasize more of a lifestyle attitude, in tune with today’s ideas about mobility. “It’s important that the woman feels free to live, free to move,” she said. 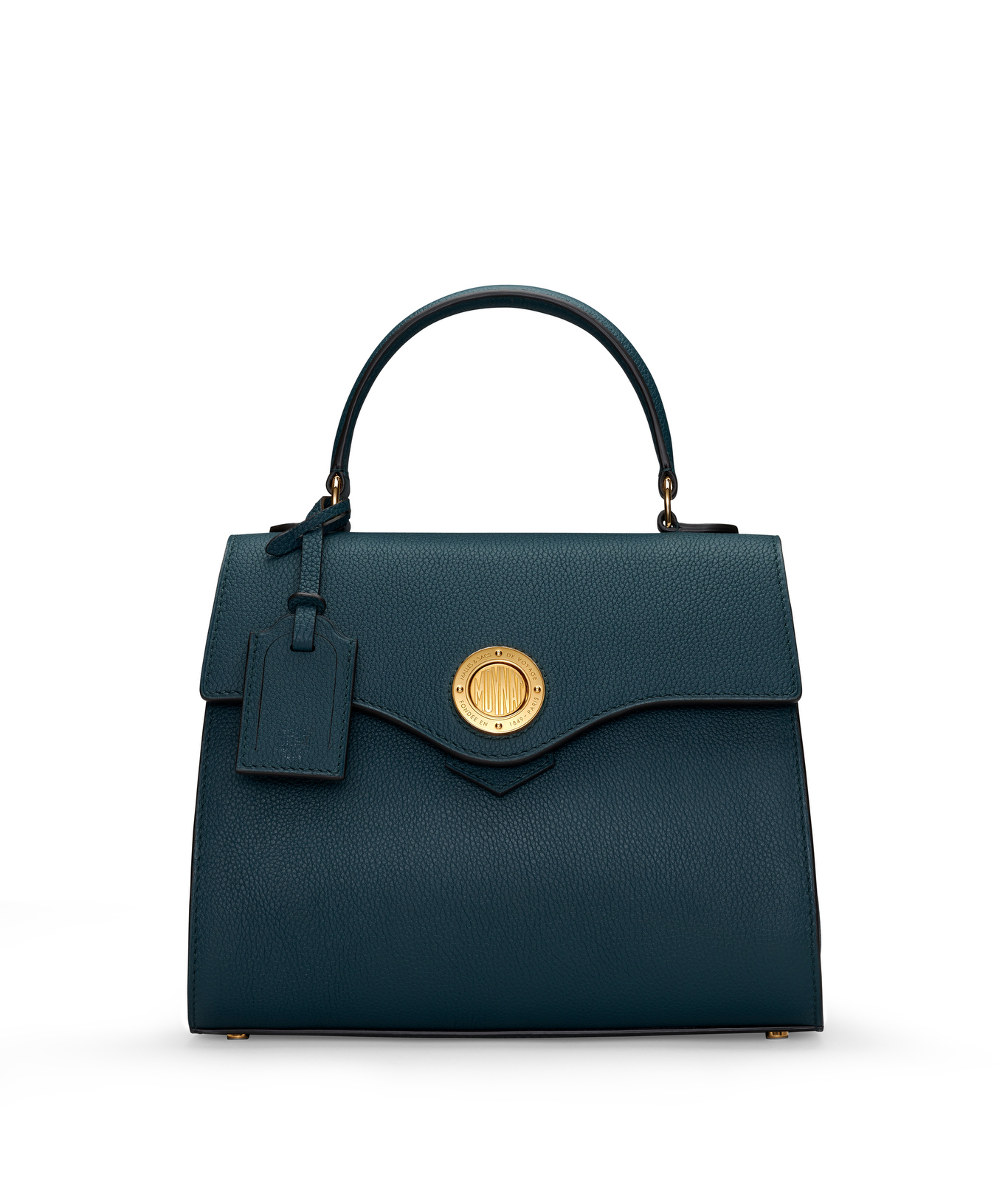 The “Voyage” bag by Moynat. Courtesy of Moynat

While Moynat has dabbled with men’s products over the years, Knightly and Attia plan to initially focus exclusively on female customers and its leather bags, canvas totes and a new category dubbed “trunks to go,” including a round one based on spare-tire carriers of yore. The unusual minaudière is called La Wheel.

“They’re not just a novelty, they’re actually just the brand adapting to modern times and needs,” Knightly said of the mini trunks, made with the same exacting, hand-wrought methods as large ones.

Noticing all vintage Moynat trunks contained envelopes inside for travel documents, Knightly incorporated small, matching zippered pouches into each of his handbags and trunks to go.

“Heritage is pretty much the greatest asset of the brand. It gives authenticity, and also kind of an authority,” he said in an interview, noting that the leather corners on some bags are stitched the same way as in the 19th century. “A lot of things today are mass produced. I think this inherited savoir-faire becomes more precious and stands out even more.”

Knightly said Moynat’s modest scale and artisanal approach allow more latitude to propose unusual and special colors, compared to larger brands “that are working in a much more marketing-driven way.” 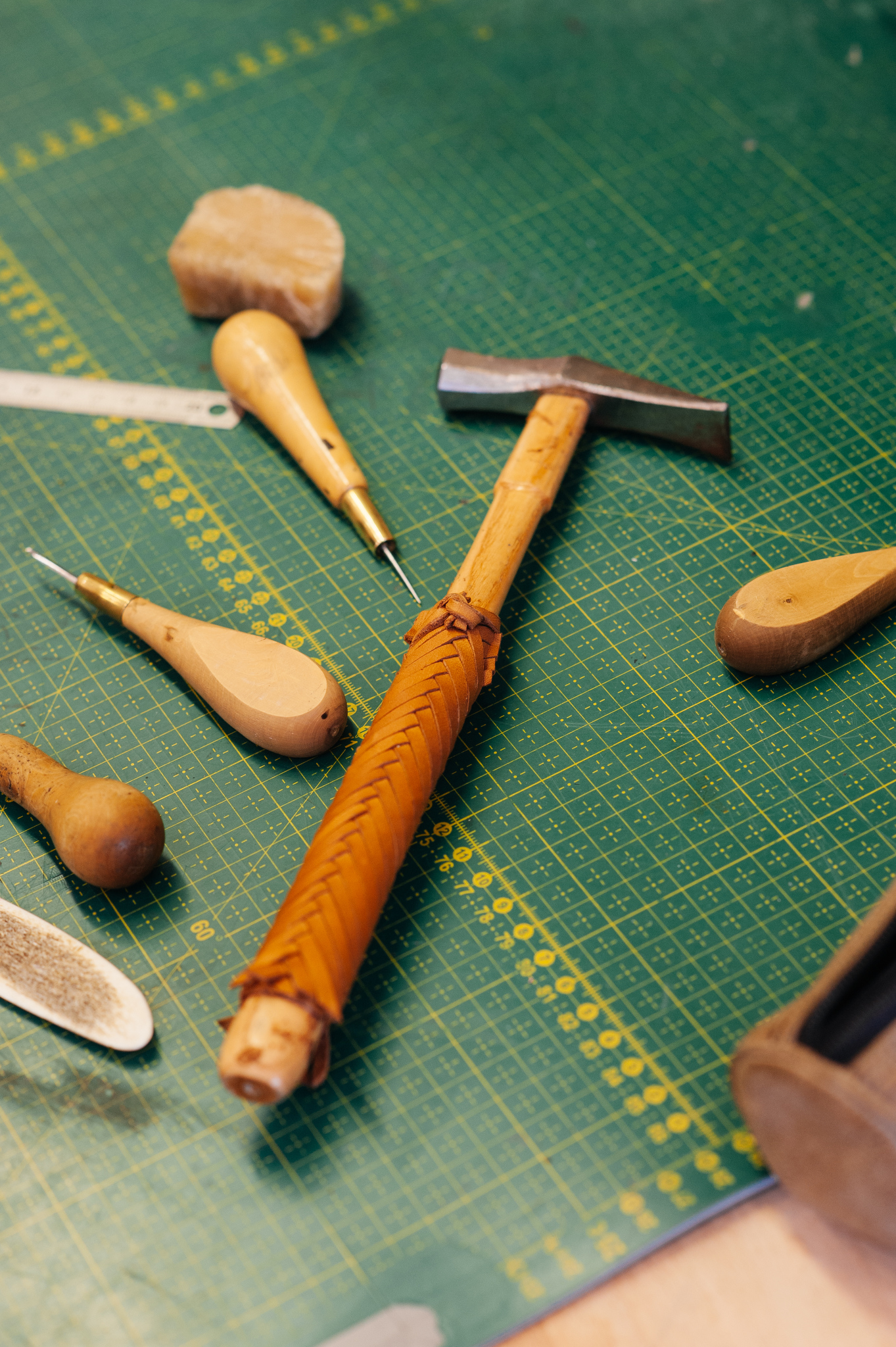 “At the top end, there’s definitely room for spontaneity and some surprises and what’s nice with a brand this size, you can speak to the smaller groups,” he said. “You can actually connect with customers that like the unusual colors and it’s much more individual, and special to them.”

Knightly’s first slate of handbags all incorporate a lock directly inspired by vintage Moynat trunks, including a medallion-shaped push style on Le Baluchon and Voyage models. “Honestly, they’re like little works of art some of them,” he enthused, noting that all locks were “reengineered so they work on soft bags.”

Even his crossbody bags like Le Flori — which give the brand a fresher, younger élan — can be found in the archive. Knightly marveled to see one featured in a Moynat ad circa 1903.

Moynat was one of the rare malletiers of the Belle Époque to be cofounded by a woman, Pauline Moynat, a merchant who teamed with the Coulembier family of artisans, and who was one of the first to set up a boutique at the foot of Avenue de l’Opera, the Champs-Élysées of its time.

Attia described Knightly as “very collaborative” in his approach, which is a big plus for a brand that puts such a premium on craftsmanship, and for one that still has something of a startup mentality. 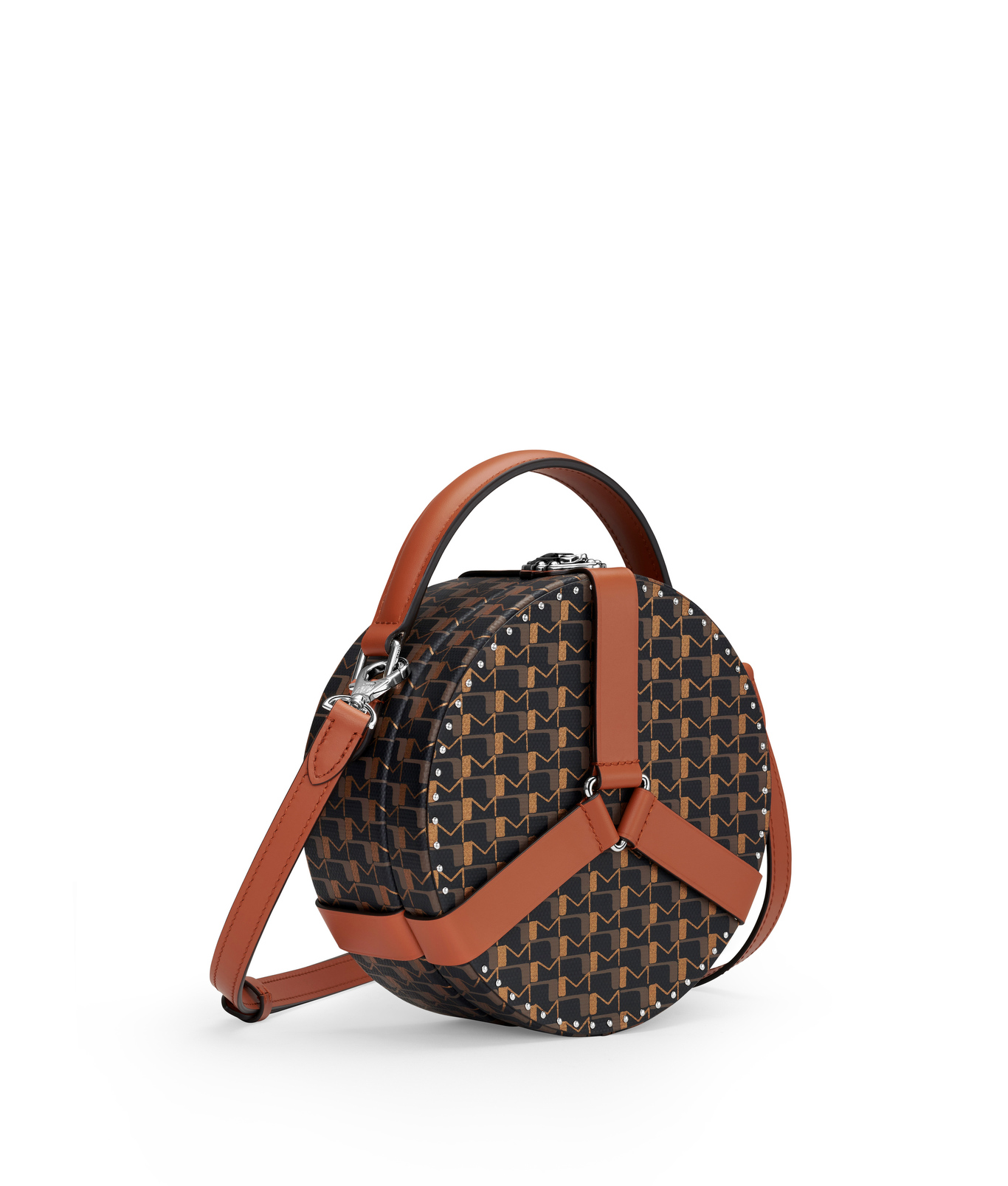 For example, when he submits a sketch to the Moynat workshops in Aubervilliers, on the northern fringes of Paris, artisans are given free rein to interpret and to propose enhancements.

“Suddenly, everyone feels part of the adventure,” she said. “This way of working, super collaborative, helped us a lot to propose new things, to push the boundaries, to dare.”

The new ad campaign, expected to break in April, was inspired by an architectural drawing of an early Moynat factory. Knightly said it resembled a doll’s house, and plunking a life-size bag inside makes it seem almost like it’s under a magnifying glass, the quality and details in plain view.

“These images explain our point of view and they give you a context, the spirit of the whole direction,” he said. “I really think it’s important to engage with your customers and inspire them, and celebrate what you’re doing.” 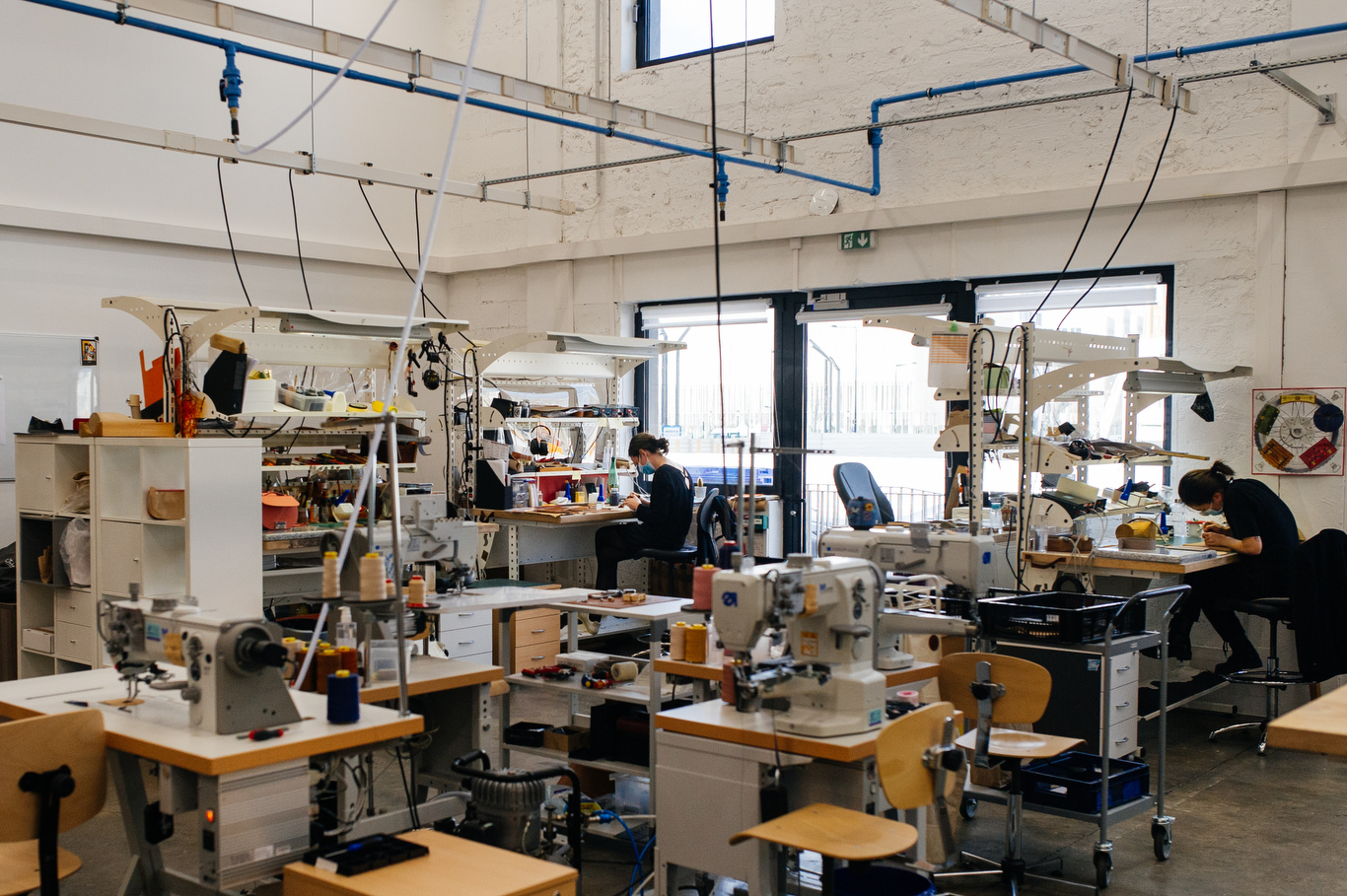 Knightly also noted that Moynat employs leathers that might be considered “uncommercial” at some other brands.

“This is also part of the magic of the brand, and a lot of the customers understand these different leathers. It’s a real pleasure for the staff to explain the different characteristics, the subtleties that give each bag a completely different personality,” he explained. “It’s a sort of celebration of quality and savoir-faire. Every single person in the brand just has such high standards.”

In tandem with its new thrust, Moynat hosting launch events in Beijing on Friday and in Shanghai on March 17, to be followed later by ones in Paris, Hong Kong, Taiwan and Seoul. The roving events reflect another “untold story” at Moynat: The “caravan” approach it employed more than a century ago, when it showcased its innovations at world’s fairs and auto shows.

How Louis Vuitton and Dior Are Crushing the Competition