Home » Fashion » Dad spends 45 hours getting huge tattoo in honour of his five lost babies, including a son who was just 27 days old 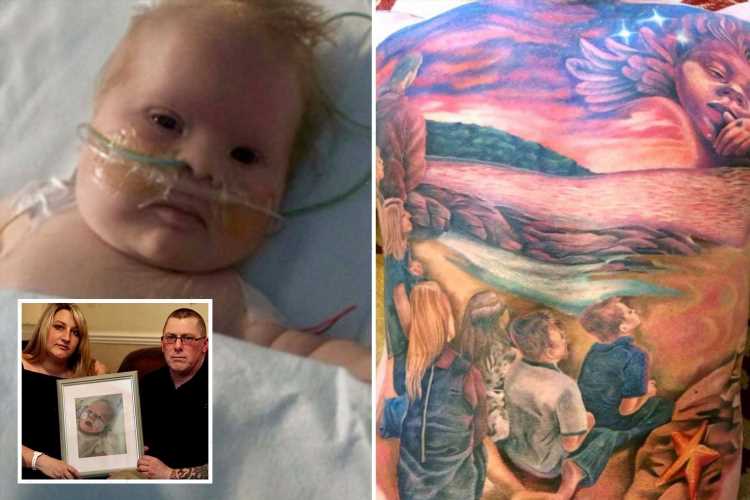 Dad spends 45 hours getting huge tattoo in honour of his five lost babies, including a son who was just 27 days old

A DEVOTED dad has covered his entire back with a giant tattoo in memory of his five lost babies – including his son William who lived for just 27 days.

David Bennett, 54, spent 45 hours getting inked, and the massive full-colour design shows his family looking up at William, with four babies he and his wife Kath lost to miscarriage, also portrayed as stars. 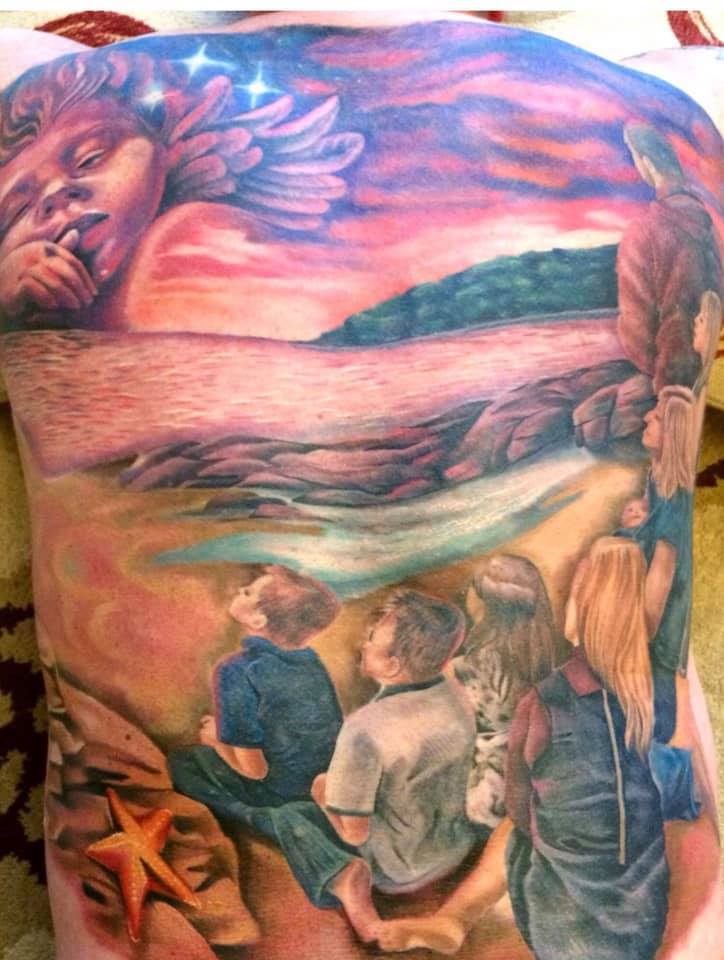 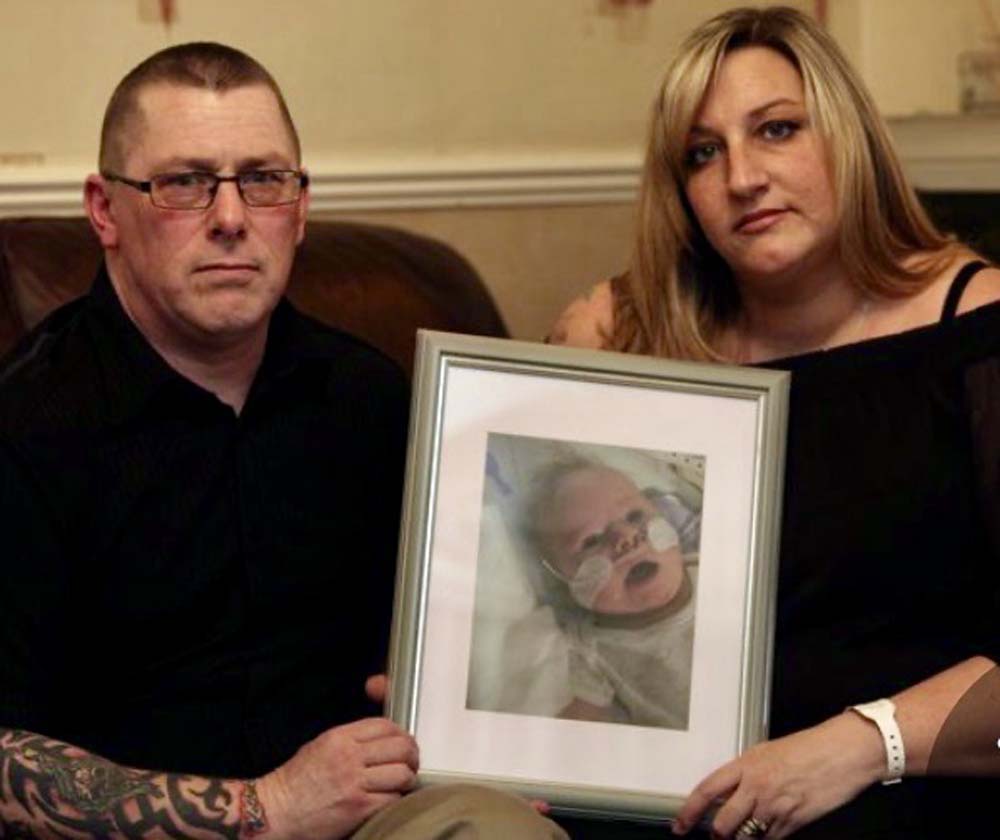 William, who had Down's syndrome, was born with bowel and heart complications and the family spent less than a month with him before he tragically died.

David – also known as Benny – helped tattoo artist Kayley Henderson design the picture, which is a beautiful tribute in memory of his lost children.

Fuel company delivery driver Benny and his wife Katherine, 43,have four other children together – who all appear in the tattoo. 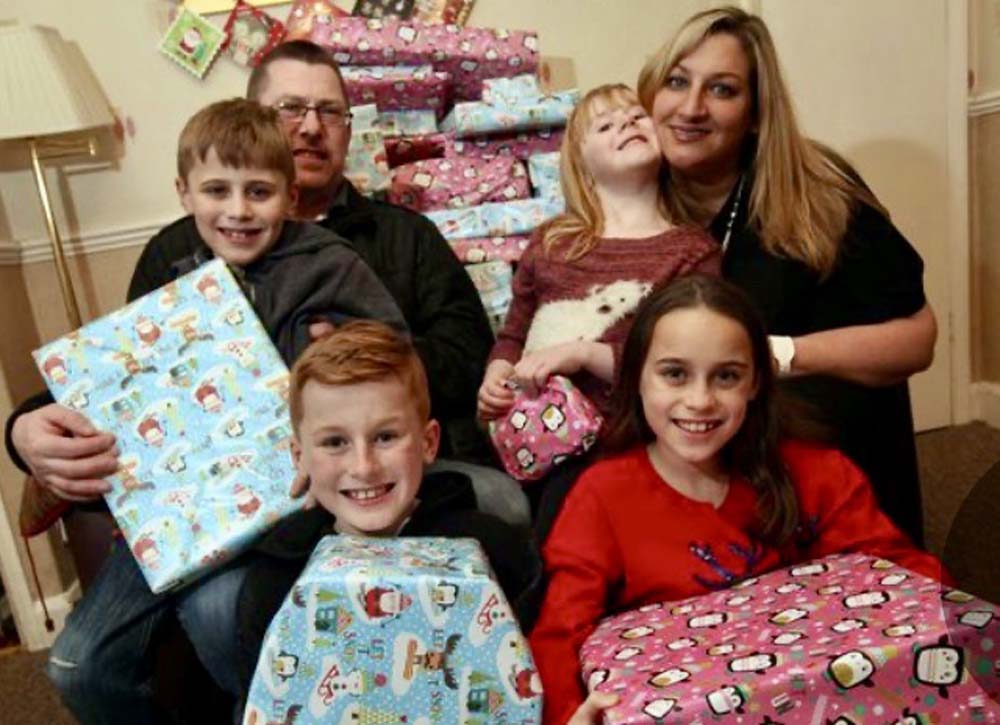 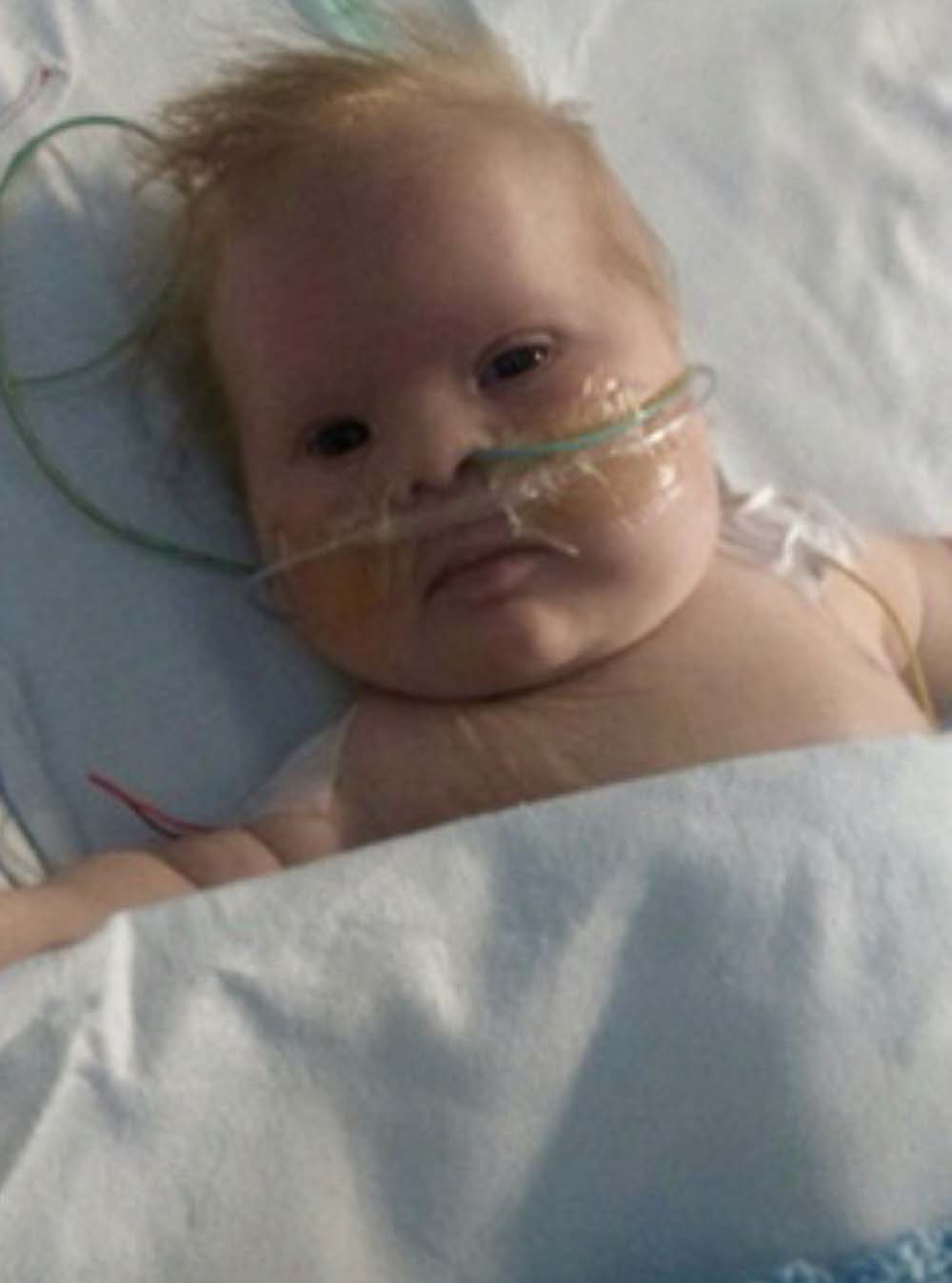 David also has two adult children, Kayleigh, 33, who was a travel agent and chef Daniel, 29, from his first marriage and then he had a vasectomy at 25 as he didn't want more children.

But when he met Katherine in 2003, he had it reversed, and they went on to start a family of their own.

And a more loving father you could not find, according to Katherine, who came up with the idea of the 50th birthday tattoo, because he was still finding it so hard to come to terms with all the loss – particularly, when it came to William.

She said: “He wanted something so he could feel close to William forever.

"We have a little memorial patch in our garden and a cherub statue, but he wanted something else. 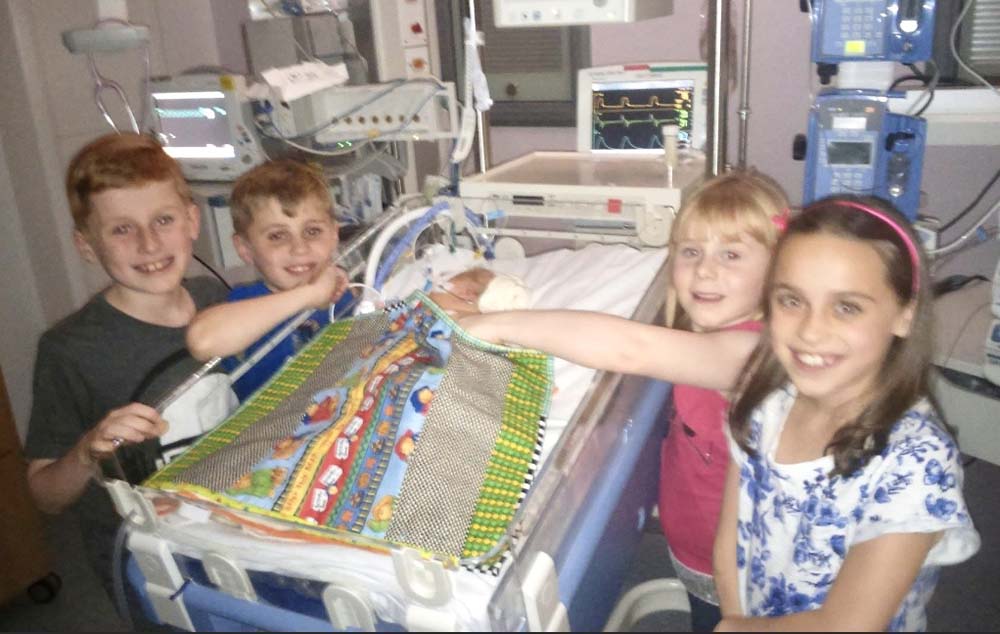 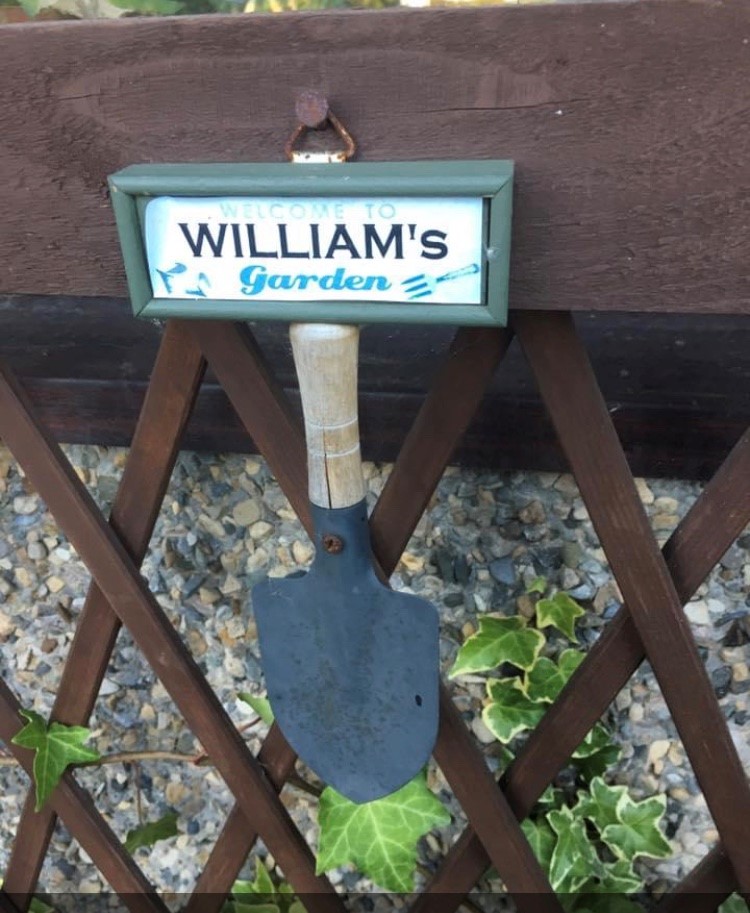 "We decided on the tattoo – but it took an awfully long time to complete, as we would run out of money and have to stop, save up, and then Kayley would carry on with it when we could afford some more.

“But she was very kind, because when she heard our story about our losses she agreed to do it for a reduced price of £2,600, when she normally charges £500 a day.  He had quite a lot of long sessions. It also has to heal between sittings so it took about six months to complete from start to finish."

Katherine, a full-time mum, who hit on the tattoo idea for Benny's 50th birthday, posted a picture of the inking on Facebook to mark World Down's Syndrome Day on March 21 this year, and the response was overwhelming.

Katherine, of Newcastle-upon-Tyne, Tyne and Wear, said: "People were saying it was stunning artwork. It was great to get nice feedback.

"William is buried nearby with my mum Mary Cowey, who passed away aged 45 from cancer in 1997. I just said straight away, 'I want William with my mum' – that's where he had to be. 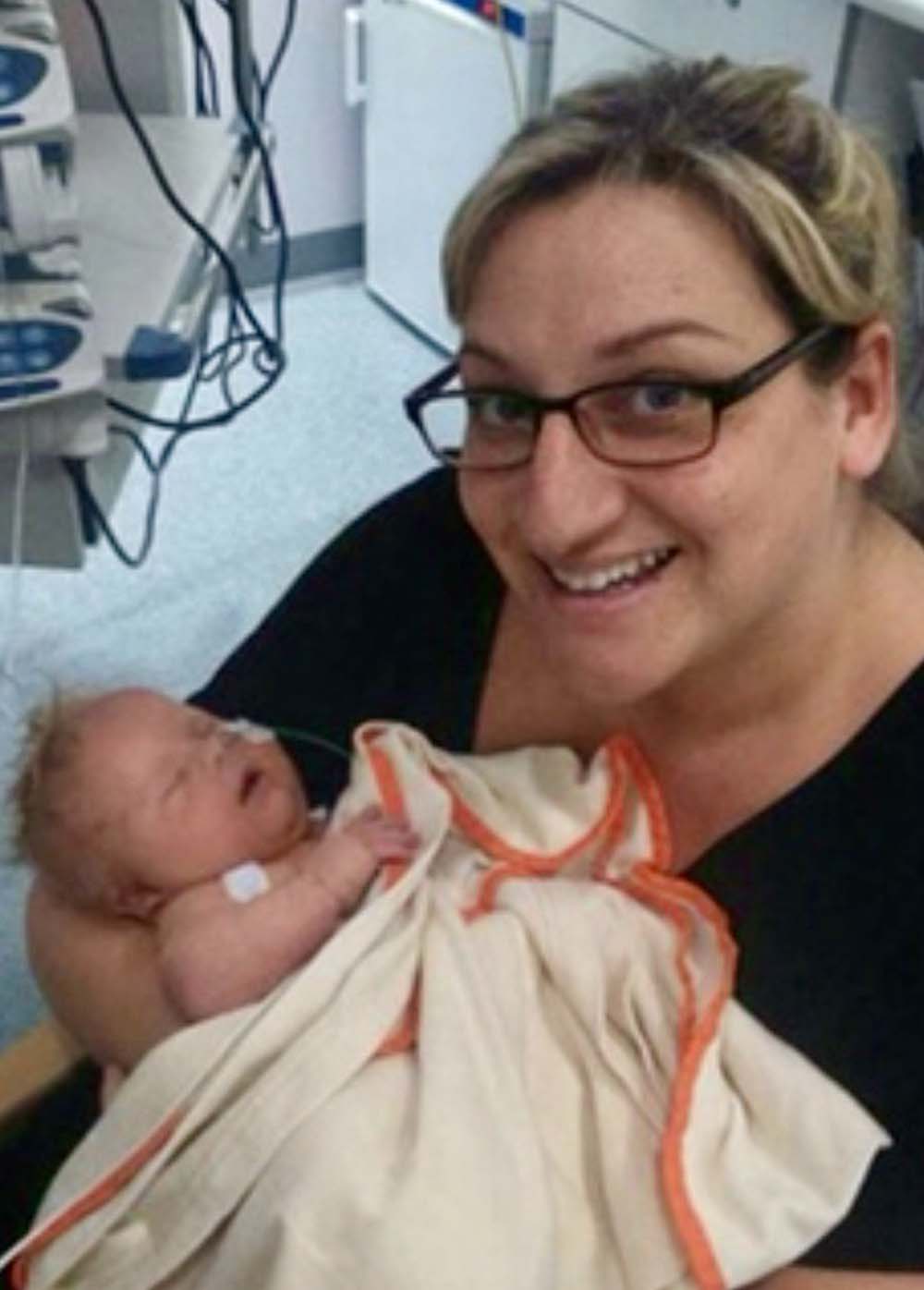 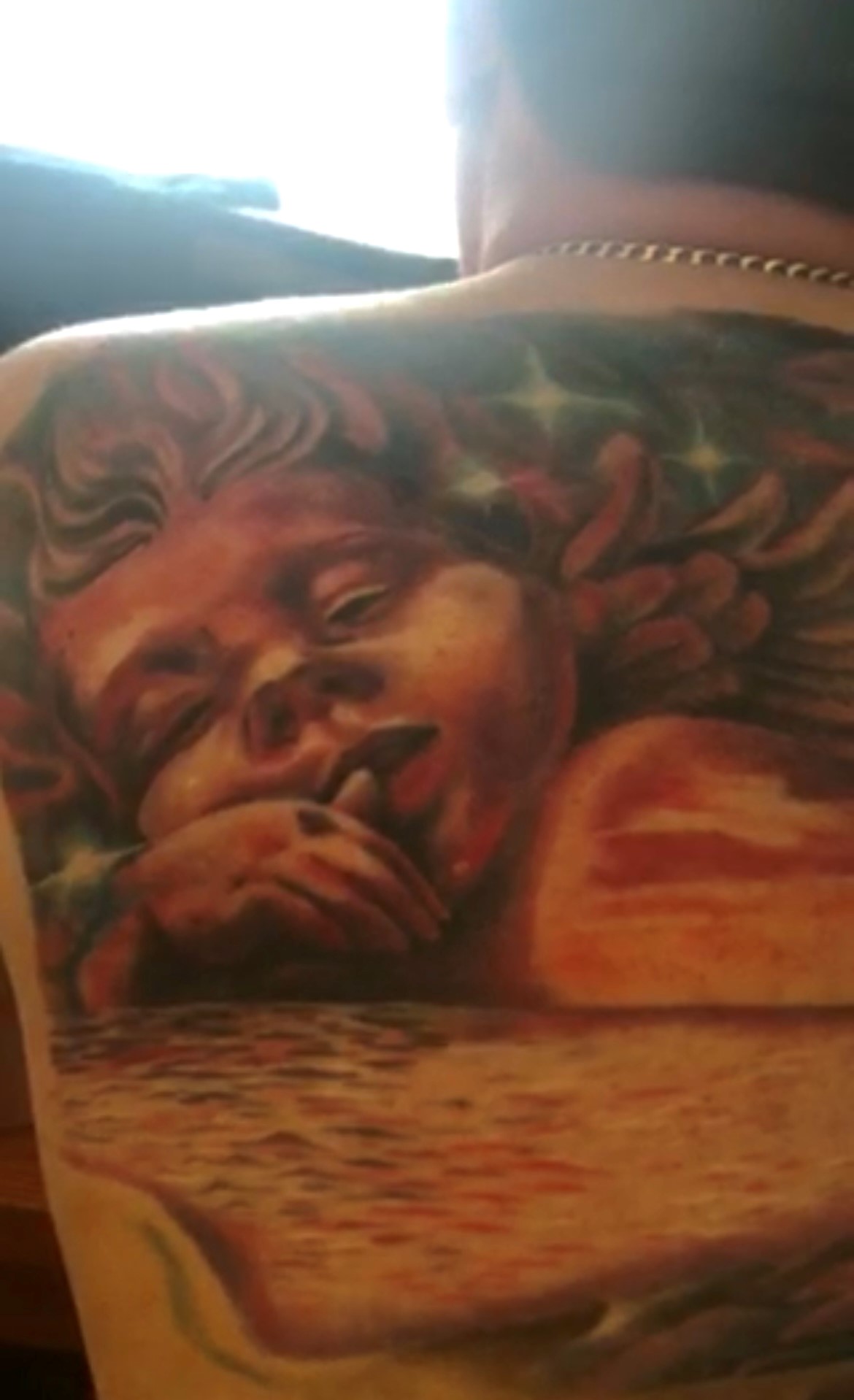 "We kept putting off engraving his name on the headstone. We will have to do it this year after the response to the tattoo and with Covid causing people so much heartache."

When William died on November 30, 2015, Katherine had already had four miscarriages – they are represented by stars in the tattoo.

It also shows her cradling “rainbow baby” Alexander – who was born after her losses.

David and Katherine's four older children are looking up at William as an angel in the sky at sunset, and Benny's two eldest children also appear in the image.

When William was born, the couple regarded him as their “miracle” baby after the miscarriages, which were for unknown reasons.

But he was suffering from a “double bubble,” where his bowel was not joining his stomach, as well as having a hole in his heart. 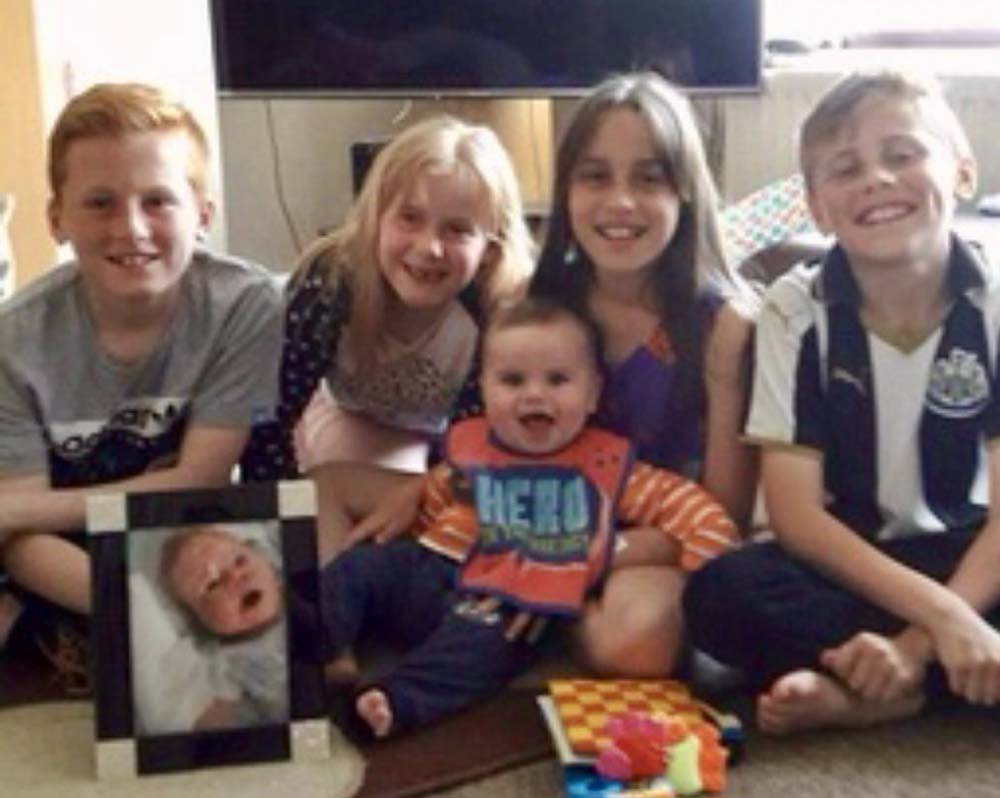 Katherine said: “I was already 35 weeks pregnant when a routine scan first picked up the double bubble, but even then no one mentioned Down’s Syndrome.

“I googled it and saw the two things often came together, so then I had a test and the Down’s was confirmed.

“The doctors offered to terminate the pregnancy and said I was allowed that up until labour. I was obviously devastated and cried for days, as I didn’t know anything about Down’s syndrome.

“But then people with children with Down's started contacting me and when I met one of them,  I realised it didn’t matter.  I wanted to have William and it wouldn’t make any difference to how much I loved him and cared for him.”

Despite being induced a week early at 40 weeks, he was Katherine’s biggest baby, weighing 9lb 8oz. 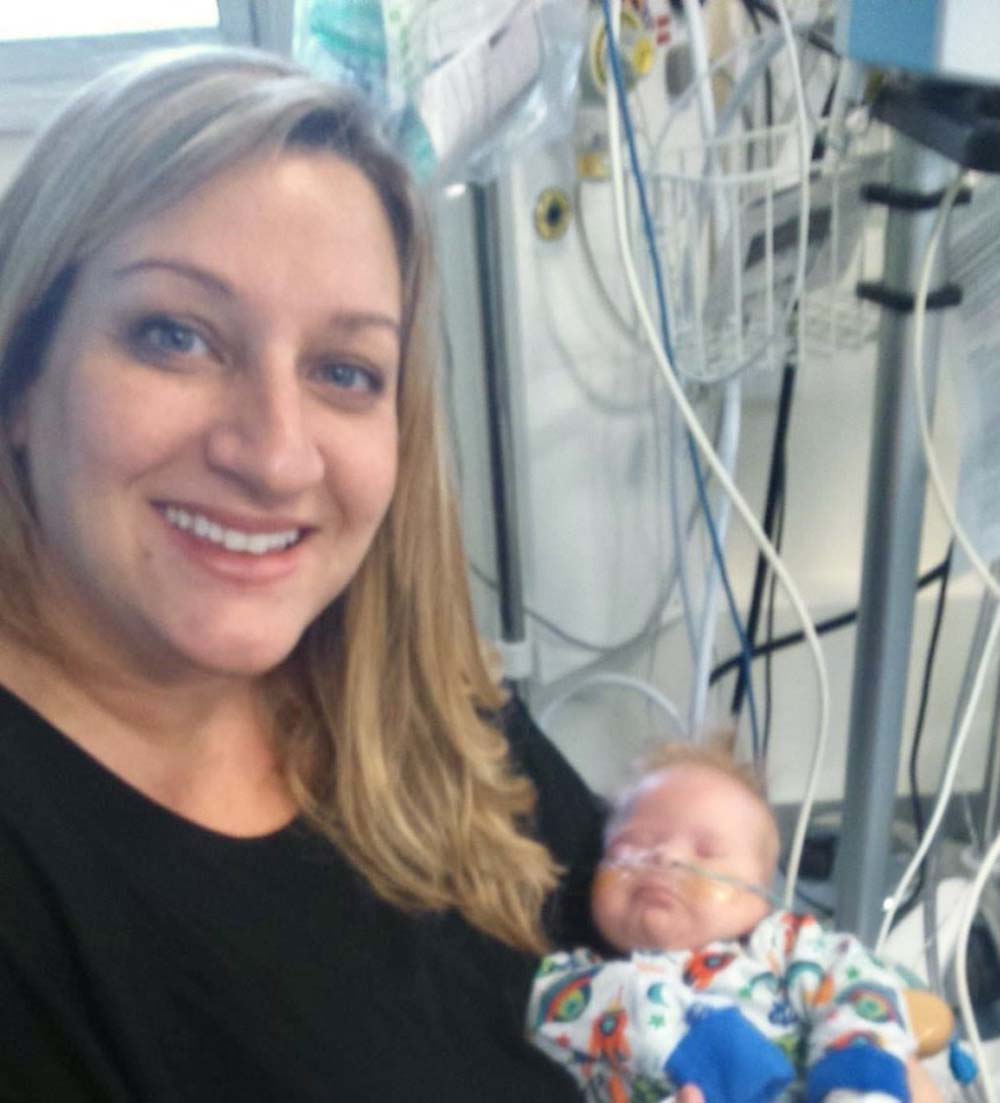 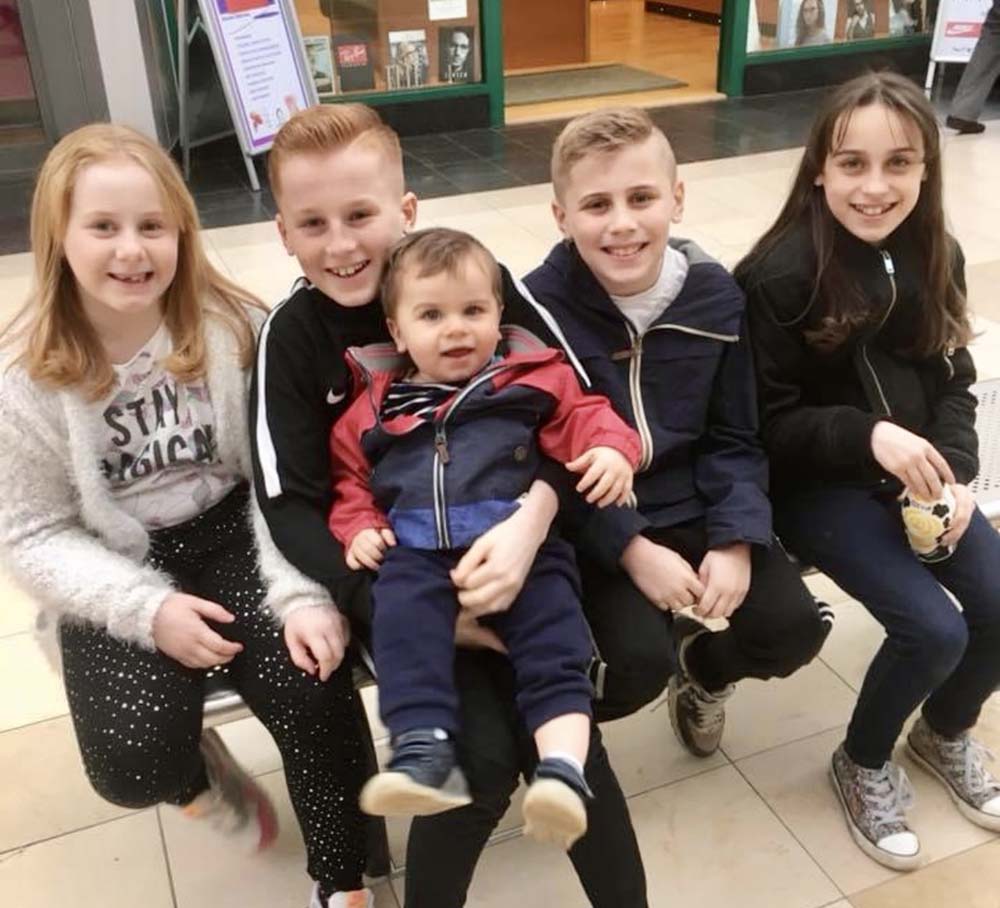 But at one day old, William had to have surgery on his bowel. Then four days later, when a problem developed with a heart valve, he had an emergency heart operation.

Soon after, William needed more surgery on the hole in his heart, but he passed away just three days before his operation was due, when his organs shut down – leaving his poor parents to register his birth and his death on the same day.

Despite going on to have so many children together, at first Katherine and Benny could not fall pregnant.

She said: “To our delight, after 18 months of trying, and six weeks after we got married, I got pregnant with twins Josh and Steph, who we had in 2006.  Then we had Cameron after that and Hannah in 2009.

Even though I hadn’t wanted more than four children, with each miscarriage, I became more determined to have another healthy baby.

“I didn’t get pregnant again, even though we weren’t using contraceptive, but we knew there had been a complication when Benny had his vasectomy reversed, so we thought that was it.

“Then I suddenly fell pregnant out of the blue by accident, which led to my first miscarriage at 18 weeks.  Then I lost twins at 13 and 15 weeks, and a fourth baby at 12 weeks. All of them had appeared healthy at the 12 week scans.

“Even though I hadn’t wanted more than four children, with each miscarriage, I became more determined to have another healthy baby.

“Then William came along seven years after my fourth child, Hannah.”

Overcome with grief after William passed, the couple vowed to try for one more child and were blessed 13 months later with Alexander in December 2016.

Katherine said: “Now we are one big happy family together. 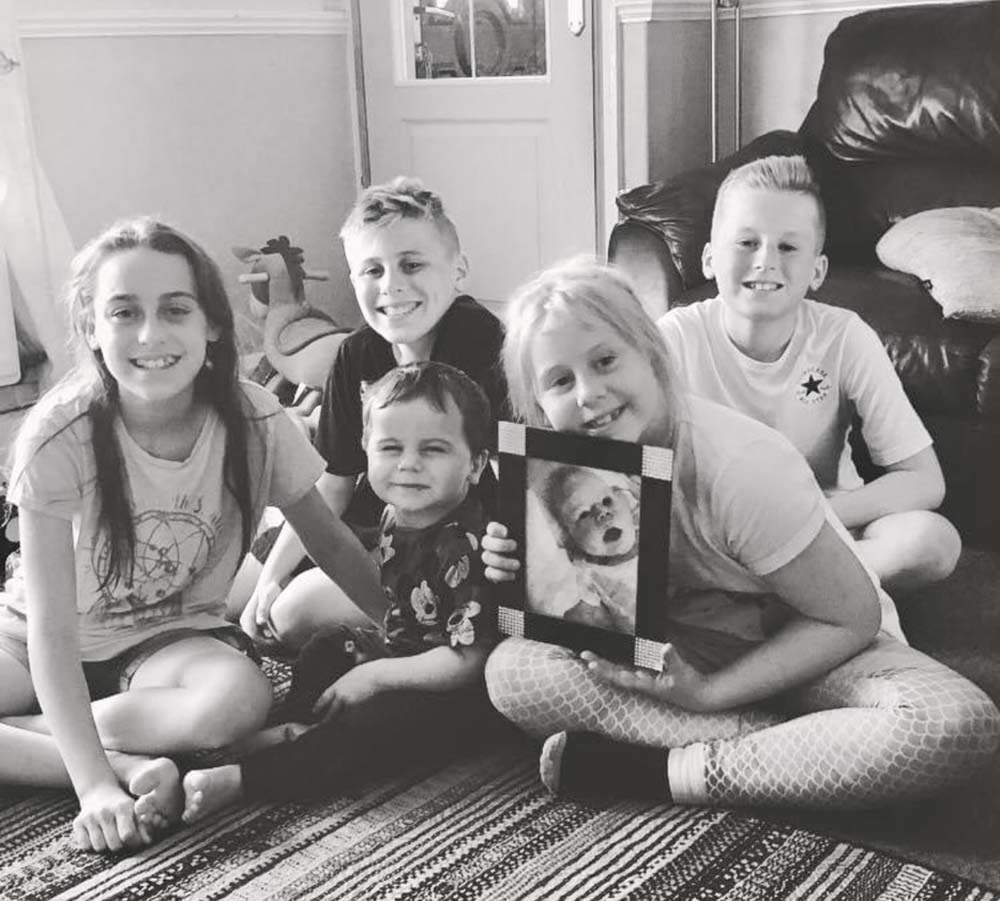 "We go on holidays with Benny’s eldest daughter, Kayleigh and her children, who are 13 and 13 months. We were even pregnant at the same time.

"But William is forever in our minds.

“We have a patch in our garden dedicated to him with a cherub statue and a plaque that says ‘William’s Garden’.

“He is also buried with my mum with another cherub, but we are now planning to have the headstone engraved with a special message for him.

“Benny's tattoo sums up our family and we love it, but because of the British weather hardly anyone gets to see it as he doesn’t get his shirt off.

“I get more comments for my tattoo of just a fairy, mushrooms and butterfly, which goes from my arm to my back. 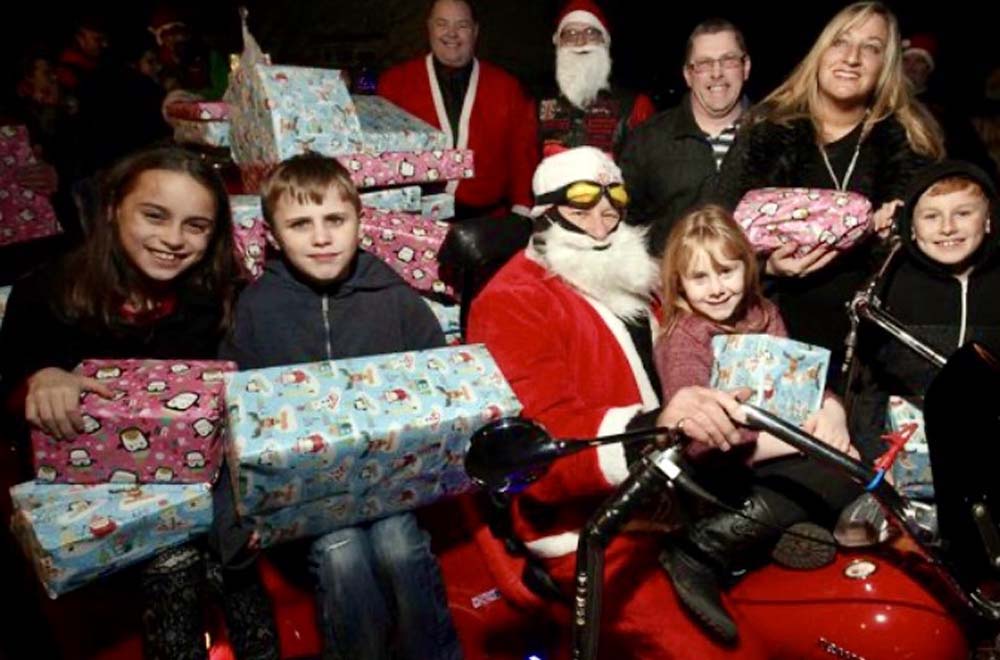 "But when Benny does show it occasionally, people just go, ‘Wow’.”

Meanwhile, Benny will never forget the son he loved and lost and will forever cherish the tattoo he has as a permanent reminder.

He said: “People have been so kind to us. One Christmas we had 16 motorbikes turn up with the bikers dressed as Santas, bringing dozens of presents for our four children, because they heard what had happened with William after one of my family's friends told his mates in the Easy Riders North-East group.

“I would cry alone after losing him and I wondered what he would be like.

"But now I hope he is looking at my back now and thinking, ‘Daddy did that for me.'"

WHAT’S IN THE BOX?

Last year’s box sold out in less than 48 hours, so what are you waiting for?

Meanwhile, this gran has spent £25k covering her body in tattoos in five years, she said it’s her life savings & she love showing them off.

Plus  this woman spent four days cuddling her dead baby – she brushed her hair, dressed her and read her stories.

For more real life stories, one mum opens up about being left with a gaping hole in her stomach after opting for a cut-price tummy tuck after giving birth.