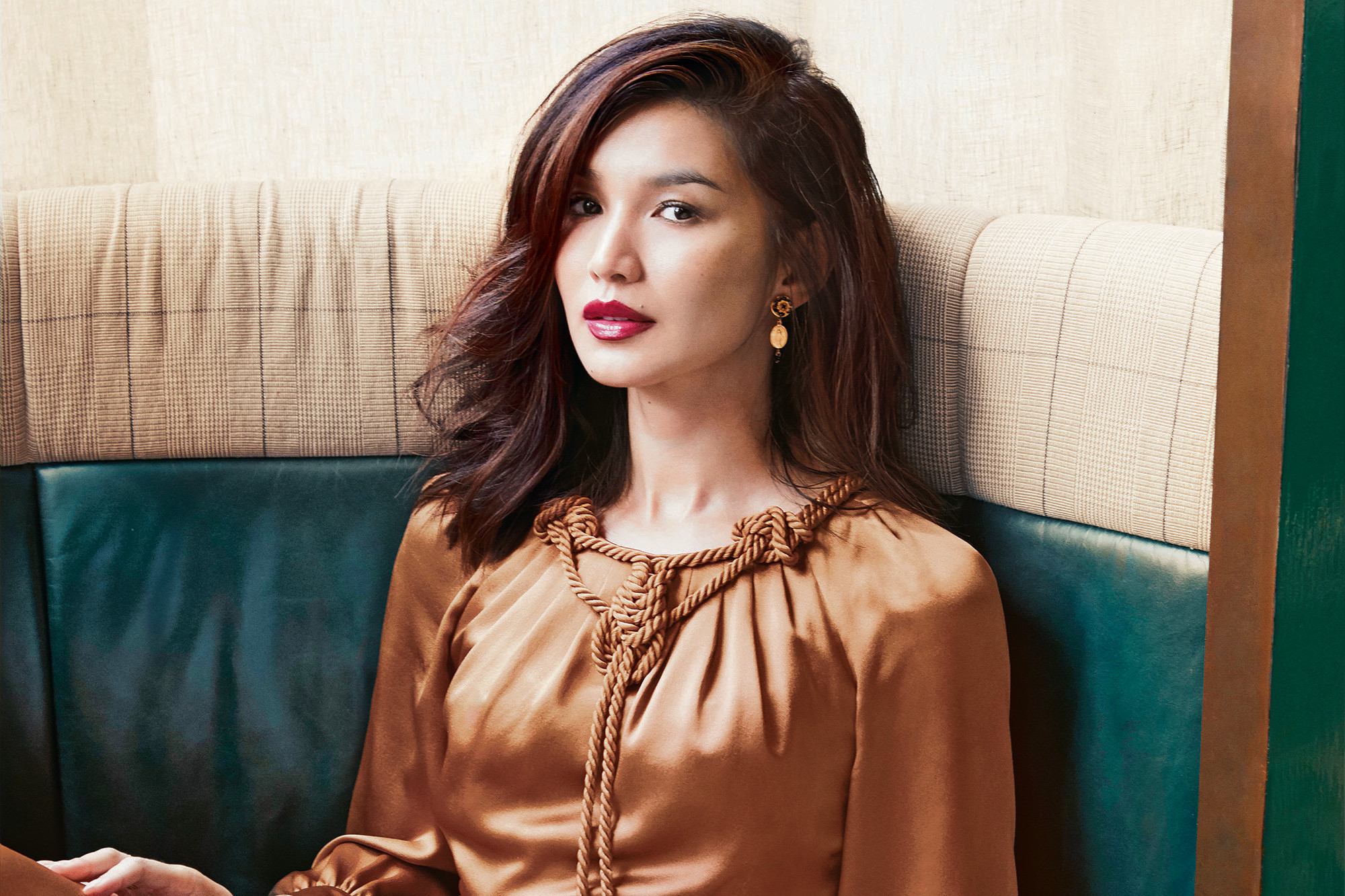 What a difference four months makes.

Up till mid-August, Gemma Chan was an oft-working British actress, not yet an A-list celeb or boldface name. Crazy beautiful, she’d done a modeling stint; crazy brainy, she graduated from Oxford with a law degree in 2004. Then the overachiever skipped off to study performance at London’s renowned Drama Centre and very briskly started working on the British stage and in television, playing everything from a feisty girlfriend in playwright David Henry Hwang’s acclaimed “Yellow Face” to a sexy synth on the sci-fi series “Humans.” She also scored a series of small roles in big movies like “Jack Ryan: Shadow Recruit” and “Fantastic Beasts and Where to Find Them.” And her six-year-long, live-in relationship — and 2017 breakup — with handsome co-star Jack Whitehall (of BBC’s campus comedy “Fresh Meat”) made news in the UK.

But what a difference an international blockbuster makes. Chan stunned as wealthy-but-heartbroken cousin Astrid in the groundbreaking “Crazy Rich Asians” — Hollywood’s first film in 25 years to feature an all-Asian cast — which has racked up more than $238 million worldwide and countless great reviews. Thanks to her poignant portrayal of the ultraglamorous heiress, the 36-year-old artist has now emerged as a potential marquee star, action star, fashion star and likely star of CRA’s swiftly green-lighted sequel.

Not that the modest British-Chinese rose is letting the hoopla go to her head. “I wouldn’t say I have my pick of things,” Chan tells Alexa. “People are more aware of me, but I’m just continuing to do what I did before — reading scripts, waiting for the right thing. I’m not sure what next year will hold, but I hope it’s diverse.”

It’s certainly looking that way. Chan will appear in a slew of high-profile projects, including the costume drama “Mary Queen of Scots,” opening Dec. 7, and the superhero flick “Captain Marvel,” out March 8, 2019. She also appears to be crazy in love with Dominic Cooper, her equally alluring British co-star of 2017’s action thriller “Stratton.” The new twosome were snapped vacationing on the Spanish island of Formentera last summer, then moving things into his London apartment.

Chan giggles at his name, but that’s it. “Um, on the whole, it’s something I don’t talk about in interviews — for my own sanity. Though I’m aware it comes with the territory. Believe it or not, it’s very normal and boring.”

Normal, perhaps. Boring — not. However, her newish paramour’s only a side note to what’s a verge-of-exploding career.

“You know, I don’t feel that different,” Chan proclaims of her post-CRA uptick. “But other people are treating me differently. The response was beyond what any of us would have hoped. I’m glad the door’s been kicked open for more Asian stories — I hope it’s not a passing trend.”

And it won’t be, if this go-getter has her way. Her father, an engineer from Hong Kong, and mother, a Chinese-Scottish pharmacist, taught their two daughters a formidable work ethic. Not only was Chan a nationally ranked swimmer by her teens, but the gifted musician considered a career as a violinist. Even so, when it came time for university, her parents pushed for a practical, highly paid career.

“They encouraged law school. It’s not that unusual in our world. On ‘Crazy Rich Asians,’ three of us actors had studied law.”

Although her folks were disappointed when their eldest chose showbiz, today they are proud of her success. After all, CRA had only been in theaters for one week when Warner Bros. asked the creative team to move forward with the adaptation of “China Rich Girlfriend,” Kevin Kwan’s second book in the hit trilogy. Luckily for Chan, this one also moves Astrid front and center. “The character has great potential,” she says. “They can go into Kevin’s depiction of her past — her year in Paris, how she met her husband — she had only a short cameo in the first film.”

Which means Chan’s billing will be higher, particularly after her next big-screen releases. In “Mary,” she plays Bess of Hardwick, a real-life 16th-century aristocrat and trusted confidante of Queen Elizabeth (Margot Robbie) who was tasked with “hosting” Mary (Saoirse Ronan) in prison for more than 15 years. “Bess was a powerful figure in a man’s world,” Chan notes. “She outlived four husbands. She was the second-richest woman in England. She built beautiful homes in Derbyshire, which we actually shot in.”

Hmmm … the second wildly wealthy woman she’s played — in a row? “I know!” she says with a laugh. “Sadly, not a reflection of Gemma the actress. At least not at the moment. I don’t know why I get cast that way. I did get to wear gorgeous clothes in both. But Bess’ corseted gowns were not the most comfortable. When you wear it day in and day out, it’s excruciating. We women all suffered: The boning digs into your ribs. We couldn’t sit down; after scenes, we’d lean against the wall. You can’t run or take proper full breaths! But it does give you the posture of the time.”

The futuristic armor she wore to play brilliant Kree scientist Minn-Erva in “Captain Marvel” was equally constrictive.  “I went from one uncomfortable costume to another! It looked like a one-piece, easy to put on, but it was designed with many, many parts: a major production to put on and go to the bathroom in. We had to schedule bathroom breaks! You go with a fitter, together. It took about half an hour to get in and out of. And you can’t hold up filming. For a while, I stopped drinking liquids. But then I got dehydrated, got headaches, so that’s no good either.”

On her worldwide press tour for CRA, Chan’s dazzling outfits by Jason Wu, Prabal Gurung, Simone Rocha, Altuzarra, Oscar de la Renta and others instantly transformed her into a fashion icon in the British press.

“I don’t know about that,” she demurs. “But the looks I wore did get a lot of coverage. I really enjoyed putting them together with my stylist Rebecca Corbin-Murray. We put an emphasis on Asian creativity.”

“I worked with him five years ago. He lets the actors flesh out the characters. It’s wonderful and equally terrifying. You don’t have a safety net. He says, ‘Bring your own s- -t — your emotional history.’ It’s physically and emotionally demanding; you can’t have anything false in it. You can get really amazing raw results, brutally emotionally truthful. But it’s so revealing.”

And she finally scored her first starring movie role in “Intrigo: Dear Agnes,” due out in 2019. She plays a woman who sets up the murder of her husband in the adaption of a Swedish crime novel directed by Daniel Alfredson, who made two of the original “Dragon Tattoo” films.

More than anything, Chan wants to stretch professionally. “I love comedy, I love drama and everything in between. I like to jump genres. I’d love to get back onstage. I shot a Jane Austen-style pilot with Freida Pinto; I’d love to do that [if it gets picked up]. I love the variation.”

Arts writer, 33, was found frozen to death in ditch