Haute Couture Week was full of newness: Kerby-Jean Raymond became the first Black designer to show on the official calendar and Demna Gvasalia presented the first couture collection at one of the original couture houses, Balenciaga, in 53 years. But it was also a return to the status quo in many other ways. The fashion set reunited in Paris for the first time in over a year to watch models in the latest exquisite hand-made offerings at Chanel, Armani Privé, Dior, and more IRL. There were seated dinners, street style, and front rows.

One label that is committed to keeping it fresh in one very particular way is Jean Paul Gaultier. Following the announcement of his retirement after 50 years in fashion in a rather cryptic Instagram post in January 2020, Gaultier revealed that his label would live on via seasonal collaborations. First up is a revelatory partnership with Sacai’s Chitose Abe, who applied her signature splicing approach to many of Gaultier’s signatures. 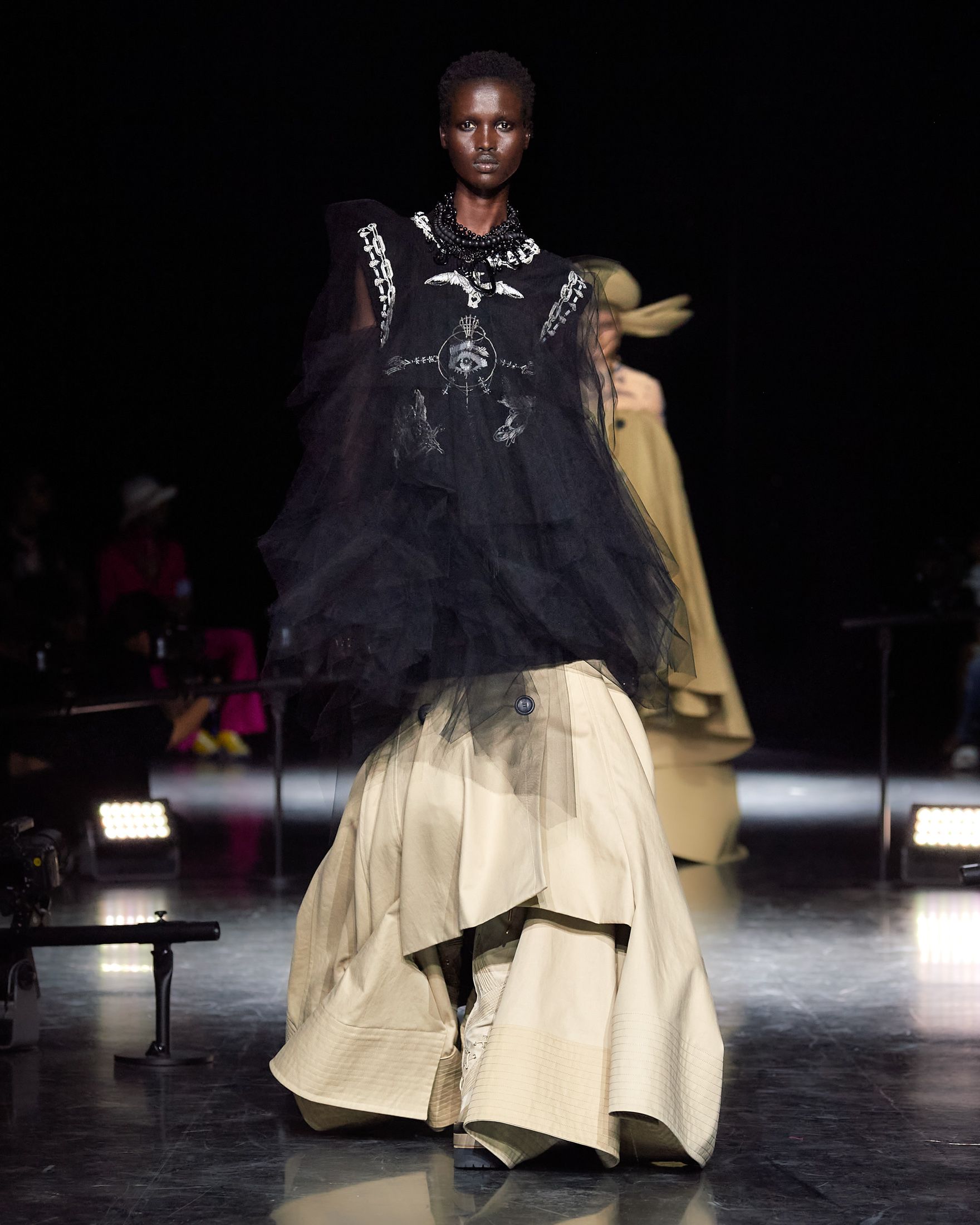 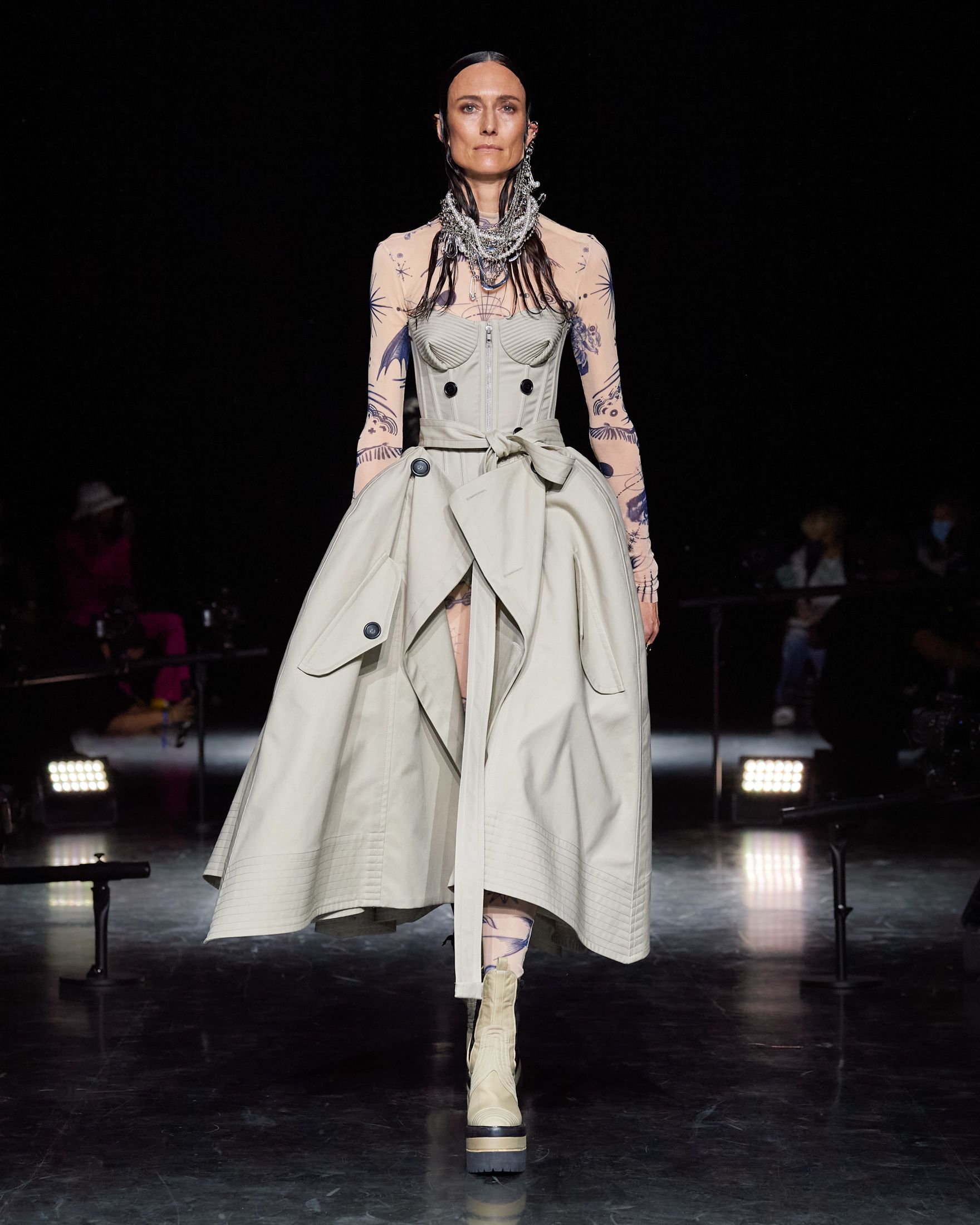 All of the hallmarks of a good relationship were already there: a mutual love of tartan and stripes, uniform dressing, suiting, and a modern approach to genderless style. The meeting of these two minds came about naturally “I was truly surprised,” Abe tells BAZAAR.com exclusively of the partnership, “I was invited for tea by Jean Paul, and the meeting was so personal and intimate. The conversation felt genuine and organic.”

“I knew from the beginning that I wanted to refer to Jean Paul’s archives,” Abe explains of her approach to designing the collection, “I already knew in my mind which looks even before I actually saw the archival pieces.” Presumably, Gautlier’s iconic 1984 cone bra, popularized by Madonna, was high on the list. It emerged on a corset, paired with a deconstructed navy pinstripe skirt suit, on a strapless tan cinch-waist trench dress, and on another corset layered over a puff coat, all in navy pinstripes.

A famous image of a bride and groom in coordinating fisherman sweater looks from a 1998 Gautlier couture collection may have also been on that list. A series of ivory knit looks were standouts, as were nods to those nautical uniforms both Gaultier and Abe have each referenced so expertly individually in the past. And you guessed it, tartans and light blue French Riviera stripes also made eye-catching appearances, often paired together. “One thing that Jean Paul said was, ‘designing needs to be free,’” Abe remarks, “So he really gave me total freedom to design this collection.” And it showed. 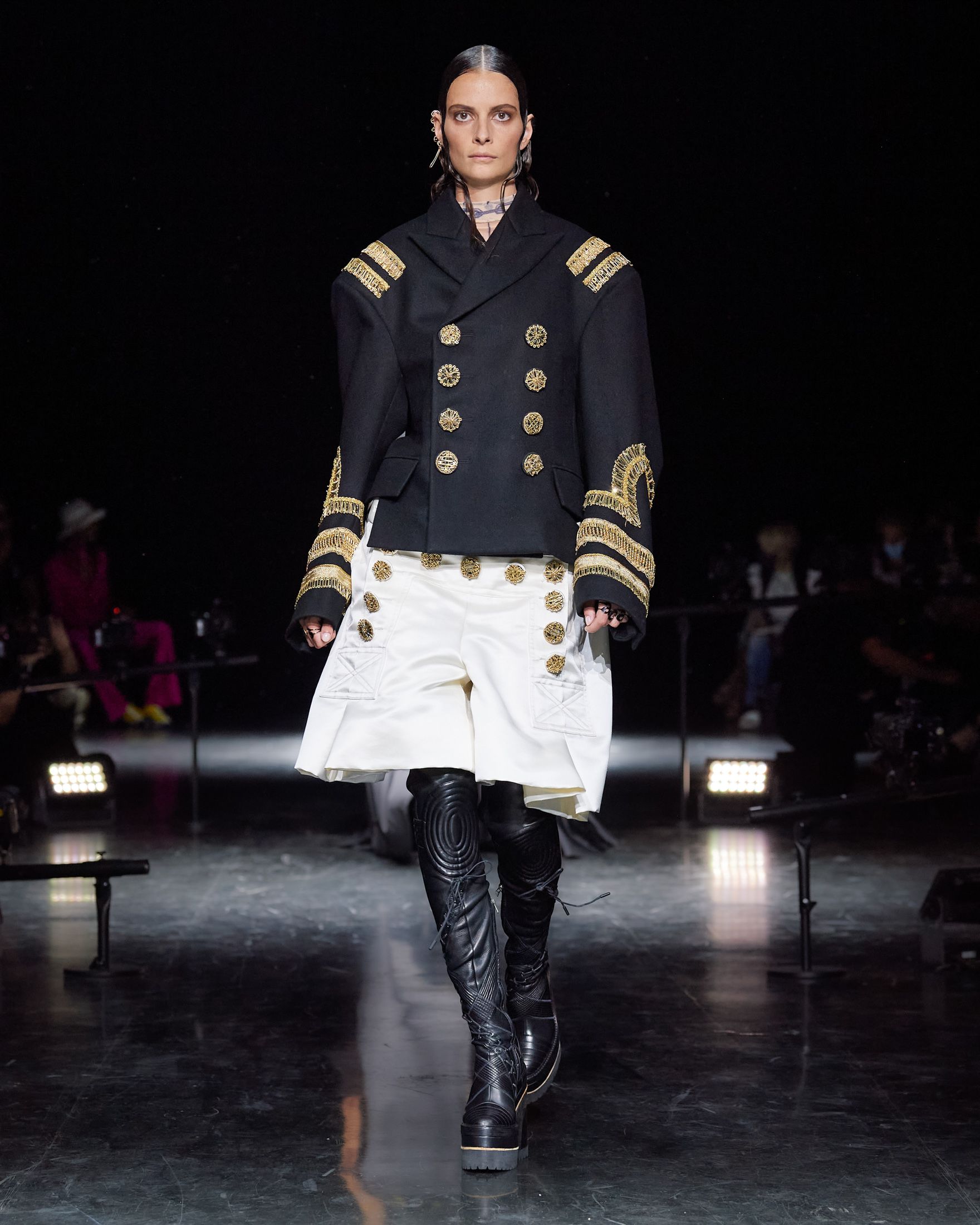 Abe’s first foray into couture was a well-executed one, a true meeting of two fashion minds, but not an entirely new experience for the Japanese designer. “For a ready-to-wear brand, Sacai is also made with some complexity, and we also only produce what has been ordered, so in some ways working on couture did not feel all that unfamiliar,” she says, “However, there were techniques and detailing such as hand-embroidery and usage of certain embellishments which one cannot achieve for ready-to-wear.”

That’s where true partnership comes in. And Abe and Gaultier’s wasn’t the only one on display. Tattoo prints by Dr. Woo and a shoe collab with Pierre Hardy, whose thigh high faux fur-trimmed boots harken back to Gaultier’s Fall 1994 Mongolian collection, also made appearances. The 32-look collection culminated in a walk down the runway (not elevated this time around as Gaultier was wont to do) by both Abe and Gaultier. 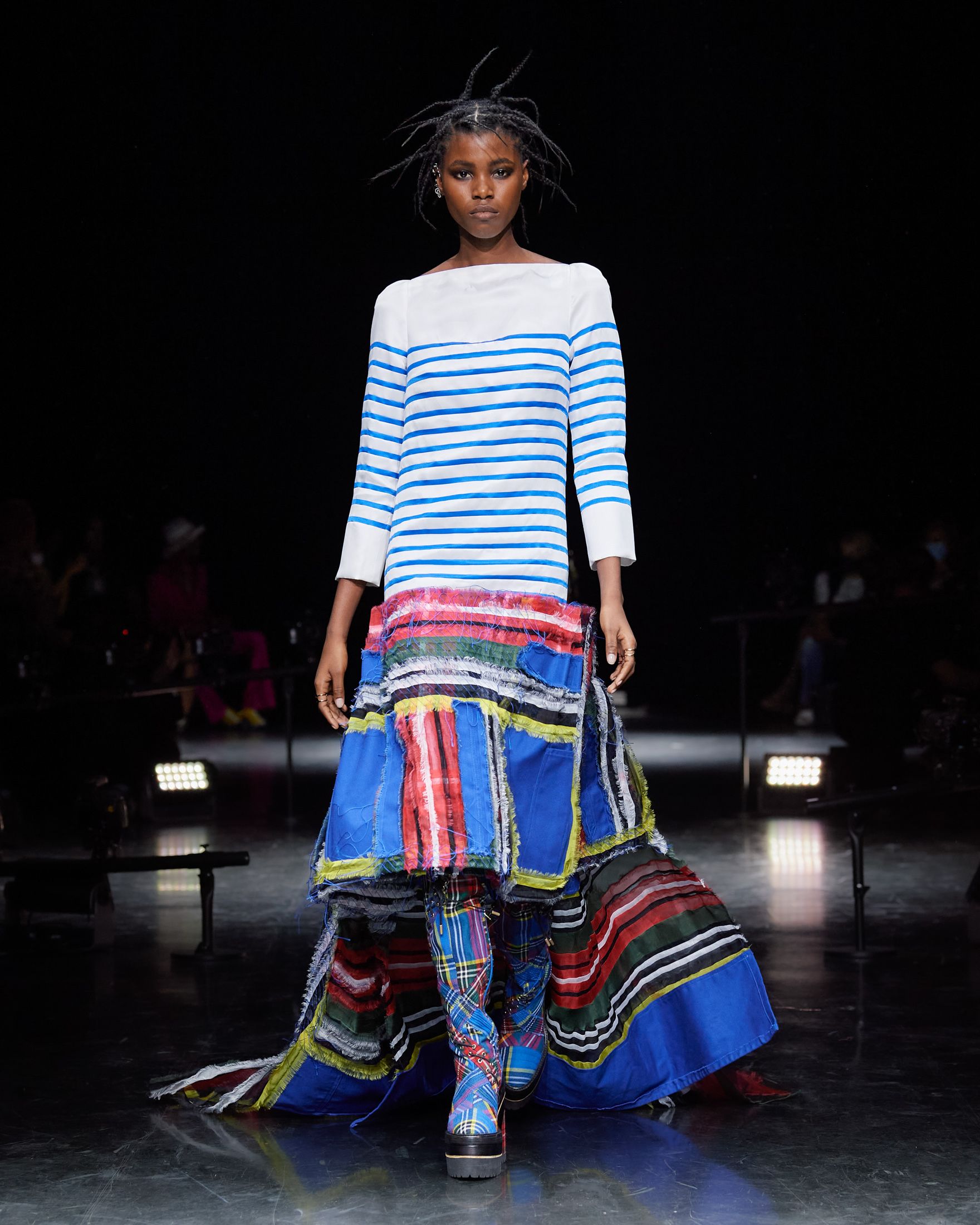 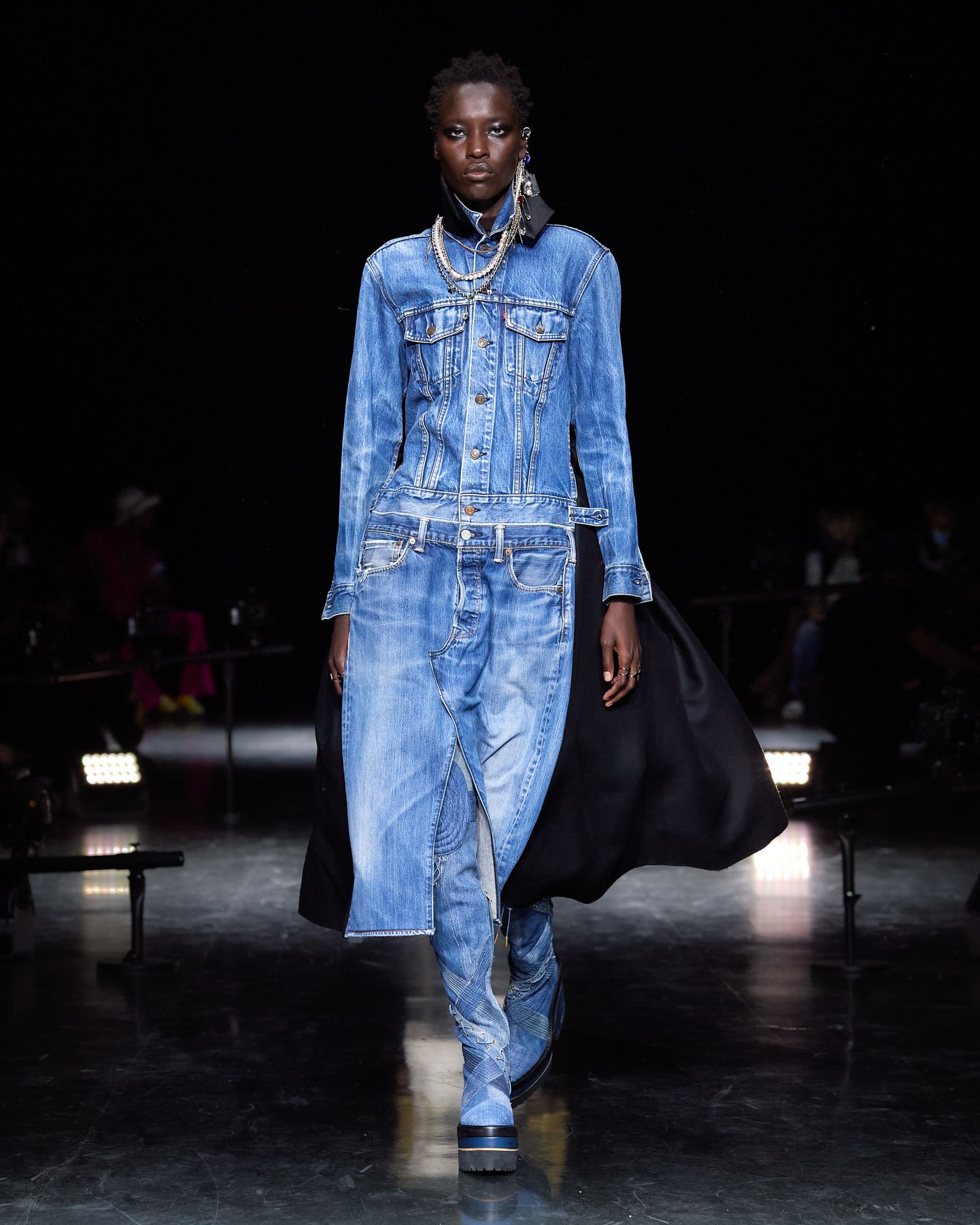 See the best looks from the collection, and shop the 8-piece Gaultier x Sacai ready-to-wear capsule collection including a t-shirt and leggings set with those tattoo prints, a Sacai bomber, three “Enfants terribles” t-shirts, and specially-designed limited edition Nike VaporWaffle sneakers on sale now at sacai.jeanpaulgautier.com.