Home » Fashion » Could Re/Done Be the Next Golden Goose? 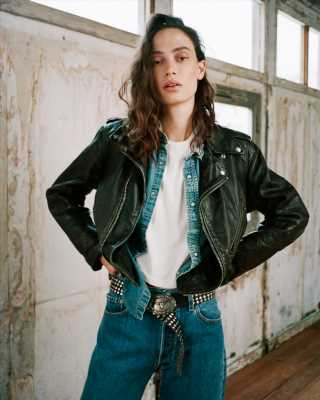 Could Re/Done Be the Next Golden Goose?

Los Angeles denim and ready-to-wear brand Re/Done is moving into its next phase of growth: retail stores. The first has opened in Malibu, a natural for the brand built on reengineered vintage Levi’s worn by many a model who has called the seaside enclave home, including Bella Hadid, the original face of the label way back when, before she was famous.

Located at Malibu Country Mart next to Maxfield, the 200-square-foot outpost is the smallest of four stores planned, including a 2,000-square-foot flagship opening in February on L.A.’s Melrose Avenue at Robertson Boulevard, as well as locations in Aspen, Colo., and East Hampton, N.Y.

Cofounders Sean Barron and Jamie Mazur started Re/Done in 2014 before sustainability was a fashion buzzword. “We didn’t know what sustainability was, it was two guys who wanted to cut up Levi’s,” said Barron, explaining that the two later realized the opportunity in creating a second life, not only for jeans but for American heritage brands Levi’s and Hanes, which have since become partners, and other collaborators along the way, such as Champion and G.H. Bass.

To date the men’s and women’s brand has upcycled, remade and sold nearly 100,000 pairs of Levi’s, and expanded into other categories, including producing its own Re/Done Originals jeans with waterless wash techniques, as well as Hanes T-shirts made from 33 percent recycled cotton or 50 percent recycled cotton-poly blend; vintage-inspired knitwear (some of which uses recycled fibers), and Seventies-inspired tennis shoes, runners and leather boots.

Signaling a redoubling of efforts to emphasize the sustainable part of its story, later this month Re/Done is launching its first Eco Sneaker made of a vegan leather and suede-like material from 100 percent recycled plastic bottles, for $420. The sneaker will launch exclusively on Instagram shopping on Nov. 18, and site-wide on shopredone.com, Matchesfashion and Net-a-porter on Nov. 19.

Milan-based private equity firm Style Capital SGR took a 30 percent stake in Re/Done in July 2018. “We talk every single day,” said Barron said of his new investors. Barron admires what Style Capital did for Golden Goose, helping triple its business in less than three years before selling its stake. “Where U.S. private equity might push us to do everything now, now, now, they always urge us to slow down and I love that.” 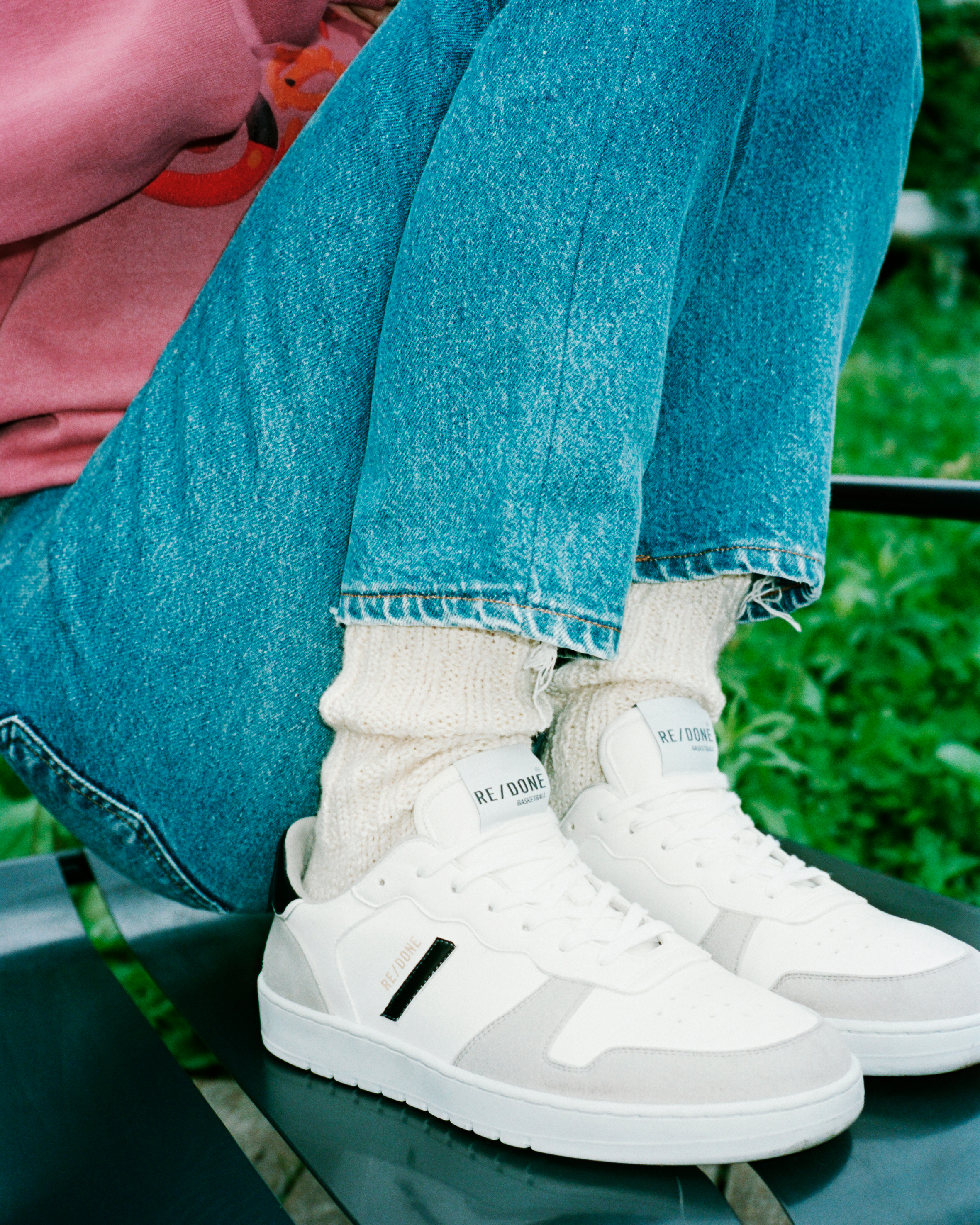 Declining to share specific revenue figures, he said Re/Done was charting 50 percent year-over-year growth before the pandemic, and is aiming for $50 million in total revenue for 2021. While retail stores were in the works before COVID-19 struck, the pandemic made the move more urgent.

“I hope it’s the right time. What I felt was people are going to come out of COVID-19 digging small environments where it’s comfortable and local,” said Barron. “I also dig these locations where second homes are becoming first homes.…When you think about next-gen retail, it’s small footprints instead of creating mausoleums and spending $1 million on a space, because it’s too risky,” he said, sharing that the brand had planned on opening in Manhattan’s SoHo but backed out.

He’s adding a marketplace component to stores, with product from outside vendors, including remade vintage eyewear from RetroSpecs, vintage Western belts and jewelry from Worn Over Time, and dried flower bouquets from Flowerboy Projects.

Barron’s L.A. fashion experience runs several decades deep; he cofounded the Katayone Adeli and Joie brands. Still, the coronavirus is the worst crisis he’s seen. “The first month was an oh-s–t moment,” he said, acknowledging the brand had to furlough some employees. “But immediately we were able to make masks, and people would buy a mask and want a jean. You could see it turning.” (Among the brand’s face mask offerings are ones made of upcycled bandanas.)

The Barneys New York bankruptcy was a big hit, and wholesale was off 80 percent overall for 2020. (Re/Done also sells at Neiman Marcus, Saks Fifth Avenue and Nordstrom.) But accounts are coming back for 2021, he said. “Some of our bigger partners in America have raised our profile…because we weren’t part of the wave of big denim and contemporary brands who had so much merch on the floor and so many markdowns.”

Still, Barron expects 60 percent of sales will be direct-to-consumer by 2021. Surprisingly for a brand that counts on denim for 50 percent of sales, including one-of-a-kind numbered pieces that require a personalized fit, e-commerce is a big driver. “We see a higher return rate, but also a higher exchange rate,” he said, explaining that he can see from data metrics single pairs of jeans that have been sold four to five times. 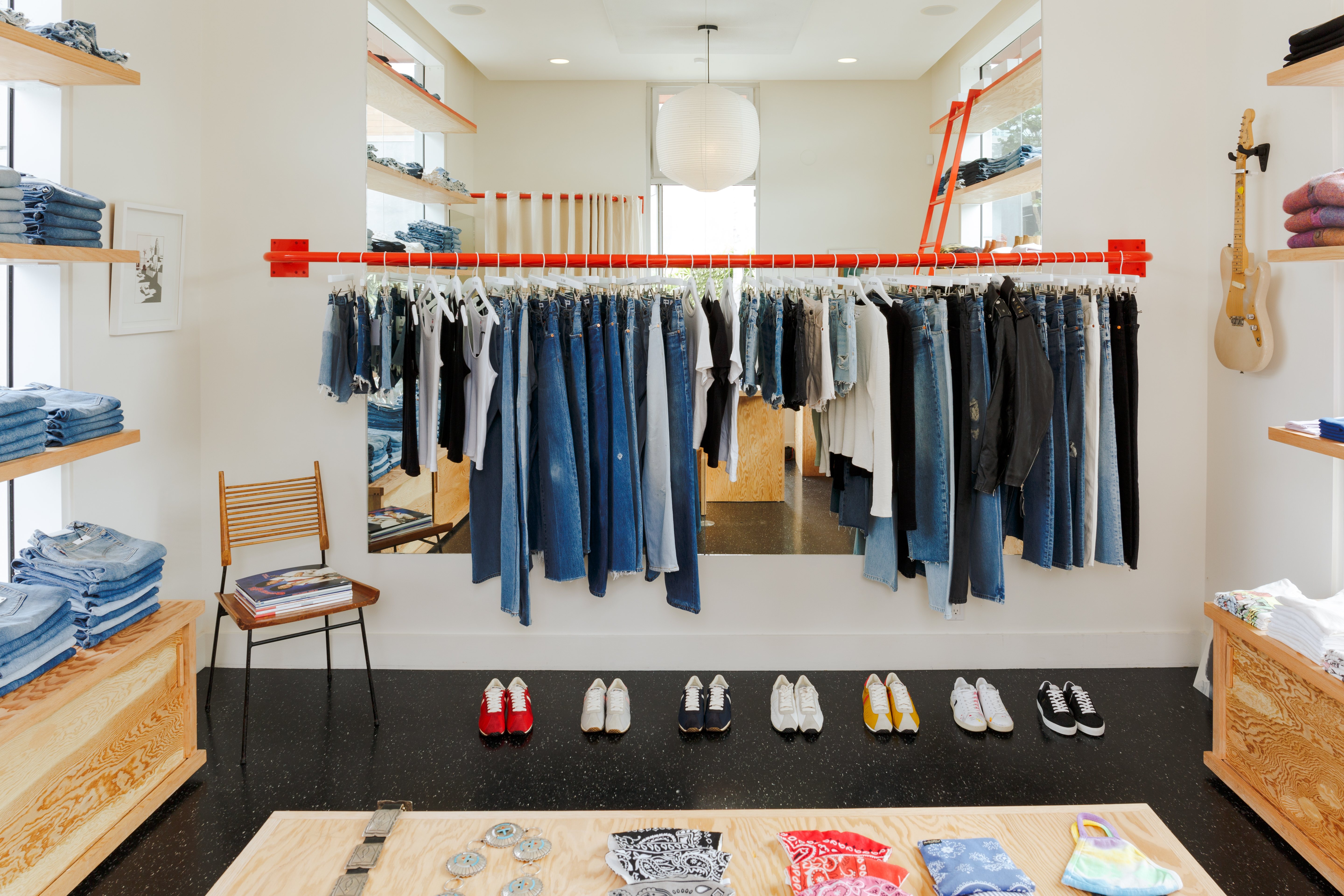 On Dec. 8, Re/Done will also open a dedicated European e-commerce site. “About 25 percent of web traffic comes from there but only 2 percent of conversion because tariffs add $100 or more to the sales,” he said, explaining why he’s also opening his own European warehouse.

Certainly Re/Done faces increased competition from resale players and the sustainable denim category, including from Levi’s itself, which recently launched its SecondHand buy-back and resale program, but Barron doesn’t seem fazed. “Levi’s has its core customer and I have mine,” he said. “It’s about how to be in a casual space without being a contemporary brand. You have to elevate what people think of you.”

Re/Done has a higher price point ($195 to $400 for jeans, $395 to $495 range for knits, and more than $1,000 for leather moto jackets) and a more luxury sensibility than most denim brands, owing in part to its visuals being shot in Paris, he said. “Our muse is a girl who grew up in California and then moved to Paris.” The brand has been steadily expanding into other categories. Knitwear is a highlight, including a Nineties-inspired space-dye grandpa cardigan and a shrunken Sixties-inspired musical note pullover in store now. “Everything comes from a vintage garment, which means I found it and reinterpreted it,” he said.

While the brand has over the years enjoyed a lot of visibility from celebs and influencers, including the Jenner-Hadids and past collaborator Cindy Crawford, these days Barron seems more interested in talking about continuing to innovate on the sustainability front, a message he’s taken on the speaking circuit to Harvard University, among other places.

“Influencers are communicating clothes, but we want to communicate our point of view and our clothes,” he said, before plugging Re/Done’s new Eco Sneakers in the leather-like material made in Japan from recycled bottles that the brand will have a one-year exclusive on. “What excites me is the passion I see in my team that is 100 percent excited about finding new and better ways to make things.” The brand employs 70 people in downtown L.A., where it produces about 50 percent of its clothing; denim is also produced in a Cradle-to-Cradle certified factory in Mexico, and footwear is made in Italy.

“I’ve been through 2008, I have seen destruction in business two or three times,” said Barron, hopefully. “What happens when the dust settles is that the strong are strong. Today, strong has to have a message. It can’t just be great jeans or suits, the new consumer wants to believe in the brand.” 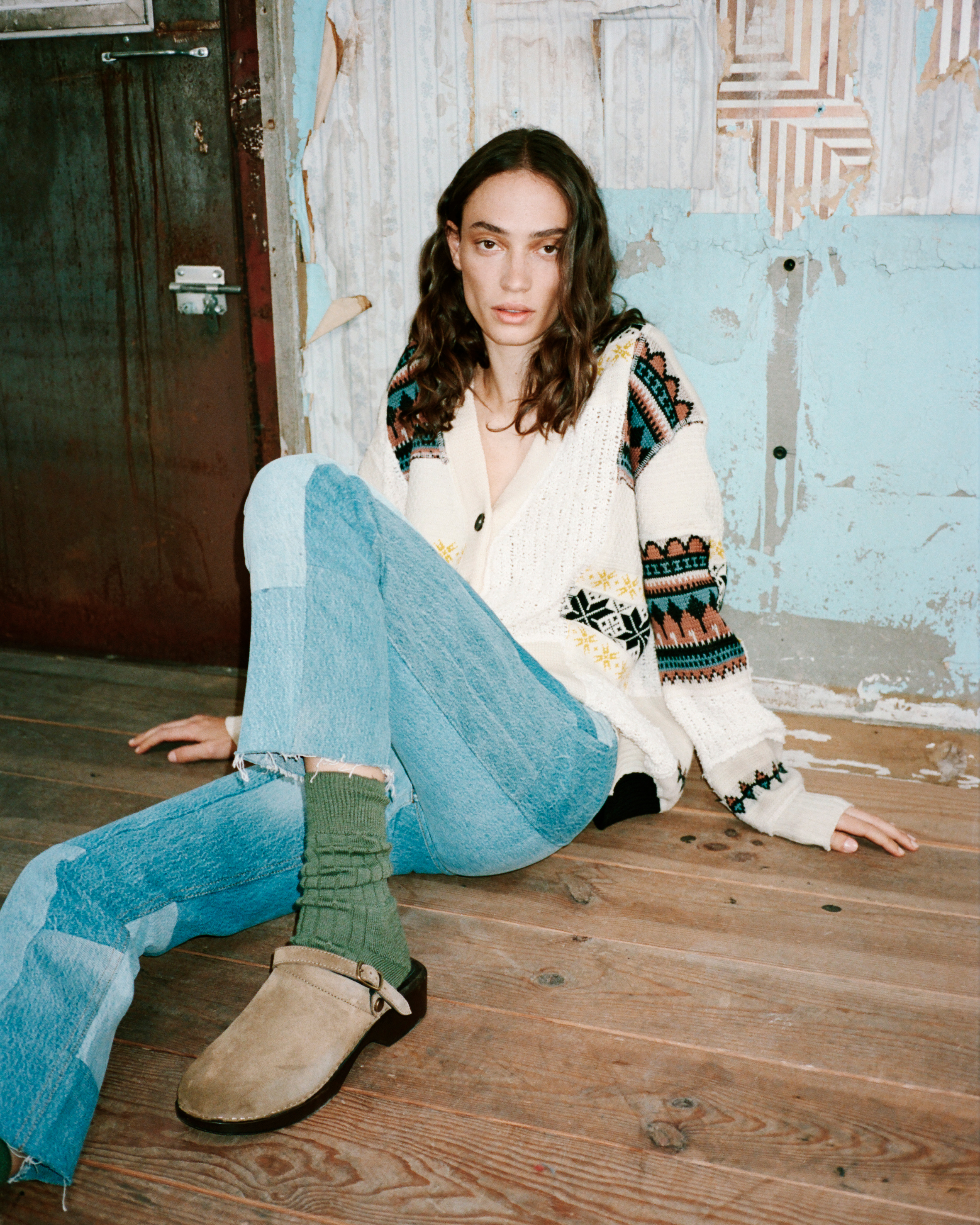 A look from Re/Done. Courtesy