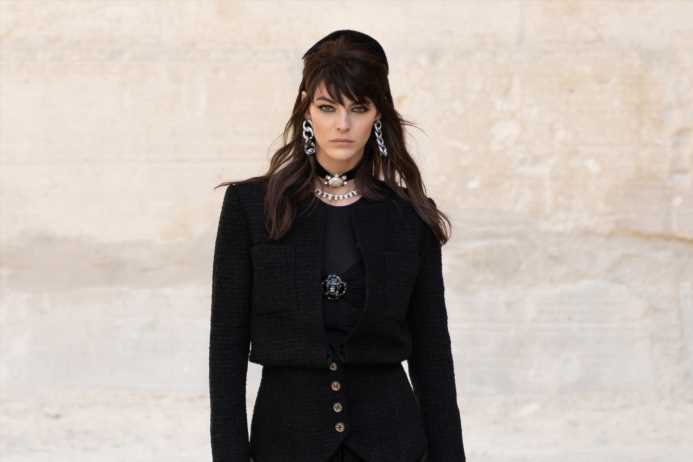 Les Baux-de-Provence, the picturesque hilltop village in the south of France, is known for its winding streets, sweeping vistas and the Carrières de Lumière. The limestone quarries are a major tourist attraction, hosting immersive light-and-sound shows dedicated to artists like Van Gogh and Cézanne.

For Chanel, the location has special significance: It served as the backdrop for the 1960 film “Testament of Orpheus,” directed by poet and playwright Jean Cocteau, who was a friend of founder Gabrielle “Coco” Chanel and by extension, part of the house’s lore.

So it was that a handful of its ambassadors — including Charlotte Casiraghi, accompanied by her mother Princess Caroline of Monaco; Vanessa Paradis; Alma Jodorowsky, and Caroline de Maigret — were whisked off to the imposing location mid-lockdown to attend the filming of Chanel’s 2022 cruise collection, unveiled online on Tuesday.

Kicking up clouds of white dust, models emerged against the chalky backdrop in a succession of graphic outfits that played up the contrast between black and white, or night and day. Creative director Virginie Viard’s starting point was a Surrealist image from Cocteau’s film: a man in a tight black outfit with a horse’s head and tail.

Cocteau and Chanel shared a fascination with beasts, mythological or otherwise: griffins and centaurs for him; lions, deer and sphinxes for her. Though Viard has been at the house for more than three decades, she confessed she was seeing its archives with new eyes since succeeding the late Karl Lagerfeld as artistic director in 2019.

“With Karl, I was more focused on listening to him. Now, it feels like I am discovering other facets of Chanel. When you read the letters that Cocteau wrote to her — maybe I knew about them, but I skimmed over them. Whereas now, they go right to my heart,” she told WWD.

“‘Testament of Orpheus’ blew me away. It’s full of amazing actors. It’s very simple — that’s what gets to me. It’s so on point, the dialogue is hilarious. It’s marvelous,” she said of the film, which features Pablo Picasso, Yul Brynner, and Cocteau himself in the main role.

Still, Viard was careful to distance herself from the poet’s obsession with mythology — save from one pristine ivory tiered column dress. “Otherwise, it looks Grecian right away,” she demurred.

Instead, she defaulted to her signature rock chic aesthetic, which took on a punky edge this season, with fringed leather skirts, open-knit sweaters and spiky jewelry, including a jeweled double-C piercing for the lower lip. These were balanced with a hefty dose of Riviera swagger, courtesy of flowing negligés, caftans and palazzo pants in prints including a calligraphic camellia pattern.

Model Lola Nicon was the face of the collection: she closed the show, and her moody features were emblazoned across a black concert-style T-shirt. But Chanel serves a wide demographic, so the display shot off in several directions.

Look closely, and you could pick out the Cocteau influences: a sleeveless tweed suit with a white sailor collar incorporated a vivid shade of blue found in the artist’s ceramics, while a draped white jumpsuit recalled a bondage-style costume that Chanel designed for his play “Oedipus Rex.”

Cocteau’s signature doves were woven into a high-collared lace dress, and loosely stitched on distressed sweaters. But Viard is not one to get bogged down in detail, a trait that can lend her collections a slightly haphazard quality. Among the false notes here were knit bra tops, and tweed mini skirts that did the curvier models no favors.

Standouts included a couple of dresses made from woven strips of chiffon in delicate watercolor shades — one of four eco-friendly tweeds featured in the collection, a third of which was in eco-responsible fabrics.

As a surprise bonus, Chanel screened a concert, taped in the gardens of the neighboring Baumanière hotel, featuring Sébastien Tellier duetting with guests including Paradis, Angèle, Juliette Armanet and Casiraghi, making her public singing debut — though her husky voice was barely audible.

Suffice it to say, there was Southern charm to spare, especially since travel between regions has been banned in France since early April. “I think it’s one of the most beautiful places I’ve ever seen,” Viard marveled. As models released a flock of white doves into the sunset for the finale, it was hard to disagree.