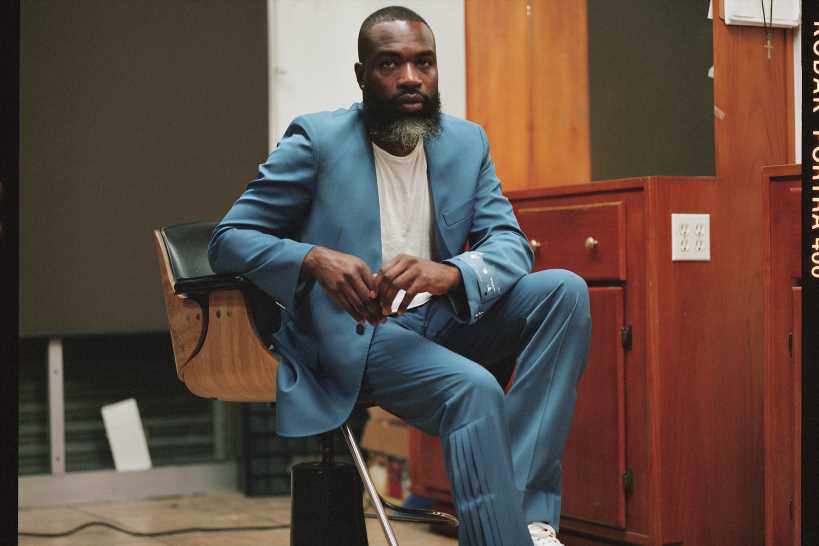 ‘Being Seen’ Explores and Celebrates Black Creatives’ Contributions to Culture

With the new “Being Seen” podcast, host Darnell Moore wants people to explore culture’s role in resolving the tension between how we are seen and how we see ourselves.

The first season’s focus advocates for a more diverse representation of Black queer and gay identities and experiences in fashion, entertainment and the arts. Beyond the 10-part podcast, which makes its debut today, the plan is to create a platform and also support Black gay and queer people to tell their stories through their art, works and images. The aim is “to create and curate a space for Black gay, queer and trans men and Black queer trans people to be celebrated and to share aspects of their complex lives and contributions not just to Black culture, but to American culture and global culture,” Moore said.

Each episode is based on a particular theme and includes artwork that can be viewed on the Being Seen site. Instead of standard back-and-forth conversations, the podcast’s multidimensional format is meant to make people feel like they are “listening in on this amazingly curated experience,” Moore said. Actor Lee Daniels, for example, does a reading from “Strange Fruit.”

The podcast is coproduced by Moore and Harley & Co., a creative studio that focuses on experiences, identity design and narrative content. Being Seen is entirely funded by ViiV Healthcare, a pharmaceutical company that is focused on ending the AIDS epidemic, which disproportionately affects Black men. The podcast is streaming on Apple and Spotify.

The intention is to give listeners insights into the perspectives and lived experiences of Black and gay men, “such as their consciousness can be raised,” according to Moore.

Secondly, Moore said, “In a moment, where we proclaim things like Black Lives Matter, right, I think the goal of the Being Seen podcast is to amplify that all Black Lives Matter. It is to say that even in a moment where we are asked to think about anti-Black racism and structural inequity, that we also have to tend to the various ways that queer and trans antagonism plays itself out on any [number of intersections] that exist in the lives of Black, queer and trans people.”

All in all, it is a show that is “all about love for Black culture” that also “insists that in Black culture, those cultural producers, some of us are also Black and LGBTQ, and [the show] is celebrating that,” Moore said. With episodes that center on themes like, love, intimacy, healing and religiosity, the idea is that listeners will find themselves involved in the shows in ways that they might be surprised by, Moore said.

“There is a conversation about love, where I am a Black queer man in conversation with Luke James, who is a Black cisgender straight-identified man. You have two Black men with vastly different experiences in the world, who are talking about love. It’s really allowing for some complex discussions with some really dynamic people,” Moore said.

Designer Jerome LaMaar and Harper’s Bazaar editor in chief Samira Nasr are among the style-minded guests on Being Seen. Speaking of LaMaar, Moore said, “We discuss his place, The Bronx, and how his home has shaped who he is, his approach in the world and his artistry. You want to talk about invisible-izing a person — here is someone who has contributed so much to a Black style, vernacular and fashion and is rarely celebrated for that. We talked about the work he has done with Beyoncé. But even before the groundbreaking work that people are celebrating now, he’s been out here and under celebrated in the field.”

To give Being Seen more dimensions, licensed and original artwork will accompany each episode. By going to its site, listeners will be able to see art from Kara Walker, Diedrick Brackens, Olivia F, Diana Ejaita, Khari Rahim, Ronald Jackson, Detour and others. In addition, photography has been curated by Texas Isaiah and Giincarlo Valentine from their archives and from photographers like Shan Wallace, Erik Carter, Jan Grey, Faith Couch, Kennedi Carter, Nate Palmer, Elliot Jerome Briwn Jr. and Clifford Prince King among others. Being Seen’s theme song, “Colouour,” was created by Moses Sumney.

As an activist and writer, Moore’s portfolio includes the book “No Ashes in the Fire: Coming of Age Black and Free in America.” He is director of inclusion strategy for content and marketing at Netflix, editor at large at Cassius and co-managing editor of The Feminist Wire.

Referring to Being Seen‘s episodes related to fashion and style, Moore said, “There is a way that we see the fashion and style world as separate and apart from all else. When, in fact, the reverberations of our political moment, the fact that folk are in the world, but they still bring their Blackness, or their otherness, their difference into the spaces with them and how that is not necessarily a negative. And how that actually adds to the industry — that is what I always take from those conversations.”

Perception versus reality is addressed in many ways. Asked about the higher rates of violence against Black trans people, Moore said that was particularly true of Black trans women. This year at least 30 transgender or gender nonconforming people have been fatally shot or killed by other violent means — the majority of whom were Black and Latinx transgender women, according to the Human Rights Campaign. These stories often go unreported or misreported, according to the HRC.

While Being Seen is meant to elevate and get at the lived experiences of Black queer and gay and trans men, Moore said “you can’t ever have a conversation about manhood or the experiences of men without talking about the impact of structural inequity on women, particularly in this case, trans women. In the same way, there is something to be said about the ‘invisible-izing’ of the lived experiences of Black trans men. We barely hear anyone talk about Black trans men at all, which is also a type of violence. It’s not physical. But the silence that is connected to the murders of Black trans women is a loud silence. In the same way that our ability with the culture, with the popular discourse with the media to lift up the lived realities, the fact that trans men actually exist, is also a loud silence.”

A study by the International Commission on Human Rights in the Americas, found that trans women of color had a life expectancy of 30 to 35.

Noting the need to humanize more Black trans people, Moore said that goes beyond the “small number of really famous Black trans women, who are now on screen, which we celebrate. There are so many more stories to be told about Black trans women and men, Black queer, gay and bisexual folk. We haven’t even reached the tip of the iceberg. That’s part of the purpose of this.”

There are plans to develop a resource list to give to listeners who are interested in learning more about the featured artists on the podcast to explore their creative work further.

Out magazine’s former fashion director Yoshua Simmons, who is now a fashion editor and stylist (as well as Moore’s partner), is featured in another episode. Simmons wrote “a beautiful descriptive narrative” to walk listeners through an image from a photo shoot that the couple has in their home. “In this moment, when so many fashion Black stylists, fashion editors, creatives and artists are being called upon, it reminded me of the gift that so many of them are bringing to the industries that they show up in even if Black folk have been denied in those spaces for a long time,” Moore said.

Acknowledging how it is easy for some at this time “to commoditize the mattering of Black lives” and that can be “a temporary fix for the longstanding work of correcting inequity within the industries,” Moore is looking further out. “Without a longstanding commitment to redressing the inequity, the inability to make space for folk in these industries that you carry over time, these temporary fixes become valueless. My hope is that there is a long-term vision and a long-term commitment to making the type of space that should have always been the commitment.”

He continued, “And yet I know that the danger is that folk feel as if to do this work at this moment, when it’s almost a demand from stakeholders and from the public that you do this one thing and we can move on. That’s what I like to call ‘cosmetic inclusion’ — you check off a box. There are people who feel to do that is to do their work, but it isn’t. I love that we have people on this show who can talk about how that commitment needs to be carried forward and  lived out — not just at this moment, but after.”

Zuckerberg, Dorsey and Pichai to testify before Senate on Oct. 28

LeBron James’s Teammates Beat Him, Then Joined Him
World News