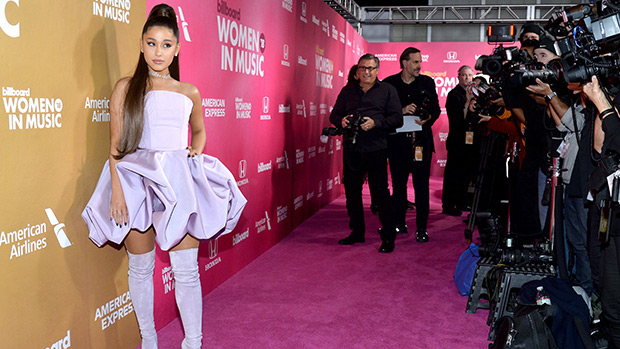 Ariana Grande wore the most beautiful lavender dress to the 2018 Billboard Women In Music gala. See stunning photos from the night!

Ariana Grande, 25, is receiving the honor of a lifetime at Billboard’s 2018 Women in Music event, and she dressed to the nines for the occasion, yet stuck to a very familiar look. The “Thank U, Next” singer arrived to the gala in style, donning a stunning lavender dress that featured a shoulderless corset bodice and a dramatic short skirt with billowing poofs of fabric. The songstress paired her number with matching thigh high boots — which have become her trademark– and had her hair up in her signature high ponytail with extensions going down to her waist. While while all of the night’s attendees, including, Kacey Musgraves, and SZA, looked incredible, Ari truly stole the show.

It was Ariana’s night to shine, as she joined the likes of Selena Gomez, Madonna, and Lady Gaga, who have previously accepted the honor of Woman of the Year. It couldn’t have been a more fitting choice from the publication, after Ariana’s all-star year saw her breaking records, boundaries, (and a few hearts.) The “Thank U, Next” sensation was beaming as she arrived to the event, which recognizes those “who have made significant contributions to the business and who, through their work and continued success, inspire generations of women to take on increasing responsibilities within the field” according to the magazine.

Ari wasn’t the only A-lister getting honored at the annual event. SZA and Kacey received nods as well! SZA is the recipient of the 2018 rule breaker award, which recognizes female artists who use their music and platform to defy traditional industry expectations, and advance a powerful message for young people. Country queen Kacey was the recipient of the innovator award, which recognizes “female artists who challenge musical convention, create positive change and contribute new ideas both in and outside of their creative work,” according to Billboard. Well deserved, ladies!

Cheers to miss Ariana! After an epic year, she deserves this so much, and we love how she is absolutely glowing in this ensemble!