Home » Fashion » Are You Cleaning Enough? Celebrities Want to Help. 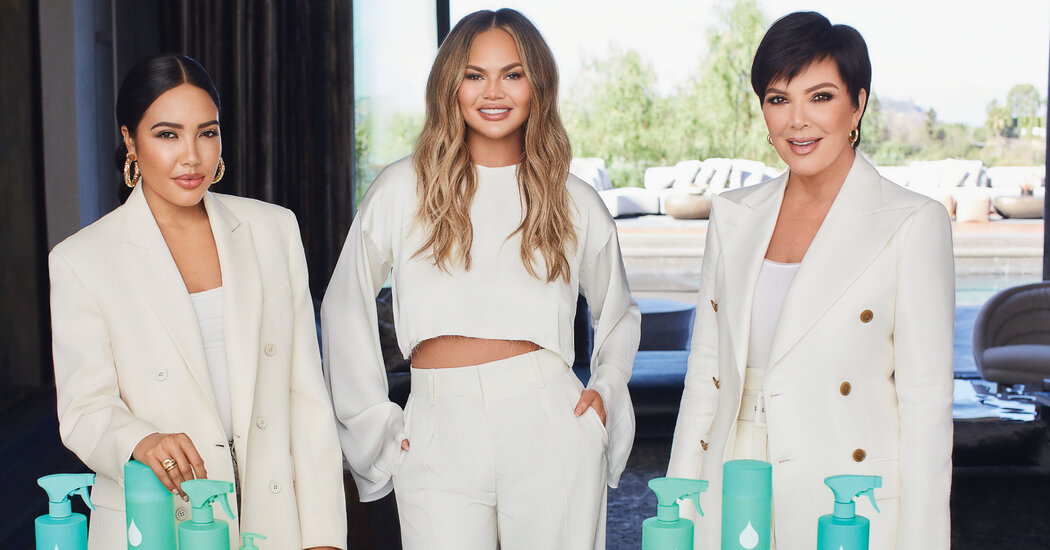 Are You Cleaning Enough? Celebrities Want to Help.

“I want my own product line because honestly everyone has one already,” Ms. Teigen says in the Instagram video, satirizing the world of celebrity sponsorship she inhabits. “I even have one.” (Ms. Teigen’s company, Cravings, sells cookware and other things.)

The reveal of the new product’s name, Safely, follows a punchline invoking a sex act.

Despite the women’s sendup of influencer capitalism and its often random items, it is a fully formed brand, a line of vaguely plant-based cleaning products that has long been in development, as it happens, although right now it is a business well timed to the cultural moment.

As many of us slowly emerge from more than a year of lockdown, we are still twitchy about hygiene — focused on our sticky counters, and possible sticky encounters — and still bulk-buying Clorox Wipes, whose sales last year rose nearly 30 percent, as did those at P&G (which makes Mr. Clean and the Swiffer, among other cleaning products), as The Wall Street Journal reported.

Yet many consumers are eager, says one market research company, to not only spend more time cleaning their homes in the future, but spend more money on products without harsh chemicals to do so. As a result, sales of home cleaning products are projected to nearly double over the next six years. 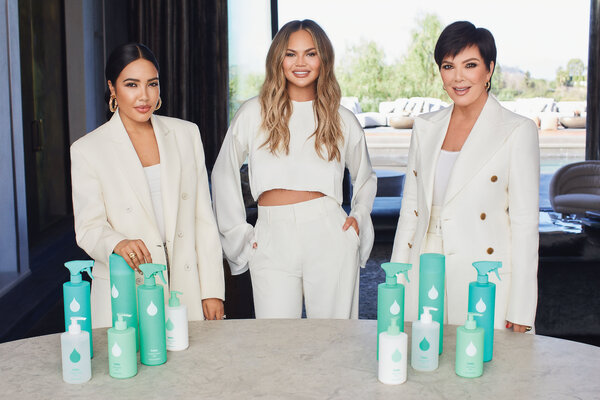 Despite playing the fool, Ms. Teigen is no dummy. And Ms. Jenner’s business acumen no longer needs to be detailed. While the two women are Safely’s pitchmen and investors, they are not alone in the venture.

Emma Grede, a London-born fashion entrepreneur who is a founder, with Khloé Kardashian, of Good American, the inclusive denim brand (and whose husband, Jens Grede, is a partner in Skims, Kim Kardashian West’s shapewear company), is Safely’s originator. She was canny enough to investigate the product category and to know whom to team up with, and Ms. Teigen and Ms. Jenner, who are also her friends, were sharp enough to say yes, all of which the three women explained in a Zoom interview Friday.

Ms. Teigen appeared in what looked like an enormous iridescent bow, and ostensibly nothing else.

“I know,” she said. “It looks like I’m naked.” Ms. Teigen had been trying out the tasting menu of Crustacean, a Vietnamese restaurant in Beverly Hills, and sat alone in a booth with her large bow. Ms. Grede and Ms. Jenner were at home and more soberly dressed.

All three admitted to being neatniks, but Ms. Jenner, as always, took the lead, outlining behavior that would make Marie Kondo proud: weekends spent organizing her closets and lining up the points of her shoes just so; the habitual purging of drawers and the deployment of “doodads,” as she put it, within, to make the contents smell nice.

Longtime watchers of “Keeping Up With the Kardashians” will recall scenes that showed off Ms. Jenner’s exacting taste, and her desire for precision in furniture placement as well as storage areas.

“In my DNA is the extremely strong desire to always be cleaning everything,” she said. As a young mother with four children, she was an enthusiastic Pine-Sol user. “If I had that smell, that meant my house was clean,” she said. “I’ve done a 180 in the way I identify what clean means to me.”

She added: “Poor Khloé, we all have the same gene. If I go over to Khloé’s house, she’s walking around with a bottle of something, scrubbing, at all times.”

(Indeed, a teaser for one of last season’s episodes of KUWTK showed that daughter sponging something off her white walls — these being Kardashians, it turned out to be body makeup — the fallout of a fight between Kim and Kourtney.)

Cleaning, of course, has long been women’s work, and that is Ms. Jenner’s specialty: hers is a female-dominated kingdom — Amazona! — where the males are vestigial. She recalled growing up working in her grandmother’s candle shop, graduating from the wrapping department to the cash register; how as a young woman she worked as a stewardess, and later ran a children’s store. Her fans will remember her early hustle, pitching a modern Brady Bunch (with a sex tape) to a bemused Ryan Seacrest.

“I dipped my toe into what turned out to be an ocean many years ago,” she said. “I come from a background of really strong women who were very excited to get into businesses of their own to keep the lights on.”

Ms. Teigen said: “Even though our lives seem so over the top and so bonkers, I think people do see themselves in the mistakes we make. And there is something to be said for being able to see yourself in someone that is trying to get you to buy something, to love something.”

Of course, Safely is not the first disrupter of the cleaning space, as marketers like to say. At the turn of the last millennium, in the post-feminist world where an earlier iteration of Martha Stewart once reigned, places of drudgery, like laundry rooms, became aspirational spaces.

Cleaning products were infused with essential oils and exotic scents like patchouli and green tea and sold as aromatherapy. Cleaning equipment was reimagined with retro styling, as beautiful objects worthy of display. Restoration Hardware, when that company really was a hardware store, albeit a high-end one that ran on nostalgia and narrative merchandising, sold horsehair brooms and wool dusters. Williams Sonoma taught customers to buy $95 dustpans, and $9 parsley countertop scrub. The act of cleaning by unpaid laborers — as sociologists sometimes call women working in their own homes on domestic tasks — was at the same time elevated by an air of expertise and professionalism.

A lawyer and philosophy professor named Cheryl Mendelson produced a nearly 900-page cleaning primer, “Home Comforts: The Art and Science of Keeping House,” like a Mrs. Beeton but with a Ph.D., and Ms. Stewart followed suit, some years later, with her own more than 700-page treatise, “Martha Stewart’s Homekeeping Handbook.”

And a former Target marketing executive who had been making luxury cleaning products called Caldrea, pivoted to a more accessible brand, named it for her mother, and Mrs. Meyer’s Clean Day — plant-based products that smelled like lavender or geranium or basil, not bleach — hit the grocery store shelves. So did Method, designed to match your modernist décor, and which also smelled nice, and the category was forever changed.

That was nearly two decades ago.

What is particular about Safely is not its celebrity boosters, or even its contents. I tried all six of its products, from the Hand Sanitizer, $6, to the Everyday Laundry Detergent, $14. They have pleasant, mild scents: the Universal Cleaner, $6, smells like lemongrass; the Hand Soap, also $6, faintly musky, like sandalwood. They did their jobs.

It is the packaging that is notable.

The containers are simple, and oversize. There is barely any type; the logo, the only discernible graphic, is a large white water drop shape. The different cleaners come in a medley of glowing, minty greens. The whole is distilled into the kind of generic yet brightly colored minimalism that plays so well on Instagram. The products read like Product, with a design so reductive there could be anything in there.

Why not, as Ms. Jenner pointed out, have a coherent array of bottles under your sink, instead of “a bunch of mishmash or doodads that don’t go together?”

I wondered what the greens were. What were their names? Certainly not the Lichen or Mizzles of an English paint company. Or the flat teal that is a foil for so-called Millennial Pink, also known as Baker-Miller Pink or Drunk Tank Pink, from the ’70s-era social science experiment that showed how a certain shade calmed prisoners (and, in 2017, Kendall Jenner, who painted her living room in the rosy hue).

And how were they decided upon?

“It took a little while, I’m not going to lie,” Ms. Grede said. “We wanted to get something we would be happy to look at. We were looking at greens that would be beautiful together. There were lots of different names. I don’t have the Pantone palette drilled into me.”

A friend declared them gremlin green, as they read to him like the skin of a cartoon character.

I would say they are the color of money, freshly minted.