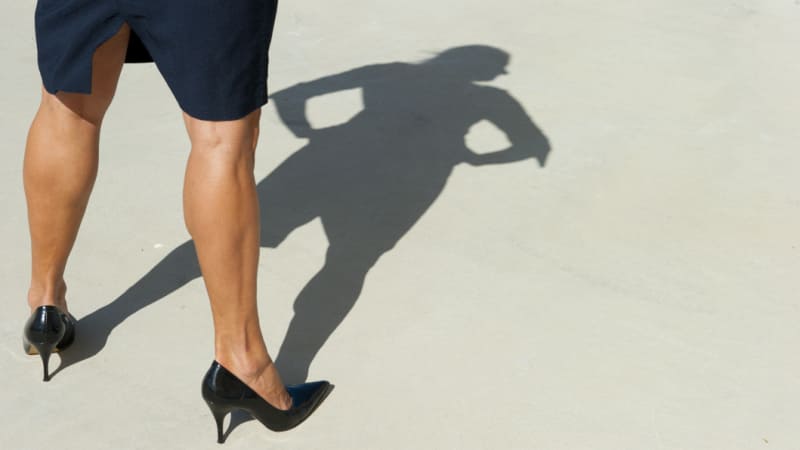 I clocked her on a crowded old train which was dragging itself around Sydney's CBD on a late November afternoon.

With a display folder in hand, pencil skirt on torso, and eyes nervously watching the display scroll through the service's upcoming stops,  the young woman deserved a Helpmann for her portrayal of "school leaver going to summer job interview" in the city's newest underground performance venue, carriage number 3671. 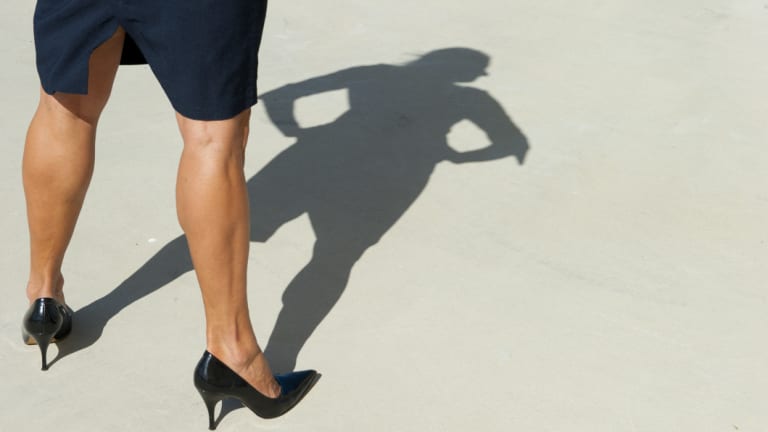 Tan pantyhose have been rejected by younger corporate women.Credit:Shutterstock

She was also sweating a lot.

I hardly needed to look to know the source of her failed temperature regulation: her legs, several tones more orange than the rest of her, were covered in a thick pair of tan pantyhose.

And that was when I wondered: has anyone under 30 ever worn a pair of tan pantyhose to work without their mum telling them to?

The human sausage casings are observably on the way out among millennial corporate types, who recognise there is nothing wrong with exercising a right to bare legs. Even in the most strict of workplaces – the courts, banks – with each new intake of grads the once ubiquitous item for working women is becoming increasingly endangered.

Mackinnon says younger women are rejecting the pantyhose for a number of reasons beyond mere comfort.

Personally, I hope they will soon be extinct.

The last time I wore a pair of satan's stockings was following events I suspect were similar to those which led to that woman overheating between Town Hall and Central like a Leppington service.

The year was 2012 and the teenage job in question was a Christmas casual gig at my local Myer. Unfortunately, the training for this job was at a much less local Myer. It would take two-and-a-half hours and four interchanges to get from one public transport blackhole to the another.

Instructed to wear corporate attire, I presented my collared-shirted self to my mum for inspection before leaving the house.

"I'd wear tan stockings," she said.

So I did. I put on a pair of tan pantyhose – a whole makeup counter darker than my skin tone (which L'Oreal flatteringly refers to as "Rose Ivory" but is probably just "white but with red blotches") – and walked out the front door into the 40 degree heat.

Cue: excessive sweat, a rather unfortunate rash, and a pair of stockings peeled off in a public bathroom.

Melbourne personal stylist Sally Mackinnon says she has "absolutely" observed a drop in the number of women wearing tan pantyhose to work "over the past five years".

"It's in decline across most age groups, but probably predominantly the under-40s," she says. "Whereas I find my more senior clients are a bit more traditional in that they feel a pantyhose is 'appropriate'."

Mackinnon says younger women are rejecting the pantyhose for a number of reasons beyond mere comfort.

"They see it as an old, stuffy tradition. And it's so easy to put your fingers through a pair of pantyhose; they see it as a bit of a hassle that they don't need in their life."

Then there are the aesthetic considerations.

"More people are fake tanning, so they might not think they need the pantyhose," she speculates, adding that some just feel that their legs look the way they look, and they don't need to cover them.

"It's probably never even come into their minds, it hasn't even been part of their dress code; you don't really see women wearing pantyhose now when they're going out on a Saturday night."

For her older clients who do still want to wear pantyhose in the summer months, Mackinnon says there are some higher quality brands which look less "like you're wearing a pantyhose", although for women who entered the workplace before "dress for your day" policies and relaxed dress codes, the pantyhose appear to be here to stay.

"They are more likely to think 'some traditions are just the way they are' and feel more comfortable wearing them," she says, adding that older women also tend to tell her they find stockings to be more "flattering" than a bare leg.

Because that is really what all of this divided opinion is about: where women strike their own balance between comfort and aesthetic with a corporate wardrobe. For stockings stalwarts, tan pantyhose is (somehow) in the overlapping part of that Venn diagram. For younger generations, it's not even on the same page.

But, it is nice that the choice now exists; that women can dress in office attire without a pair of sticky pantyhose and get on with things without anyone batting an eyelid.

(Except for their mum on the morning of their first proper job interview. Sorry, we all have to cop that.)