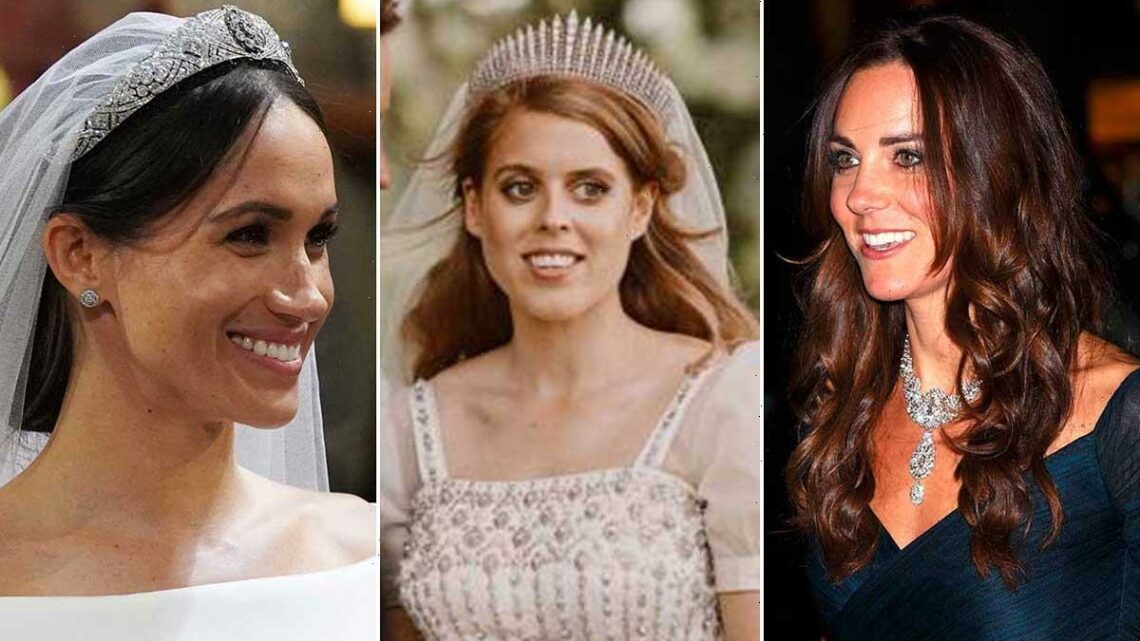 They say diamonds are a girl’s best friend, and that’s certainly the case for Her Majesty the Queen. The 95-year-old monarch has a treasure chest filled with jewels, which she regularly lends to members of her family. Some of her most stunning pieces have been seen on the Duchess of Cambridge and the Duchess of Sussex on their wedding days.

The Duchess of Cambridge borrowed a pair of stunning sapphire and diamond earrings from the Queen when she watched Cruella at a drive-in cinema event at the Palace of Holyroodhouse in Scotland in May 2021.

The Dubai Looped Sapphire Demi-Parure was gifted to Her Majesty during her Middle East tour in 1979.

For her marriage to Edoardo Mapelli Mozzi on 17 July 2020, Princess Beatrice was given the honour of borrowing Queen Mary’s diamond fringe tiara – the headpiece the Queen wore on her wedding day to Prince Philip in 1947. The tiara was originally made for Queen Mary by Garrard and Co. in 1919, from a diamond necklace given by Queen Victoria for her wedding.

It is believed the Queen first wore these large teardrop earrings, which feature a line of four diamonds framed by a cluster of round diamonds, at the State Opening of Parliament in 2012. Kate was recently spotted wearing them with an emerald green £1,000 Emilia Wickstead dress for the NATO reception at Buckingham Palace.

The brunette beauty has worn the gems on multiple occasions, including at the Place2Be Awards in 2016, a gala at Kensington Palace in 2017 and while on tour in Norway and Sweden.

MORE: The Queen’s most glittering tiaras in her personal jewellery collection

The ruler of Bahrain gave the Queen several large pearls as a wedding present in 1947. Two round pearls were used on the bottom of these dangling earrings. Like many of the Queen’s jewels, the earrings were put away after the 1950s, only to be worn first by the Countess of Wessex and later by the Queen and then Kate.

In August 2018, the Duchess of Cambridge was spotted wearing the stunning earrings with a grey and black Catherine Walker coatdress while visiting Balmoral.

MORE: All the times Sarah Ferguson dazzled in the York tiara after her wedding

Royal watchers may remember seeing the breathtaking Cartier Halo Tiara on Princess Anne in 1970, during her tour of New Zealand. If not, they’ll definitely recognise the spectacular piece from Prince William and Kate’s royal wedding. The Duchess of Cambridge was a true fairytale bride wearing the tiara that was given to the Queen on her 18th birthday when she was still Princess Elizabeth.

MORE: All the times Kate Middleton has worn a royal tiara

Meghan looked sensational on her wedding day, topping off her bridal look with the Queen Mary Diamond Bandeau tiara. The tiara is a little-known piece which was first created for the Queen’s grandmother Queen Mary back in 1932.

It features a stunning floral-shaped suspended brooch in the centre and 11 intricate glittering sections in the bandeau. Queen Mary bequeathed the bandeau and brooch to the Queen on her death in 1953.

MORE: Will Meghan Markle wear a tiara again after stepping back as a senior royal?

The Countess of Wessex wears the Five Aquamarine Tiara, and it’s assumed that the Queen has permanently loaned the jewel to her daughter-in-law. Sophie has worn it on numerous occasions, including the pre-wedding dinner of the Hereditary Grand Duke of Luxembourg in October 2012 and during the wedding of Princess Madeleine of Sweden in 2013.

MORE: 14 times the Countess of Wessex has dazzled in a tiara

Sophie paired the tiara with the King Faisal Diamond necklace, which Princess Diana also wore for a visit to Australia in 1983. The necklace was purchased by King Faisal of Saudi Arabia in 1967 as a gift for the Queen on a state visit to the UK.

The Lover's Knot Tiara was given to Princess Diana on a permanent loan until her death in 1997. The tiara, which was originally made for Queen Mary as a replica of a tiara owned by her grandmother, was inherited by the Queen in 1953 when Mary died.

Diana is said to have complained about the swinging pearls; nevertheless, she looked lovely in it, and Kate went on to wear it 2015 and 2016 at the Diplomatic Receptions held at Buckingham Palace.

Made for Prince Philip's mother Princess Alice, the Meander Tiara was given to the Queen as a wedding gift in 1947. Her Majesty has never worn the piece publicly but her daughter Princess Anne used it for many of her appearances in the eighties. Her daughter Zara famously wore it to her 2011 wedding.

Here, the Queen Mother, the Duchess of Cambridge and Princess Anne are all seen wearing the Irish Guards Brooch. Anne wore it every year when she handed out shamrocks from 2002 until 2011, a role that Kate took over in 2012. The Duchess of Cambridge continues the tradition and fittingly wears it at the St Patrick's Day parade.

This ruby and diamond floral bandeau necklace was bought from Boucheron in 1907 by Mrs. Ronald Greville, who willed her jewellery to the Queen Mother on her death in 1942.

Given to the Queen by her parents as a wedding gift, the long necklace was shortened by the monarch, yet its size still made it a difficult piece to wear and by the 1980s, it was put away. In July 2017, it reappeared around Kate's neck at the Spanish state visit banquet.

The Queen may have been inspired – less than a year later, she wore it to the Commonwealth dinner in April 2018.

Originally made from a necklace that belonged to the Queen Mother, the dainty Lotus Flower Tiara is seen on Kate in 2015 during the Chinese State Banquet and before that, Princess Margaret.

Mrs. Ronald Greville, a high-society lady who was good friends with the Queen Mother, left all her jewellery to the Queen Mother on her death in 1942. In the fifties, she had the Greville Tiara altered and wore it to several occasions, well into her later years.

Nowadays, the tiara is a favourite of the Duchess of Cornwall, who is pictured wearing it here in November 2013 during a visit to Sri Lanka.

MORE: Revealed: why Camilla was the only royal bride without a tiara for Prince Charles wedding

The Queen chose Queen Mary's Fringe Tiara for her wedding to Prince Philip in 1947. The elegant headpiece originally belonged to the Queen Mother, who wore it for her first official portrait.

Princess Anne followed in her mum's footsteps some 26 years later and wore it on her own wedding day in November 1973. Anne and Mark Phillips were married until 1992.

When Prince Philip proposed to the Queen, he was a Royal Navy officer without much money. So, his mother gave him a tiara that jewellery firm Philip Antrobus Ltd. turned into his fiancée’s wedding ring.

The rest of the diamonds were transformed into a wide geometric bracelet made of three symmetrical sections, each with a large diamond in the centre, linked by more diamonds. The Queen has worn the bracelet regularly since then, and, in 2015, loaned it to Kate for a state banquet.

The monarch was gifted this diamond and platinum necklace by King Khalid of Saudi Arabia during a visit to the Middle East in 1979. The Queen has worn it frequently, and loaned it to Princess Diana in 1982. Here, she is pictured visiting the Barbican Centre while she was pregnant with Prince William.

The Nizam of Hyderabad, then one of the richest men in the world, gave the Queen the ultimate wedding gift: anything she wanted at Cartier. She opted for diamonds, choosing an ornate floral tiara and matching necklace, which includes a detachable double pendant drop.

While the tiara was dismantled – except for three floral brooches built into the tiara – she continued to wear the necklace, especially in official portraits. In 2014, Kate donned it for the National Portrait Gallery's annual gala.

The New Zealand fern was transformed into a platinum-and-diamond brooch and given to the Queen by the women of Auckland during her first visit to their country in 1953.

Frequently worn by Her Majesty on Kiwi-related events, including a rugby event in London in 2008, it was pinned to Kate's coatdress when she arrived in New Zealand's capital, Wellington, in 2014.

This diamond Cartier brooch in the shape of a maple leaf originally belonged to the Queen Mother, who passed it down to her daughter, the Queen, when the monarch was making her first visit to Canada in 1951. Kate went on to wear it on Canada Day in 2011, while the Duchess of Cornwall has also donned it in 2009.

For the Queen and Prince Philip's 70th wedding anniversary dinner, Kate opted to borrow Her Majesty's four-strand pearl choker. The necklace, which was originally commissioned by the Queen using pearls that were a gift from the Japanese government, is fastened with a diamond clasp.

Kate is seen wearing the diamond and sapphire fringe earrings in 2015 at the 100 Women in Hedge Funds Gala – the same pair worn by the Queen Mother in 1986.

Of all of the jewels that Kate has borrowed, this pearl and triple leaf brooch is the most mysterious. Aside from one public wearing of the large brooch on a royal visit to South Korea in 1999, there's no record of it being worn again in public. That is until Kate wore it in July 2017 to mark the 100th anniversary of Passchendaele in Ypres, Belgium.

The Queen has several pairs of discreet diamond-and-pearl earrings that she wears in the daytime. However, for the Silver Jubilee celebrations in 1977, she donned earrings with a distinctly larger drop pearl. After that, no one saw them in public. But in 2016, Kate borrowed them for two overseas trips, first to Canada and then to the Netherlands.

In October 2018, Kate paid a special tribute to her late mother-in-law by choosing to wear Princess Diana's Collingwood pearl earrings, which she teamed with Queen Alexandra's wedding gift necklace.

Kate wore her brunette hair in her trademark glossy blow-dry, topped off with the exquisite Lovers Knot tiara. The Queen Mother was also a big fan of the necklace, which she previously wore on her 85th birthday in 1985, and during a formal appearance in 1964.