Home » Fashion » A Ride of a Lifetime to a Catskills Retreat 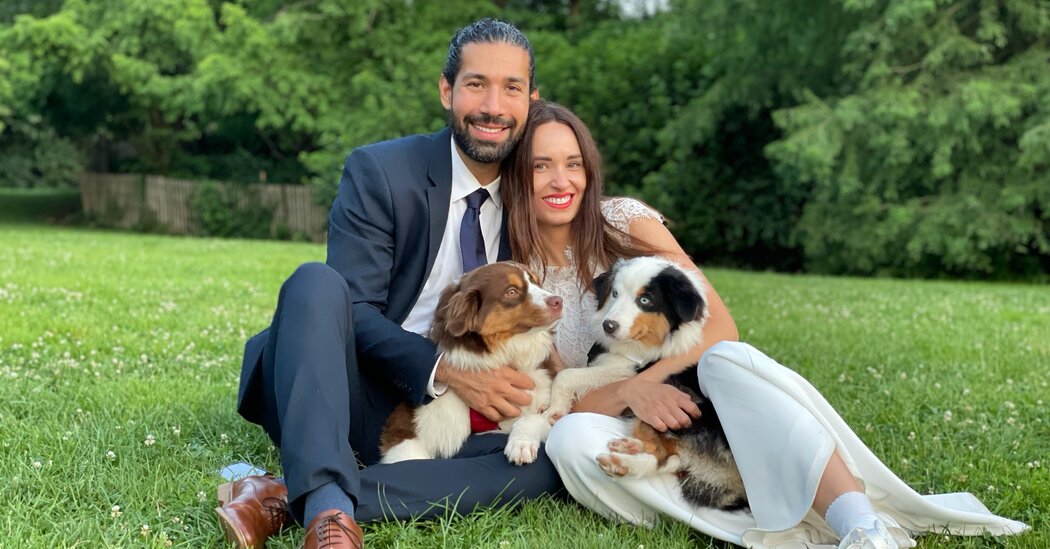 A Ride of a Lifetime to a Catskills Retreat

Florence Christina Johnson met Dr. Nima Yazdanpanah in September 2019 when she got a ride with him arranged by the organizer of a weekend spiritual retreat in New York’s Catskills region.

“I see this good-looking guy with big basketball shorts and curly, crazy out-there hair,” said Ms. Johnson, who took an Uber to Williamsburg, Brooklyn, from the West Village, to head upstate with him and another person attending the retreat.

Even off-the-clock Dr. Yazdanpanah, an osteopathic doctor with a holistic approach to Eastern and Western medicine, provided craniosacral therapy and body work to a few guests, but gave most of his attention to Ms. Johnson, who like him is a vegan and does not drink alcohol.

“I found it calming and soothing to be in her company,” said Dr. Yazdanpanah, 33, who received a doctorate of osteopathic medicine from the Philadelphia College of Osteopathic Medicine.

He is currently a third-year resident in physical medicine and rehabilitation at the SUNY Downstate Medical Center and the program director at the New York Society of Physical Medicine and Rehabilitation in Manhattan. He graduated with highest honors from the Georgia Institute of Technology, and until 2011 sang contrabass with the chorus of the Atlanta Opera.

“He’s genuine, calm and insightful,” said Ms. Johnson, 36, who is the owner and founder of the Manhattan Nanny and Staffing Agency. She graduated from Stockton University in Galloway Township, N.J.

A week after the retreat, after several lengthy texts, he invited her to a live music dance party at a warehouse in Williamsburg, where they had their first kiss.

They soon began spending all their free time together.

“‘You know Nima came across the world to find you,’” she recalled her mother saying after she met him a few months later.

In 2005, at the age of 17, Dr. Yazdanpanah, who follows the Baha’i Faith, left Iran and his family for Turkey to seek religious asylum in the United States. His aunt in Atlanta sponsored him two years later.

“The Baha’is are persecuted in Iran,” he said. “I couldn’t go to university or obtain work permits.”

Ms. Johnson, who grew up in New Jersey, embraced Persian cooking, culture and the Baha’i Faith, which she now follows.

“It was so exciting,” she said, “new holidays, new spices and new recipes.”

In 2020 for Valentine’s Day she made him a vegan version of khoresh gheymeh, an aromatic split-pea stew topped with Persian-style French fries.

“It was as tasty as my grandma’s cooking,” he said.

In March, as the coronavirus pandemic hit, he worked the front lines as an emergency medicine fellow at NYC Health + Hospitals/Woodhull in Brooklyn. They both contracted the coronavirus, and while they quarantined together they did a lot of jigsaw puzzles, and grew closer. In August 2020, she took the leap and moved to his apartment in Williamsburg from the West Village.

“Florence is a bright and shining light that has always been there just waiting for me to be ready to meet her,” he said.

On Oct. 5, 2020, while they revisited the Catskills retreat, right after he woke up he decided to propose. He quickly set up a computer in the dining area to Zoom in friends and relatives, including her parents and his father. During breakfast he got down on one knee, with a moonstone ring gifted to him for the occasion from a friend there.

They decided, just two weeks before, to get married on a Baha’i Feast day that fell on June 23. Saphira Rameshfar, a member of the Spiritual Assembly of the Bahá’ís of the City of New York, officiated at Brooklyn Bridge Park, before a dozen guests and their two miniature Australian shepherd puppies with Persian names, Peste (pistachio) and Anaar (pomegranate), while about 40 guests tuned in via Zoom.

“It was an hour of prayers, music and contemplation,” said Dr. Yazdanpanah, who chanted the poetry of Hafez in Persian, played the daf, a large drum, and his cousin played the kamancheh, a bowed string instrument. On July 23, they repeated their vows in the park before the bride’s sister.

The bride is taking the groom’s name.