Home » Fashion » A Married Name That Looks Nothing Like Us 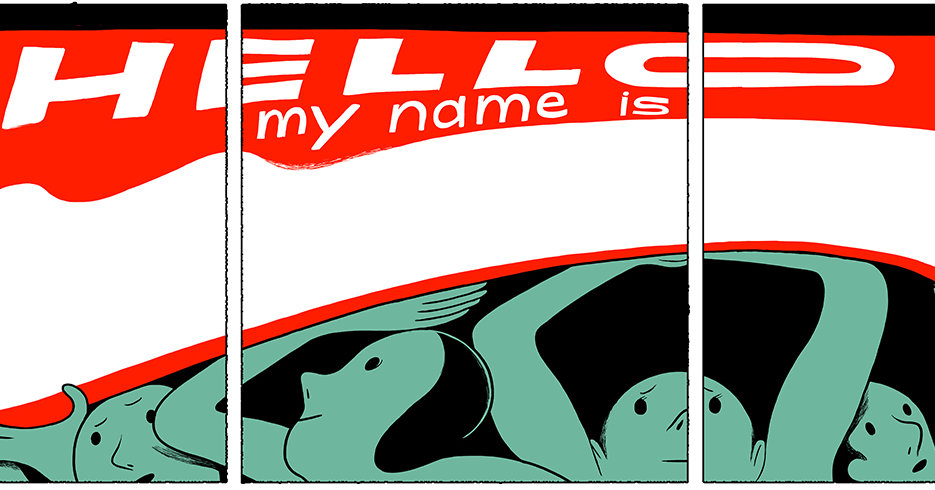 Eddie Obermueller thought I would take his last name once I became his wife.

I first showed my hesitation by joking that doing so would amount to an over-500 percent character count increase for me, Sally Ho.

But in truth, the name Sally Obermueller just felt jarring because it looked and sounded nothing like Phuong Ho, the name I had when I arrived in the United States as a 3-year-old Vietnamese refugee.

Compounding this identity crisis was the realization that my future husband’s very German-sounding surname looked and sounded nothing like him either. It had never bothered me in any way until, of course, it was about to become a part of my identity.

Eddie has always been a great match for me. He is handsome and has sexy shoulders. He is good with numbers, takes a problem-solving approach to life and does my taxes. I love his dry sense of humor and feel at home with him because he, too, has lived the Asian-American dream.

He was adopted at age 9 from a South Korean orphanage and raised by rural Catholic Wisconsinites. After we met, in Chicago, it felt as if we were destined to become the Asian Obermuellers, which was either the ultimate melting pot love story or the fraudulent fruit of assimilation between two immigrants.

Let me preface this by saying I had long anticipated the day I would marry the love of my life and willingly absorb myself into his identity. Some may see it as an old-fashioned or even oppressive belief, but feminist credibility was the least of my identity issues at this juncture of young adulthood.

Ever since I was a toddler playing wedding or mommy, I had looked forward to finding someone I loved so much that I wanted to be a part of him. The name change, to me, was not just tradition but also romantic, a beautiful symbol of the union we were committing to forever.

Yet, once I became engaged, I questioned that fantasy. While I adore Eddie’s big, rambunctious family and greatly respect my loving, hard-working in-laws, I initially struggled to feel attached to the Obermueller name because it didn’t feel properly attached to my fiancé.

As we talked through it, the official concern I relayed to Eddie was my established career as a journalist. We had been dating for five years at that point, but my career as a writer stretched twice as long. He accepted the explanation as logical and practical.

I also wanted to be honest about my feelings without hurting his. He seemed unfazed when I suggested it may be awkward to appear as “Eddie and Sally Obermueller” and morph into a singular identity that looked like neither of us.

Eddie responded just as casually: “What about our kids?”

We both remembered being children and grappling with our cultural identities.

Starting in my youth, I went exclusively by Sally as my “American” name. It’s a change many Asian immigrants make in order to assimilate to their new worlds. Having a Western name was a kind of status symbol in the ethnic enclave of Southern California where I grew up, where the prosperous and so-called model minorities aimed to set themselves apart.

A cascade of embarrassment would overcome me any time my “real” first name, Phuong, was discovered. The start and end of the school year served as the bookends to my self-consciousness.

My heart pounded as I spoke up at roll call on the first day of school to ask my teachers to call me Sally. And I would quickly and quietly cross out my legal name in yearbooks when the last day of school came near, replacing it with Sally and hoping those who flipped past the page wouldn’t notice.

And my last name was no cakewalk either. I was a girl taunted for being a “Ho.”

I couldn’t wait to shed for good the stupid jokes involving Santa Claus and prostitutes, comforting myself with the idea that I had a married name to look forward to. It was a Western tradition I was excited for, even though it’s not the norm in Asian cultures like mine.

Now that I was an adult, I felt much more conflicted. If I changed my last name, would my friends judge me for giving in to the patriarchy? Would it really be such a headache for our future family to have different last names at the doctor’s office, at the P.T.A. or on insurance claims?

Next, I turned to the name itself. Obermueller.

It was too long, had too many vowels and was too hard to pronounce. Taking it would mean a new kind of sticking out, and a new spiel to explain how I got here. It felt like a headache already.

If I had to have a white-sounding last name, why couldn’t the universe give me a more neutral identity, like Smith or Jones? Or better yet, why couldn’t I just have another, less funny-sounding Asian last name? Eddie’s birth name was Yongbae Choi. “Sally Choi” sounded so much more like me!

I asked him if he’d ever considered taking back his birth name, which he went by for nine years. Or did he ever think about mashing up the two and becoming Eddie Choi?

We knew of many Korean adoptees who had changed their names back in one form or another. They said it felt empowering to correct something they had no control over as children, and that it was equally important to finally have names that looked like them.

Eddie was not so resentful of his adopted name. He had considered it all but just didn’t feel the need to change anything about himself. Don’t forget, he said, adoption and immigration are legacies meant to last forever.

I blurted out some more hypothetical questions. Could he take my last name? Should we flip a coin for it? Was it ridiculous or emasculating? And was it a nonstarter to go by the portmanteau our friends had devised: The Hobermuellers.

Eddie let out a laugh, defusing the tension that perhaps existed only in my brain. “No way,” he said.

Then, somehow, we just never discussed it again.

If I was putting off the task, I wasn’t doing it consciously. Illinois state law helped facilitate this. After getting married in Chicago, I was allowed to simply begin assuming my husband’s name without petitioning the court in a separate process because our marriage certificate could serve as a legal name-change document.

This meant Obermueller was mine, as soon as I said so, if I said so.

But shortly after we got married, we were dealing with more pressing complications as our lives merged and changed together. We moved to another city, got new jobs, found new hobbies and planned for more trips. Instead of the hypothetical, planning phase of my marriage, I now felt busy in the work phase of living it.

And when I got pregnant, I experienced a transformational kind of love that bested even the most romantic notions of love I’d obsessed about when I was younger. However much I loved him for him, I loved Eddie more intensely now as the father of my child.

It never occurred to me that our son would take a last name that wasn’t Obermueller. At least not until the day this perfect baby was born and Eddie and I couldn’t help but laugh when we saw our son identified by the hospital as “Baby Boy Ho.”

Sally Ho is a journalist in Seattle.

Rites of Passage is a weekly-ish column from Styles and The Times Gender Initiative. For information on how to submit an essay, click here. ​To read past essays, check out this page.

Cardi B on Strict Parenting and Being a Sexy Mom

‘The Man Who Killed Hitler and Then the Bigfoot’ Review: Nuff Said
World News