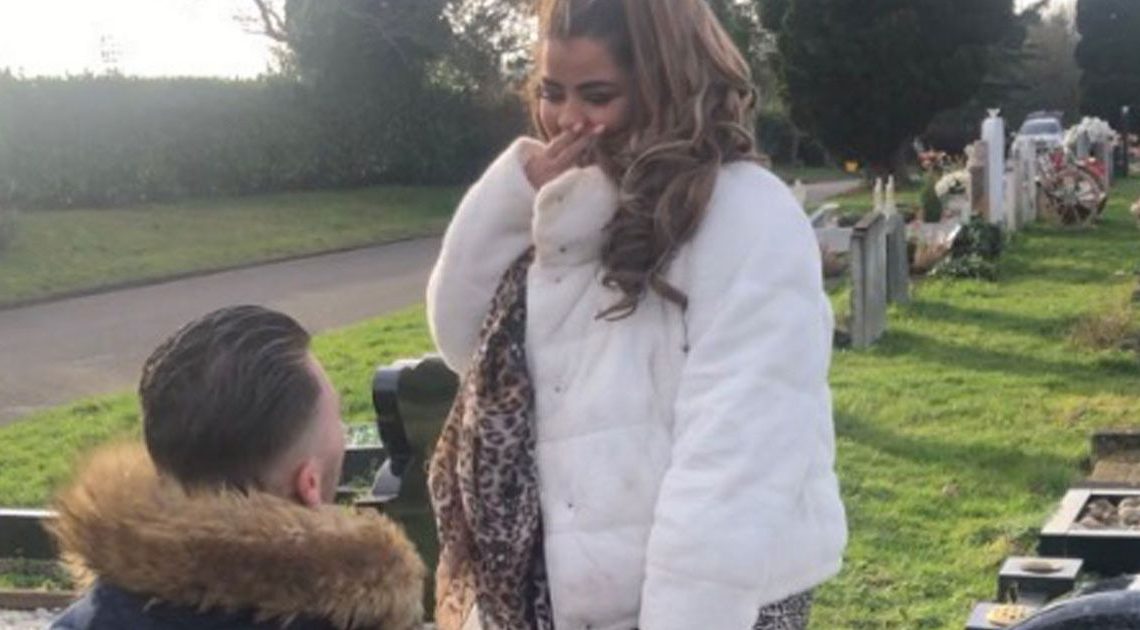 X Factor singer Scarlett Lee has announced she’s engaged to her partner of four years after he proposed inside a graveyard.

The 21-year-old reality star, who was one of the three finalists battling it out for the X Factor crown last month, announced her happy news with a sweet post on social media.

She revealed how Nathan surprised her by dropping down on bended knee besides the graves of her beloved grandparents, Benjamin and Daisy Brown.

"Omg! This just happened!! WERE ENGAGED!!!!" she wrote next to the cute snap.

The double-banded bling features two rows of sparkling diamonds surrounding an enormous stone in the middle.

The place Nathan chose to propose is very special to Scarlett, who lost both of her grandparents some years ago.

"Omg he knows how much I wished my granny and grandad was with me on my journey but this has made me feel the luckiest girl in the world! We are engaged!" she wrote alongside the picture.

On Boxing Day she shared pictures of their well-maintained graves, writing poignantly how much she missed them both.

"Every year I miss you .. but inside I’ve felt very broken today? Don’t know how don’t know why," she said at the time.

"I do because I miss you but today was hard .. hiding it in memories going through my brain … I just miss you I really do … another year without you and there was something so selfishly I wanted this year and that was you … after the year I’ve had I needed you … but you wernt there I know people loose people and it’s a part of life .. but today wasn’t the same and I haven’t been the same because of you .

"I love and miss you .. but I will be loving and missing you until the end of time I just wished I had you under the tree this morning," she added.

Scarlett and Nathan are childhood sweethearts, having got together more than four years ago.

He was with her every step of the way throughout her X Factor stint, cheering her on during the live shows and accompanying her as she travelled around the UK to drum up support.

Andrew Whitworth Had His Way With The Cowboys