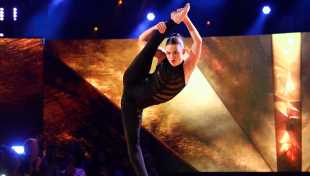 ‘World Of Dance’: Frontrunner [SPOILER] Shockingly Sent Home After The Cut Round

‘World Of Dance’ kicks off with the second round ofThe Cut tonight! Only the top 3 from the Upper Teams and Junior Division will make it through!

In this round of The Cut, the Upper Teams and Junior Division will have their shot at the Divisional Final! Ne-Yo is mentoring the Upper Teams while Jennifer Lopez is working with the Junior Division. First up was the Junior Division, which has proved itself strong early in the competition. Funkanometry went first and was ready to surprise the judges. The boys disappeared behind the judges to start off their routine, delivering a NASA-like, entertaining piece. “It was an entertaining, fun, innovative performance!” their coach J.Lo said. “You guys are becoming a favorite of mine!” Ne-Yo added. Funkanometry scored a 91.3, with a 93 from Ne-Yo and J.Lo, but an 88 from Derek Hough.

Frontrunner Lauren Yakima revealed to J.Lo that her dance is dedicated to her mother, who has lifted her up throughout her dance career. While Lauren struggled to get “real emotion” behind her routine, J.Lo helped her become more vulnerable. In a gorgeous red dress, Lauren let her emotions loose, clearly taking J.Lo’s advice. “I could tell the emotions were really real,” Ne-Yo complimented. Derek added there were a few wobbly moments in her turns, but he still loved the routine. Lauren received a 91.7, putting her to the top of the leader board, butt here’s still four more acts to go!

Moving 4Ward, the all-boys foursome, went next, and their choreo was lacking, according to the judges. The guys totaled a 90.3, putting them in third place on the leaderboard. Hip-hop duo Julian and Charlize went next. The duo are taking a page out of La La Land‘s book, to show a cat and mouse love story. Charlize & Julian were perfect together, right on point which each step. Oh, and in the end, he gets the girl! Think of Emma Stone and Ryan Gosling dancing hip-hop. “I really liked this routine… and that’s it.” Derek said. “It really, really was beautiful and you guys danced it amazingly,” J.Lo added. The duo shot right up to the top of the leaderboard with a 93.0!

Ballerina Kayla Mak is ready to fight for her spot, after coming back strong in the Redemption Round. Her routine, to “Take Me Church,” was strong and fierce, while also beautiful and contemporary, all while on point shoes! The judges loved it, cheering her on throughout. “This was about allowing myself to me myself,” Kayla told the judges after her performance. The judges were filled with compliments, Derek calling her “exquisite.” Kayla received a total of 93.7, sending her to the top of the leaderboard, knocking out Funkanometry.

Sisters Ellie and Ava performed for J.Lo before The Cut, but J.Lo didn’t understand the story behind their piece. The girls decided to dedicate the piece to their grandfather, who fought in Vietnam, and is coming to watch the performance. Using their white flag, Ellie and Ava portrayed a story of working together to get through anything. With flips and tricks throughout, Lauren Yakima watched on as her spot on the leaderboard was in jeopardy. In the end, Ellie and Ava received a 95.3, sending them to the top of the leaderboard and sending home frontrunner Lauren Yakima.

In the Upper Teams, the Exiles took the stage first, fresh off their Redemption Round win! When they met with mentor Ne-Yo, the guys were lacking confidence and had an unfinished routine. However, when they took the stage, the guys, rocking highlighter yellow, absolutely slayed their hip-hop routine, filled with flips and tricks. Ne-Yo told the guys that they seemed to have found their confidence and the judges agreed that they nailed the routine! The Exiles received a 90.3 to start off the night for the Upper Teams!

The Kings are back on the stage, and incorporating together Bollywood, Dubstep and crumping. Well, it works. The Kings literally brought something we’ve never seen before to World of Dance by combining all the different genres of dance and going airborne multiple times. “WHOA” the judges were left screaming with Derek jumping on the judges table. “It was insane!” J.Lo screamed. The judges scores reflect that, with J.Lo giving them a 99, Derek a 98 and Ne-Yo a 96! The Kings obviously went right to first place!

Unity LA is back with a beautiful routine to tell a story about growing older. Dancing with canes, the group delivered a strong performance. “It’s a huge risk to use a prop like that,” Derek told the group, but he said they did a great job. The judges gave the group a strong score totaling to a 93.3, putting them in second place.

Fuego Dance Crew took the stage next, dancing to “Gasolina” and delivering some epic Latin flair that made J.Lo swoon. While the routine was great, the choreography wasn’t as strong as the competition. “I feel like you guys have improved… but it gets a little elementary. The steps aren’t anything I haven’t seen before,” J.Lo commented. Sadly, Fuego received an 89.3 — not high enough to get on the leaderboard.

Radiance was next to face The Cut, and they revealed that their routine is dedicated to those affected by gun violence. Dancing to John Mayer, the ladies, were emotional, yet sharp and controlled with their routine. The judges did say they felt there were certain moments the ladies were not all together, and J.Lo added that the choreography could have been stronger. The scores for Radiance was still strong, with a 92.7, putting them into 3rd place.

The Heima, who usually dances with masks, has decided to remove their masks. The guys walked out with their faces covered with their hands. One dancer talked about his struggle with bells palsy, revealing the mask allowed him to just dance without insecurity. Without their masks, The Heima were just as strong and dynamic with their choreo! The judges were loving it! “It was a risk worth it, I love seeing your faces,” Ne-Yo told the guys. Derek gave The Heima a 98, J.Lo a 95 and Ne-Yo a 100! The Heima received a 97.7, tying for first place with the Kings. Sadly, this knocked Radiance out.

Next week, we have the Divisional Final, where all 12 teams will compete for a place in the World Of Dance finale!