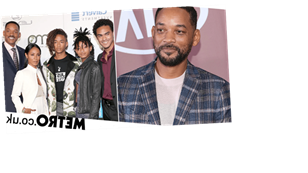 Will Smith broke down in tears as he recalled the moment he became a dad for the first time.

The Bad Boys actor welcomed son Trey with ex-wife Sheree Zampino back in 1992, before the couple split in 1995 after three years of marriage.

Two years later, he tied the knot with Jada Pinkett Smith, with the pair introducing son Jaden and daughter Willow together.

And, in a clip from the Father’s Day special episode of Jada’s Facebook Watch series Red Table Talk – obtained by TooFab – he opened up about becoming a dad when he was just 24.

Discussing bringing Trey home from the hospital, the 51-year-old admitted: ‘I think that was my first moment of the real weight of parenting.

‘We put him in the basinet and Sheree went to sleep and it was like stark terror, and I just couldn’t stop going and checking.’

Getting emotional, Will continued: ’I gotta make sure he’s breathing and all that new parenting stuff… I just cried so hard, it makes me teary right now.’

When asked what made him cry at the time, he said it was mostly feeling like he ‘can’t do it’ and that he wasn’t ‘the guy’.

‘Oh man, I’m gonna have to walk this one off,’ he joked while dabbing at his eyes.

The Men In Black favourite eventually called time on his relationship with Sheree in 1995 and, while his divorce was not official, he started seeing Jada soon after.

Speaking about their separation, he confessed their divorce was the ‘worst thing’ in his adult life.

‘With Sheree and with Trey, that was a really difficult time. Divorce was the worst thing in my adult life, divorce was the ultimate failure for me,’ he told Jada.

‘I’ve been hurt a lot in my adult life, but I don’t think anything touches the failure of getting divorced from my two-year-old son’s mother.’

Despite a rocky start, Sheree, Jada and Will are all on great terms, with the dad-of-three calling his ex ‘the best baby mama ever’ on social media.

Trey, 27, also remains close with his dad, joining the gang on red carpets.