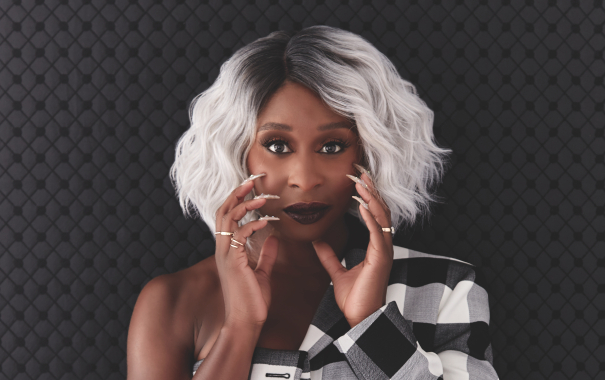 Steve McQueen’s female-centric heist movie Widows might be packed with familiar and accomplished women like Viola Davis, Elizabeth Debicki and Michelle Rodriguez, but magnetic breakout Cynthia Erivo still jumped off the screen in her first ever feature. Erivo is a storied stage actress, and has already won an Emmy, a Grammy and a Tony for her turn as Celie in the Broadway musical of The Color Purple. With Bad Times at the El Royale also on release this year, and with the lead role in the Harriet Tubman biopic Harriet currently shooting, Erivo’s rise shows no sign of slowing.

You shot Widows before Bad Times at the El Royale. What was it like walking onto set that first day?

I was definitely nervous because I’d never done it before, and I didn’t know what to expect. I wanted to make sure I was making a good first impression. I mean you’ve got Viola Davis there, and I don’t want to get it wrong. I was lucky because my very first scene was just me by myself with the woman who was playing my mother. So it gave me a little moment to ease in. But that first time we all got together, you sort of think, ‘Oh gosh, please, please let me do this well, please don’t let me embarrass myself,’ because it was one thing for us to come together before we started filming—which was really lovely and very, very necessary—but it’s quite another to then get onto the set and start working. Nervewracking, but a really good experience.

You’re really into fitness—what was it like to incorporate that into a role and to bring your physicality to it?

I thought it was really refreshing. I work out pretty hard, but for that I was trying to be really specific about that character, because I wanted it to feel like it was a natural everyday thing, that it came from necessity rather than vanity for this character. I loved the idea of being able to do that, but for it not to take anything away from her femininity. And that’s more due to Steve really being encouraging about the working out and adding things like the boxing. That wasn’t in the script before. It was a really good combination of womanhood and power at the same time—actual physical strength and femininity combined. I loved being able to be the representative for that. You don’t see that very often in films.

Steve McQueen didn’t consider anyone except you for the role of Belle. How did it feel when you found that out?

Crazy. I just didn’t know that he even knew about me, to be honest. To hear that he had me in mind the whole time was just a real source of validation of the work I’d done previous to this point. It meant that nothing was in the dark. For someone like him to want to pay attention to someone like me, it means a lot.

Your last three years have been busy for you. How have you felt, watching people discover your work?

I feel like I’m on an never-ending rollercoaster. It’s one thing after another, after another, after another. I’m just trying to make sure that I’m present for the good things, and I’m aware that they are good things. I’m happy and I have to remind myself that I’m happy. I have to remind myself that dreams are coming true, and as much of a cliché as that sounds, it’s the truth. So I think it’s important for me to note that. To see that and then to make new ones, which is really awesome to be able to do. I spoke to my mum yesterday, and told her what was going on, and she was in the middle of the street and she screamed. Something really great happened and you know, I forget that she’s paying attention, and she knows what I want for myself. So when I tell her a dream comes true it’s a massive deal, but I think because I’m in it, and I’m working in it, and I’m doing it, I sometimes forget how big a deal it is.

If you EGOT in the next seven years, you’d still be the youngest person to do so.

I’m definitely pinching myself and any time someone mentions the ‘O’ in the EGOT, I suppose I freak out just a little bit, because I don’t know that I expected to be that far along already. The idea of it still makes me giggle a little bit. I didn’t know that it was going to happen that fast. I didn’t know that it was possible. It’s really crazy to think that it might even happen, even in the next seven years, to be honest. You never know, if it happens, it would be absolutely wonderful.

There will be a musical film adaptation of The Color Purple stage play. If it happened, would you want to reprise your role?

To say that the show changed my life is an understatement. And at this point I’m so deeply connected to this play that it’s hard to separate it from me. I went to see the tour version, which was really lovely, but it was really odd to watch someone else doing it, because I felt like I had lived it already. I just know Celie inside out, you know? I feel like she’s inside my body. It would be like full circle, being able to show this version of the story that has been kept on stage for so many years. I think there’s something particularly special about the stage version, that people who haven’t seen it don’t know about. I just love it so much.

You’ve said you’d love to play Serena Williams. Have you met her, and did you discuss that?

I’ve met her but I haven’t talked about that. I think I was just too nervous. But I would love to, because I feel like she’s the perfect combination of power and strength and femininity all at once. There’s something about her I find really fascinating and amazing. She’s powerful and sexy and very intelligent. She’s amazing. You never know.

I mean so far, playing this role, it’s been one of the toughest I’ve ever done in my life, but I’m really grateful for it. From where I am standing, from the look on other people’s faces, from what people are experiencing, I feel like we’ve got something really, really special.

You dealt gracefully with negative comments about you being British and playing Harriet Tubman. It had to hurt to see that, though.

I do understand where some people are coming from, but I think that some of the ways in which people express themselves sort of disregard the fact that I’m human, so yes, they do hurt. But it’s not for me to put my focus completely on that because that would be doing a complete disservice to the reason I’m doing it. So I had to let it go, and realize the great thing at hand, and that is to tell the story of Harriet Tubman. And I think that had to have more importance than anything. In the end, it’s more fool me if I come out of this and I haven’t done a good job, and I haven’t told the story well. I would rather tell this story well, do it justice, and hopefully some minds will change. Yes, some minds will not, but I can’t focus too much on that now, whilst I’m in this. I want to make sure that I’m fully present for it. Genuinely, I don’t wish bad on anyone, so when I answer those questions with as much grace as I possibly can—that’s how it comes across hopefully—it’s because I don’t want to hurt anyone, I don’t ever want to be mean to anyone. That’s just not what I do.