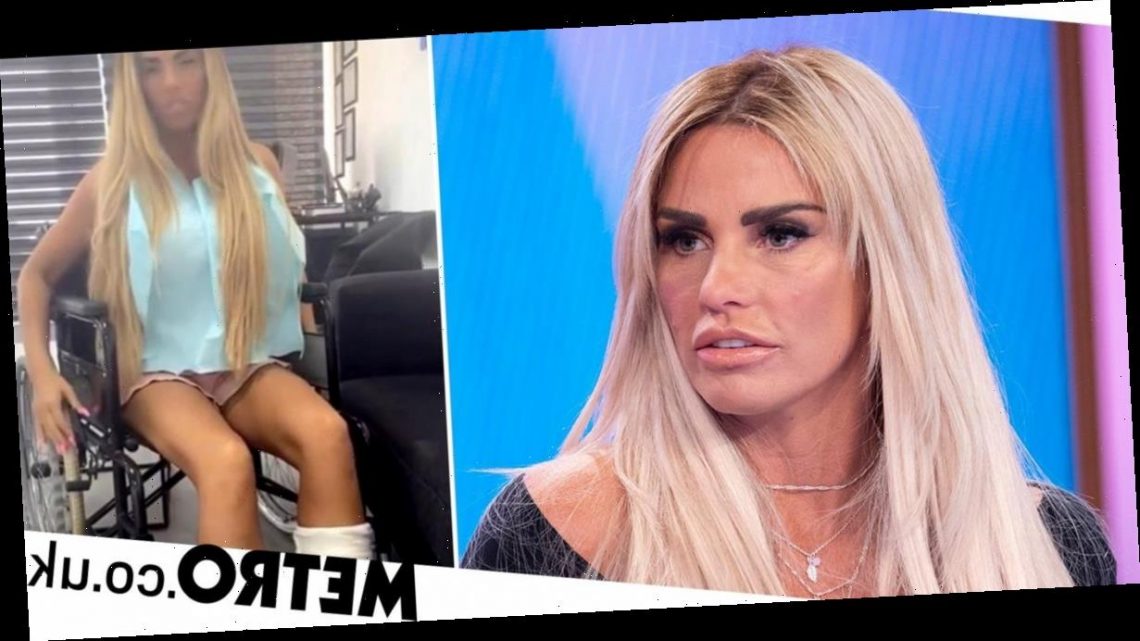 Katie Price has appealed to fans to acquire a mobility scooter for when she returns to the UK, after breaking both her feet on holiday.

Continuing a string of bad luck, the 42-year-old smashed her ankles and feet while at an amusement park in Turkey.

And taking to her Instagram stories, Katie pleaded for help while sitting in a wheelchair.

Sitting in the chair with both of her feet in casts, the mother-of-five said: ‘Hi guys! Does anybody know or could somebody get in contact where I can hire a mobility scooter and a wheelchair that I can use when I get back, because I’m not going to be able to walk.

‘Doctors have confirmed three to six months, could be longer. I need to get round on a mobility scooter and a wheelchair. Let me know, inbox me, thank you.’

Katie actually previously had a pimped out pink mobility scooter, purchased when she was banned from driving, but after taking it off road and bursting a tyre, it no longer works.

Katie revealed that she had suffered the painful injury last night, sharing a picture of her bandaged feet to Instagram and praising boyfriend Carl Woods for looking after her.

She wrote: ‘Yes it’s true I have broken my ankles and my feet , I have to have both feet operated on and pins put in been told I won’t be able to walk for 3 to 6 months , @carljwoods is being amazing looking after me ❤️❤️ #reallove #bestgentleman #wordscantdecribemyloveforhim #hismyworld.’

A rep for the star confirmed: ‘I can confirm Katie has incurred an injury.

‘It was sustained by her own doing when visiting a family amusement park with her children, Carl and friends.

‘Katie is expected to cut her holiday short and fly back to the UK for further treatment.’

A source claimed that Katie has suffered a hairline crack through both her heels.

The former glamour model had taken her children Junior, 15, and Princess, 13, on holiday to Turkey, along with her boyfriend of one month Carl, and had planned to take her other three children, Harvey, 18, Jett, six, and Bunny, five, on a separate trip.

However, those plans have been scuppered due to her latest accident.

It’s been a traumatic few weeks for the Price household, after Harvey spent a number of days in intensive care suffering breathing difficulties.

Then, Princess’s dog Rolo died in a tragic accident just weeks after she got the pooch for her 13th birthday, with the pet getting caught in the mechanism of an electric armchair.

Now, following her accident, it seems Katie is focusing on her new relationship to keep a smile on her face.

The star has set up a separate Instagram account for her and her boo, with the handle @adventuresofkatieandcarl, and has already shared a loved up selfie with the former Love Island contestant.

The pair were set up by a mutual friend in June, and sparks quickly flew.

A source told The Sun: ‘Katie wasn’t looking for love or a serious relationship but just weeks after meeting Carl, she fell head over heels for him.

‘She’s surprised how fast they clicked. He’s her ideal man, really: he’s got a job and his own money, he’s fit, they have a laugh – and she really fancies him.’