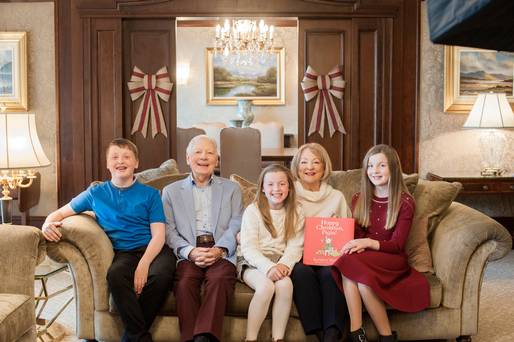 Like most grandparents, Gay Byrne and Kathleen Watkins are enjoying family life even more the second time around.

The legendary RTE broadcaster (84) has spoken at length about his wishes to have spent more time with his children growing up and less time at Montrose, but is cherishing every moment with his five grandchildren, while also expressing admiration at his children’s devotion to their young family. “I cannot get over the amount of time my son-in-laws spend with their children between rugby and GAA and hurling and dancing and fiddle…and the closeness they have,” he told VIP Magazine.

“Because when I was growing up, and I know it was another era, but to my father, I was kind of irrelevant. I was the youngest. He was in his 50s, he wasn’t a tough man or a bad man, I just didn’t register with him. And I never went anywhere with him. Children were intended to be seen and not heart, but now there’s such closeness.”

Gaybo and his wife of 54 years feature in the new edition of the magazine alongside three of their five grandchildren for a festive photoshoot at the InterContinental Hotel, and the former Late Late Show host offers insight into how children are treated today in comparison to his youth and therefore, how it informed his own parenting style. “I do [have regrets] because there are only brief snatches of them growing up that I do remember. But I’m in the same category as most men of my age,” he said. He went on to praise Kathleen, a best-selling children’s book author, for her support during his cancer treatment, describing her as a rock of strength within the family. “I am very lucky,” he explained. “But my daughters and son-in-laws have been wonderful too. We are very lucky because many people have nobody around.”

The last few years have been challenging in the Byrne household after Gay was diagnosed with prostate cancer in 2016 and while he’s grateful for the good health he had until then, he said he was ill prepared to be dropped into the deep end of a cancer battle.

“I had 83 years of robust good health. Maybe if I’d had poorer health I would have been better able to cope? Maybe I would have been more used to doctors and nurses and hospitals? I had no experience of that whatsoever, and suddenly you’re plunged into it overnight. And I couldn’t cope,” he said.

“However, we must remember that there are age-related illnesses and we have lived a very long and very comfortable life.”

This year, the family will be hosting Christmas at their home in Ballsbridge in south county Dublin.

Earlier this month, Byrne said RTE had asked him to return to the airwaves in January for his Lyric FM show, but the women in his life put their feet down and encouraging him to rest up at home.

“They just say I’m not up to it at the moment, and I suspect they may be partly right, but nonetheless I greatly regret that I can’t do it. It was my little outlet, that’s all. It was unimportant. It was only a Mickey Mouse radio programme on Sunday afternoon with a small listenership but it was an appreciative listenership. In fairness, it affects Kathleen as well, because it is her Sunday too.”