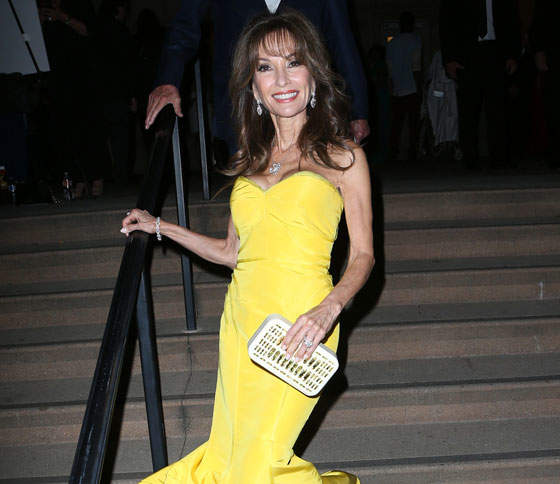 The cover of this week’s People magazine is all about wiping the stain from Duchess Meghan’s tabloid-given reputation of being difficult (I’m still waiting for Prince George’s rebuttal), but those not-knowing-messes buried the real story of the week. In the pages of this week’s People is the story we should all be talking about: the human ray of glamour-dipped sunshine that is Susan Lucci could’ve died last year!

The 72-year-old Empress of Soap Operas tells People that last year, she nearly floated off to heaven, where she’d eventually star in every angel’s favorite daytime soap opera with Kristoff St. John. On October 23 (that was a Tuesday), you may have felt a pain in your chest. No, it wasn’t heartburn from you eating a bag of the candy you bought at Target to give out to trick-or-treaters. It was your body reacting to the world almost losing an international treasure. Susan Lucci says that last fall, she started experiencing tightness on her chest, and she ignored it until October 23, when she says it felt like “an elephant pressing down” on her chest while she was shopping at Tory Burch in Manhasset on Long Island (La Lucci may be down and out but she’s still getting that plug in because even a rich queen like her could use a discount). The manager at Tory Burch offered to drive her to a nearby hospital, and while on the way, La Lucci called her husband’s cardiologist Dr. Richard Shlofmitz, and he met her at the ER.

After getting a CT scan, Dr. Richard told her that she had 90 percent blockage in her heart’s main artery, and 70 percent in another branch. She underwent emergency surgery where Dr. Richard put two stents into her arteries to increase blood flow to the heart. She was told that if she never did anything about it, she’d eventually suffer 100 percent blockage, which could’ve led to a massive heart attack, which could’ve led to us living in a Lucci-less world.

La Lucci is as light as a butterfly’s whisper, and she eats healthy and regularly does pilates, so she never thought she was at risk for heart issues. But she inherited it from her family, her late father had a condition that causes plaque build-up in the heart and he suffered a heart attack in his 40s.

“As a woman you think about breast cancer, not a heart attack. Every EKG I had was great. My blood pressure was on the lower end of normal. We often put ourselves on the back burner. But if your body is telling you something, we need to pay attention.”

La Lucci is now a spokesperson for the American Heart Association’s Go Red For Women campaign and is speaking out to help others. There was no damage to her heart and it’s working as good as ever.

It’s a good thing that I read that La Lucci’s heart is working, because if I didn’t, I would’ve taken a Frontiers flight to New York to go to her cardiologist’s office and offer to donate my heart to her. I would’ve wasted 96 hours (which is how long a Frontiers flight from California to New York takes including cancellations, re-routes, delays, etc), because her cardiologist would’ve said to me, “Err, you kind of need a heart to donate your heart.”