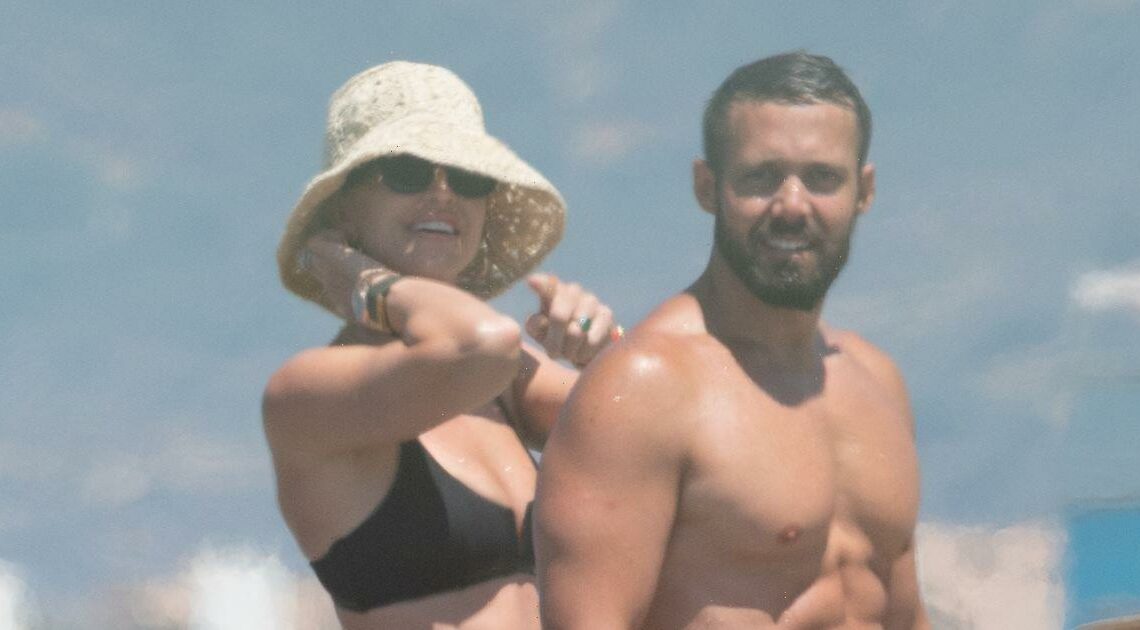 Vogue Williams flaunted her sculpted legs and washboard abs in a chic black bikini as she enjoyed a beach day with husband Spencer Matthews in Costa del Sol, Spain.

The star, 36, looked bronzed as she soaked in the sun's rays while wearing a straw bucket hat paired with sunglasses, hoop earrings, and of course her gorgeous wedding ring.

While former Made In Chelsea star Spencer, 33, wore light-coloured beach shorts as he also displayed his impressive physique.

The couple married in 2018 and have three children together; Theo, three, Gigi, one, and newborn baby Otto, who arrived on Wednesday 20 April.

The Irish model wrote: "We are so happy to announce that our beautiful boy arrived safely on Monday evening. Bursting with love he is the perfect addition to our family."

However, it doesn't look like the pair will be stopping at just three children, after Vogue expressed her desire to add to her brood when she was pregnant with her third child.

The 36 year old previously said: “The plan is definitely to have more kids. The dream would be to have four.”

A source also backed up Vogue's comments, as they said to OK!: “She’s [Vogue] making up for lost time.

"She wants to expand their family further as soon as she can. She and Spencer are a really great couple but she’s very conscious that time is ticking.”

In 2020, when the couple were only parents to Theodore, Spencer also said that they would like "three or four kids".

Spencer recently made an X-rated confession about his and Vogue's sex life, confessing that they have done "all sorts of weird s**t together", including having sex in a sauna.

The former Made In Chelsea lothario made the comments on his and Vogue's popular podcast, Spencer & Vogue.

Vogue read out a fan question which asked: "What's the strangest activity you've ever done together?"

Spencer replied: "We obviously can't talk about that on the pod."

Trying to divert from the question, Vogue said: "I don't think we've done anything that strange."

Spencer wasn't having any of it though as he said to his wife: "We've done all kinds of weird s***. What are you talking about?"

Vogue again tried to deflect, and asked: "Like what?" before Spencer revealed: "We have sex in public places."

Spencer replied: "In the sauna."

Vogue then coyly admitted that it was in fact true, however, she said: "That's not a public place," to which Spencer suggested: "Well it kind of is, anyone can walk in."