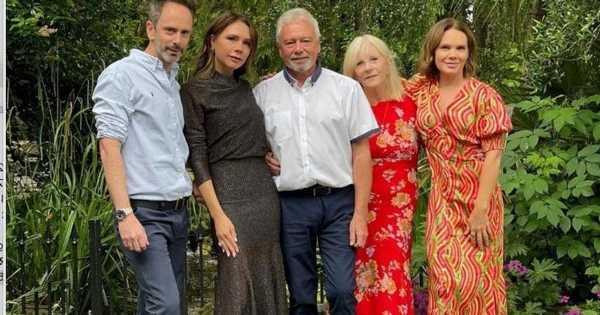 Victoria Beckham has shared a photo of her parents and siblings, as well as her rarely seen brother.

Former Spice Girls star Victoria, 47, gave a rare insight into her family as she marked her parent's 50th wedding anniversary.

Victoria posted the photo on her Instagram page, which showed her stood next to her mum Jackie, dad Anthony, sister Louise and brother Christian, who stays away from the public eye.

She gave a small smile as she stood next to her brother Christian, who wore a blue shirt and navy chino trousers.

Stood on the other side of Victoria is her smartly-dressed dad Anthony, who is wearing a white shirt and blue trousers.

As Victoria, who recently shared her favourite Spice Girls memory, shared the photo with her 29 million Instagram followers, she gushed over her parents.

"So inspiring, 50 years, wow!! We love you so much and so happy we finally got to celebrate as a family" next to two pink heart emojis.

Victoria admitted she had missed spending time with her family as she ended her caption with: "I’ve missed this time together so much!"

Some fans were even left shocked as they discovered Victoria had a brother, which they expressed in the comments of Posh's post.

One confessed: "Never knew she had a brother." Another added: "Damn @victoriabeckham i didn’t know ur brother was so handsome why did u hide him all these years lol".

While a third pointed out: "Wow Brooklyn is so like his uncle."

Christian lives a very low-key life and is rarely seen in public. He has four children with his wife Emma and is said to have remained close to Victoria and Louise over the years.

He was last publicly pictured with his sister Victoria at her 46 year old husband David's Haig Club House Party in 2018.

Victoria has been spending plenty of time with her family of late, as they also gathered to celebrate David's mum Sandra's birthday earlier this month.

She marked the occasion of a photo of herself with David, his younger sister Joanne and Sandra.

Poking fun at her pose in the image, as she is holding up her hands in a peace sign gesture, she wrote in the caption: "Who do you think was the drunken Beckham here?? Spice up your life, take a leaf out of your daughter in law's book and have a glass of wine (or a Cointreau!) to celebrate today".

How To Recreate Santana’s Makeup Look From Glee