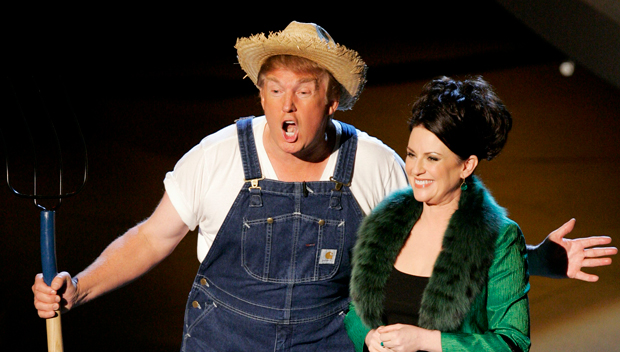 In honor of signing the farm bill on Dec. 20, Donald Trump tweeted a throwback of him paying homage to America’s favorite pair of farmers from ‘Green Acres.’ Not everyone appreciated the trip down memory lane!

Farm bill signing is the life for President Donald Trump, 72, as he demonstrated with an interesting choice of tweet! Fifteen minutes before signing the farm bill at the White House on Dec. 20, the POTUS celebrated the occasion by tweeting a video of him singing the theme song of Green Acres with Megan Mullally at the 2005 Emmy Awards. Yes, Trump really got into a pair of overalls, pitchfork and all, while belting out how farm livin’ is the life for him…but many on Twitter didn’t appreciate his attempt at humor.

“I thought this was the parody account. I can’t tell the difference anymore,” Twitter user @Cedarflame wrote. Some people thought the video belittled farmers, as @sweatt_jeanne tweeted, “This country s [sic] demeaning. Farmers deserve more respect. We are in reality not on a show.” Some users even posted GIFs of various characters, like Homer Simpson, dousing their eyes with various substances. And user @houseofwachs took a jab at the border wall Trump has pushed for, tweeting, “Can you sing Another Brick in the Wall when that gets done?”

Megan, who took the stage with Trump in their farming get-up at the Emmys, also didn’t appreciate the throwback. “Omg,” the comedian tweeted, and then wrote, “If you guys need me, i’ll be in a hole in the ground 😵💀👋🏽.” As for why Trump tweeted the video in the first place, he just passed legislation that “reauthorizes crop insurance and conservation programs and legalizes the cultivation of industrial hemp,” per the Associated Press.

Trump took the Emmys stage in overalls as part of the award show’s skit competition called “Emmy Idol.” Trump’s show at the time, The Apprentice, was nominated for best reality competition that year…but it doesn’t look like he’ll be getting any nominations for today’s tweet.