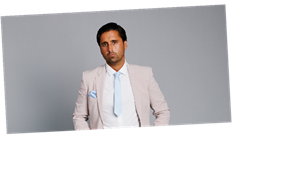 Liam Blackwell, or Gatsby as he is known on The Only Way Is Essex, first burst onto our screens on the reality show in 2015, and has since become a staple on the ITVBe series.

Over the last five years, we have seen the 32 year old wine and dine his co-stars with extravagant dates, including taking Ferne McCann in a helicopter for their first date.

Now, the rapper is swapping the Essex dating scene for London, as he stars on MTV's Celeb Ex In The City, which is a spin-off to the successful Ex On The Beach.

The reality star, who went on another date with Ferne in 2019, spoke exclusively to OK! Online about what he is looking for in a woman and what his idea of a perfect first date would be.

"If I had to pin-point a type, it would probably be a Latin sort of look, similar to me, the tanned skin and the brown eyes," he explained.

"But if I look back on my history of girls I've dated, it's nothing like that. For me, it more about if I click with them and the personality of that person really."

Gatsby went on to explain that he considers humour to be an important thing when dating someone and enjoys laughing with them.

"I like to have a laugh and I don't take myself too seriously, so I need someone who's able to have a laugh. Plus the person has to be really loyal and trustworthy," the Essex native revealed.

The musician likes to live an extravagant lifestyle, as we have seen him be driven in fancy cars and wear expensive suits on TOWIE, thus enjoying the finer things in life.

When asked what the most extravagant thing he's ever done for a woman is, Gatbsy responded: "I bought my ex-girlfriend a car because she needed one.

"I'm quite generous in a relationship, and quite romantic. I also took Chloe Sims on a yacht on TOWIE," he added.

The television personality, who posed naked with his co-stars to raise awareness for men's mental health, also shared what his idea of a perfect date would be.

"My go-to date would be to go for a nice meal up town, a nice bottle of champagne and then once your in the mood, go to a club, have a party and then it always ends well if they end up back at yours. That would be ideal," he divulged.

CELEB EX IN THE CITY PREMIERES TUESDAY 8TH OF DECEMBER AT 9PM ON MTV!