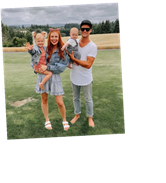 How’s this for some rich irony?

July Fourth is a holiday that celebrates the independence of America, which, of course, was the result of winning a war against Great Britain.

And now? Within the confines of the Roloff family?

There appears to be a different kind of war brewing, and its most recent casuality was a party held in honor of — you guessed it — July Fourth.

This past Saturday, Jeremy and Audrey Roloff hosted a gathering for friends Erica Rose Meichtry and Destiney Mueller, who are also acquaintances of Zach and Tori Roloff.

As you can see above and below, good times were had by all in attendance at Jeremy and Audrey’s place in Helvetia, Oregon.

But as you can also see above and below…Tori and Zach were nowhere to be found.

“Happy 4th of July!!! So grateful to live in the land of the free because of the brave. God bless America,” wrote Audrey as a caption to these snapshots.

She didn’t mention Zach and Tori and we don’t know whether they simply weren’t invited — or whether they were invited and snubbed their supposed loved ones.

“Always one of my favorite weekends of the year,” wrote Audrey, seemingly taunting her in-laws.

This story seems especially relevant at the moment because Tori accidentally confessed just the other day that her baby daughter had never met Audrey’s baby son.

Despite the two being cousins. And despite their parents living in the same state.

Moreover, Audrey has been at odds with brother-in-law Jacob of late, as the latter has strongly condemned the former for her passive reaction to the Black Lives Matter movement.

Actually, it’s more than that.

Audrey simply cited a passage from the bible in the wake of George Floyd’s death at the hands of a white police officer.

She probably thought she was being all profound and helpful by doing so.

But Jacob has been attending rallies and protests and indirectly trashed Audrey a couple weeks ago for her “empty gestures and fancy platitudes.”

Then, earlier this month, Audrey took a lot of flak from critics who were aghast that she seemingly shed her principles in order to promote the brand Mr. Clean.

And this gets to the crux of what many folks find to be such a turn-off when it comes to Audrey Roloff.

They think she acts all high and mighty and special and all-knowing and religious… when, in their views, she’s really just a sell-out who will go against her own views at any time to make a quick buck.

But there’s clearly tension between Audrey and the Roloffs.

Tori, it should be noted, is considered to be a sincere and kind person.

She would never aggressively or outwardly trash her sister-in-law. We shouldn’t expect Tori to fan any flames of a feud any time soon.

But this is worth keeping your eye on, almost literally.

Continue to take a look at Audrey and Tori’s Instagram pages in the days and weeks ahead and see if you spot any photos of the other one on there.