Home » Celebrities » Tori Spelling Posts Rare Pic of Kids: My Marriage is Over But My Family is Okay! 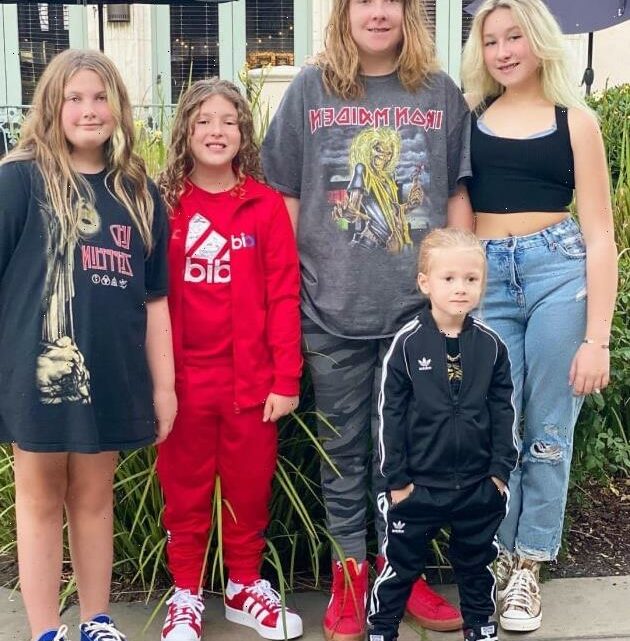 Tori Spelling Posts Rare Pic of Kids: My Marriage is Over But My Family is Okay!

The world is all too aware that Tori Spelling and Dean McDermott’s marriage is over.

If Dean weren’t too broke to move out, they wouldn’t be in limbo like they are.

But not everything is bad in the Spelling-McDermott household.

Tori has shared a rare photo of her five children together, and they’re growing up so quickly!

This is our first look at her children in a group in a while, and they’re growing up before our eyes.

Two of them are now teenagers, a fact that is not lost on Tori.

“My babies are so grown up…” Tori gushed.

“5 pairs of new shoes,” Tori listed. “All Back to school clothing ( mostly ) bought.”

“Almost all 5 kids looking at the camera,” Tori quipped.

“Feeling good about them all headed back to in person school in 2 weeks,” she wrote.

Tori then added: “(well aside from 4 separate schools to do drop off/pick up this year)”

She also shared that they were: “Dining at our fave family restaurant @kingsfishhouse.”

Presumably they were at least a party of six unless Tori’s five children were dining at their own table, but we get the idea.

One imagines that Dean could also have been present.

But he and Tori aren’t exactly appearing on each other’s Instagram accounts these days.

They haven’t for some time. Tori even wiped “wife” from her bio. That was a conscious, deliberate choice.

Tori has also straight-up acknowledged, to the outside world, that she and Dean don’t share a bed.

At the time, she sought to minimize it, saying that it was a practical move related to their children and pets.

But she and Dean also have not been seen wearing either of their wedding rings in months.

Then, of course, came the reports.

Dean had been working in Canada for a time, which we all knew.

According to various reports, as we previously covered in detail, Dean returned to be greeted with bills to pay.

It is reported that a major point of contention for the couple was the number of family pets.

Combined with five children, those are a lot of mouths to feed — and a lot of bills.

Apparently he returned and was fully prepared to end the marriage.

However, this financial point of contention is also an obstacle to actually taking the steps to get divorced.

Dean will have to move out to file for divorce, and moving out costs money … money that they do not have to spare.

Additional reports have described an added layer: Tori allegedly fears that Dean is cheating on her.

He has cheated on her in the past, so this is far from an irrational accusation.

But it is claimed that false accusations of cheating drove an additional wedge between them.

Lindsey Vonn, 36, Uses Her Toned Arms, Legs, And Booty To Crush A Tire-Flipping Workout In A New Instagram
World News