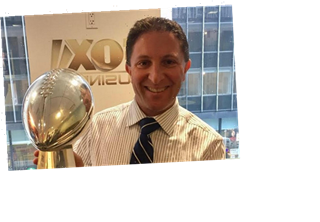 Eric Spinato, Fox Business Network’s senior head booker and senior story editor, died of COVID-19 Sunday, according to a social media post from his brother. Fox News Media confirmed his death to TheWrap Tuesday. His age was not given.

“I love you bro. You were my rock. COVID took my brother today. He was a gem and one of a kind. I’m so broken and lost for words. This man was an amazing father, brother and friend. I’m sorry to say this but this day broke me hard. I will make you proud for the rest of my life. RIP Bro,” wrote Dean Spinato in a Facebook post first reported by CNN.

In an internal memo reviewed by TheWrap, Fox News Media CEO Suzanne Scott, Fox News president Jay Wallace, and Fox Business president Lauren Petterson echoed the sentiments of Spinato’s brother, calling the longtime employee’s contributions to the company “immeasurable.” They added that Spinato, who started at Fox News in 1998, was “instrumental” to the channels’ growth, as well.

“Eric was an immensely gifted and aggressive booker and was renowned for booking the innumerable ‘gets’ we’ve seen on both FNC and FBN over the years. He was also always willing to lend a hand to help a colleague, mentor union staffers or troubleshoot an issue — countless bookers throughout the industry learned the ropes and the tools of the trade from Eric at one point or another in their careers,” said the note to staff.

On social media, some of those who had worked with Spinato at some point in their career also posted tributes.

“Please pray for the family of Eric Spinato. This is a sad and tragic loss for the Fox family. I worked with Eric after college, and he was wonderful. Sending prayers,” wrote former White House press secretary and current Fox News contributor Kayleigh McEnany.

Fellow former White House press secretary and former Fox News contributor Sarah Huckabee Sanders also memorialized him, writing, “So sad to hear about Eric Spinato. I’ve worked with him in one way or another for nearly a decade. Always a professional and good to everyone around him. My prayers and condolences to his family.”

Her father, former Arkansas governor — who is also a Fox News contributor — tweeted, “Stunned by the news that Eric Spinato, long-time booker at Fox News & Fox Biz died over the weekend from Covid. I’ve worked with him since 2008. Always the gentleman. Pro at his job. Kind to all. Condolences to his family.”

Watch Fox Business Network’s tribute to him above.