Home » Celebrities » Tommy Lee Finds It Too Embarrassing to Stay in the U.S. Should Donald Trump Get Re-Elected 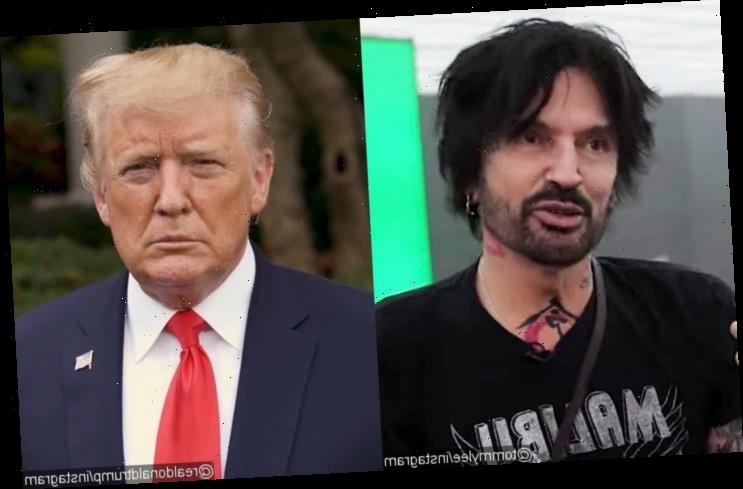 Tommy Lee Finds It Too Embarrassing to Stay in the U.S. Should Donald Trump Get Re-Elected

Believing that Trump makes the other countries think less of America, the Motley Crue drummer vows to go back to his homeland, Greece, if POTUS wins a second term as president.

AceShowbiz –Tommy Lee makes it pretty clear that he has no love for Donald Trump. Having been a vocal critic of the 45th President, the Motley Crue drummer now suggested that it would be too embarrassing to stay in the United States if the former businessman wins a second term as president in the November 2020 election.

In the candid interview with The Big Issue, the 58-year-old rocker was asked to imagine another four years of Trump in the White House. “Dude, I swear to god if that happens then I’m coming over to visit the UK. I’m out of here,” he responded. “I’ll go back to my motherland, go back to go Greece and get a house on one of the islands.”

“The thing that stings the most is that I feel like we’re embarrassing,” the ex-husband of Pamela Anderson further confessed. “I feel like people in Europe and the rest of the world look at America and think: ‘What the f**k are you guys doing over there? Stop voting for celebrities and get someone real to run the country.’ “

Tommy’s pledge came just weeks after he reacted to the POTUS’ announcement that he and his wife Melania Trump had tested positive for coronavirus. “Can you say ‘Karma Gods have spoken’?” he tweeted shortly after the country’s leader shared, “Tonight, @FLOTUS and I tested positive for COVID-19. We will begin our quarantine and recovery process immediately. We will get through this TOGETHER!”

The Methods of Mayhem founder’s outspokenness about the POTUS has not been always met with support from his fans. In fact, he divulged back in June that many of them who are Trump supporters have demanded him to “shut up and play the drums” when it came to politics.

“Motley fans range from all kinds of colors, types, races. There’s also a bunch of Trump-supporting fans. I don’t know why, but there are a lot of them,” he told Alternative Press. “And I’m not allowed to have an opinion, because I get told by fans, ‘Shut the f**k up and just stick behind the drums’? That irked the f**k out of me.”

“I’m sure that me personally, I’ve lost some fans. And you know what? On the flipside of that, I probably gained some,” he continued explaining his stance. “It’s a weird thing to talk about. But, you know, at the end of the day, it’s just a f**kin’ opinion. People just cannot take it. You take it, keep it moving or f**king unfollow. I don’t know what else to say.”