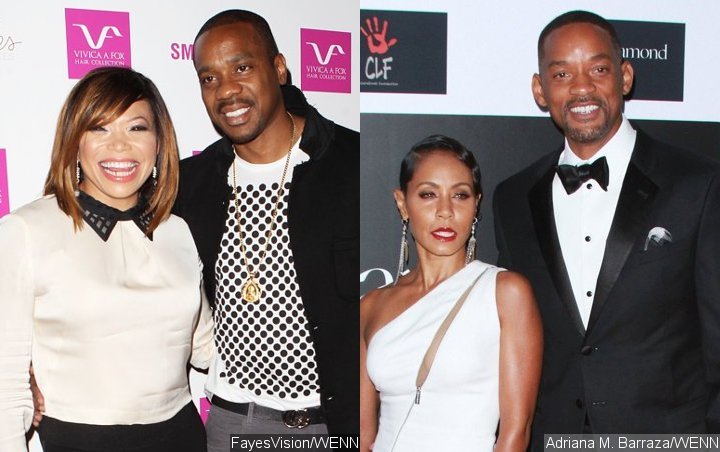 AceShowbiz –
Tisha Campbell‘s estranged husband Duane Martin has been accused of hiding money for multiple sources for years following the couple’s bankruptcy case. According to new legal docs obtained by TMZ, the new bankruptcy case may get Will Smith and Jada Pinkett Smith involved.

Bankruptcy official reveals that Duane had hundreds of thousands of dollar he’d been hiding even though he and Tisha filed for Chapter seven bankruptcy in January 2016. It is said that the money is coming from a clothing store and a real estate investment. Duane, however, didn’t disclose that info in bankruptcy documentation.


The new report further claims that Duane used a $1.4 million loan he got from his friends, which turned out to be Will and Jada, through their company. He reportedly used the money to buy a home and sell it later from which he would get a million dollar profit “with the intention of pocketing the sales.”

It’s said that the officials started to feel suspicious of Duane’s financial after Tisha filed for divorce from him in February. It didn’t took long for them to discover that Dueane “concealed” and “diverted valuable assests” when filing for bankruptcy.

Duane is now demanded to turn over the cash he’s been hiding as the officials are now asking for Duane’s discharge of debts to be revoked.

In addition, Tisha is also demanding some money from Duane. She claimed that he hid money during their marriage. According to a source close to Tisha, the “Martin” star had tried to convince Duane to tell the truth. However, she eventually was forced to reveal her findings to “avoid jail and be there for their two children.”

As for Will and Jada, the officials reportedly haven’t accused them of any wrongdoing, though they noted that the loan made up parts of a larger “sham” by Duane.