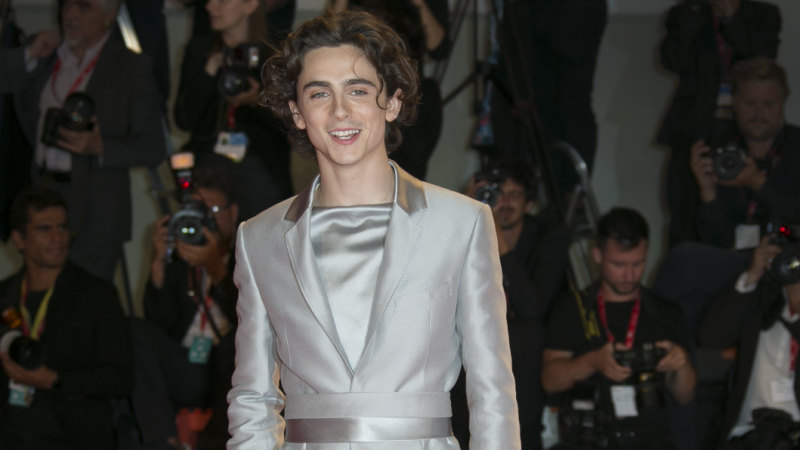 Hollywood it-boy Timothee Chalamet sparked a sensation at the Venice Film Festival this week where his new Netflix film The King – written and directed by Aussies David Michod and Joel Edgerton – had its much-anticipated premiere.

Strolling onto the red carpet, looking like alt-Malcolm in the Middle, the 23-year-old cut an eye-opening figure. And by eye-opening, I mean he looked ridiculous. 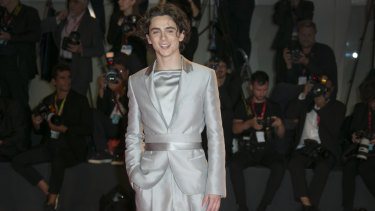 I've spent hours, days, looking at that image with such joy. Chalamet looks like a nervous teen who dressed up as Berlin-era Bowie for his school formal. He looks like Tilda Swinton got a case of the Benjamin Buttons. The. Belt. Is. On. Top. Of. The. Blazer.

To an extent, I understand; odd is at least interesting. Also, I don't wear blazers – they're for waiters, bail applicants and early-oughts rock stars – but, considering Hollywood's sartorial influence, in a few years I may be wearing satin belts on top of my hoodies like it's nothing. But for now, are we really just going to let Chalamet get away with this?

If nothing else, the outfit should earn him instant entry into this decade's celebrity cringe hall of fame. Chalamet, meet your fellow honourees:

In 2013, while on a promo trek in South Korea, the British star – best known as Marvel's Loki – kicked back a chair to reveal a hidden skill: the twirling, high-stepping, hand-jerking dance repertoire of a late-'90s boy band member. The viral video saw Hiddleston turn dancing monkey on late-night talk shows for much of the decade, much to the joy of the internet's GIF-makers.

The 48-year-old Oscar nominee has long held a secret side-gig as an aspiring musician; that it took him until last month to officially release his debut single might reveal a bit about the quality at stake. Heaven Don't Have a Name, a pumping rock-ballad led by Renner's pained vocals, was quickly described online as "quite possibly the worst song of 2019". In a year that's featured Ed Sheeran collaborating with Justin Bieber and Eminem, that's saying something.

While holidaying in Hawaii in 2016, paparazzi captured something unexpected about Affleck: he has a giant phoenix tattooed across his entire back. Those unfamiliar with Affleck's film choices (see: Gigli, Reindeer Games, Man About Town et al) suddenly questioned his taste – even his ex-partners Jennifer Lopez and Jennifer Garner publicly mocked it – but Affleck defended the ink in an interview with Ellen in May, saying: "It's meaningful to me." I believe that meaning is: "Here's your reminder to stay sober."

Either way, it makes a shiny belt look like kid's play. Good start, Chalamet, but you've got a ways to go.

Billie Eilish on Being Slut-Shamed Over Big Boobs: That Is Stupid